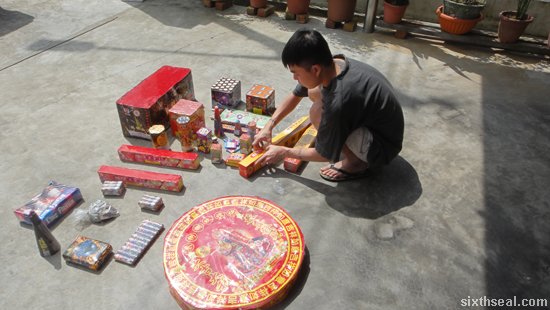 Yes, it’s that time of the year again! 🙂 This is the annual Chinese New Year fireworks and firecrackers roundup for 2012. There’s a lot of quirky fireworks this year – gift hampers, old firecrackers which I haven’t seen for decades and fountains which goes up over one and half storeys high! 🙂 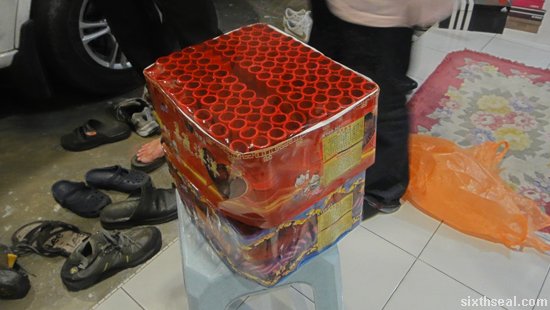 Sibu has a fine selection of retro firecrackers and fireworks this year. However, the ever popular multishot fireworks cake barrages are the most prevalent and there are multiple places selling it openly…in the morning, despite the massive RELA and police presence due to the recent murders. Well, that’s Sibu for you. 🙂

All Chinese to English translations kindly furnished by my dad. 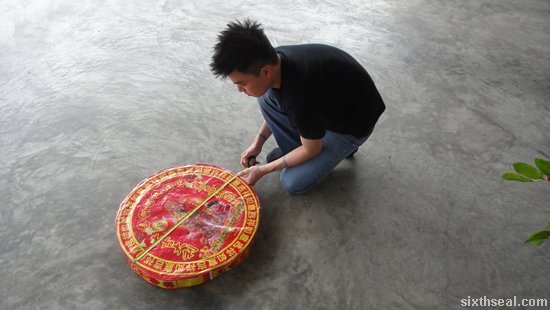 We have here one of the old skool Chinese firecrackers – the extremely noisy ones than produces massive amounts of smoke and tons of red paper. 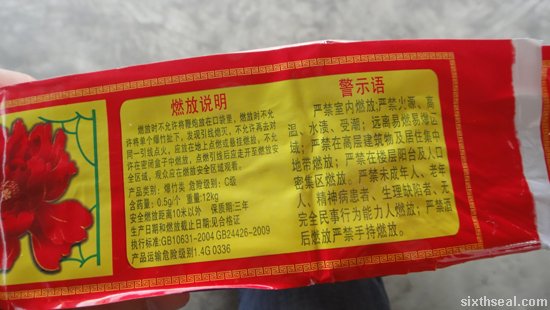 This weighs 12 kgs and is unique in the sense that it has a large firecracker braided *on top* of two rows of smaller firecrackers, making a formidable stack of 3 in the string. 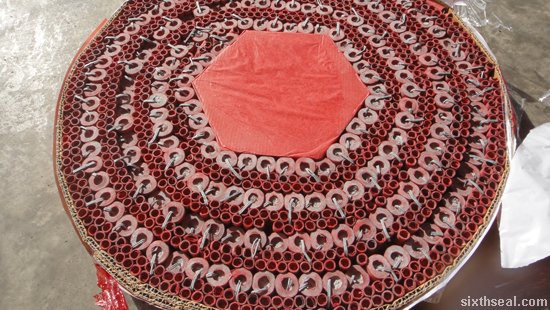 However, I can’t bring myself to use the word “smaller” with this since even the smaller firecrackers are about 6 times the size of Shun Lee Hung firecrackers. 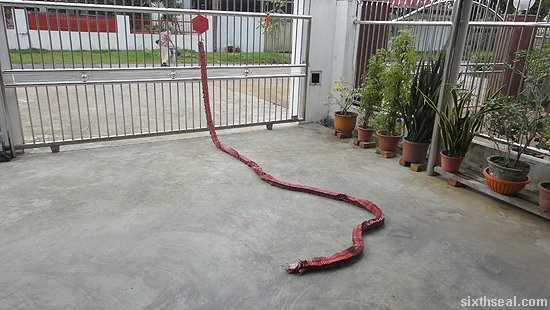 See the grandma walking past? She was followed by a woman who told her in Hokkien “Ah Ma walk faster, he’s letting off the big firecrackers.”

…and being the neighborly sort I told them not to worry, I’ll let them pass before I light it and CNY greetings were passed. That’s the spirit! 🙂

I was standing quite far away (about 2-3 meters) coz my dad was holding the digicam and I had to walk back to him, but some of the firecrackers went past me, showering me with Chinese New Year cheer (and the possibility of grave eye injury). I like! 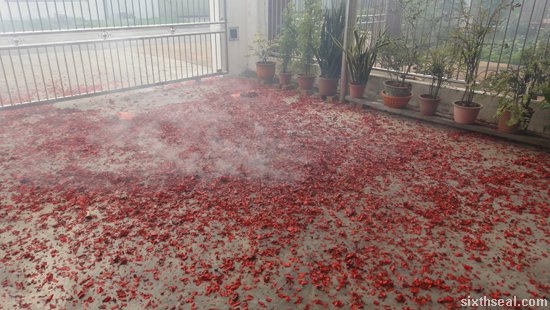 It was still smoldering on the ground after it finished its barrage. I let this off on the morning of the 1st day – woke up early just to do this. 😀 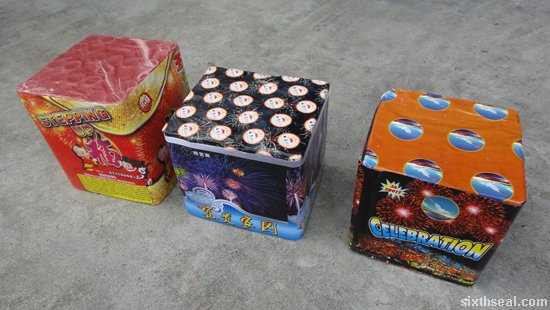 These are the aerial firework barrages which comes in a “cake” configuration. It has several tubes which launch the projectiles into the air. It’s very popular in creating a sustained barrage (which is why some people call it that) of aerial fireworks and depending on the artisan’s imagination, can range from being mundane to impressive.

However these things has two major flaws:

It is advisable not to let these off during high wind conditions. The initial propellant that shoots up the shells sends it from 75 – 150 feet (depending on the primer). However, the aerial shot itself is quite light and wind can send it in a totally unpredictable direction (usually diagonally) and limit its apogee, which can be quite disastrous. I’ve seen one send shots that explode 12 feet above and let me tell you, that is quite an experience since it’s supposed to go off 10 times that distance.

It had us all watching nervously and asking if anyone has a fire extinguisher and telling cars not to pass. 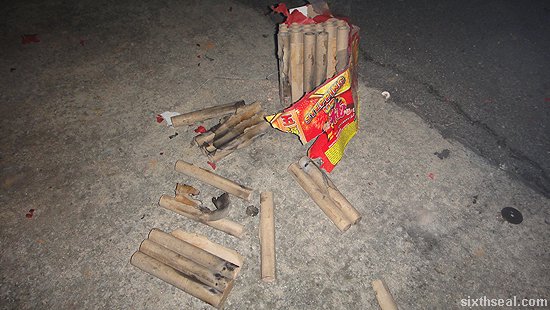 2. It can explode on the ground if poorly constructed

I actually wrote an article about it. One of my firework cakes exploded on me.

Despite those flaws (everything has a downside), firework cakes are probably the greatest invention since sliced bread in pyrotechnics. 😀 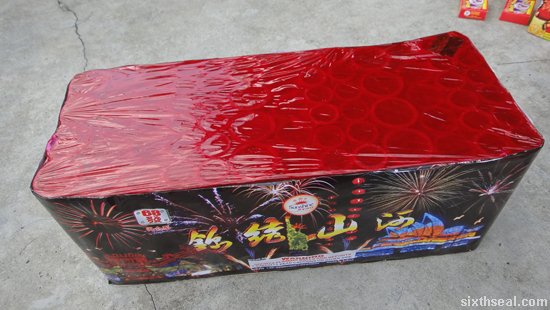 This 2 feet long, 68 shot beauty comprises of multiple artillery barrages that has mortar sizes ranging from 3” to 1”. It produces a rather nice finale and it’s this year’s crème de la crème of fireworks cakes in my stash – it even beats the more expensive ones above with the fanning effect (angled mortar tubes). 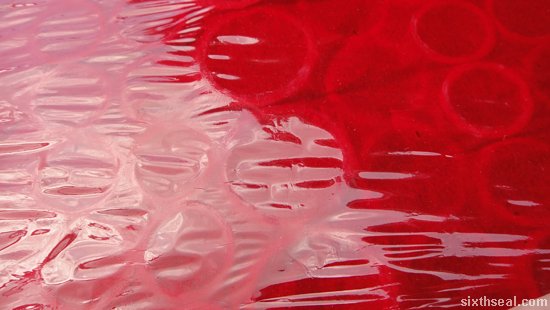 It was at the stroke of midnight that I let this one off so there is a lot of competition from other sources. However, you can see the effects of this aerial barrage quite well. 🙂

The finish was amazing, I love the “sparkling rain” kind of effects for an ending.

Well worth the RM 220 I spent though as you can see this class of fireworks barrages is not exactly meant for you to see (the optimal viewing angle is too high) so maybe if you live down the street, you’ll appreciate it more. 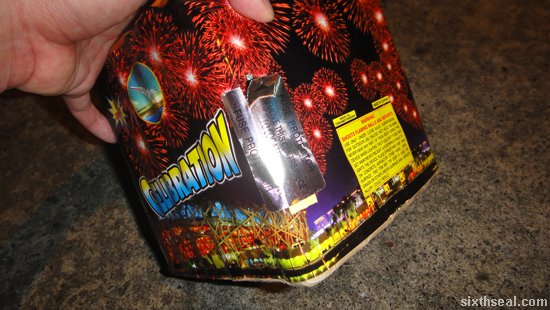 This is a fast 36 shot fireworks cake barrage. It’s simple, effective and quite awesome. It sends up to 6-7 aerial shots in a row up which explodes in a burst of color up in the air.

It’s over in a few seconds but classic. 🙂 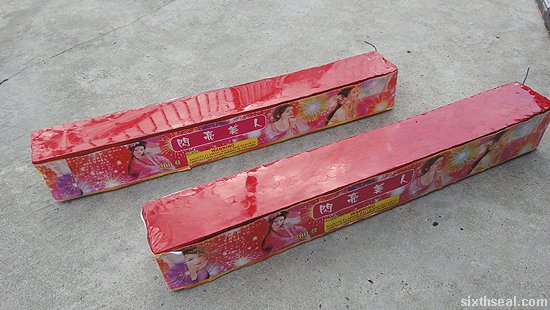 This 200 shot baby is quite impressive despite the small mortar tube size and height. It’s 1/9 the size of my largest fireworks cake and it’s easy to dismiss this wonderful piece of carefully arranged barrage. Fireworks cakes are like flower arrangements…the mediocre ones are blah but the good ones is a work of art. This is the latter. 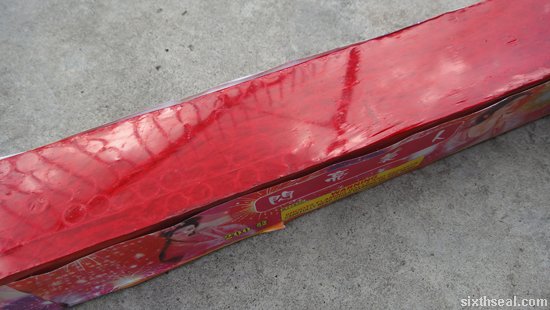 It doesn’t go very high but has a nice mixture of spinning whistlers, star bursts, and sparkling rain – it’s quite fantastic. I bought several of these and I’m glad I did.

It’s well worth the price, I’m grabbing more next year if I see it. Highly recommended!

This one is representative of the general small fireworks cakes. It would be nice if it didn’t blow up on the ground though.

Stepping Up was the multi-shot fireworks cake barrage that blew up on me. I had to pick up pieces from 25 meters away. 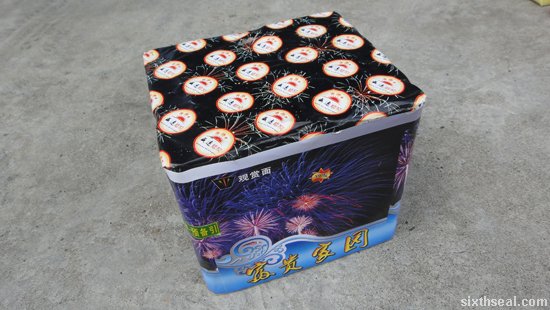 I don’t know the price to some coz it was a gift or a throw in after a large purchase. This is one of them. The retail price should be around RM 35-40. It has a variety of different effects and launches it quite high up – you can tell from the size of the fireworks cake and mortar tubes.

I like the part in the middle where it “fans” out the aerial shots and the ending. Nice.

…and yes, we let off the cakes in the middle of the road in Sibu, which is why you shouldn’t drive on CNY eve at midnight. All the locals know that but just in case you’re visiting, be home by 11 pm or wait till 2 am. 😀 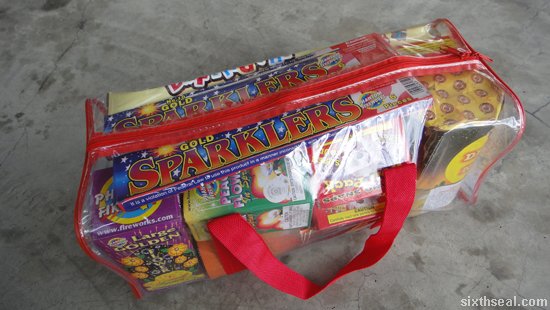 This is another unusual development this year. It’s priced at RM 85 and comes with a smorgasbord of fireworks – mostly directed towards children. 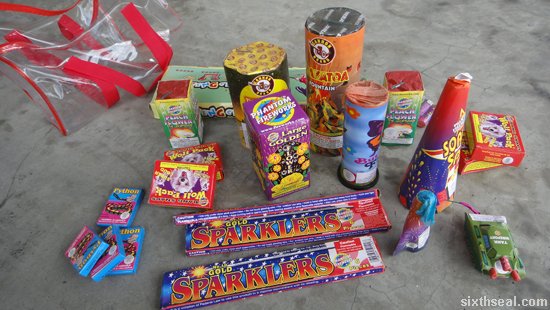 The total price of the items inside exceeds RM 85 commercially. It’s quite a good gift for kids, and it has a lot of nostalgic fireworks inside. I like the variety and there’s even one multi-shot cake/fountain inside. 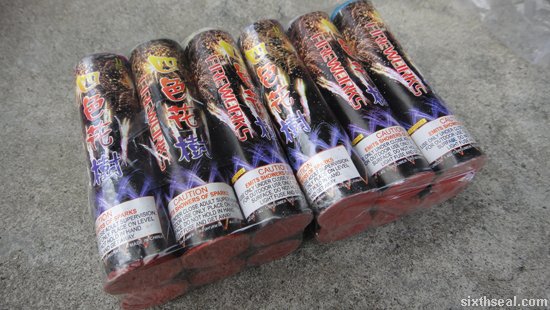 This is a typical example of a fountain. It’s a small tube about the size of a salute (e.g. Thunder King) that you set on the ground and light with various effects.

The color on top of the fuse shows what it’s going to look like. 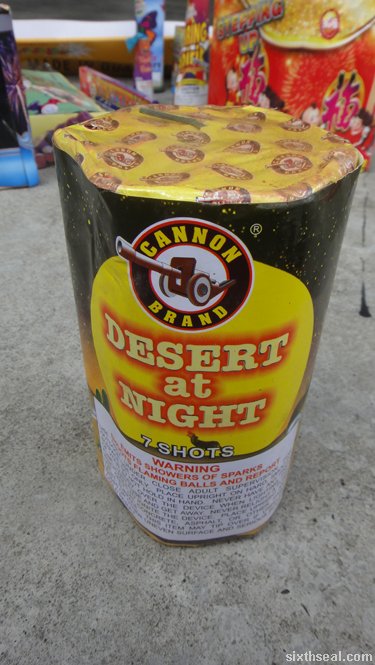 I don’t know which category to put this in as it is quite atypical. It’s a fountain with very nice effects and it has 7 aerial repeaters built in.

Thus, you get a combination fountain and aerial shot cake. 🙂 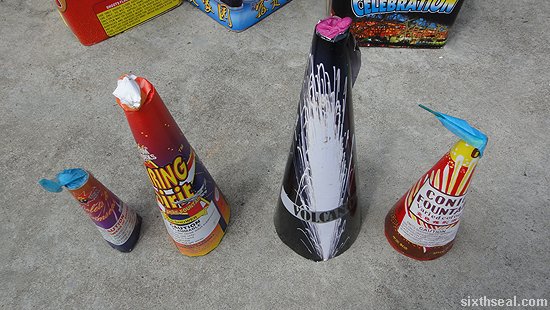 Pretty mediocre. This came out of the fireworks hamper and is the smallest of the fountains. It’s barely taller than my lighter. 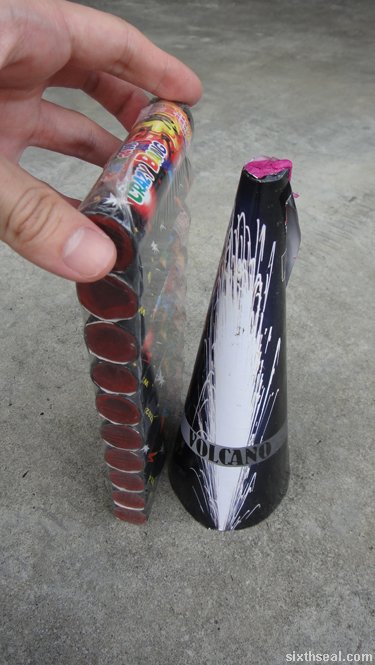 Very impressive. This retails for RM 20 for singles and it slowly shoots up to a very respectable 1 ½ storeys high.

It’s worth the display. 🙂

I wouldn’t buy it myself but it came in the gift hamper. Interesting display. 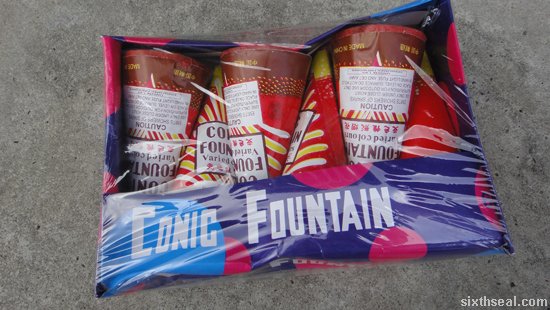 I bought a pack of this for RM 20 – it contains 5 fountains and it’s supposed to have a different effect for each.

I found out the hard way when I let one off which is a plain fountain and another when my two year old niece was watching where it had loud reports. There is no sign of what you’ll get – you have to light it to find out. 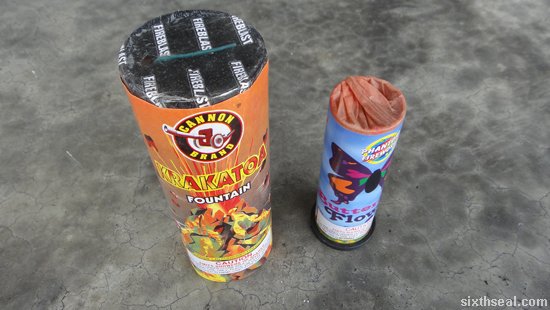 This cylindrical fireworks fountain has height going for it but ultimately only has one effect.

It’s quite typical of a fountain, nothing to write home. I couldn’t find the fuse at first and just lit the entire paper on top before floundering around with it. I also used the tube for something else. More on that later. 😀 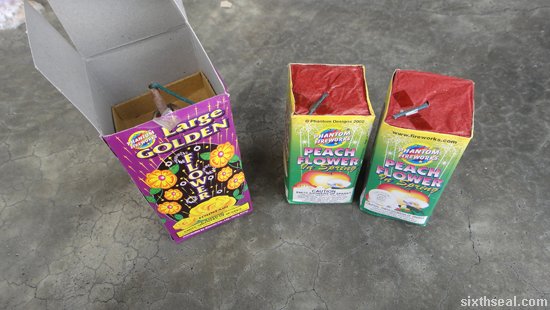 This is quite good actually! It starts with a screaming effect and just when you thought it was over, it keeps on going to another effect. I like. 🙂 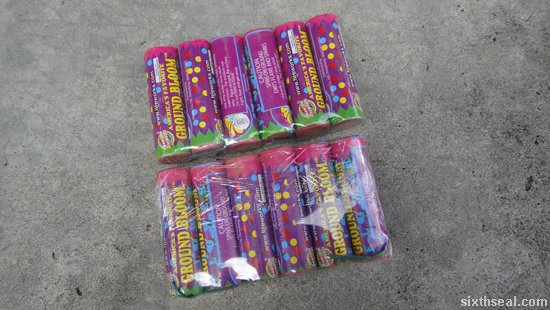 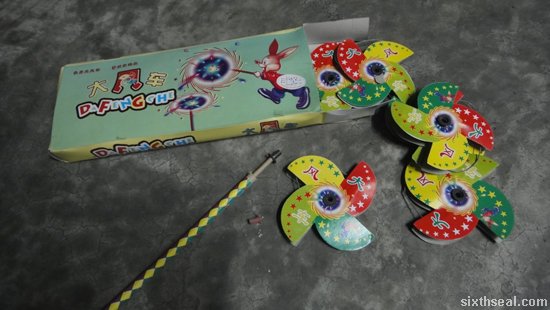 This is supposed to be attached to a stick but I broke the stick so I lit it on the ground. Haha! 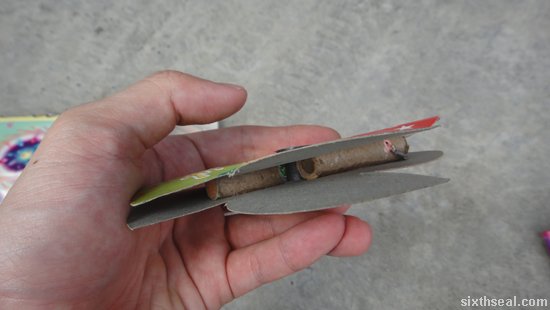 Honestly, I’m not sure it’s even safe to put on a stick coz I vaguely remember accidents from my childhood from the wheel actually spinning off the stick and flying off due to the rotational speed.

One of the fireworks I played with as a little kid. It has a dual (single?) fuse e.g. the fuse burns simultaneously into *TWO* tubes. That’s the interesting bit.

This US made spinner is a fast one with various effects and colors. It’s a typical example of a spinner. I liked it. 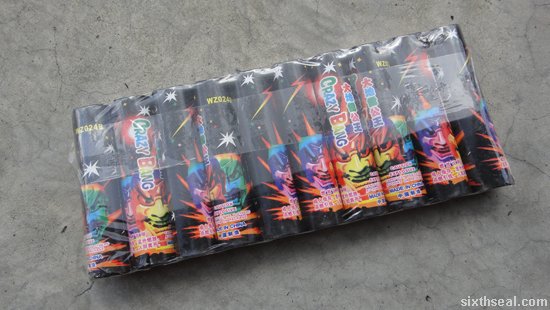 There’s a new batch of Thunder Kings this year which is quite a bit smaller than the original ones. I made a loudest firecracker comparison.

I wouldn’t call this a salute per se – it’s just one of the firecrackers that dropped off the roll. I’m just showing how large and loud it is compared to the typical Shun Lee Hung firecrackers. Old skool is gold skool. 🙂 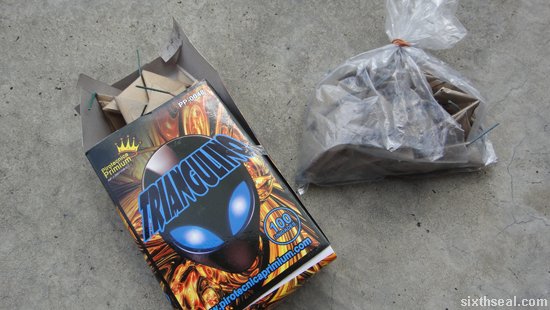 This is very, very old school. It’s a simple firecracker that contains flash powder wrapped into a triangle shape – the construction is easy and you can get bags containing 100s for little more than spare change. There are some strange imports this year though – Triangulinor which is definitely not from China.

It’s loud and effective. Fun to play. I had some fun playing fireworks with the neighborhood kids with this and one of the first videos I filmed back home was with my dad above. That’s what Chinese New Year is about. Family, friends and fireworks!

44 thoughts on “The 2012 Chinese New Year firecrackers and fireworks roundup!”