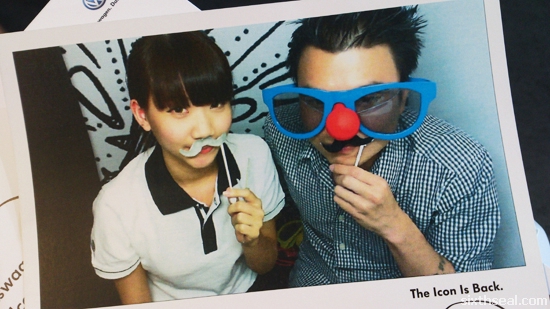 Greetings! How do you like my disguise? Heh. It’s a pair of oversized sunnies, a huge bright red bulb of a nose and a fake mustache. 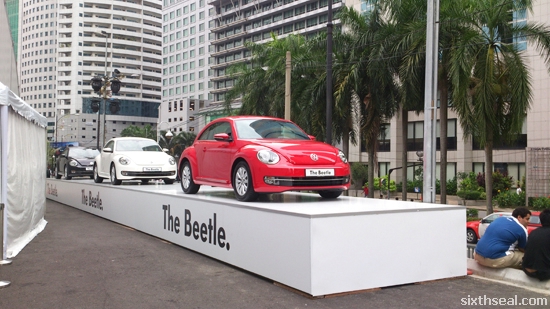 I was at the Volkswagen Das Auto Show 2012 during the weekend – it’s a two day free event that’s open to the public and all the slots were snapped up really quickly. The Icon Is Back is the theme of this year’s show and it features the new Beetle prominently. 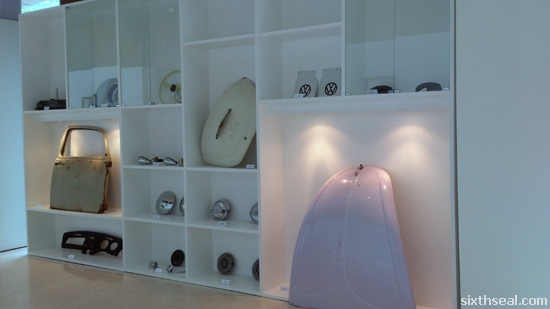 There’s even a fully disassembled classic Beetle in the foyer! 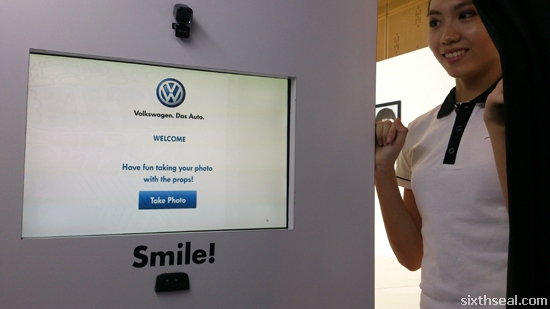 I was at the Volkswagen Das Auto Show 2011 and I have to say, this year’s show surpasses the previous one by leaps and bounds. There are a lot of interactive displays and fun stuff to do that I spent nearly 4 hours there to play around and experience everything. 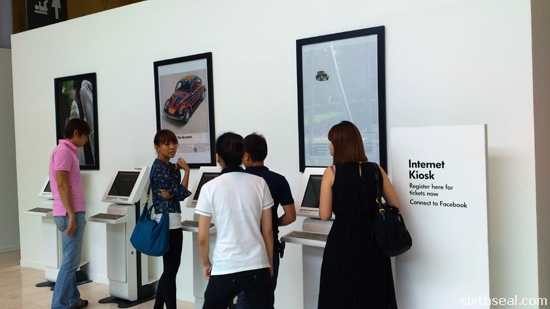 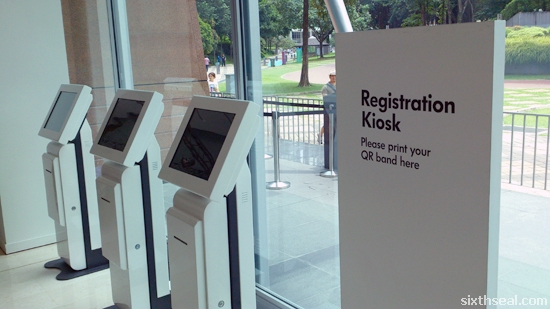 …and you get issued a QR code wristband when you register. 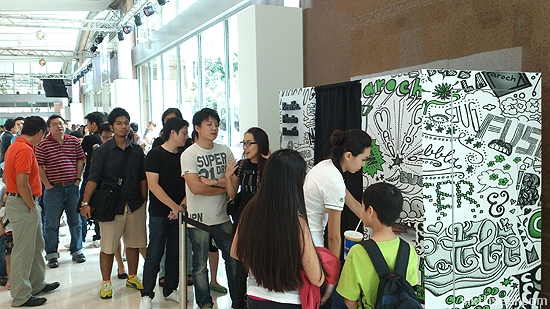 I was there early and went for the strategically placed photo booth outside to snap a photo. 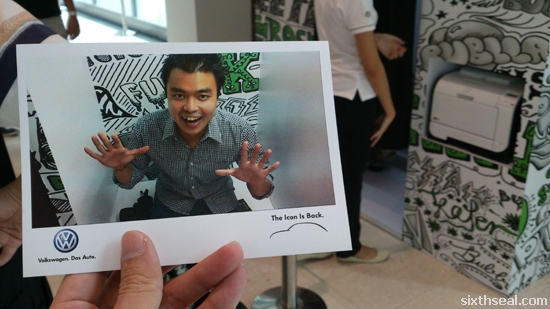 There are no lack of things to do while waiting for the show to start.

The Icon Is Back kicked off with a cinematic experience that is simply mind blowing. There was a countdown and the huge darkened hall exploded with a symphony of images and sound. 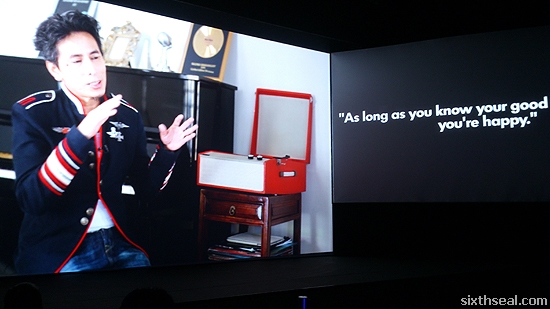 …and has personalities like Patrick Teoh, Melinda Ooi, JJ (from Hitz FM) and others reminiscing about owning and driving the original Beetle.

The screen is over 180 degrees and you have to crane your neck to see everything that’s going on. I really liked that – it provides a good kind of sensory overload. 🙂 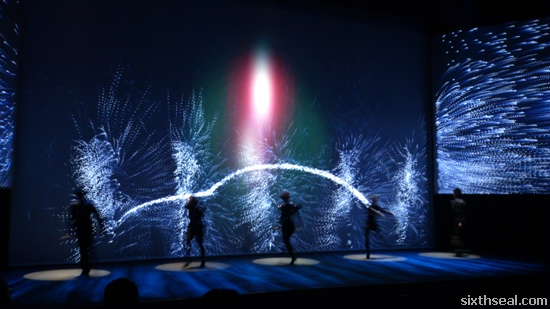 The show continued on with a launch gimmick that has choreographed dancers with light and shadows before The Beetle was driven on stage.

It’s one of the hallmarks of Volkswagen events – everything is a wonder to behold and just when you thought that it was over, another feature starts that tops the previous one.

The auditorium was packed with people and the first area where The Icon Is Back cinematic experience is held was the best part for me. It was just amazing, the way they pulled off the entire thing. 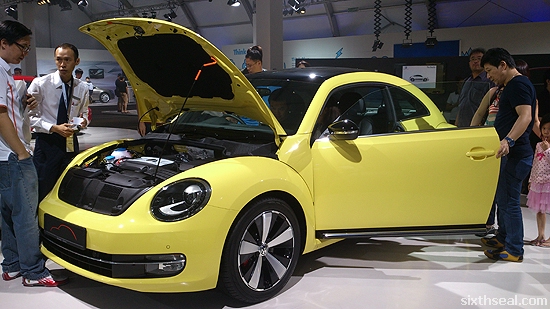 Next up is the area where you can see all the Volkswagen cars in addition to the much anticipated new Beetle. Now, this isn’t a standard static display but a highly interactive one. 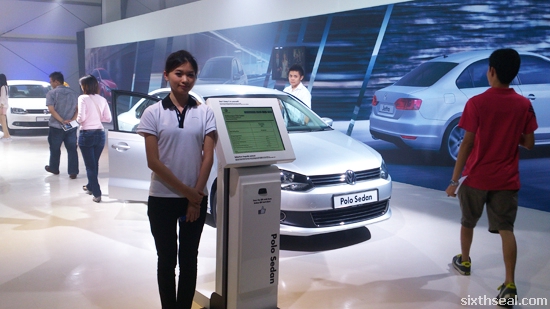 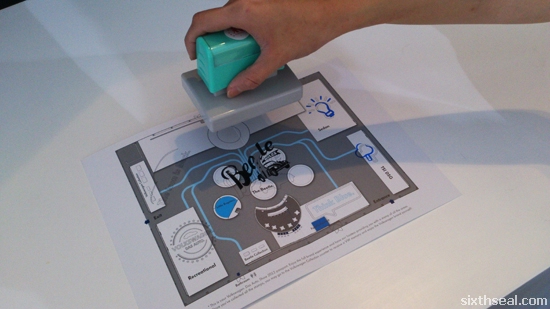 There’s a passport that’s handed to you when you enter – it’s a map of the entire showroom and not only does it provide you with clear signs on where is where, the “passport” also has places for stamps which you can only get once you’ve visited the area!

I think that is a brilliant idea! You get a gift if you get all the stamps from the hostess, I spent a lot of time inside until the batch I was with was nearly gone and the showroom empty. Heh. 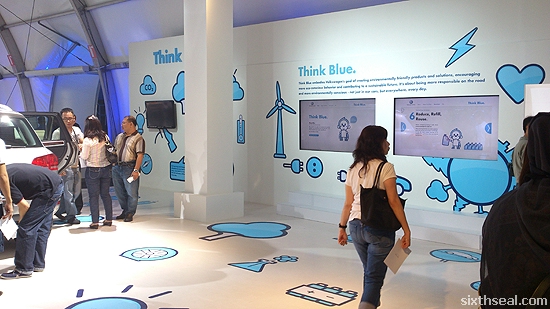 The Think Blue initiative area is one of the highlights with interactive displays which shows how we can reduce our carbon footprint. 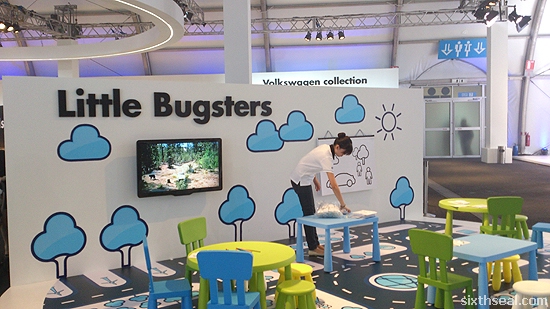 There’s also a place for kids to play with… 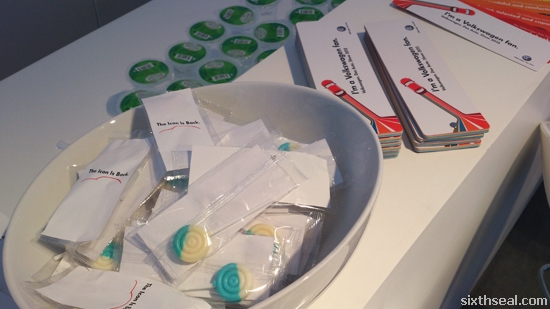 …and a cafe of sorts where you can have a drink of water and some candy after walking around – all complimentary, of course. 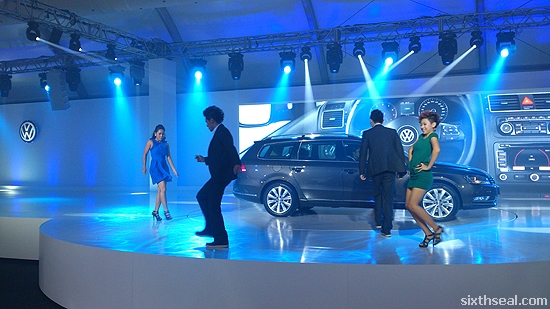 The stage has constant shows merging people and cars in a unique performance. 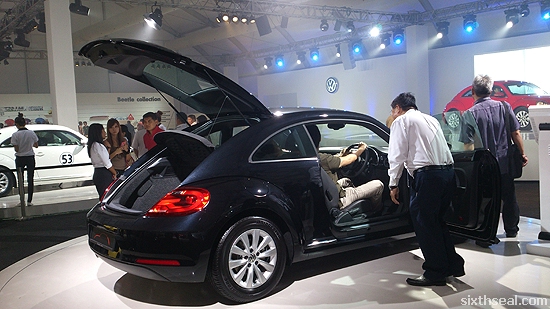 It’s the centerpiece of the show and everyone flocked to check out the interior and features. The 1.2L Beetle features a 105PS turbocharged 4-cylinder engine while the 2.0L version has a power output almost twice that, topping out at 200PS with a 7-speed direct shift gearbox (DSG) while the former is equipped with a 6-speed DSG. 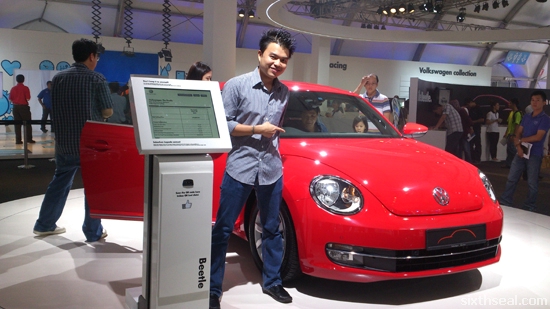 There are a lot of different colors too, I suspect the Tornado Red and Saturn Yellow would be popular but I personally like the Deep Black with Pearl Effect. There’s also a Pearl White version if you like that color. 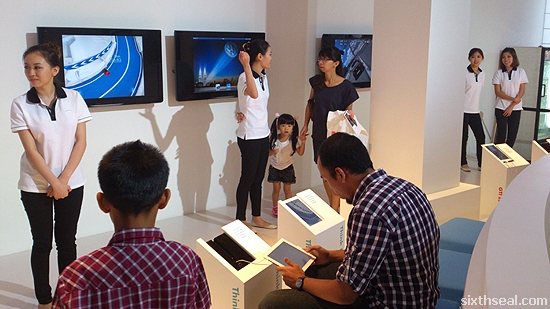 I would allocate a lot of time to this place – there are a lot of fun things to do, like the various iPad games which you can play. Note that it’s connected to the screen and what you do is reflected so even while you wait your turn, you’ll be entertained with people playing badly. Heh.

There are photo booths scattered throughout the space, the Beetle Photo Booth being the most popular one. I met Tung Ai while queuing up, he introduced himself as a reader of my blog and we chatted for a bit. 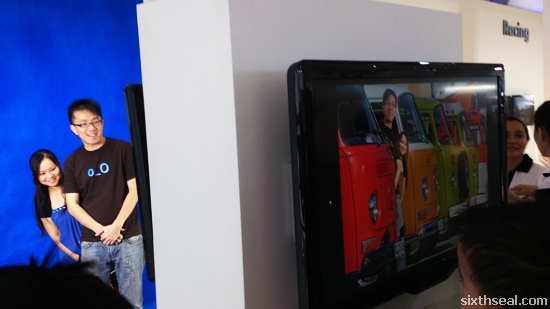 This is the photo we were queuing up for – look at how interactive the screen was, that’s the two of them posing behind the screen. Thanks for saying hello! 🙂 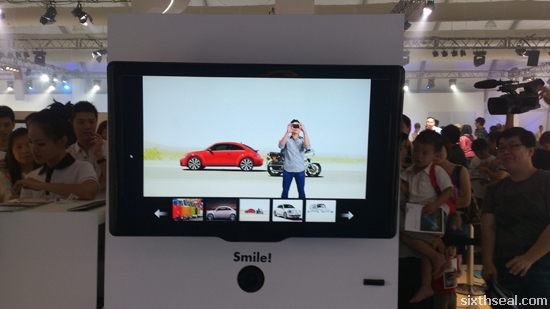 This is what the photo looks like from POV – you can see where you are in relation to the background that you choose so I saw a lot of creative poses. 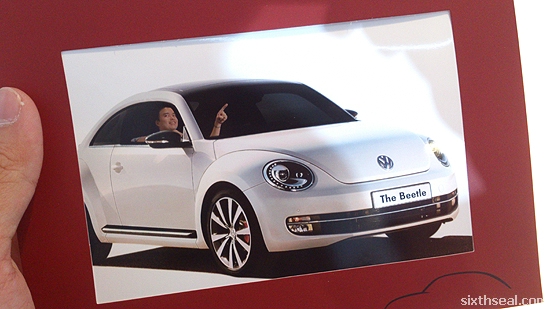 This is mine. Heh. I wanted to wave out but settled on putting my arm on the window and pointing ahead instead. 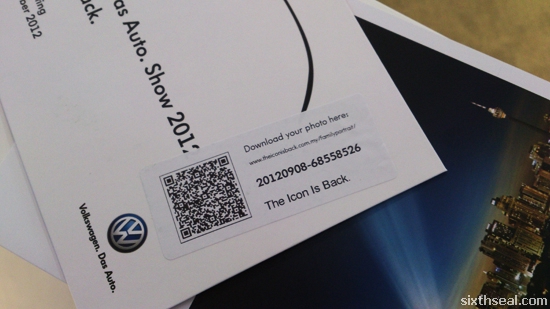 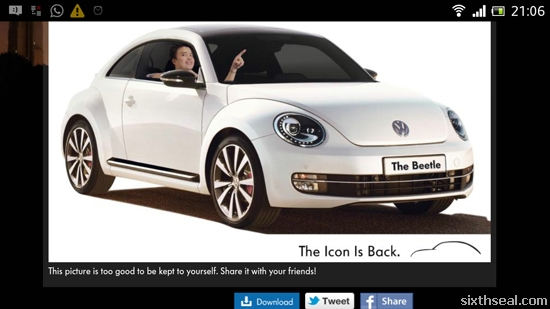 I managed to get all the stamps for my passport and got free gifts at the end, and also a tattoo. Temporary of course. 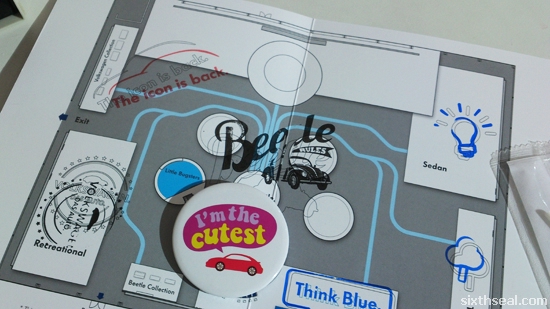 Here’s one of us posing with it, hello Penny! 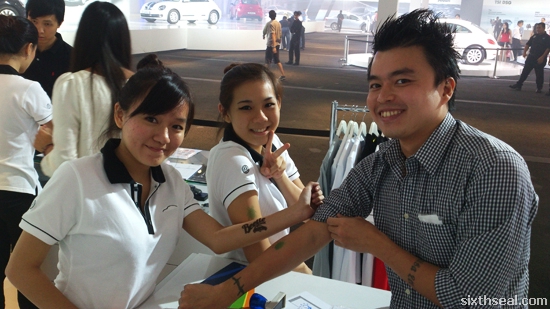 It was a lot of fun, I didn’t realize how much time I spent inside until I realized that people were slowly filtering out. I can’t wait for the next Volkswagen Das Auto Show! I really

the social media interactive integration of the show this year. By the way things are going, it looks like it’s only going to get better! 🙂