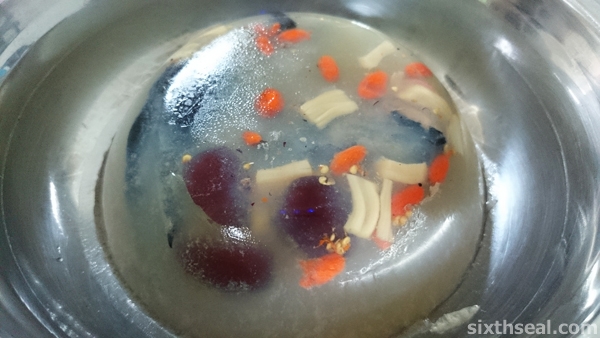 Black chicken soup gellification. Yeah, this is a solid jelly black chicken “soup” I made for my dear! There’s nothing that sounds more appealing than suspending the beautiful black meat of the Silkie chicken in a jelly with wolfberries, dried scallops and other ingredients usually used in cooking this Chinese soup. 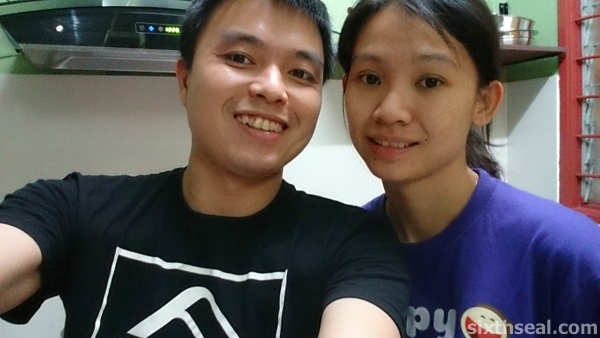 I came across this idea when my better half had a sore throat and didn’t want to eat any solid food. It’s known as a curative food in traditional Chinese medicine. 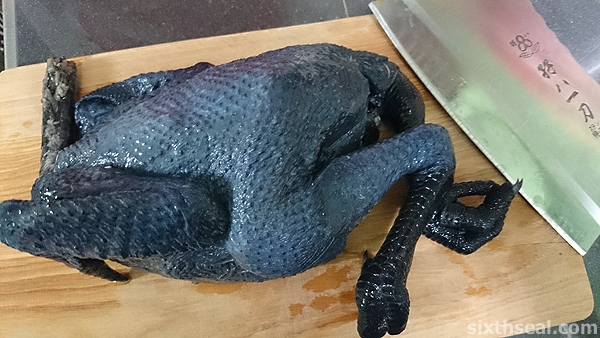 I’ll make her Silkie black chicken soup, with a twist! It’ll be *entirely suspended in clear agar* so you can see the distinctive black meat and black bones of the Silkie chicken! 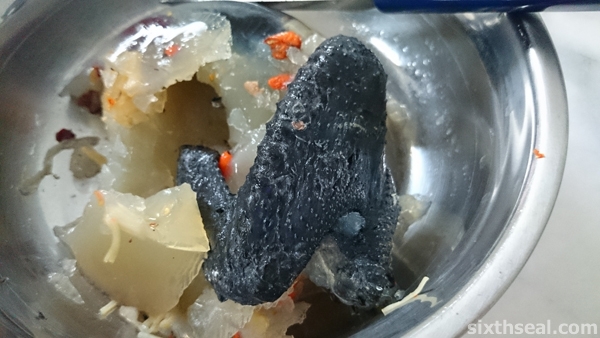 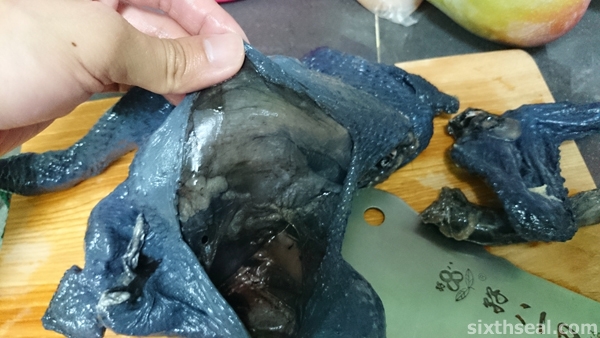 I bought one of the small Silkie chickens you can find in wet markets here. This is the famous black chicken (which is entirely black – bones, flesh, organs) that’s commonly sold here for soup although it can be cooked like a regular chicken. I know of other black chicken breeds out there – a USD 2,500 per chicken Ayam Cemani made the headlines last year, but the ones we get are Silkies (which has contrasting white feathers when alive). 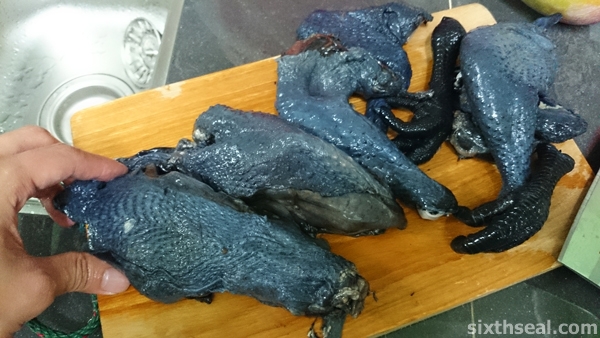 You need to portion the chicken by cutting it up as you normally would – there’s eight edible portions (2 x drums, thighs, wings, breasts) plus the carcass. I wrote a guide on how to French cut a chicken last time for a poached chicken with beetroot and nectarine dish I made but you can cut this anyway you want since it’s going into a soup. 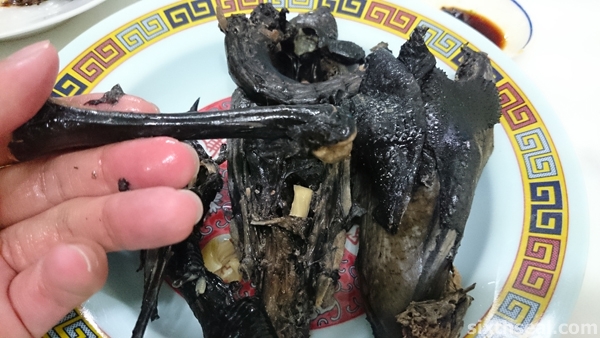 Do make a nice cut for the parts you want visible in the jelly though – I used a drum in one and a wing (minus drumette) with a chicken leg in another. 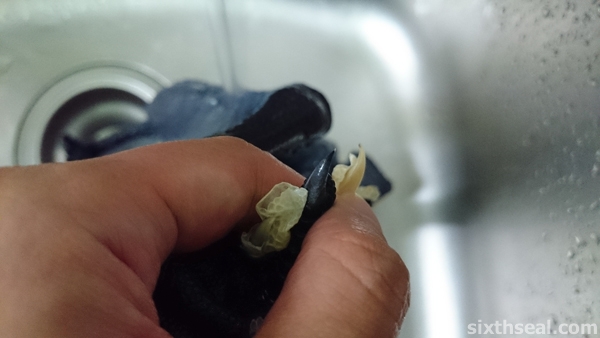 Silkie black chickens are always sold whole here, and undressed, so remember to take the pieces of cartilage (?) off the feet. I don’t know what they are called, so I call them chicken toenails. 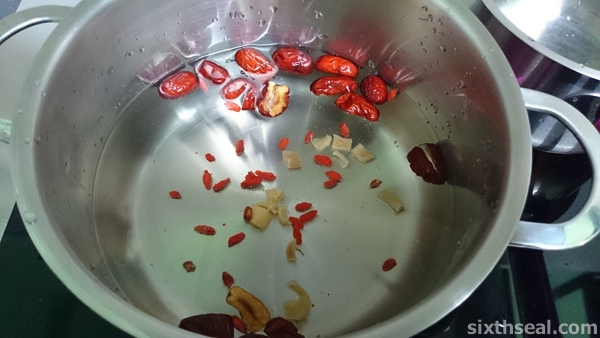 I put a 1 litre pot of water to the boil and added in all the goji berries, Chinese dates, dried scallops etc. You can also add ginger if you like. 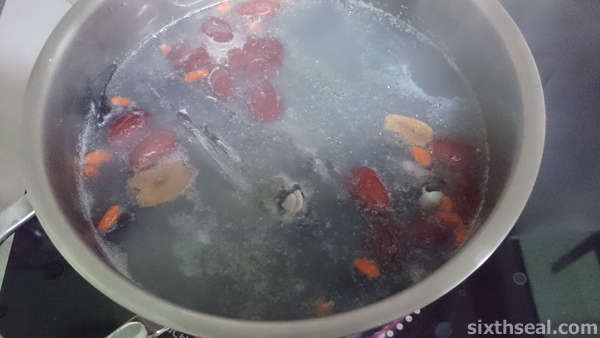 Once the water is boiling, I added in the pieces of chicken and set the timer for 30 minutes. That’s all you need for the black chicken soup – it’s ready to drink (and I did take some out so she can have the soup first). 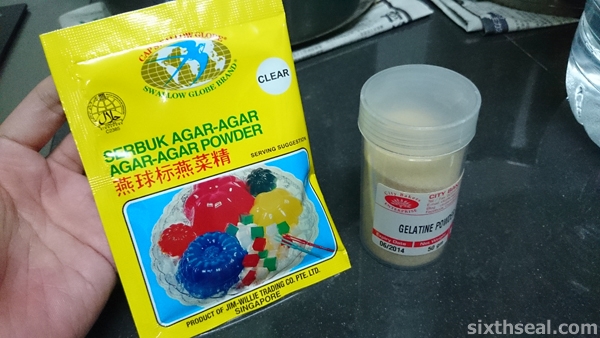 Next up, comes the fun modernist cooking bit – gellification! I used agar instead of gelatin since I wanted it to set only when it has totally cooled. I used clear agar but you can try out other colors like blue or green to play tricks with your mind while eating – it’s flavorless anyway, but I reckon clear would showcase the beautiful black chicken and bright red goji berries well. 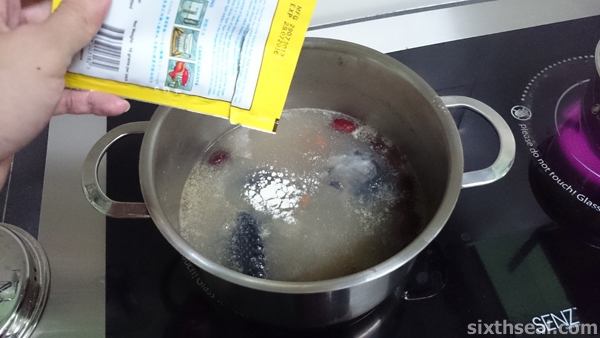 I poured the agar into the black chicken soup and carefully stirred it before portioning it out. It’s important to remember that the dates, scallops, and goji berries will set so you can actually move it around since the viscosity of the liquid has changed slightly. 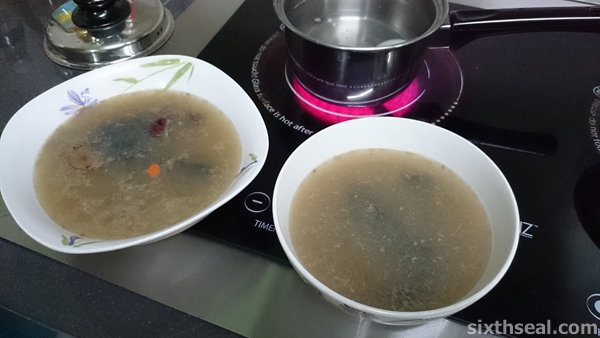 I arranged it so that it’ll come out in one square and one round mould. 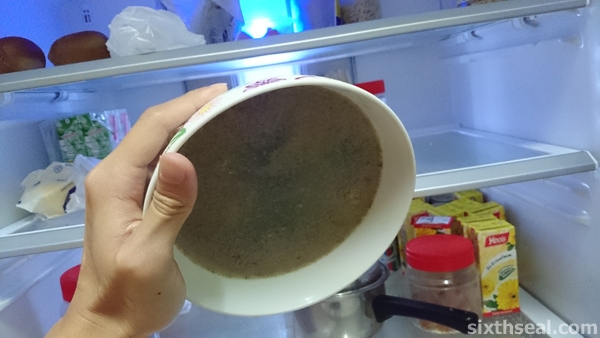 …and my dear accidentally drank one of the agar-infused bowls while it was cooling coz I asked her to finish the soup. Haha! Oops! 😉 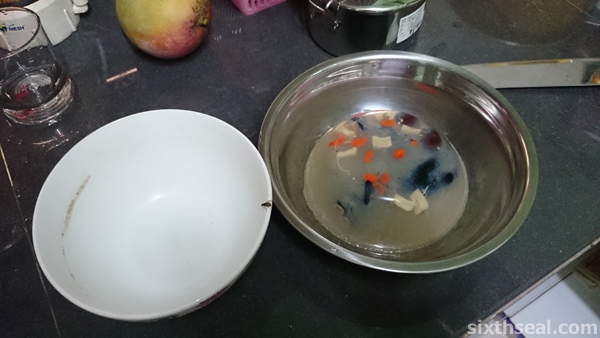 No worries, I still had one and here’s how it turned out after putting it in the fridge for 2 hours to set the agar. It can be helpful if you have sore throat since a cold jelly is probably easier to eat than anything else. 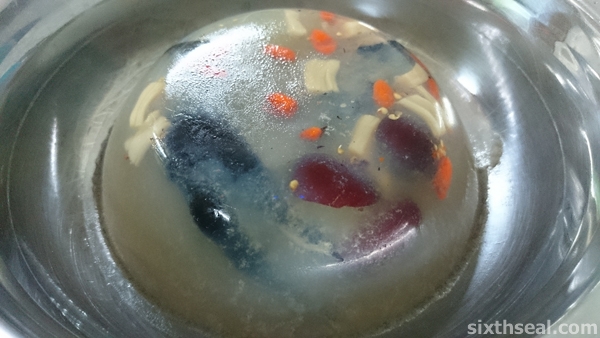 I thought it was nice but I could have improved on the dish since my dear had cooked porridge so ideally my next version would look like this: 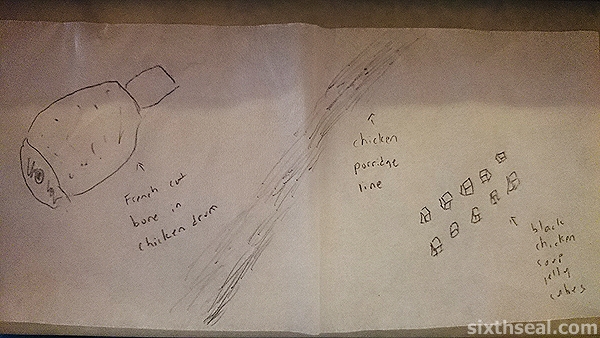 Yes, I drew it on a napkin. 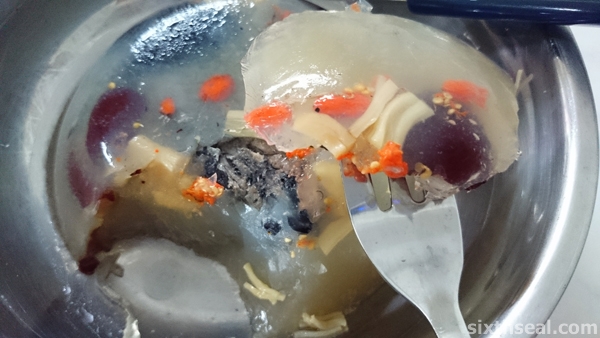 It’s fun to incorporate easy molecular gastronomy and modernist cooking ideas to even the most traditional dishes to spice it up! 😀