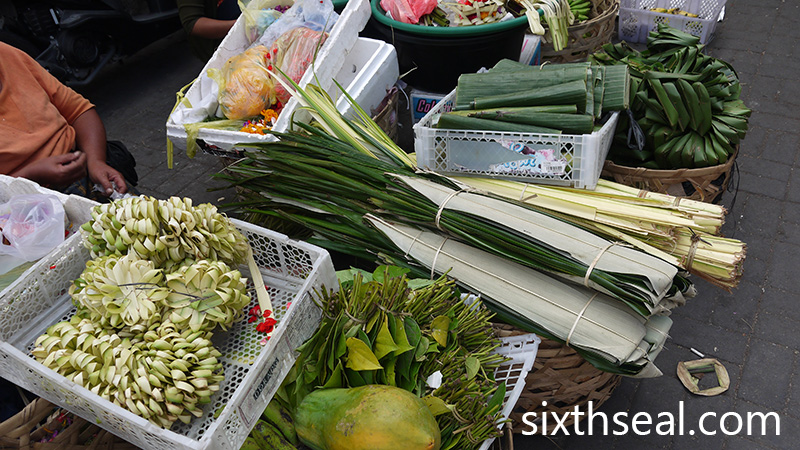 We went to Ubud Morning Market as part of our cooking class. There are actually two markets in Ubud, both interconnected. The Ubud Morning Market is where the locals go while the Ubud Traditional Art Market is a more tourist oriented market. The latter was featured in Eat Pray Love and is known locally as Pasar Seni Ubud. 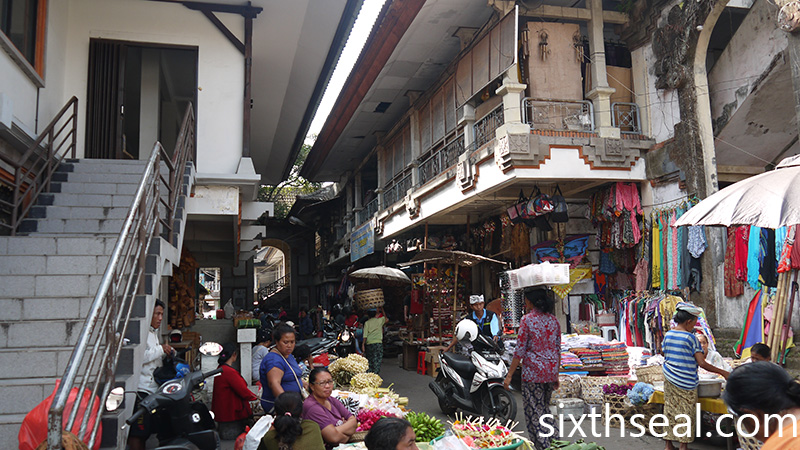 I thought that going for a Balinese cooking lesson was a cool thing to do while on vacation, although I can’t claim credit for it. My better half was the one who thought of it and booked us the classes. The van picked us up in the morning and we went to the Ubud Morning Market for a tour of the place and to sample some local produce as well. 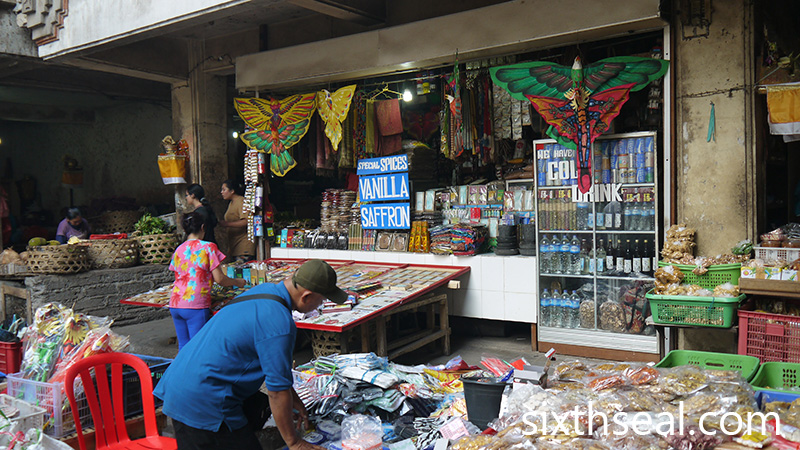 Our guide took us through the sight, sounds and smells of the Ubud Morning Market… 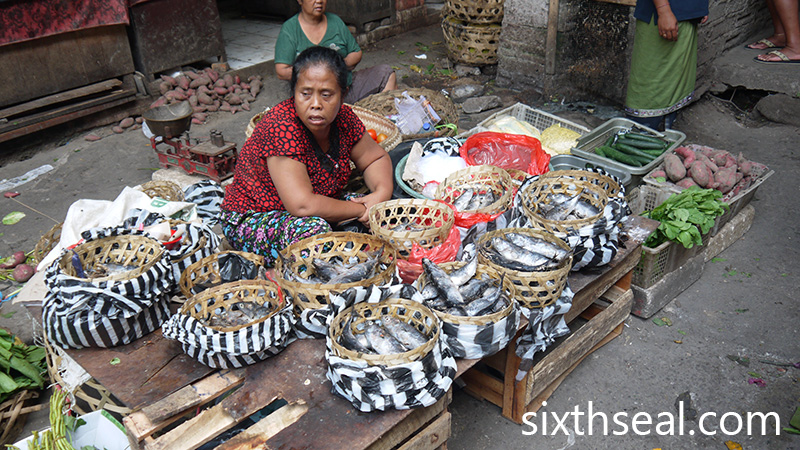 …and I thought it was very refreshing that there was no attempt to sell us on anything (probably coz these are mostly produce). 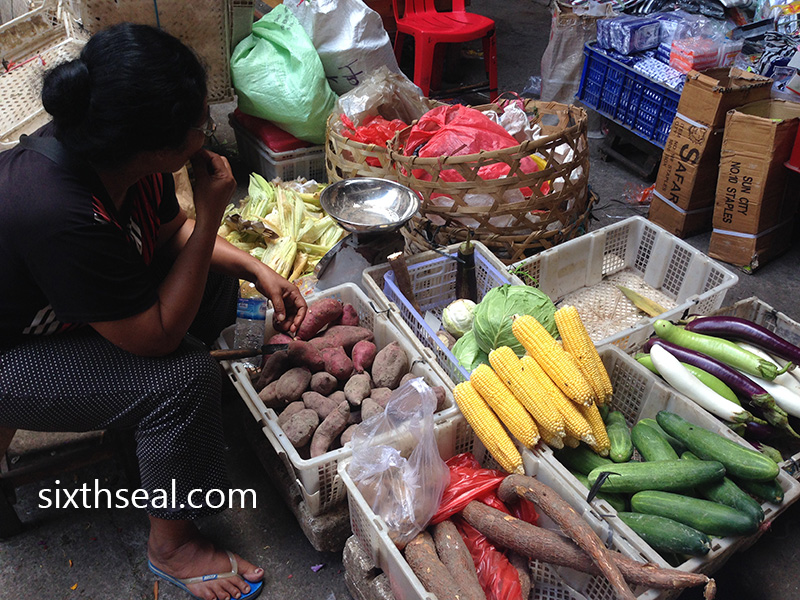 The fruits, vegetables and meat are mostly familiar except for this unusual specimen: 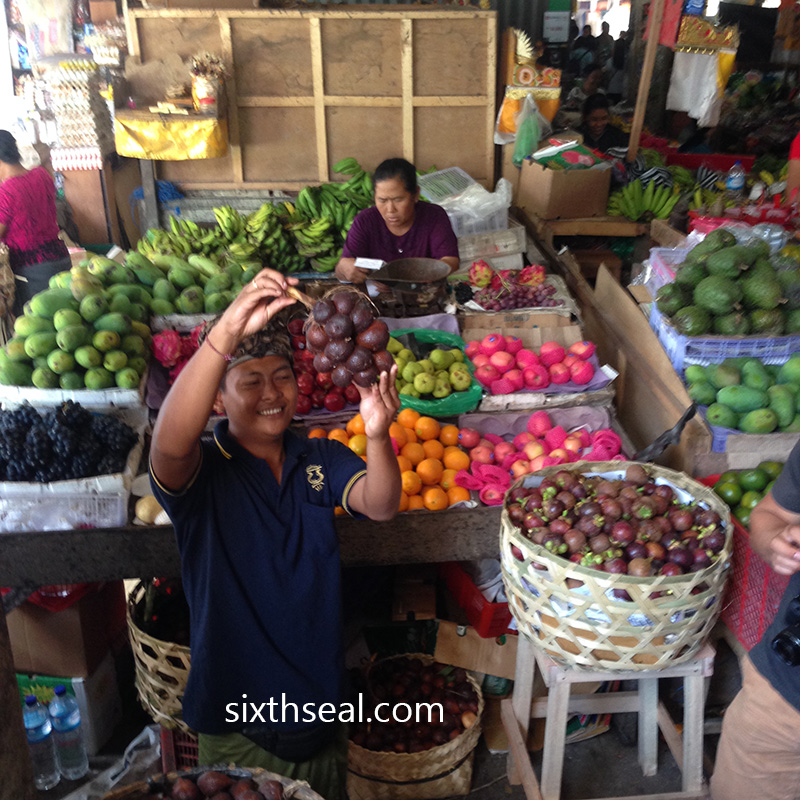 This was described as a “sweet passionfruit” to us and we all got a taste of it. I thought it was a buah salak at first. It’s not passionfruit as we know it, this is a South American breed called granadilla. Unlike our purple passionfruit, this is orange and features a seed matrix that looks like kiwano (horned melon). 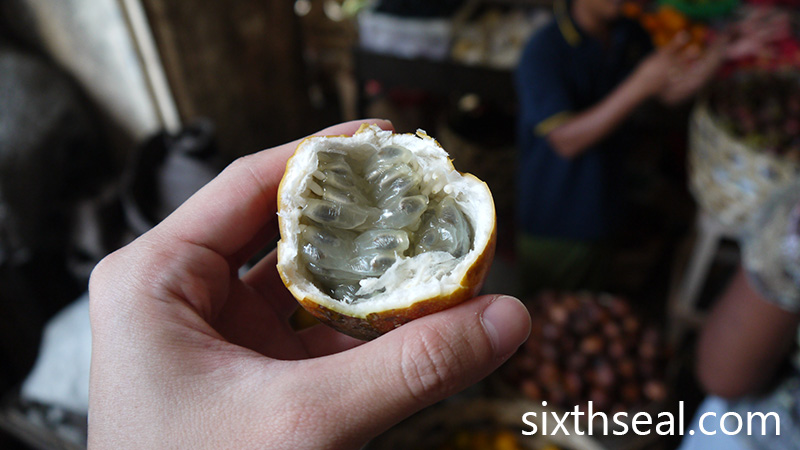 It’s very sweet with no sour notes and nice to eat by itself. The pulp is very tasty. 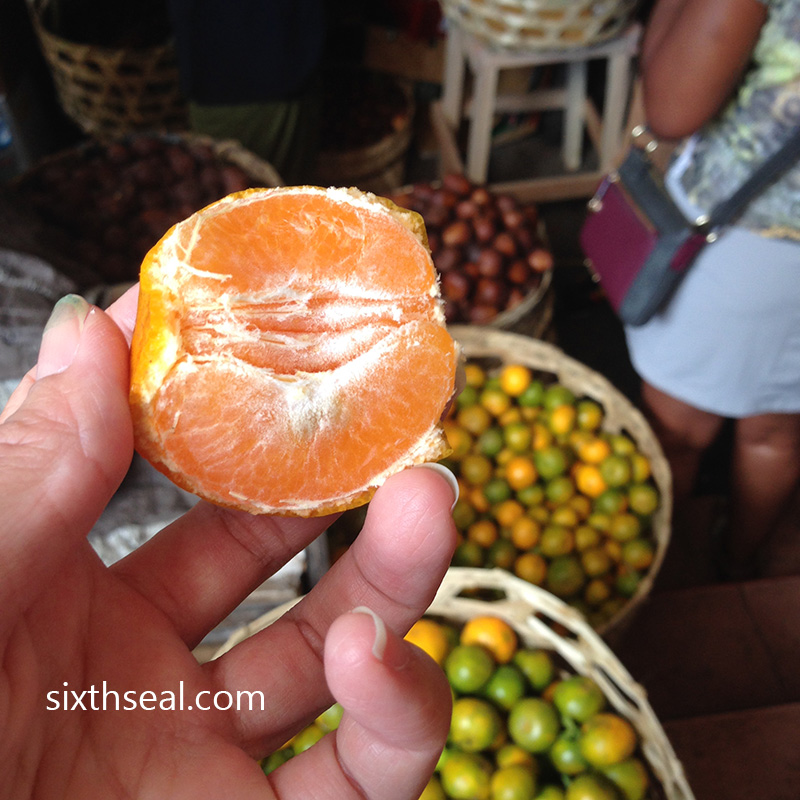 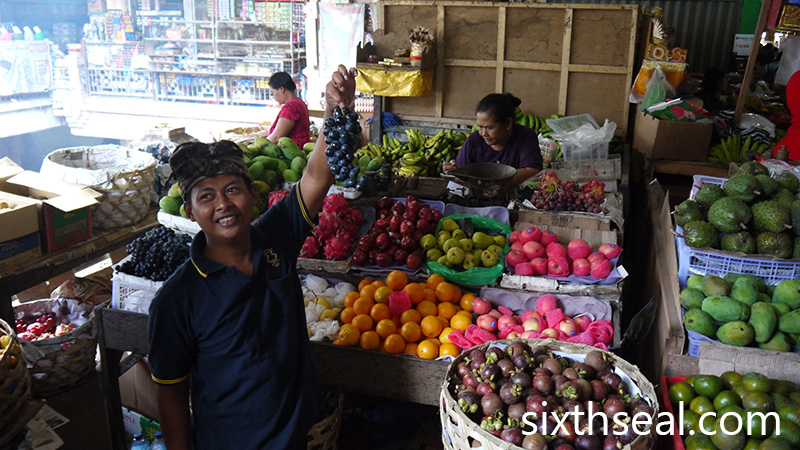 Bali is also able to grow their own grapes now. I tried one of the first batches of Balinese wine made from Balinese grapes in Club Med Bali in 2013 and it was decent, if rather immature. 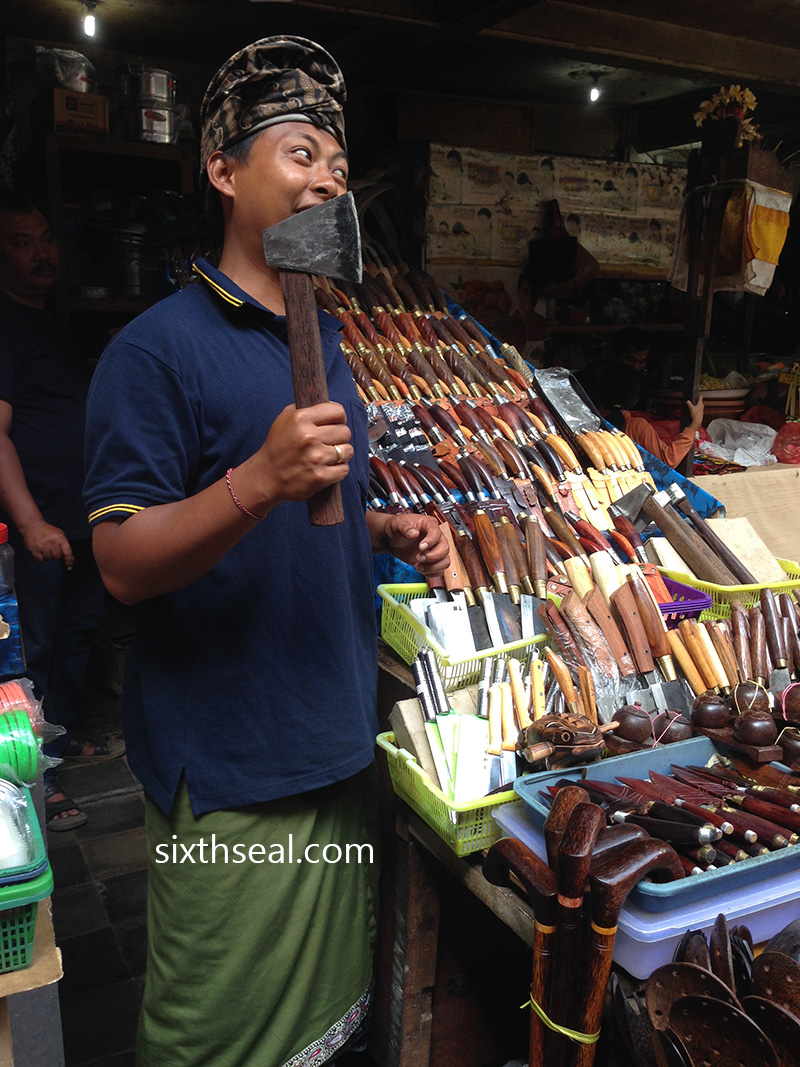 There are also knives and other local goods on display at the Bali Morning Market. 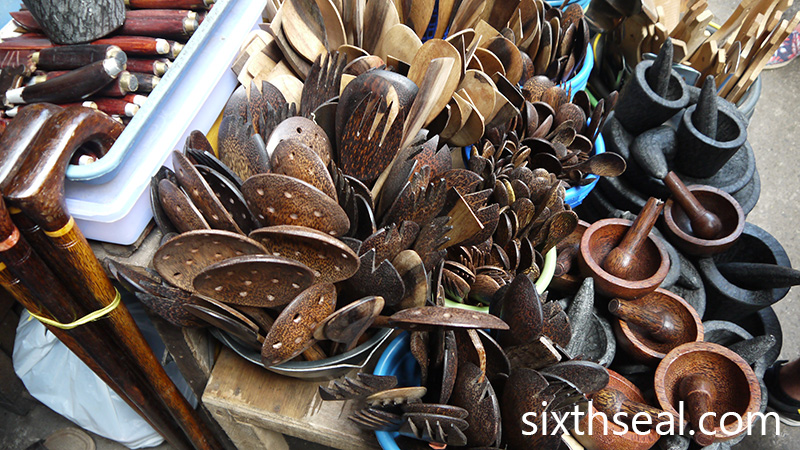 My dear spotted a mortar that she really liked – it’s made out of volcanic rock from Bali! I paid IDR 60,000 (about RM 20) which is quite a good deal. 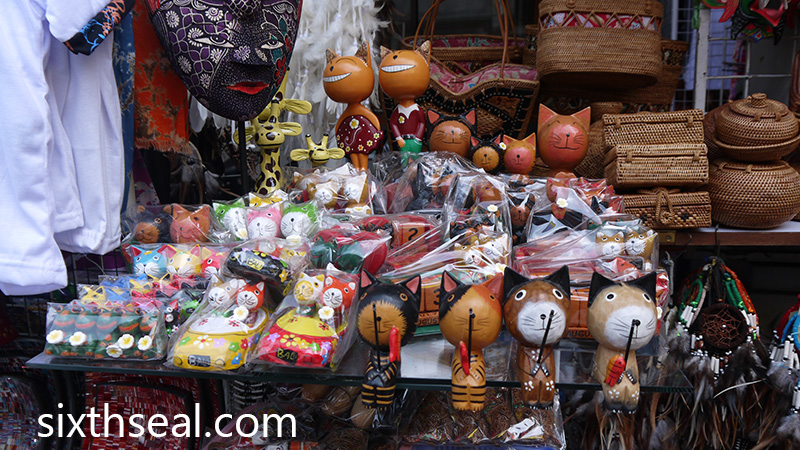 We also walked around the touristy Ubud Traditional Art Market after we finished our cooking lesson. It’s worth a stroll even though you’ll find most of the things here are mass produced souvenir kitsch. My better half also had a theory that if we were carrying a certain color of plastic bag, it means that we were willing to spend more, or rather am susceptible to be conned more easily. Haha! 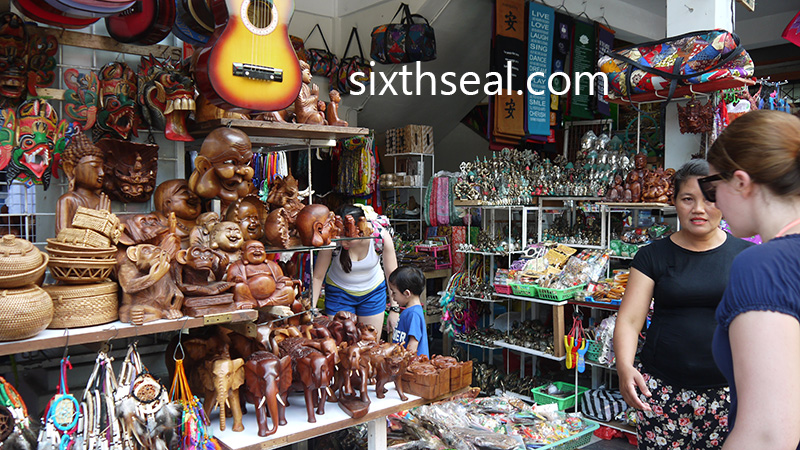 I don’t know how true that is, but I had limited headway while bargaining for a set of three kittens that my dear liked. I think we ended up paying RM 80 for it. I don’t think there’s a plastic bag conspiracy though, it seems quite unlikely in the free market everyone-for-themselves nature of the tourist trade, but you never know.