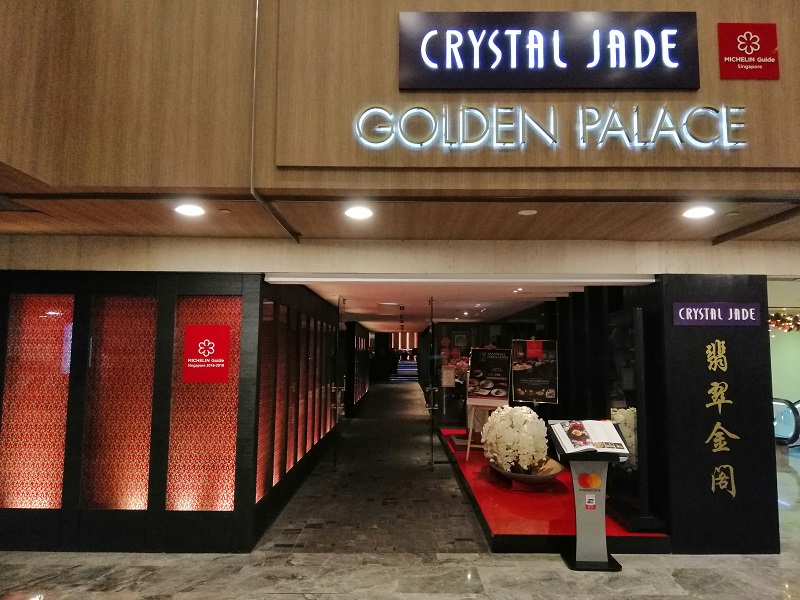 I’ll like to tell you a tale of extreme disappointment. Let me preface this blog post by saying Crystal Jade Golden Palace was the worst Michelin star restaurant I’ve been to in Singapore. The food was very mediocre, and the prices were incommensurate to the ingredients and experience. I wanted my itinerary to include one homegrown local chain, so I came here despite warnings and objections from other people. My dad has been to this exact outlet and said it was disappointing. He never says things like that. 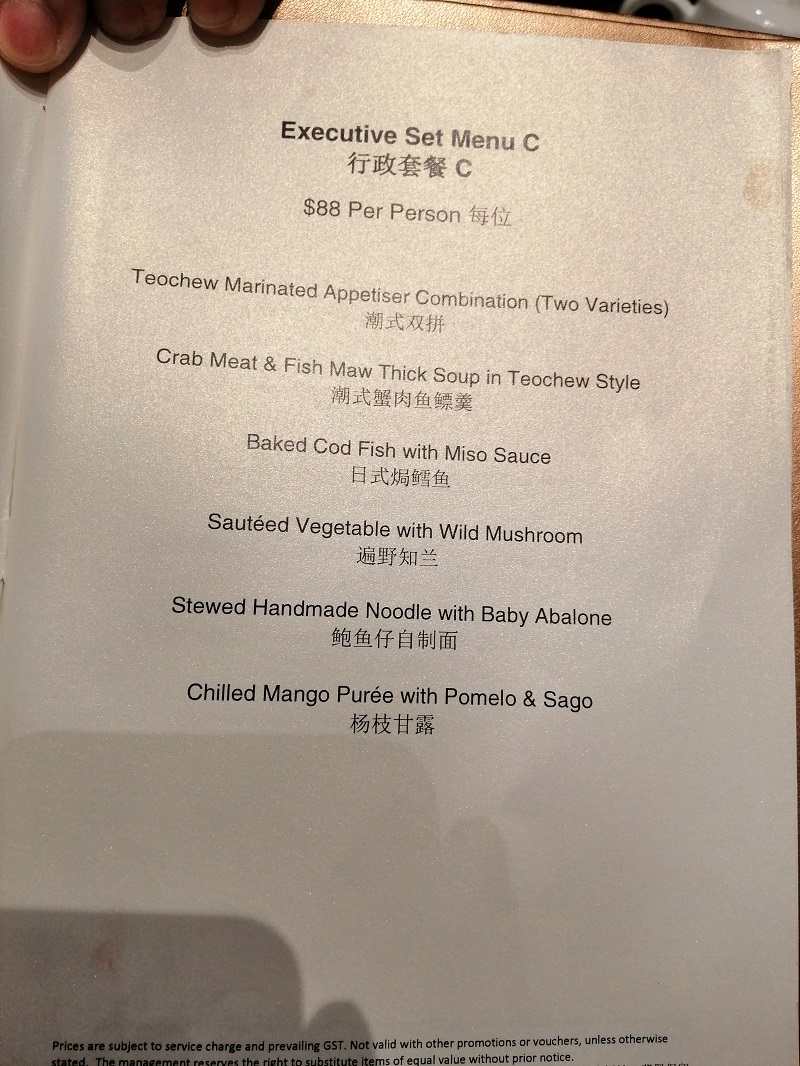 I was seated just inches from the waitress station so there was constantly movement and noise around me – shouted orders, staff getting chopsticks, water refills. Crystal Jade Golden Palace tries to squeeze so much revenue out of the outlet that there are chairs and tables where there should be none. I came here to try their SGD 48 set meal but was told that it’s only available for lunch. This wasn’t stated at all on their website or menu. The dinner menu starts at SGD 78 and it doesn’t look as appealing. 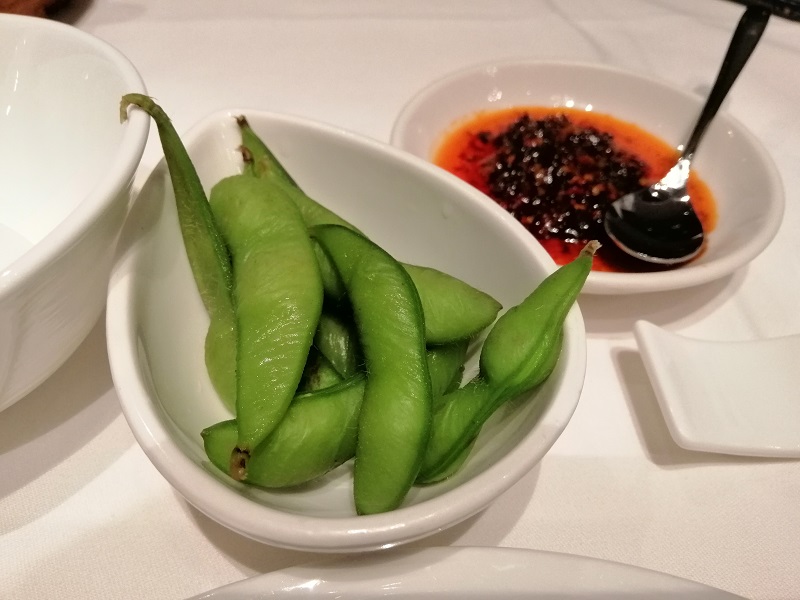 I went for Executive Set Menu C at SGD 88 instead. It took me ages to decide coz nothing in the menu items sounded appealing to me. I didn’t think there was anything special about the dishes but I silenced the inner voice telling me to run and picked one almost at random. I was offered edamame beans, which was charged at SGD 2. Even my tap water incurred a SGD 1 cost! 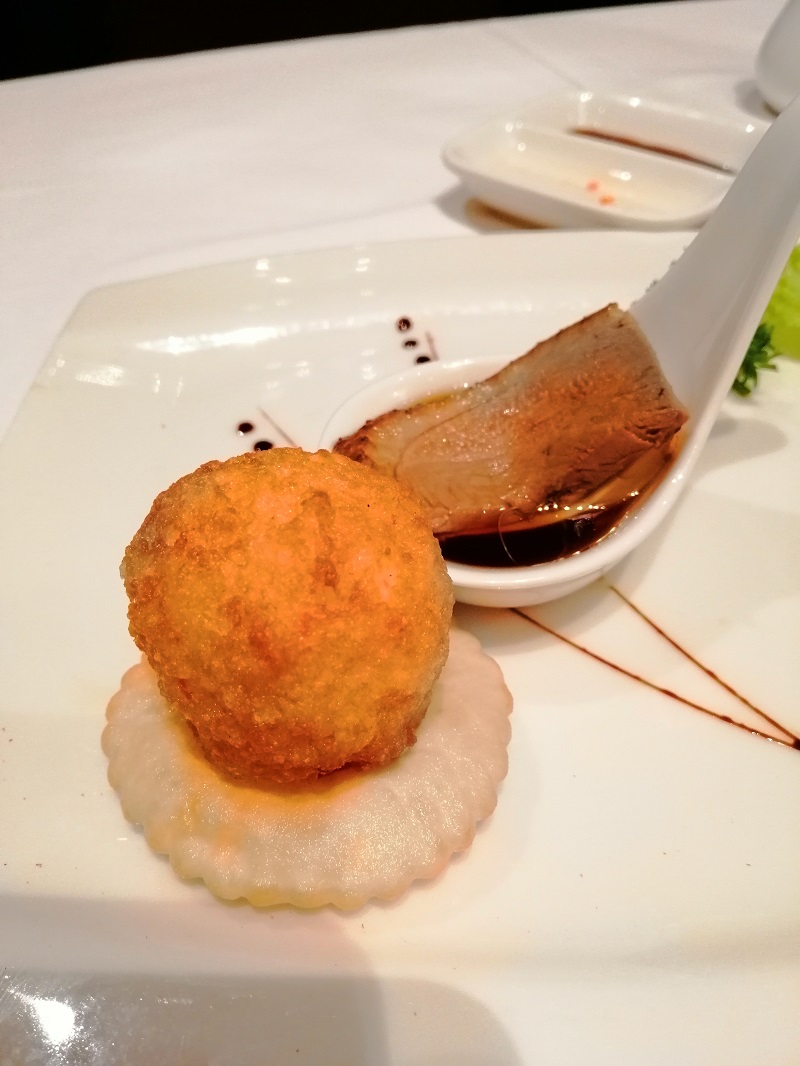 Teochew Marinated Appetizer Combination (Two Varieties). The deep-fried ball thing was very ordinary. It made no impression whatsoever. I don’t even know why there’s a rice cracker beneath it as it adds nothing to the dish. The slice of duck with vinegar was likewise forgettable. It’s just a plain, below average piece of meat doused with vinegar. If I didn’t like the kind, grandmotherly waitress serving me, I might have been tempted to cut my losses and leave right now. 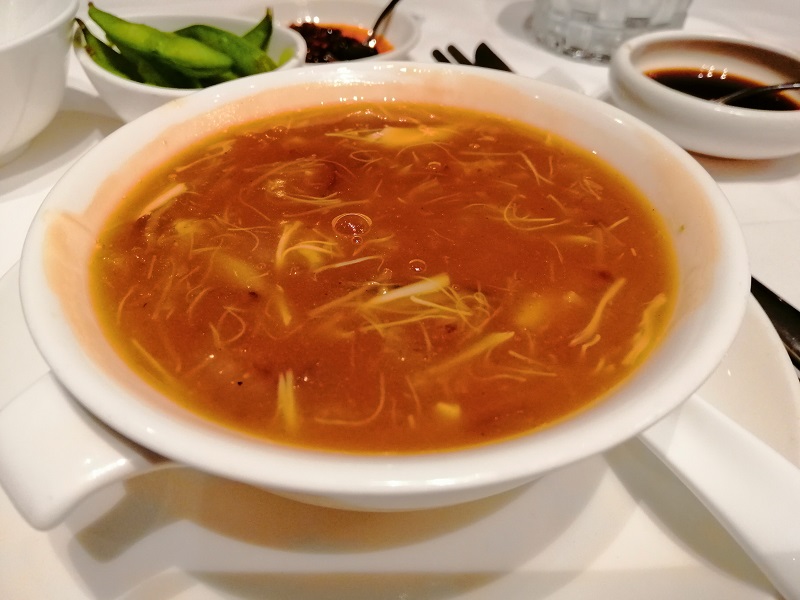 Crab Meat & Fish Maw Thick Soup in Teochew Style. This is a very fatty soup. It tastes like it’s made of pure collagen. So thick! So viscous! I felt I can overturn the bowl like a DQ Blizzard. The soup stuck to my mouth and coated my lips with intense flavor. I was at the border of loving it and hating it. I’m not sure how to feel. I’m confused! I’ve been reflecting on the soup for a few days and decided I love it as I’ve been craving for that insanely thick mouthfeel since. This was the best dish of the night. 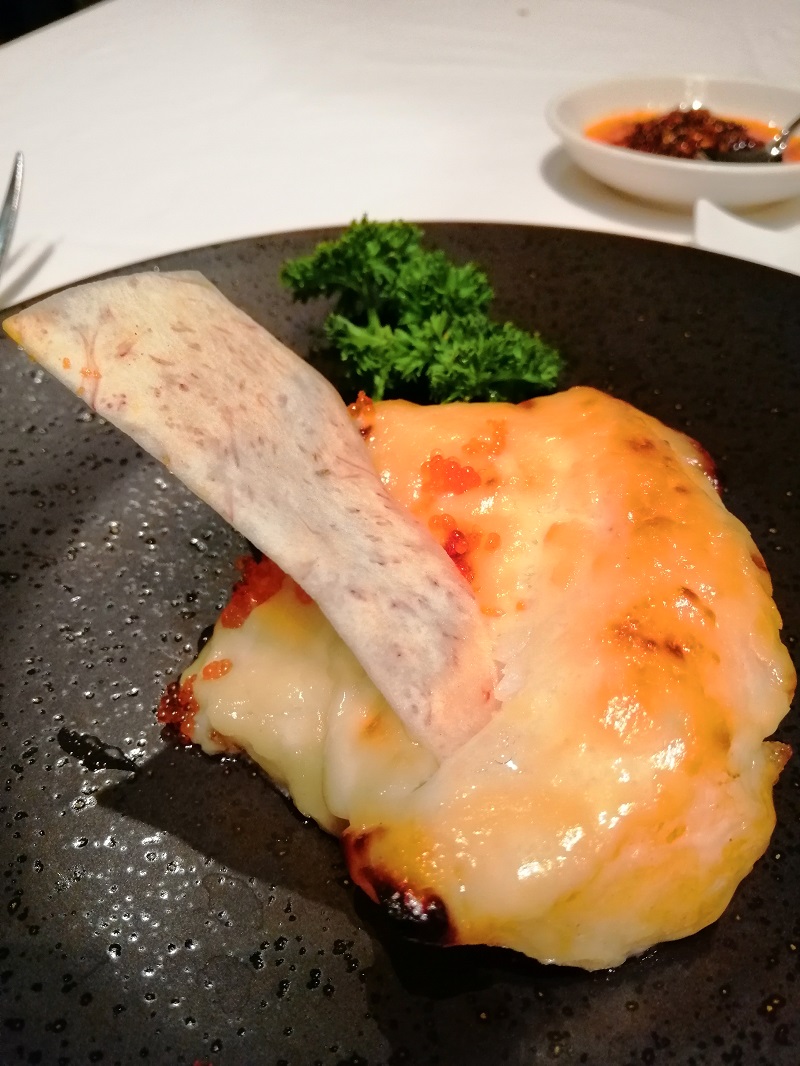 Baked Cod Fish with Miso Sauce. Did this taste delicious? No, it was merely competent. There’s nothing special about the dish. The tapioca chip and sprig of parsley looks out of place. To be fair, this wasn’t bad – I enjoyed the creamy, sweet sauce with the fish. But that’s the thing, it’s just acceptable. Adequate. Average. 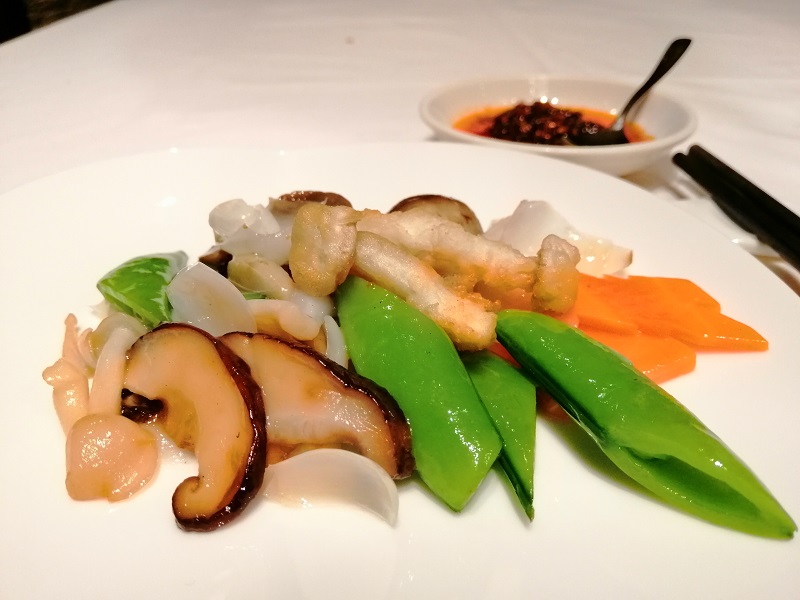 Sautéed Vegetable with Wild Mushroom. This one really pissed me off. It was literally a few scraps of carrot, peas and mushrooms in an unremarkably bland sauce. The only thing of note is the deep fried enoki mushroom, of which there were 2. The size of this vegetable dish is more or less the area of a credit card, and not much thicker! 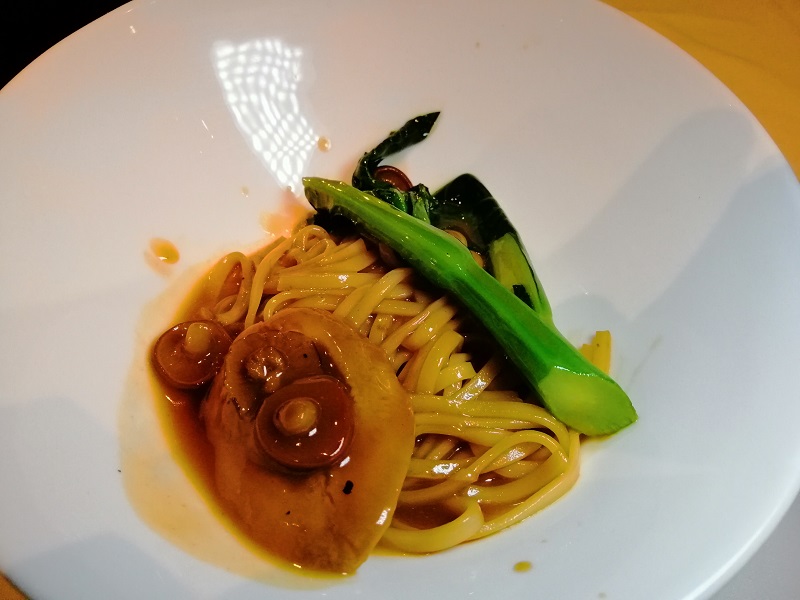 Stewed Handmade Noodle with Baby Abalone. The noodles were overcooked and under-seasoned. There was a lack of any appreciable flavor in this dish. The baby abalone was serviceable but there was nothing particular about it. The dish was edible for sure, but so middle-of-the-road that any hawker center could do a better job. I was so hungry I finished everything anyway. 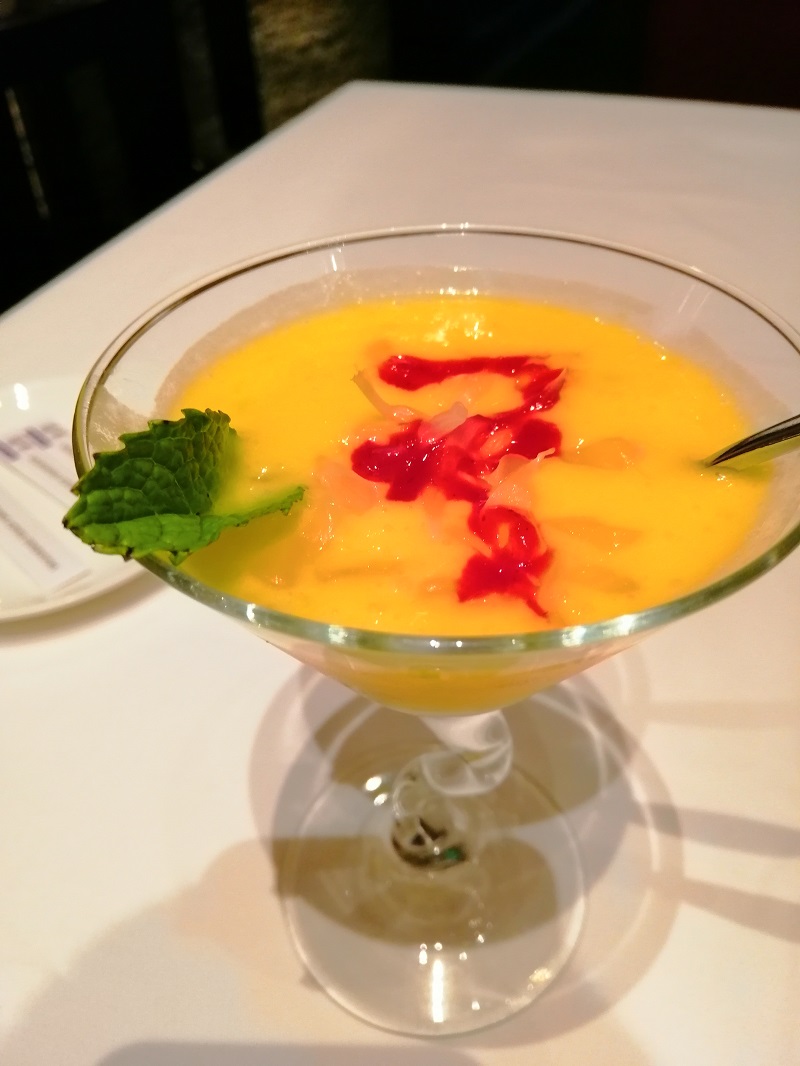 Chilled Mango Puree with Pomelo & Sago. This looks and tastes like a lazy cook decided to randomly toss in several leftover ingredients to increase the average cheque size. It was below my already lowered expectations, if that’s even possible. A sad end to a depressing dinner. The bill for dinner came up to SGD 107 (RM 327). 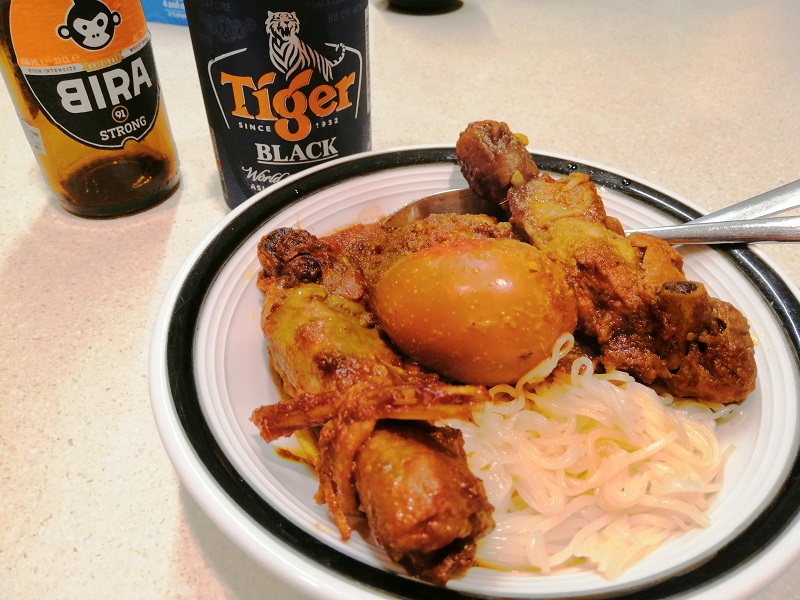 Dinner would have been cheaper if I had ordered a la carte. I’ll have a more filling meal too, but I wanted to check out their set menus, which is supposed to highlight their best dishes and abilities. Maybe that was my mistake. I had to destroy a bowl of leftover chicken and noodles my sister’s maid cooked when I got home coz I was still very hungry. The portions were way too small! 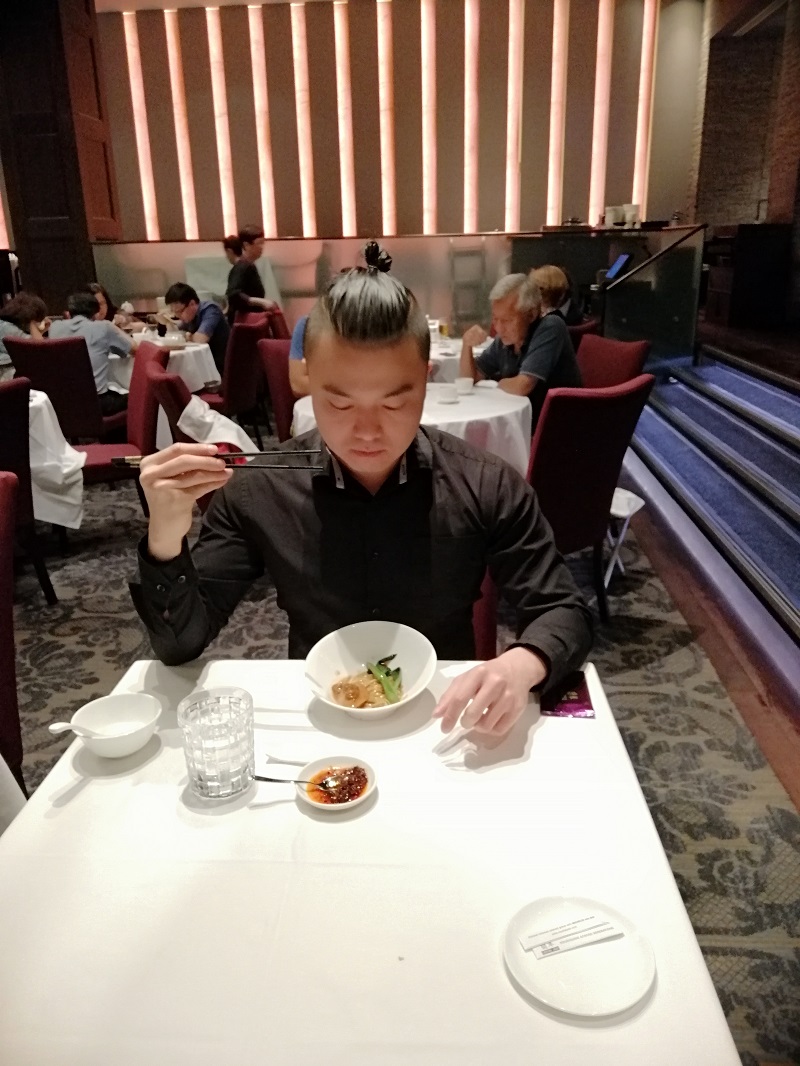 I don’t mind paying for exemplary food. My most expensive dinner was RM 1,615 at Gaggan and I walked away a very happy man. I recommended Gaggan to my sister and all my friends. I even sang praises to random strangers who didn’t ask. But it really makes me angry when I pay good money and receive middling, ordinary and subpar food. Crystal Jade Golden Palace was a letdown of epic proportions. I cannot un-recommend it enough.