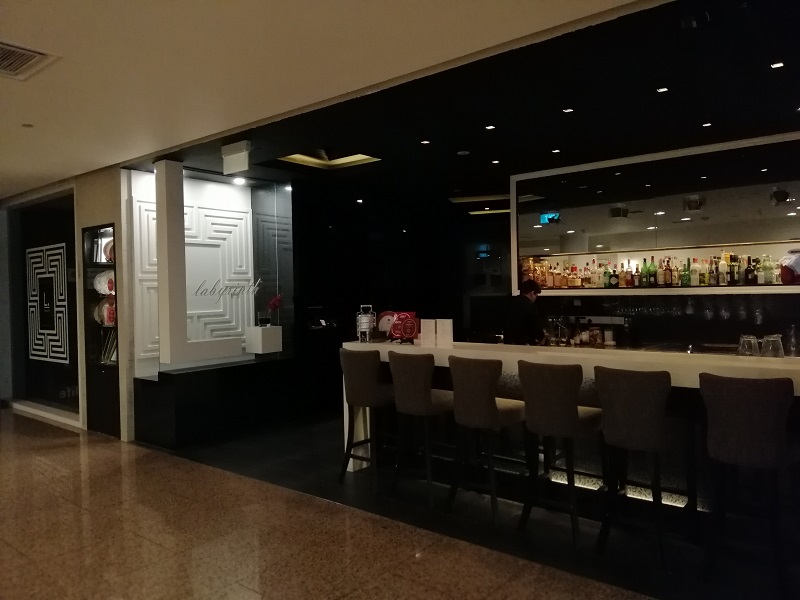 I have a soft spot for progressive cuisine. My favorite restaurant to date is Gaggan. I enjoy the modern take on Indian food – licking plates and eating with my hands felt fun and liberating. I was also impressed by Sra Bua by Kiin Kiin. Thus, I made sure to include Labyrinth in my latest Singapore trip. Labyrinth has 1 Michelin star and does a modern take on Singaporean cuisine, using many techniques from molecular gastronomy to propel local Singapore food into the 21st century. 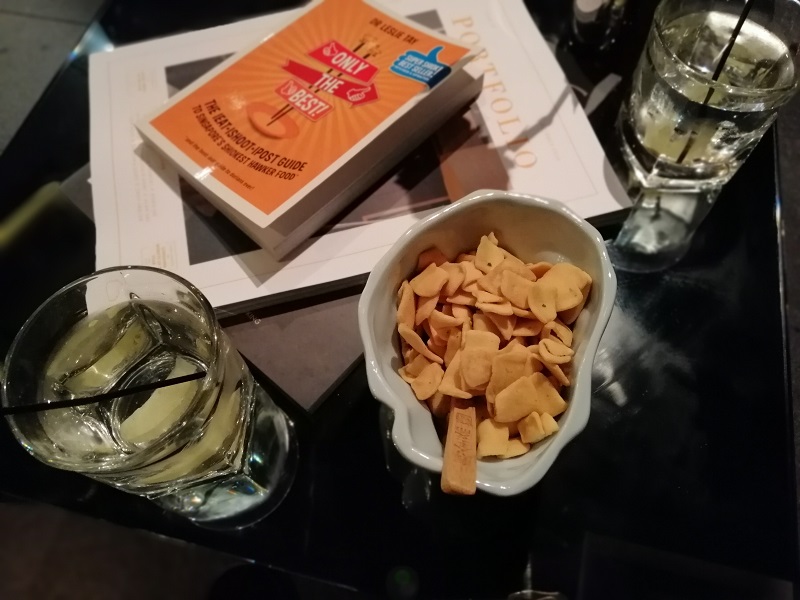 I came here with a friend for their Pre Theatre Menu (SGD 68) which is the same as their lunch menu, served at 6 pm. You’re directed to a lounge when you arrive and served murukku and apple flavored water. Service is a little stiff and formal from two of the waiters, like they aspire to a caricature of what they imagine French Michelin-starred restaurants are like. Having been to France and dined at Michelin starred restaurants in Paris, I can assure you it’s not like that over there. Some staff are really friendly though. 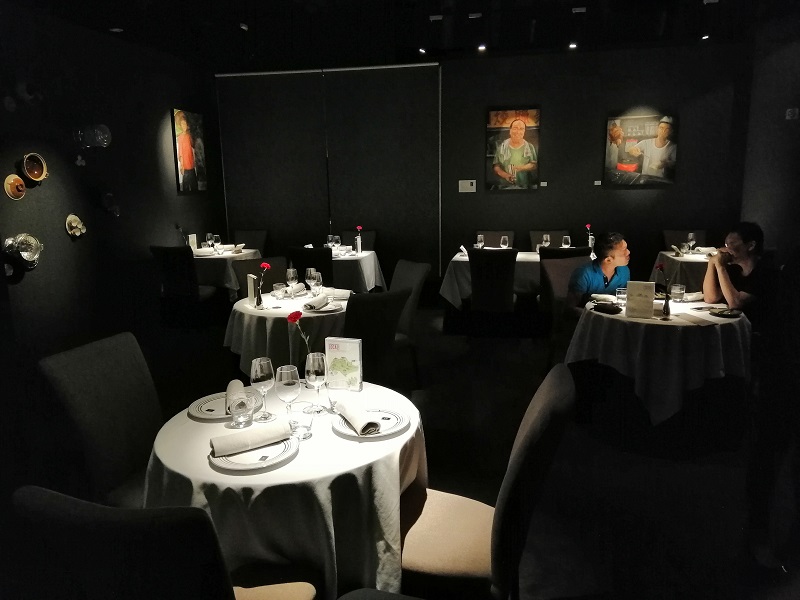 Unfortunately, one of the Indian or Malay waiters had a really bad case of halitosis, like there were pounds of ripe old tonsil stones stuck somewhere in his throat. That was a real turn-off in a meal setting. I usually don’t comment on things like these unless it affects the dining experience, and this did. I had to hold my breath while he explained the dishes and wait for the nauseating miasma to disperse before I could get started on my food. It was a real struggle. 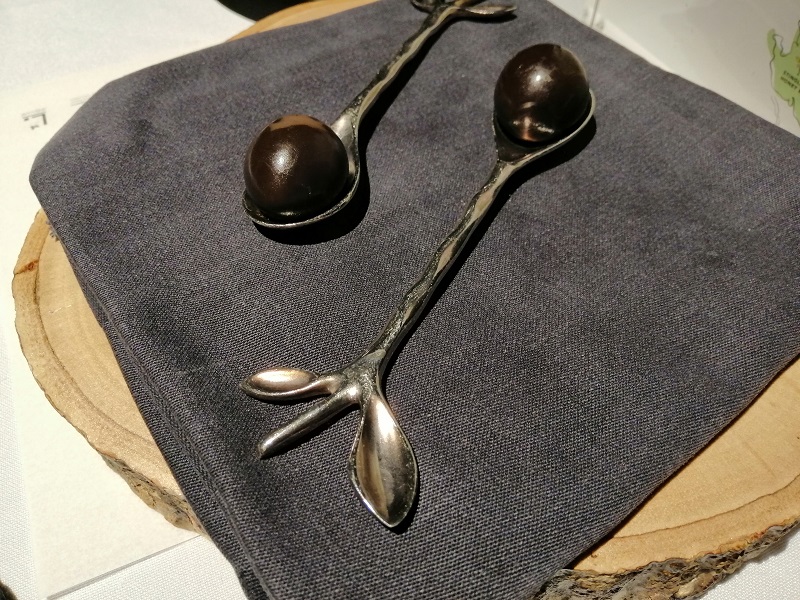 Dinner started with Oolong Tea Egg. This is described as “Uncle William’s quail egg” and it’s one of their signature items. It’s a quail egg with a liquid interior yolk which is not the yolk. The liquid has been injected into the egg to replace the yolk. It’s very smoky. I liked this. 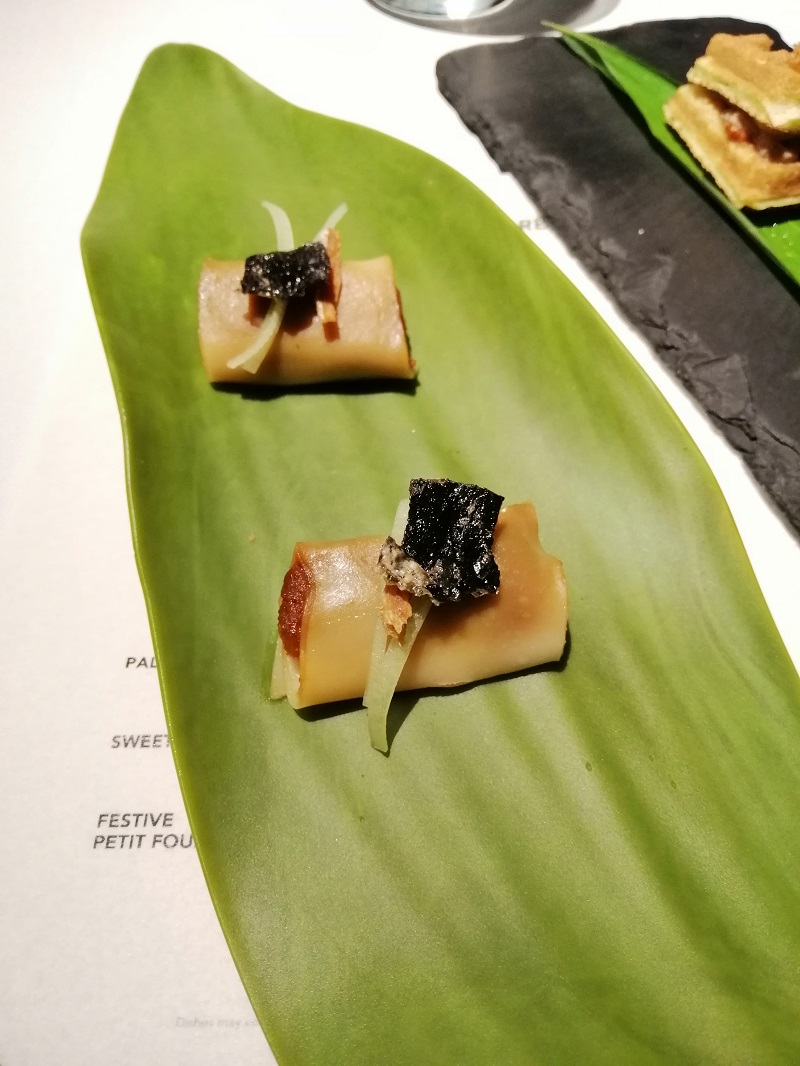 The second snack is “Nasi Lemak” Cheong Fun – chicken skin, ikan bilis and egg yolk gel. It’s a soft pillow of chee cheong fun (CCF) that tastes like nasi lamak due to the spicy anchovy sambal inserted inside. The egg yolk gel coats the CCF bite to add some creaminess and the crispy shard of chicken skin provided a nice texture. Decent. 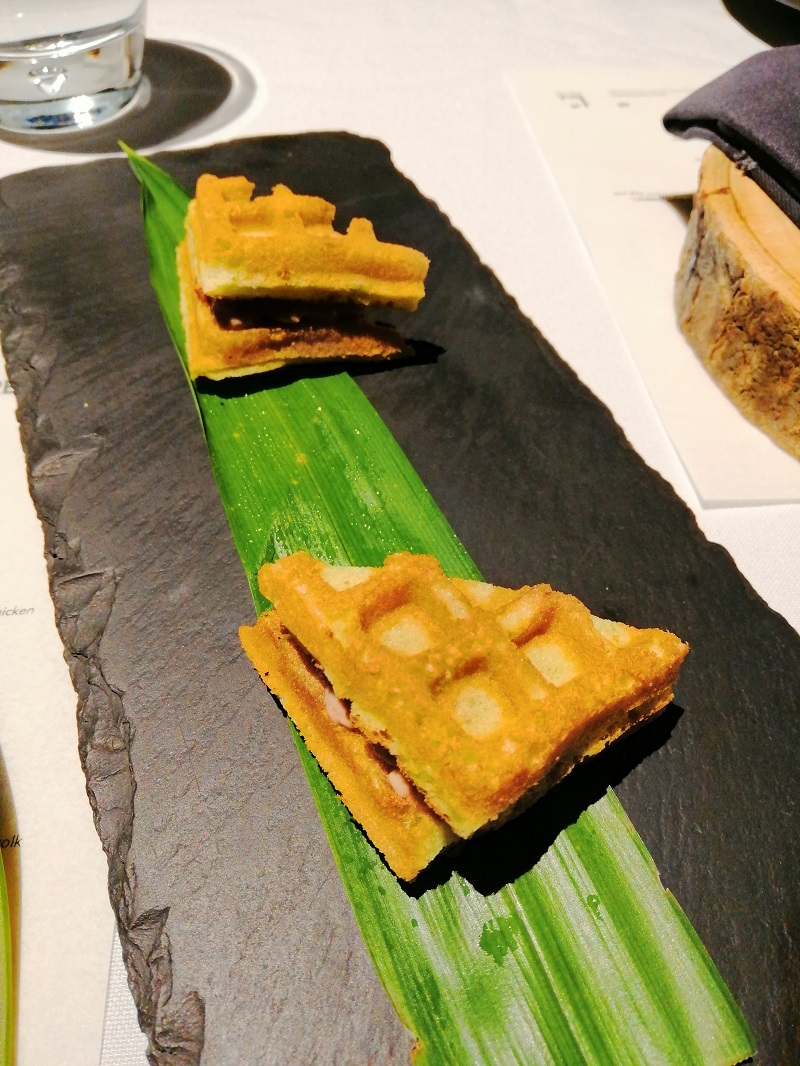 Heartland Waffle ended the trio of snacks, described as local chicken liver pate and goji berry jam. The waffle is soft and fluffy. Pay attention KFC! This is how you should do a waffle!! It has a strange, intense flavor from the liver and goji berries that I didn’t like at first, but I enjoyed it after chewing for a while. It’s very tasty. This is the best one out of the three starters. 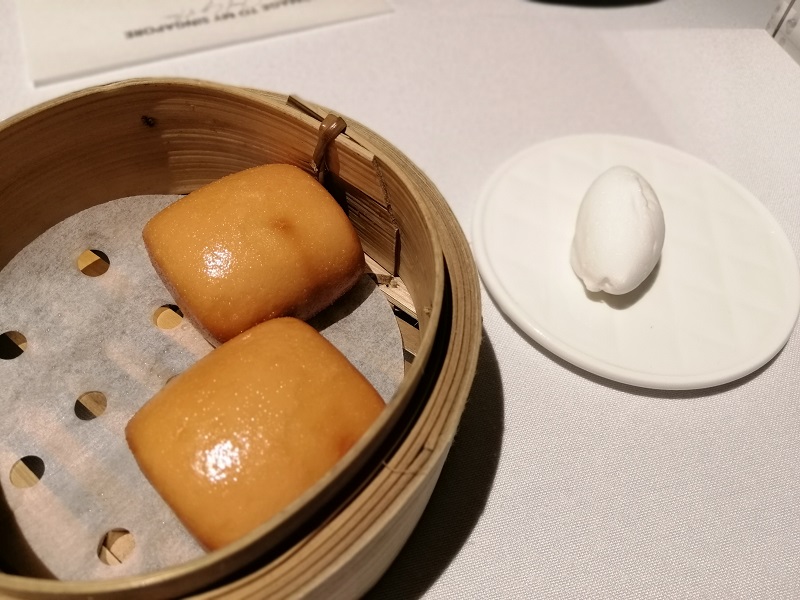 There was a complimentary snack described as coconut butter with deep fried buns. These are the same mantou you’ll see served with chilli crab in Singapore. It was a nice flavor but it’s not ready for prime time yet. The butter was very hard to spread. My friend called this “experimental” which is the best way to describe the dish. I told her I’ll be stealing that word for my blog. 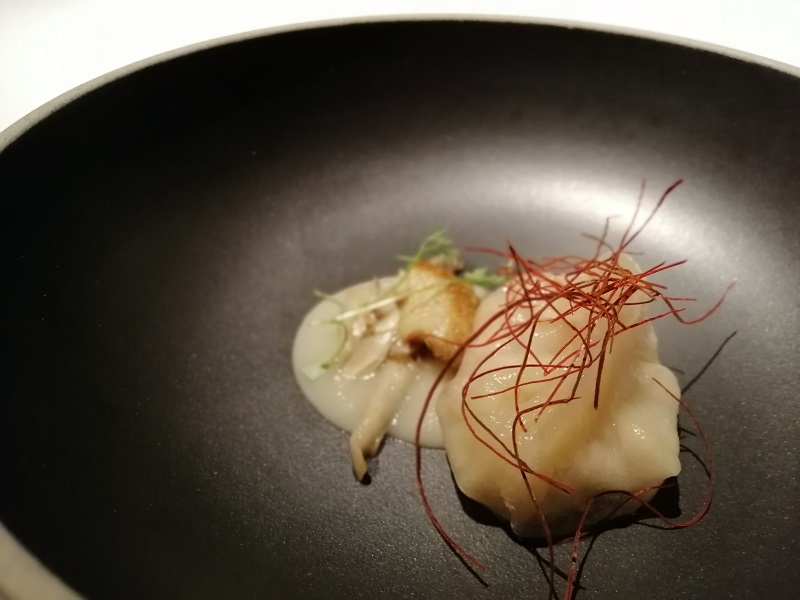 The plates sequence started next with “Ang Moh” Chicken Rice. This is another one of their famous dishes which features home-milled rice flour, grandma’s chilli sauce and braised chicken. There are chilli strands on top of the dish, which reminds me of A Noodle Story. The dish tasted interesting but it’s not my favorite thing. It is remarkably similar to one of my failed meal prep dishes – creamy chicken. 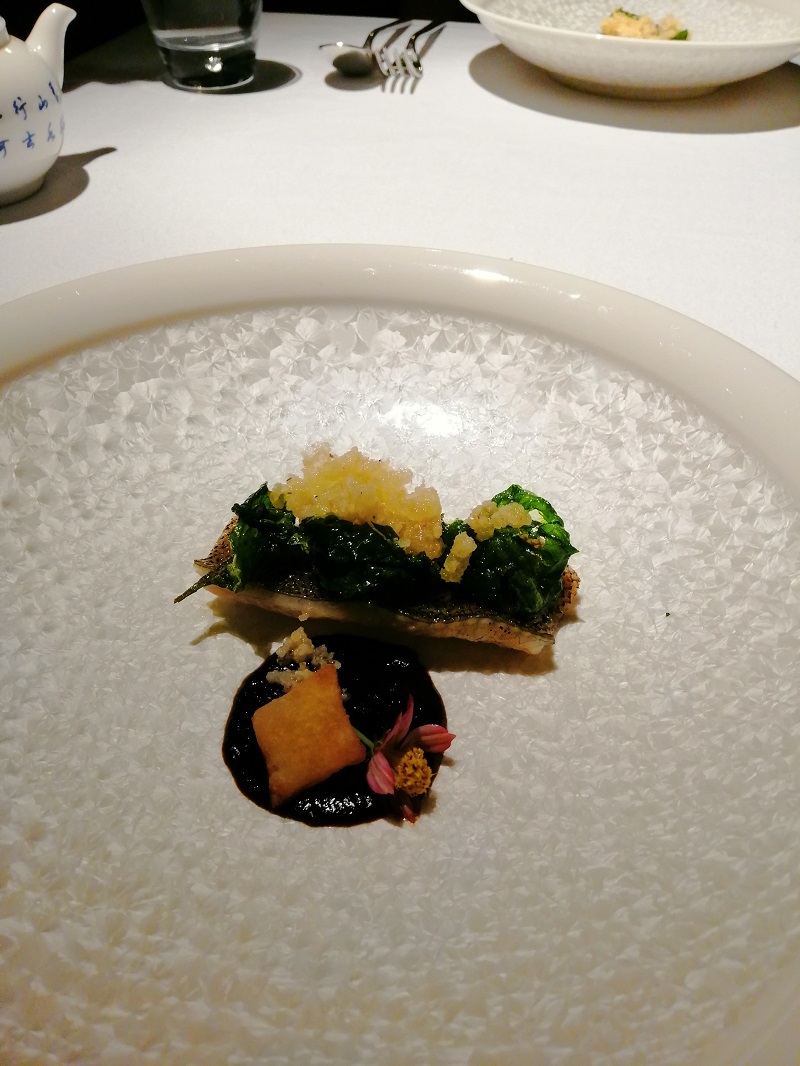 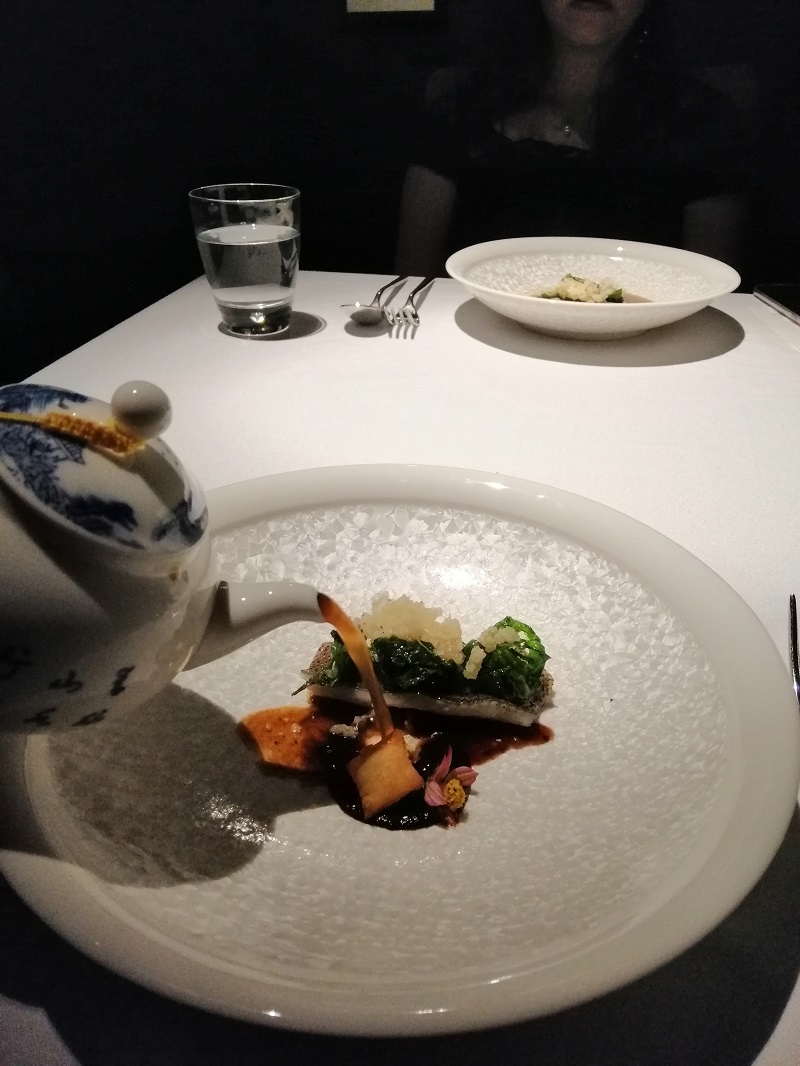 …then the BKT broth is poured out of a teapot tableside. 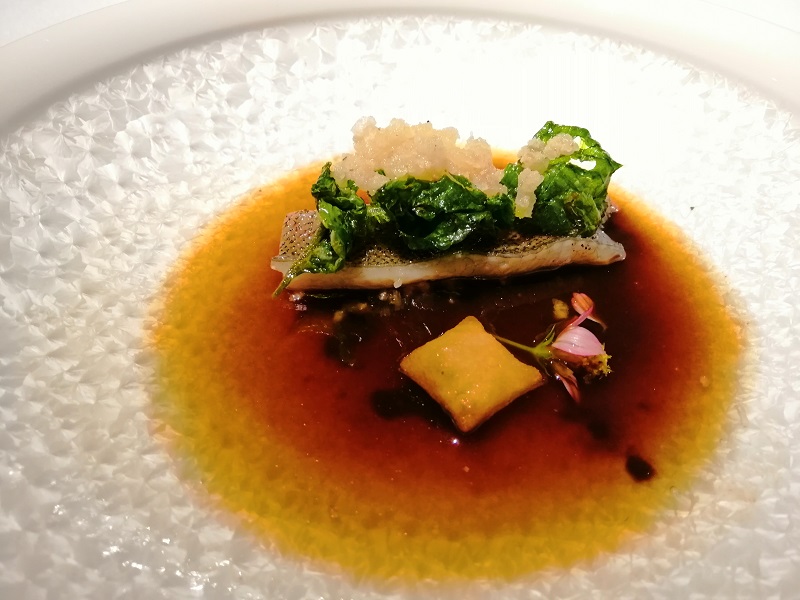 This was my favorite dish of the night. The fish was cooked well and tasted good. I enjoyed the crispy vegetables on top of the fish. I thought the deep fried vegetables were a little too oily but overall, this creation has very nice flavors. I love the sweet herbal soup. 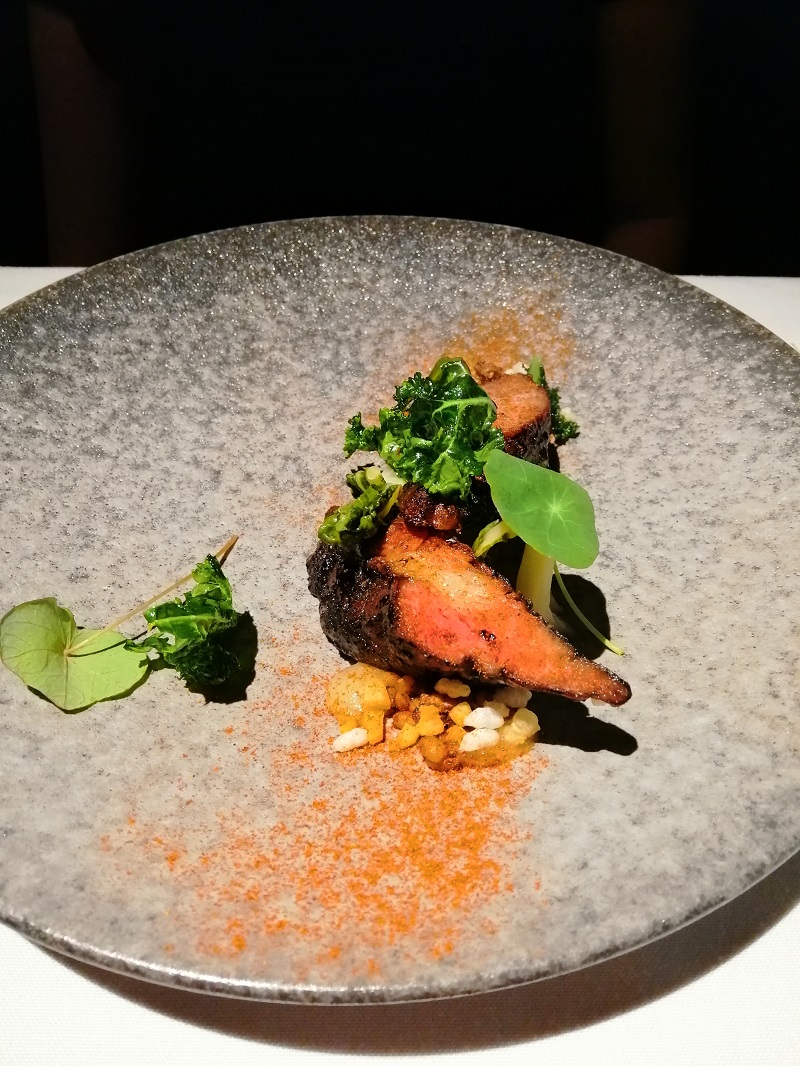 There are two options for your main. My friend went for the Indonesian Pork Collar. It’s char siew, mixed greens, kale and pickled bak choy. I liked the fatty char siew and the flavored dust. It’s delicious but I don’t think I’ll enjoy eating the whole thing since the fat and sugar will be a bit cloying after a few mouthfuls. The pickled bak choy is very important for cutting through the rich flavors. 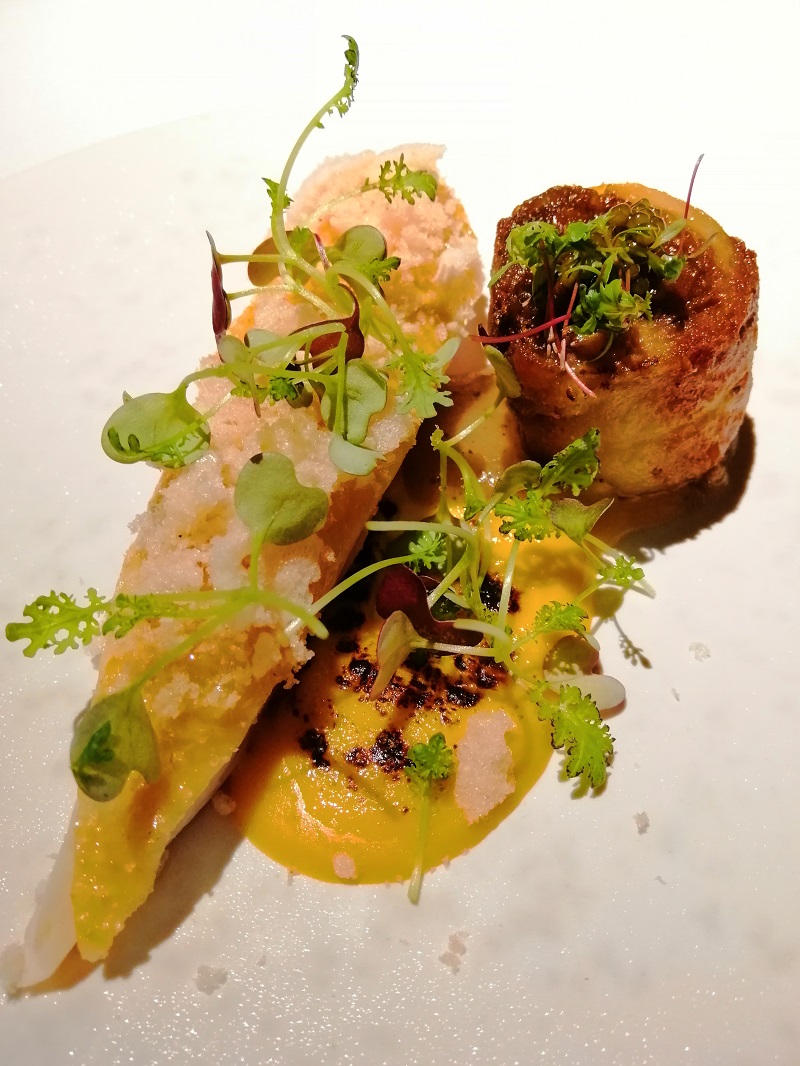 I had the Toh Thye San Farm French Poulet (SGD 10 supplement). This is a Cantonese style roast chicken with glutenous rice and egg yolk from Freedom Farm. There are two parts to this dish – the fillet of roasted chicken and the medallion of sauced chicken inside glutenous rice. I liked the latter but the former tasted a bit plain. I thought it was sous vide chicken but the waiter told me it’s been cooked for 5 hours at 55 degrees Celsius in the oven with sugar on the skin to crisp it up. There are crispy prawn cracker crumbs on top, which I thought was a nice though. 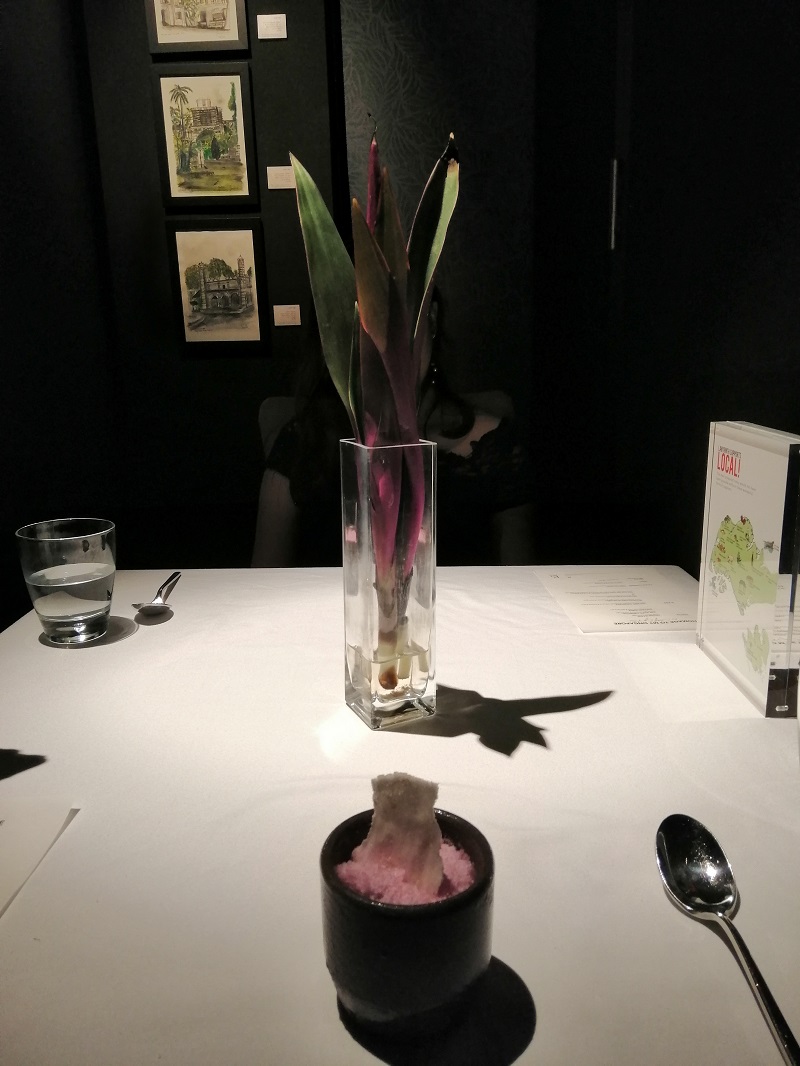 Next up came the palate cleanser called Clam Leaf Snow made with rosella meringue and textures of grapes before the dessert course. Our waiter even brought out a rosella plant so we could see what it was made from, but this felt more like a rehearsed, robotic scene than a genuine attempt to add value, which I experienced at Waku Ghin and Shinji. 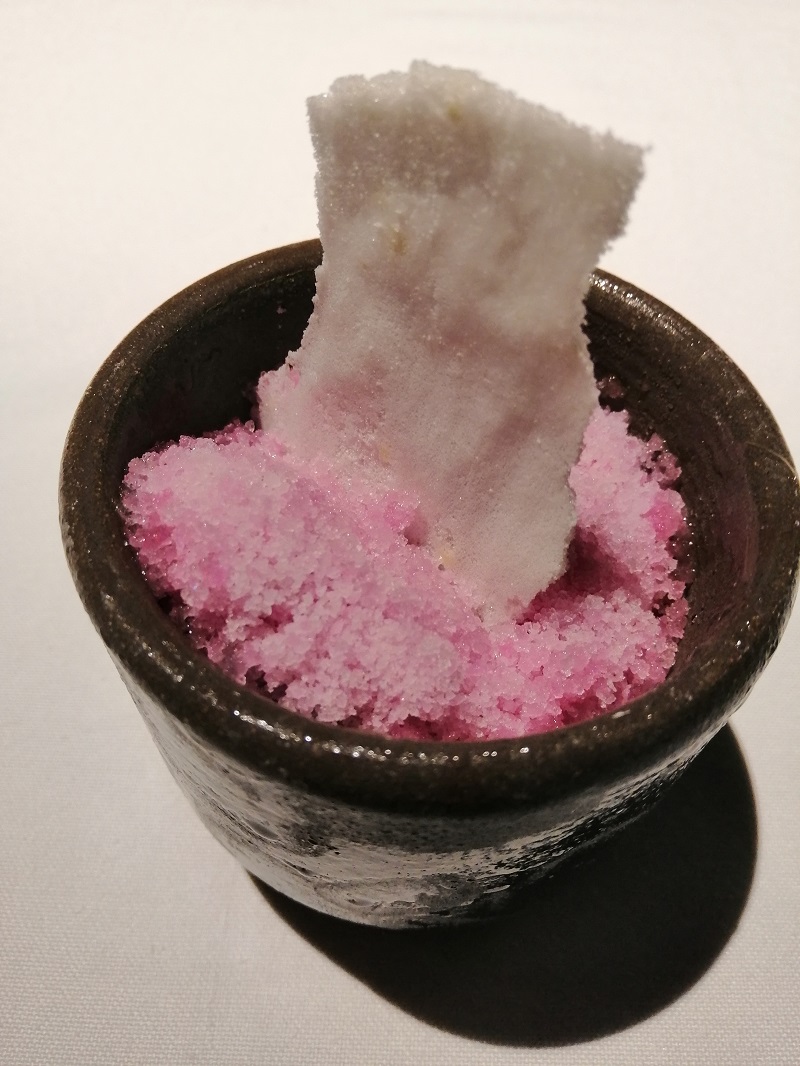 I did enjoy the palate cleanser though. It was quite good for something meant to just reset your tastebuds. I particularly liked the fruits at the bottom. 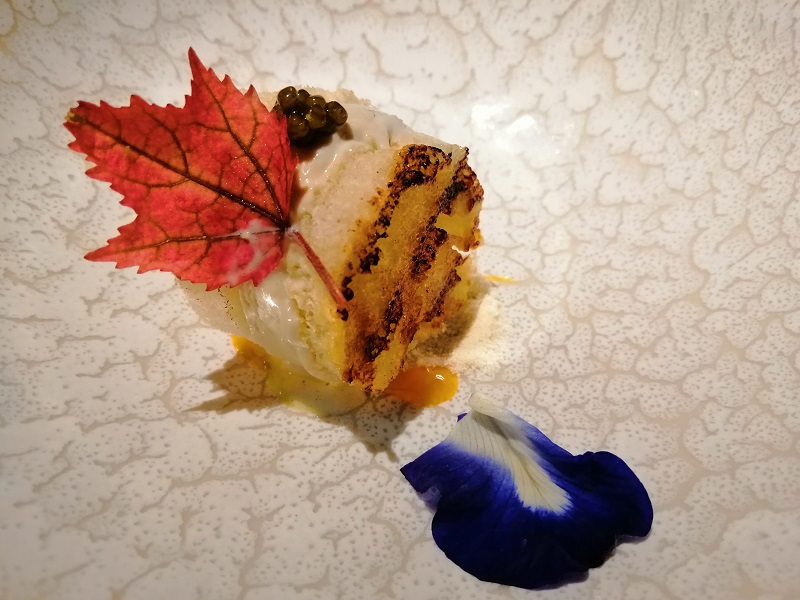 The dessert course was Cristal De Chine Caviar, basically a modern interpretation of kaya toast. It is made with kaya ice cream and Sing Hong Loong toast. This was excellent! I love the crispy bread the nice caramelized kaya ice cream. The kaya is salted too so there’s burnt notes and salty notes. I also enjoyed the hot (bread) and cold (kaya ice cream) temperature play. The edible miniature maple leaf was a nice touch. 10/10. I’ll eat the hell out of this if they served it separately. 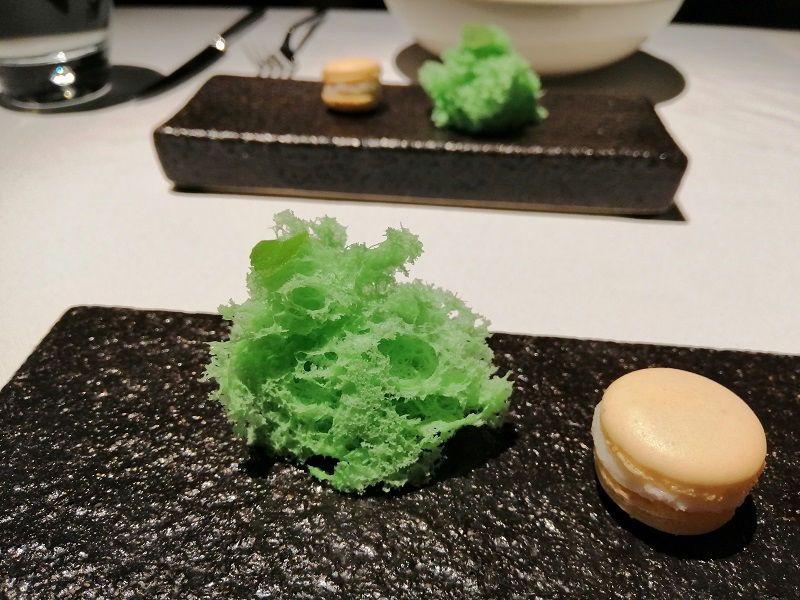 Labyrinth ended the dinner with a duo of seasonal treats. The petit fours were durian macaron and chiffon pandan. The durian macaron is very strong tasting. Even though I like fresh durian, I’m not a fan of durian desserts. It’s a no from me. The chiffon pandan was a plain, unsweetened hunk of cake. I think it’s supposed to be a palate cleanser after you eat the tiny durian macaron. 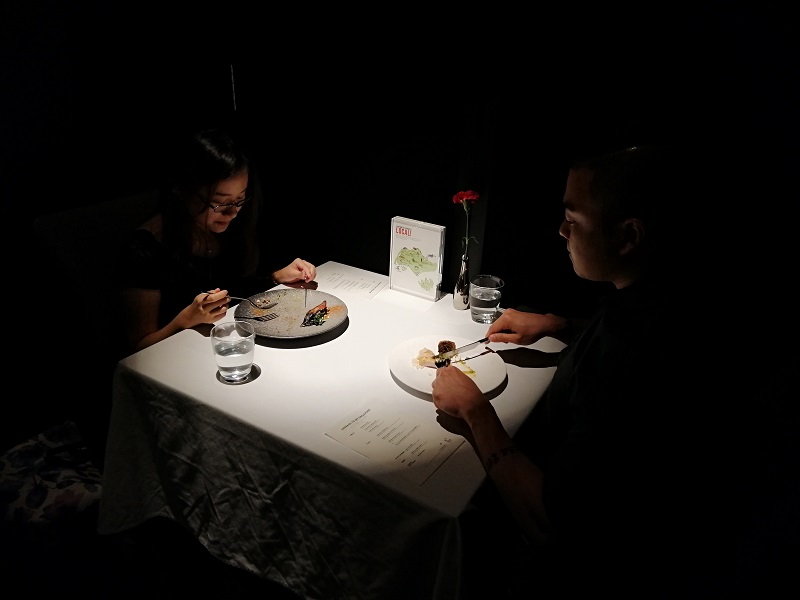 The bill came up to SGD 172 (RM 524) for two. The dishes at Labyrinth tries to be creative for the sake of being creative. A lot of the techniques were unnecessary and forced into the dish to provide some pizzazz. The smoke-and-mirrors felt like an attempt to divert your attention away from the very average food. There was nothing extraordinary about the taste or execution of most dishes. It did not make me want to return. Labyrinth would have gotten into my Bottom 3 if not for Shisen Hanten, The Song of India and Crystal Jade Golden Palace.