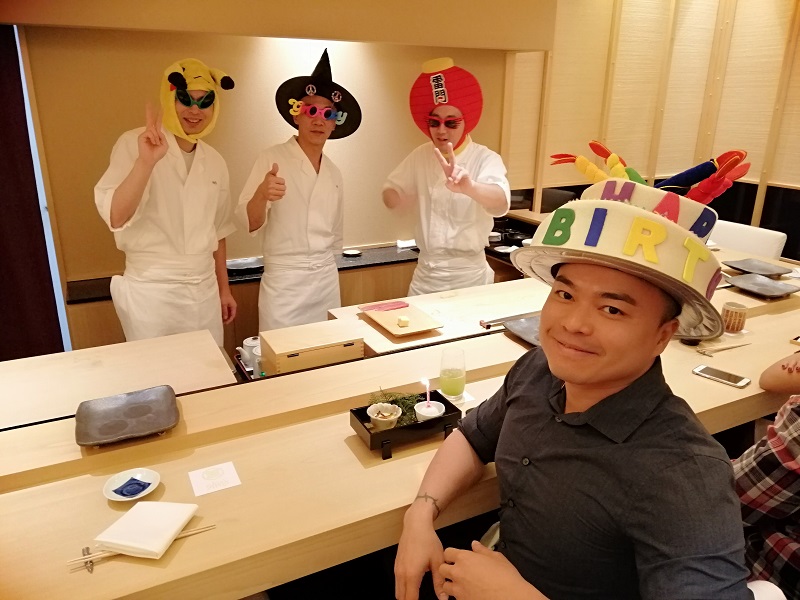 I celebrated my birthday at 1 Michelin star Shinji by Kanesaka in Carlton Hotel, Singapore. I lied. It’s not my birthday. In my defense, the Shinji staff gave me a juicy opening by asking if I was celebrating anything special when I made the reservation. Wanting to see what they do, I said it was my birthday. I know, I’m terrible. I did feel slightly bad after the whole shebang they did for me. More on that later! 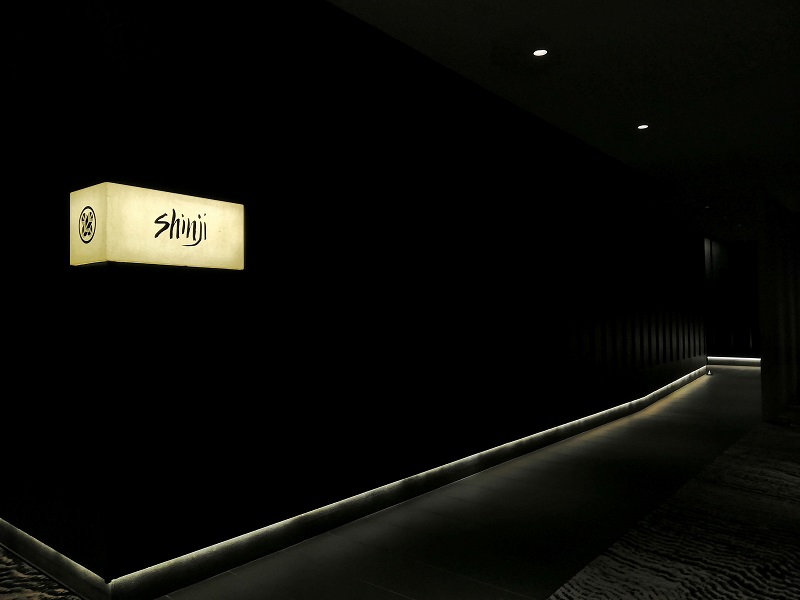 There are two Shinji restaurants in Singapore – one at Bras Basah (Carlton Hotel) and the other at Tanglin Road (St Regis). Both have a Michelin star! I went to the one at Carlton Hotel coz they have a really good value SGD 75 sushi lunch. This Hana tier is only available here and has 9 pieces of sushi and other dishes. I got way more than 9 pieces but I’m uncertain if that happens to everyone or coz it was my “birthday”. 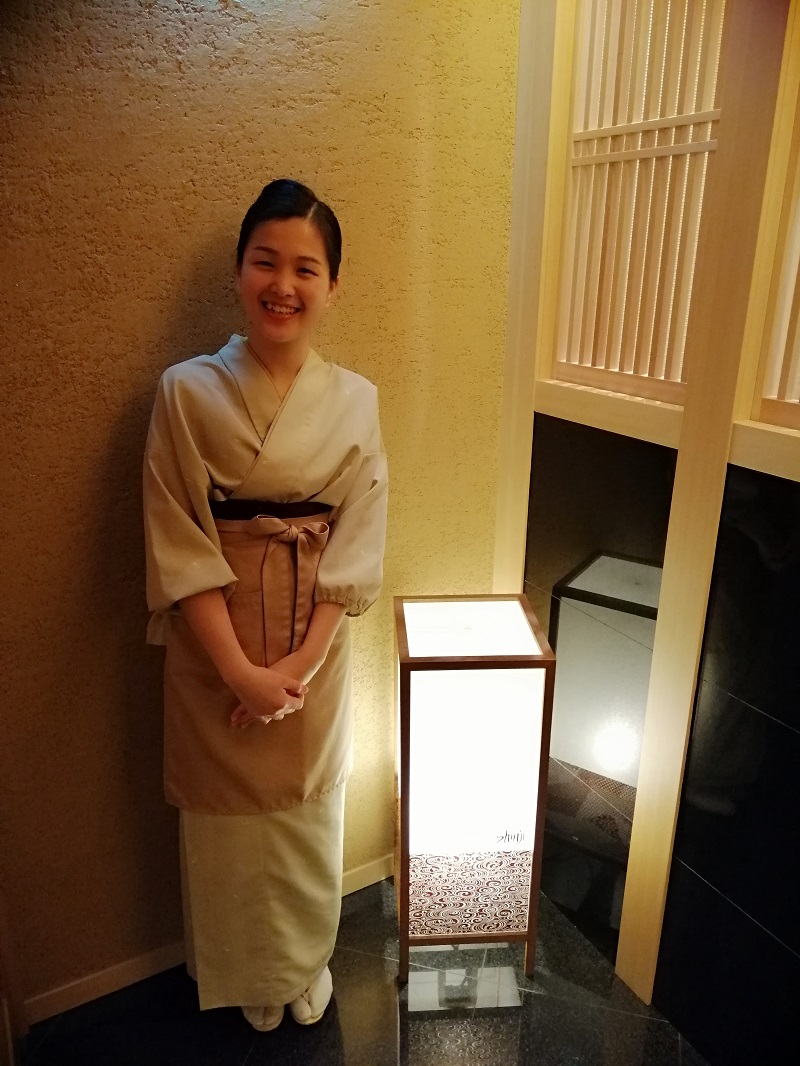 The chefs are all from Japan and even the waitresses are all Japanese! Service was extremely courteous and attentive. The waitresses stand behind you and refill your complimentary green tea before it even has a chance to run low. Finger towels are provided and replenished once dirty. They do everything with a warm smile and a kind word. The chefs can all speak English well enough to understand the questions you ask. 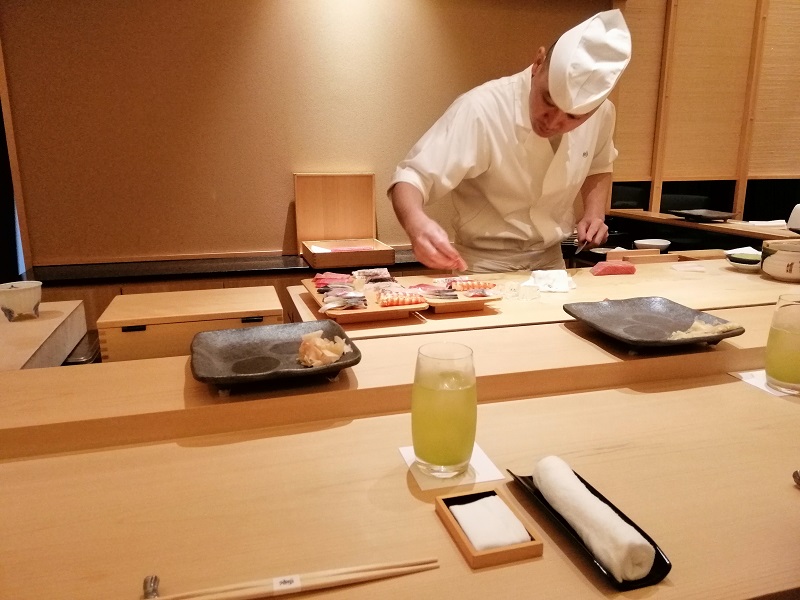 I was seated at the long sushi counter by request coz I wanted to see the chefs working in front of me. I like the idea of having each individual sushi delivered to me once it’s made instead of being put on a platter like you’ll get at the tables. I saw the sushi chefs using ice cubes to rub down their table every now and then and I wondered why they did that. The chef said it’s to keep the working area wet. 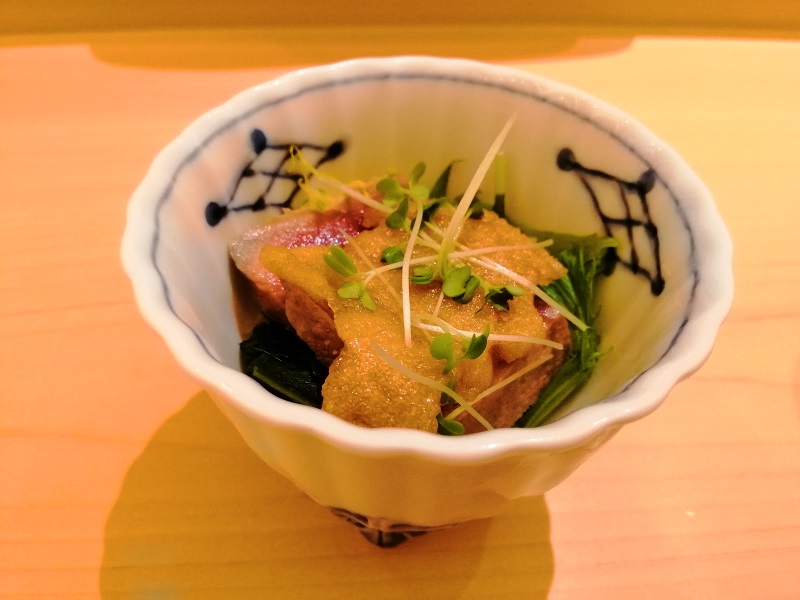 The meal started with a bowl of lean tuna with soy bean skin and vegetables. There’s some seaweed and sprouts. It’s a complimentary starter that goes very well together. The flavors are mild but umami enough to whet your appetite for the proper sushi courses. 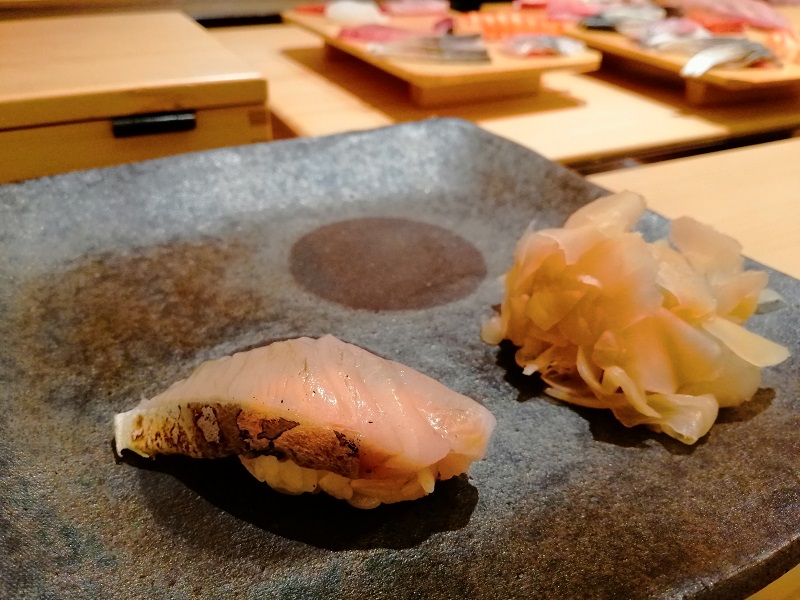 Spanish mackerel was the first sushi. It’s very, very smoky. I asked the chef how it’s possible that a raw piece of fish tastes so smoky and he said they hold the mackerel on top of a binchotan grill – not low enough to cook it, just enough to absorb the smoke aromas. Interesting. 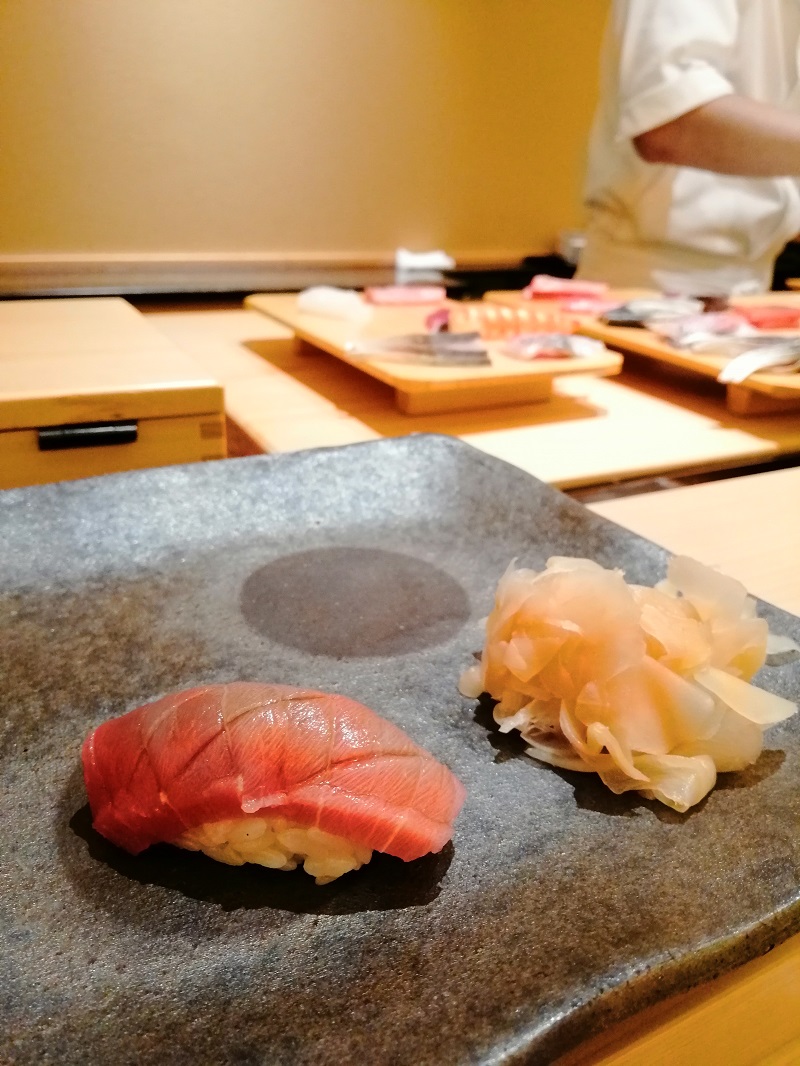 Next up was chutoro. This is the medium fatty part of the tuna. The fat gives the fish a nice texture. I actually prefer chutoro to otoro. Delicious. 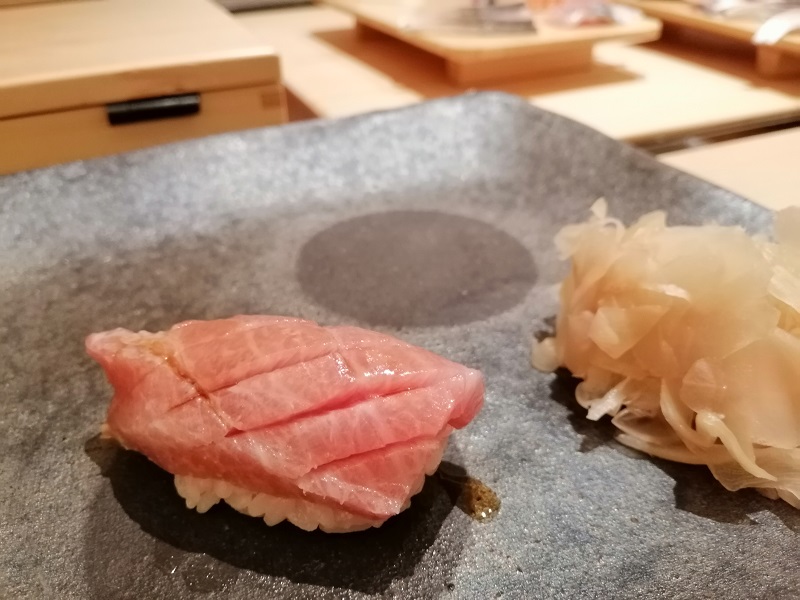 Otoro sushi came after and it’s a super fatty cut of tuna. The piece of tuna literally melted in my mouth. Yum. 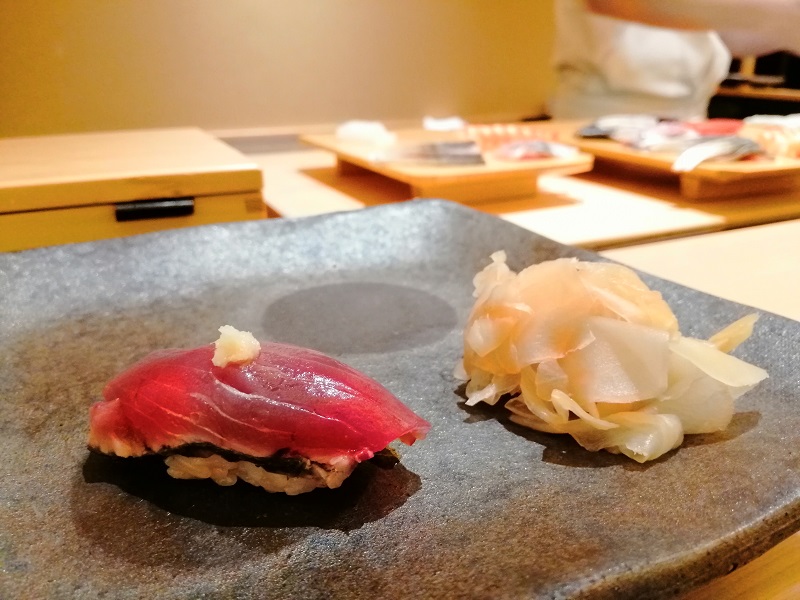 Bonito. The chef dipped the fish in shiso leaf shards before putting it into the shari (rice). You can see the flakes at the bottom of the fish. This was the least impressive sushi to me taste wise, but still good. 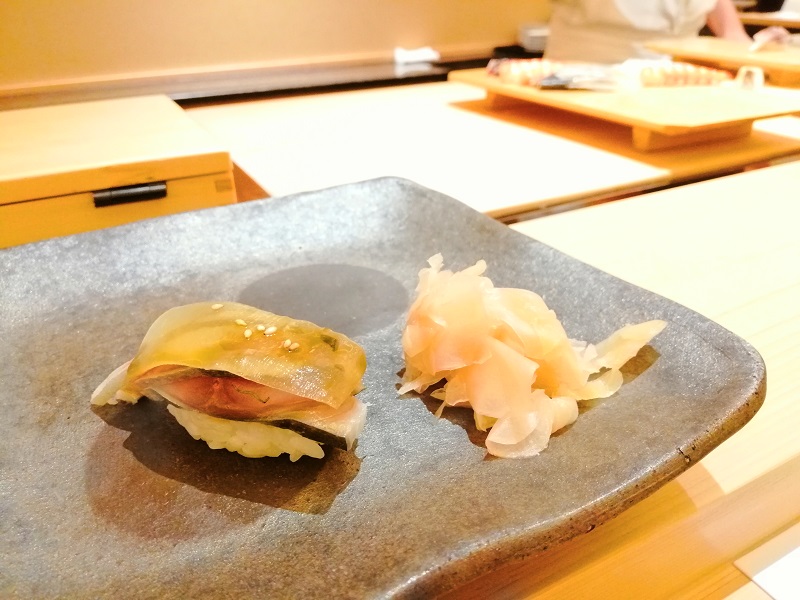 This is aji or horse mackerel. There’s a strong onion flavor from the onion oil that they brush on top of the slice of fish. The fish is topped with a thin slice of sea kelp. Mmm…they go swimmingly together. Geddit? Haha. 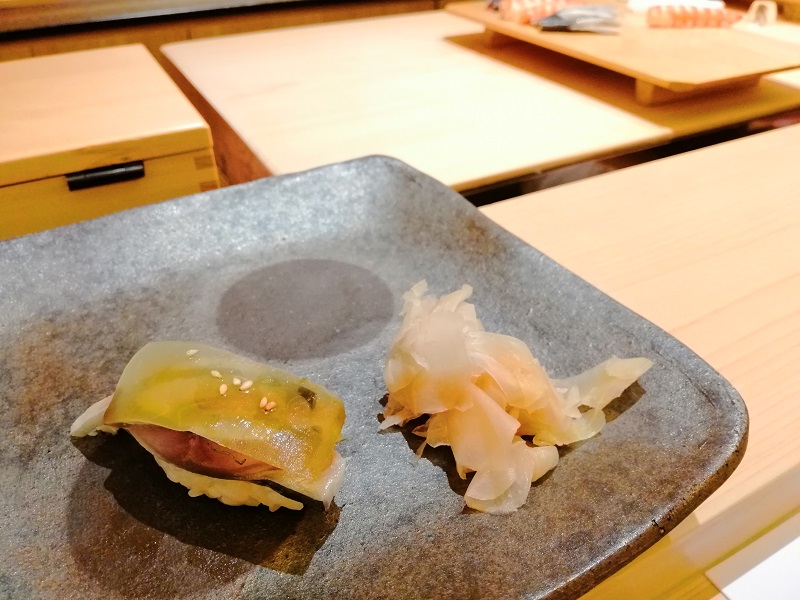 No, I didn’t post up the same sushi by mistake. This is saba or mackerel. I also wondered if the chefs made a mistake by serving two identical pieces of sushi to me, but they said the fish inside is different – one is aji, the other is saba. No matter, it was delicious. 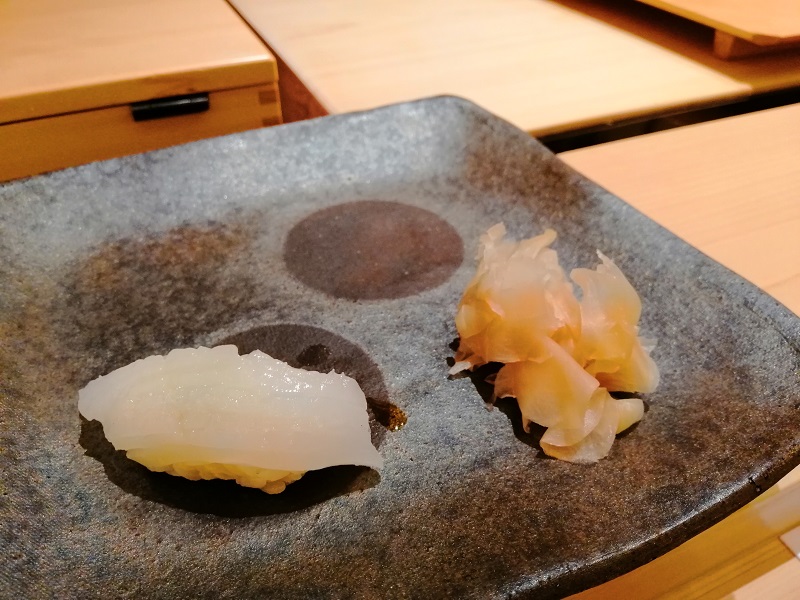 Squid sushi was insanely creamy. Very yummy. The chef put a dab of wasabi underneath the ika (squid) so there’s a nice kick to this. One of my favorite pieces during lunch. I love raw squid. 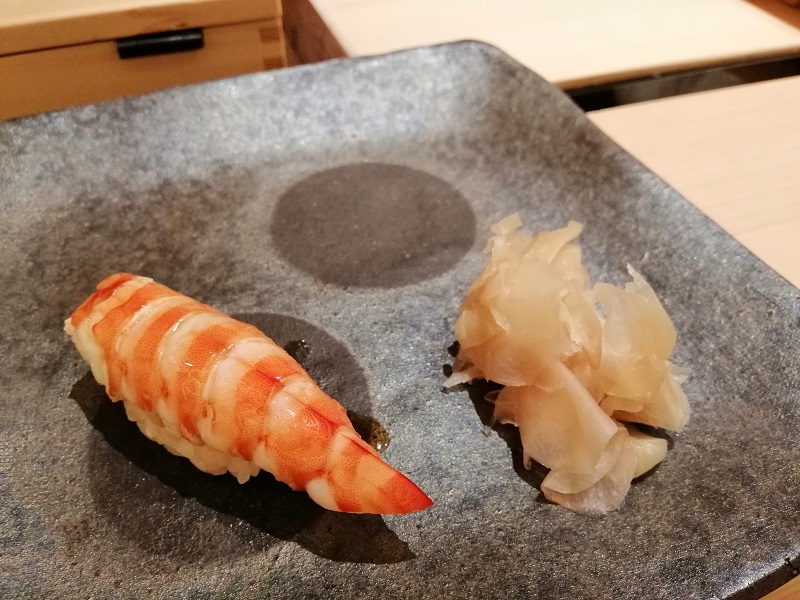 This is the only item that wasn’t flown in from Japan. It’s local tiger prawn sushi. Wow! I love the sweet sauce they cook this prawn in. It’s perfectly cooked, very tender, not rubbery at all. The tiger prawn is also naturally sweet. Excellent. 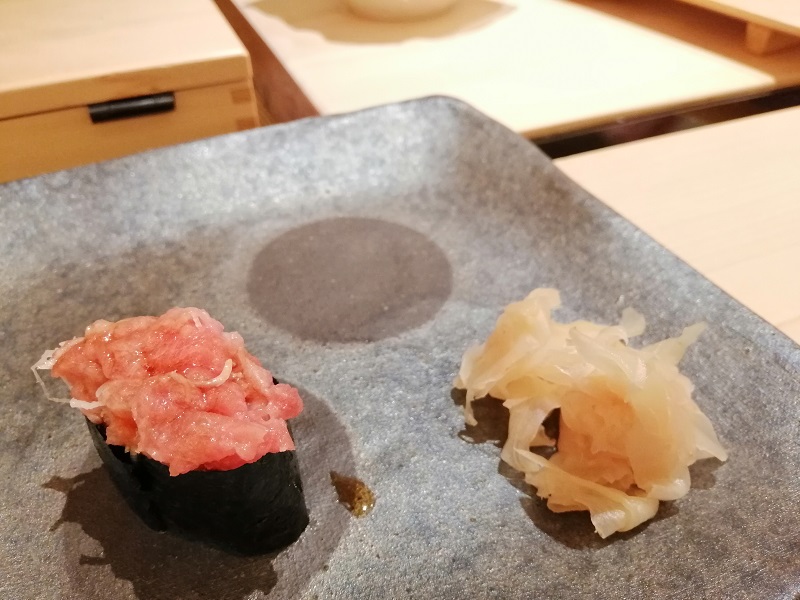 Negitoro gunkan. Negitoro is a combination of tuna offcuts and spring onion. These are the stray pieces of tuna you’ll get after cutting off beautiful slices for sashimi and sushi. Perfectly edible, just not as nice looking so it’s chopped up and mixed with spring onions. I like it. 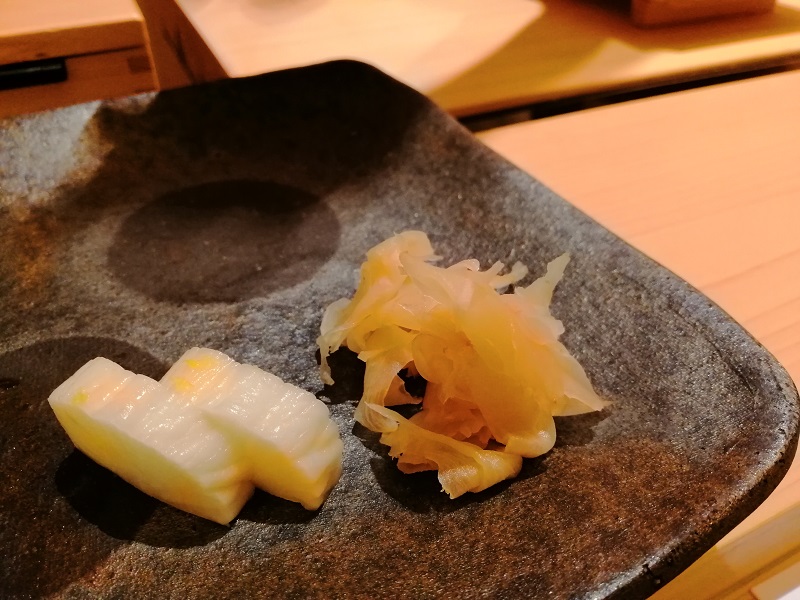 These are radish pickles. The chef grated lemon zest over these carefully before serving it to us. It’s a highly unusual flavor combination that I’m not used to. Not my favorite thing but I’m glad I tried it. It also acts as a palate cleanser of sorts. 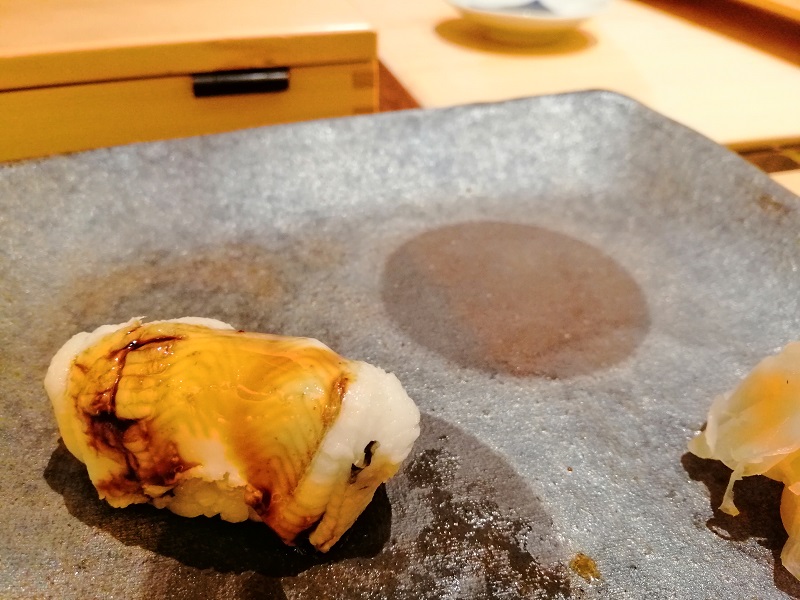 Anago or salt water eel. This is a very delicate and mildly flavored piece of sushi. I could barely taste anything. Highly unusual. Maybe this is the effect of the pickles from the previous course. The eel slices are very generous and tasty though. 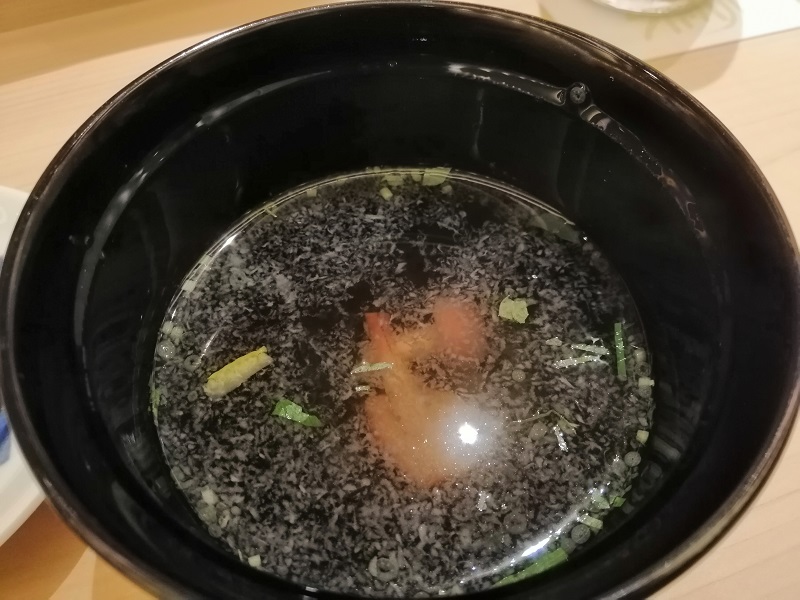 This was followed by a soup course to warm the stomach. The soup is filled with nameko mushrooms and tasted very peppery. It’s perfect after the bland-ish anago sushi. I can see they put a lot of thought into the entire course. 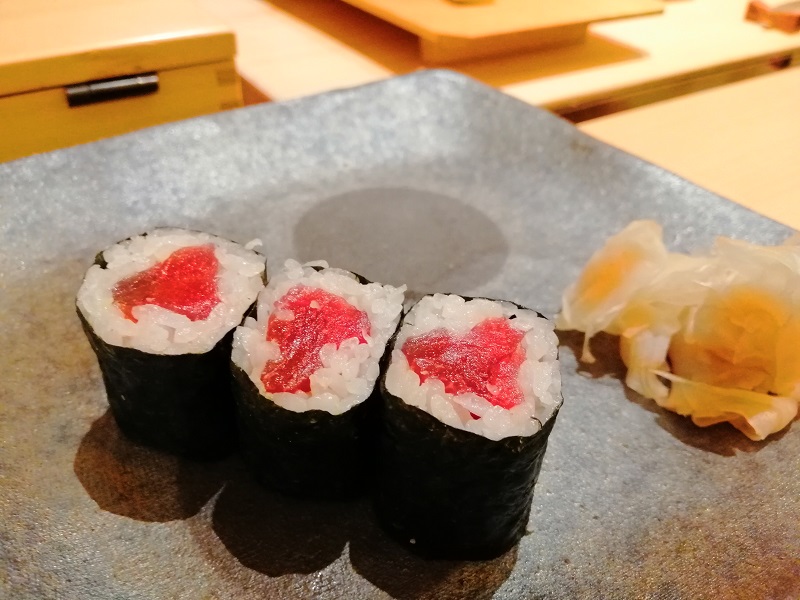 The chef asked me if I was still hungry after my soup and I told him I can still eat. This tuna roll was a complimentary course to fill you up if you’re not full. It tasted quite pedestrian but I understand the purpose of the course. You don’t want customers to leave hungry. It was the only dish that the chef provided soy sauce for. I appreciated the gesture in ensuring I leave full and happy even though the roll wasn’t anything special. Two thumbs up. 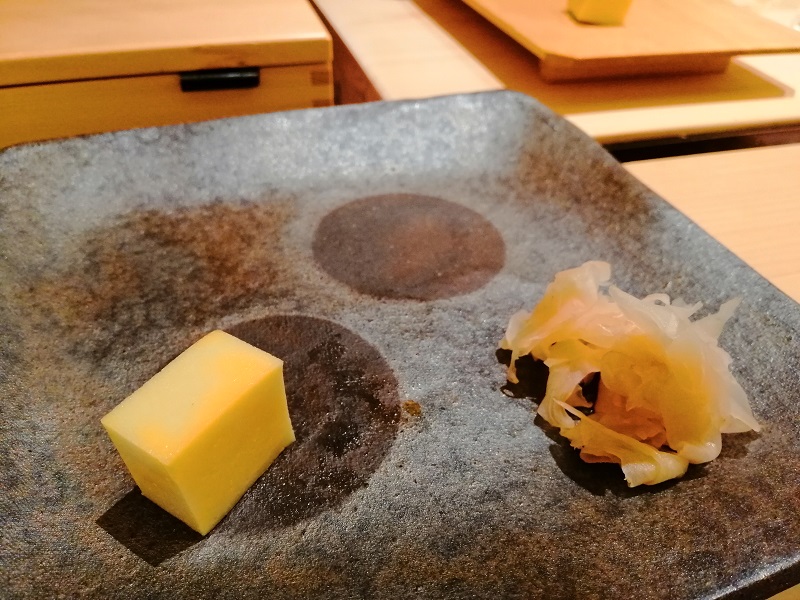 Lunch ended with the obligatory tamago (egg omelet). Shinji’s version tasted more like a jelly than an omelet. The texture was very interesting! Unusual but delicious. I enjoyed this unorthodox take on the tamago. 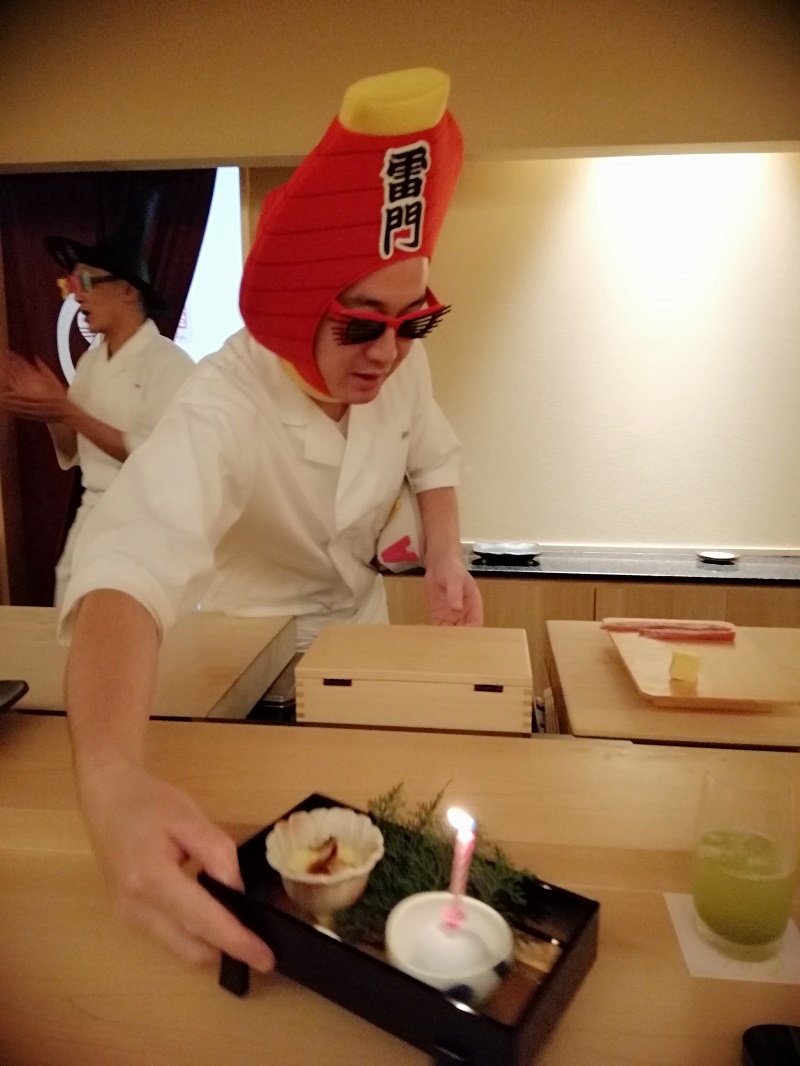 I asked for the bill and was puzzled when it didn’t arrive in a timely manner. Before I could prompt the waitress again, the lights turned off and the chefs disappeared, only to reappear seconds later with funny hats and lighted candles. Omg! I totally forgot I said it was my birthday when I made the booking two months ago! 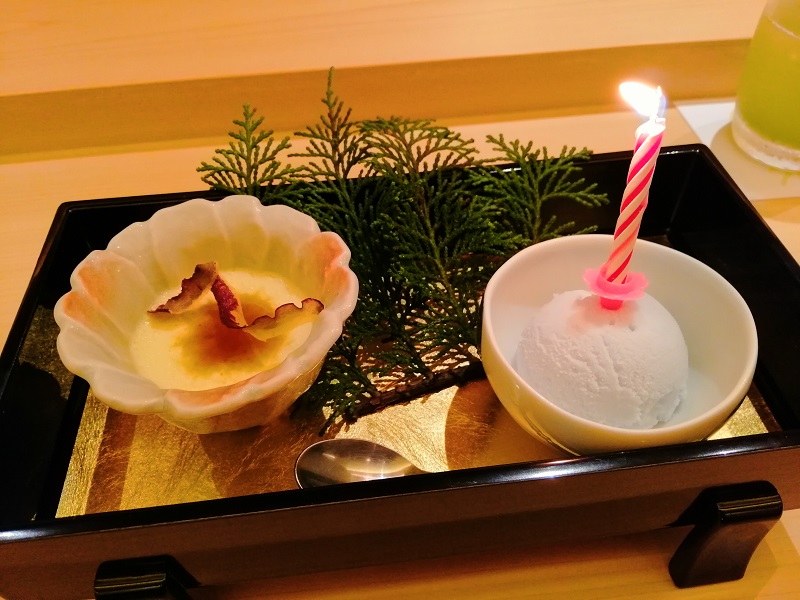 The people seated around me smiled and wished me a happy birthday. I’m not much of a blusher but I can feel the initial warmth of a flush creep up my neck. I was embarrassed they made such a big deal out of it. Embarrassed but happy. And touched! I had to blink to chase away a tear that threatened to escape my eye. The crème brulee and ice cream wasn’t anything special but the gesture certainly meant a lot. I left a very happy man. 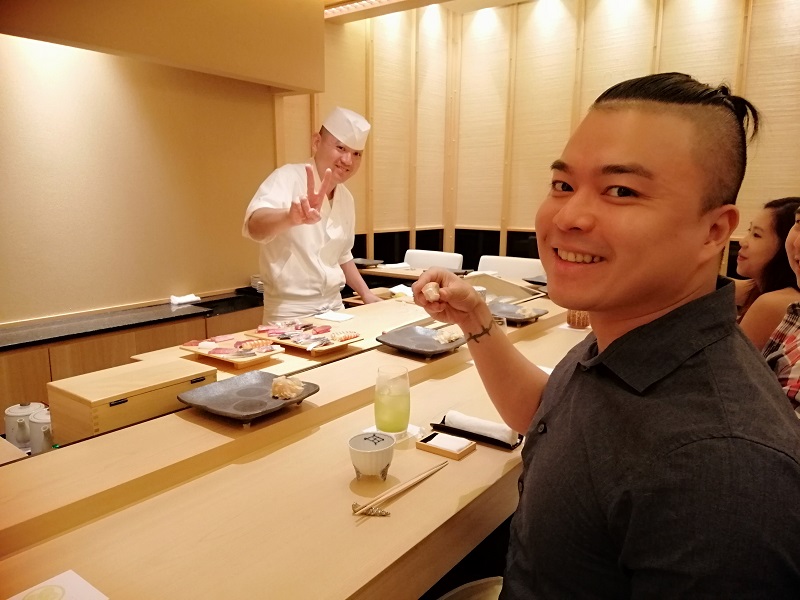 I highly recommend Shinji by Kanesaka but not coz they gave me such a wonderful birthday experience. I thought the sushi was great and the ambiance was wonderful. You won’t find stuffy, forbidding chefs here that glares at you if you don’t eat the sushi promptly. The chefs and waitresses are very friendly and approachable. You can ask them questions about the sushi and they’ll answer you to the best of their limited English. Is it the best sushi I’ve had? No, that honor belongs to 1 Michelin star Izesushi in Otaru, Hokkaido. But is it better than places like Nobu in KL? By leaps and bounds! The SGD 75 Hana set is superb value too. I only paid SGD 88.30 (RM 269) after tax. I’ll be back for sure.