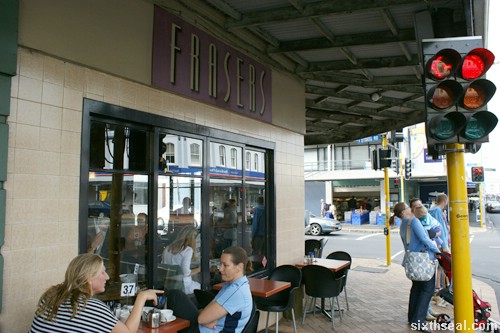 Frasers Cafe is a rustic nook in the corner that’s very popular with the locals in Mt. Eden, Auckland. My sister is a huge fan of their breakfast and just before I was due to fly back to Malaysia, she brought me there to check it out. 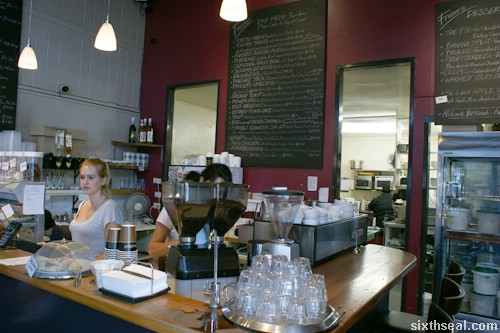 It reminds me a lot of the little al fresco cafes in Melbourne, with pretty similar choices. 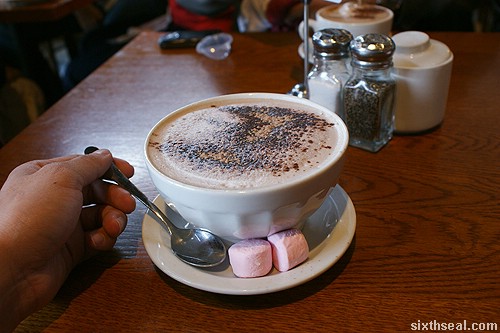 I went for a nice bowl of hot chocolate with marshmallows on the side. I’m just decadent that way, bowls > mugs any day. 😉 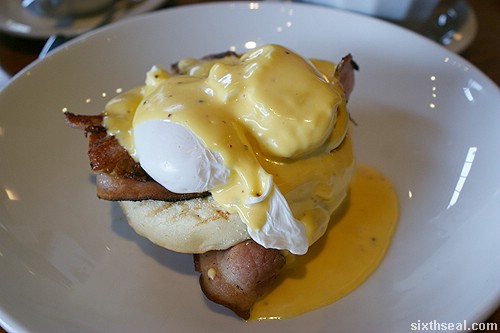 This is my Eggs Benedict with bacon (NZD 17.90). Just look at the poached egg – pregnant with possibilities (well, egg yolks at any rate), the juicy strips of bacon and the generous topping of warm Hollandaise sauce. It tasted marvelous, with the runny yolk and butter permeating every single bite. 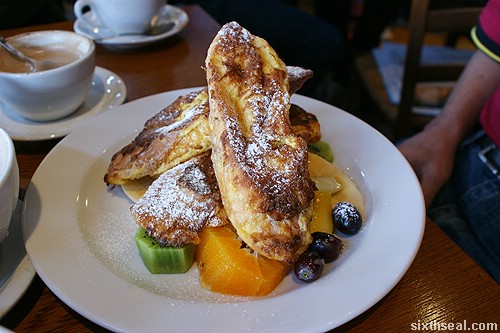 My dad went for the healthier option of French Toast served with fresh fruit and mixed berry maple compote (NZD 17.50). It comes with fresh fruits on the side and a sprinkling of powdered sugar. I thought this was pretty good too. 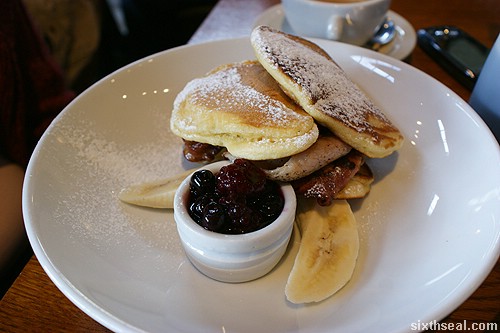 This is the Pancake Stack with banana, crispy bacon, maple syrup and berry compote (NZD 17.90) that my sis had for breakfast. I think the home made blackberry and blueberry compote (Google says this means fruit stewed or cooked in syrup) is the best part about this dish. A dab of that on a piece of warm pancake with a slice of bacon tasted divine. Sweet and savory. 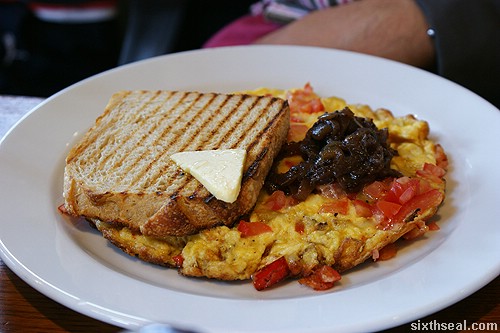 Alvin had the more subdued Frasers Omelette of potato, capsicum, tomato and mozzarella served with onion jam (NZD 16.80). The omelet was good but what made this special is the “onion jam” which tasted sweet. Nice! 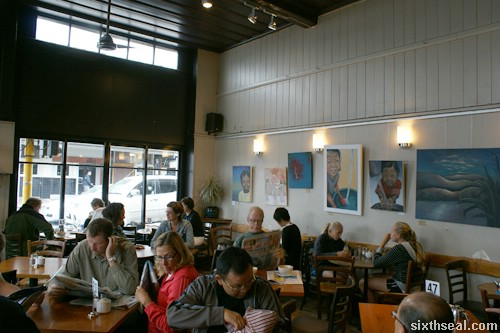 Frasers is a nice place for a huge cooked breakfast. I recommend you sit inside during autumn so your food doesn’t get cold as soon as it’s served. It can be a bit packed, but service is quick and efficient. 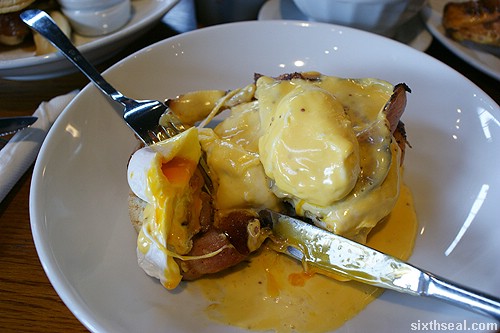 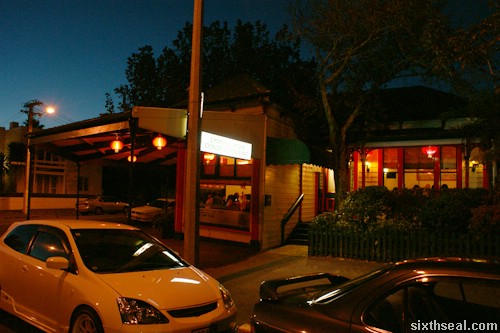 We went for a family dinner before my mom’s operation slated the next day. I wanted to bring her to a nice restaurant but my mom has very Chinese tastes and wanted to go to a Chinese restaurant. 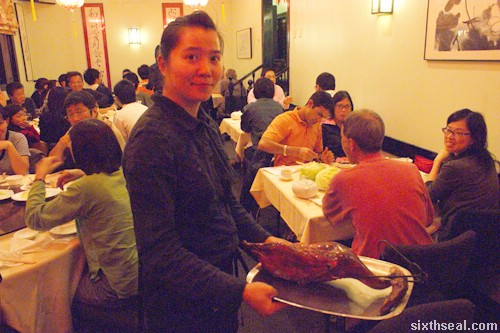 My sister recommended Empress Garden – it’s supposed to be the best Peking Duck place in Auckland (which isn’t saying much, trust me) and the sheer volume of patrons requires a reservation in advance. The place was packed! 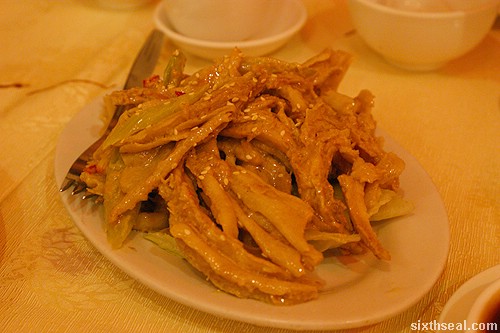 We had an entree of cold boneless duck feet. Tasty, and no pesky bones to get in the way of your enjoyment of animal foot fetish. 😉 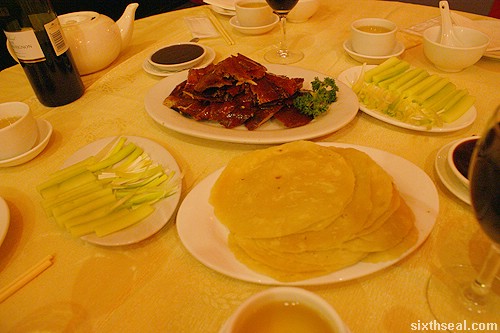 Anyway, about the Peking Duck, which is the headliner for this place, it’s prepared in the usual three-part procedure – the duck skin, the second phase (lots of options here) and the third dish (usually soup). 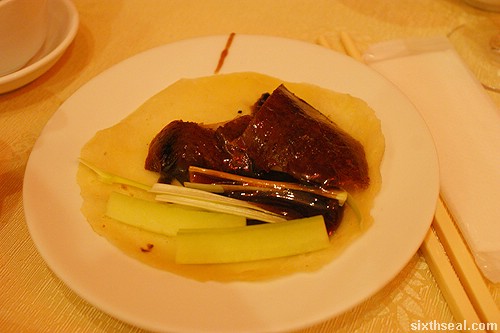 I didn’t find the Peking Duck to be particularly authentic – it doesn’t only come with the skin but also some meat (!!!). How liddat? 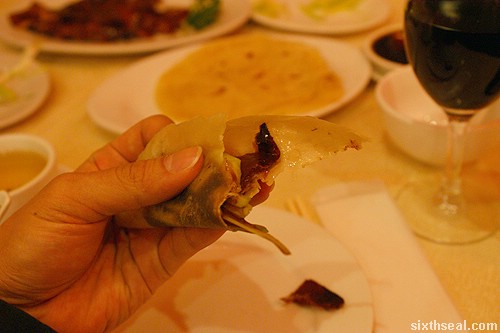 We had the sesame pockets for the second course – you put the minced duck meat cooked with chai bo and stuff it into warm pastries. 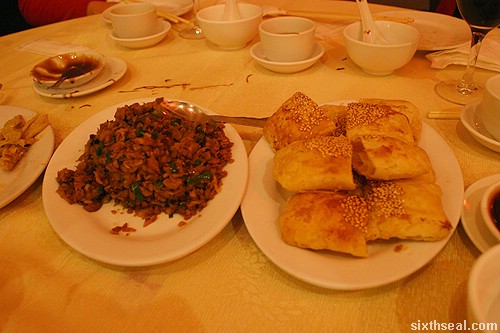 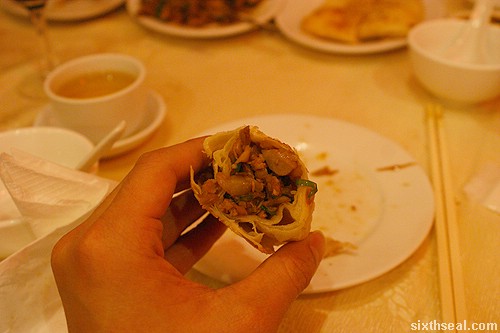 The third course is duck soup with vegetables and tofu. 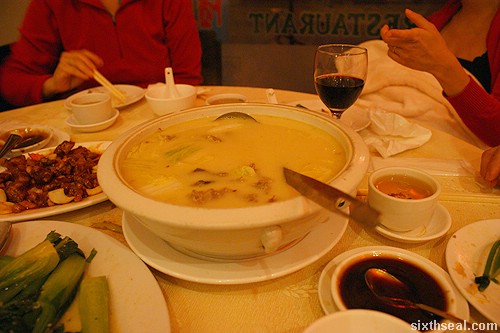 All three duck dishes comes from the Peking duck – utilized to the fullest, the bone is used to cook the soup. 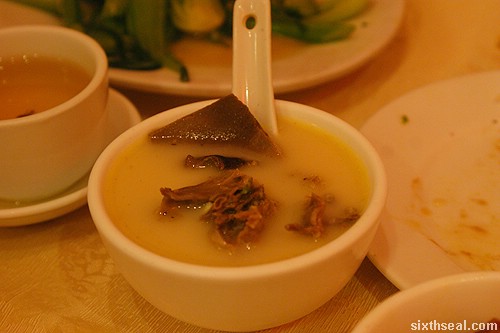 Obligatory dish of veggies – being not a fan of green things (except those you smoke instead of cook). I don’t know what it is, my mom ordered it. 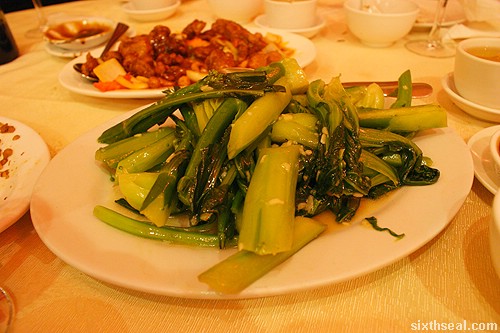 Also, one last dish of Kung Pow pork. I have serious doubts about this. It looks more like sweet and sour pork instead of Kung Pow pork (no dried chillis) but they cook it with chilli oil instead. 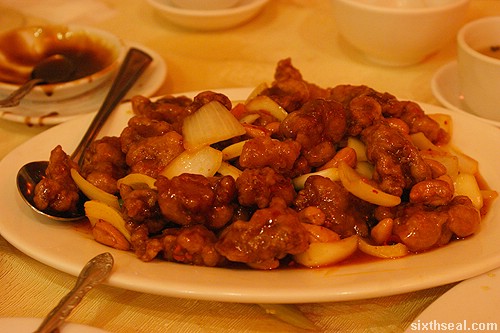 The Peking Duck costs NZD 80 alone. The entire bill came up to about NZD 170 which is RM 387 – pretty cheap considering we couldn’t even finish it. >.< 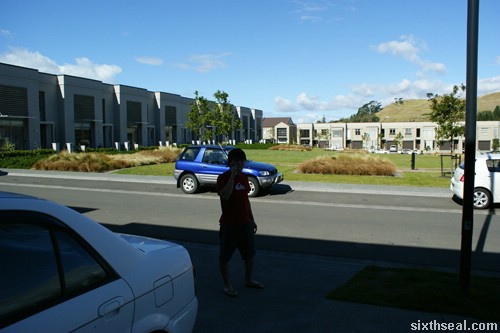 Kia ora from down down under! I’m not in Aussie but in NZ – Auckland to be exact.

It’s not a vacation per se, gotta go to the hospital with me mum tomorrow but look on the bright side!

Que sera sera…whatever will be will be…the future’s not ours to see. 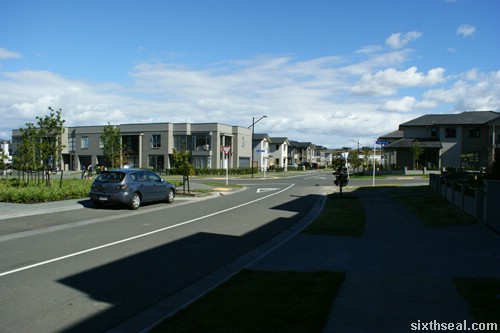 I love you mom.