I was dragged to this place at Jalan Tun HS Lee at the promise of some really good meat one night. Yeah, I know how that came out. Heh. It’s located in a quite secluded area of KL – Ril’s Steakhouse is at one of those 100 year-old buildings in town, complete with a chic art gallery called thewarehouse cafe.art (complete with chic font) at the bottom.

It’s actually one unit and there are a couple of paintings there but only two other groups of diners – a bunch that looks like a lawyer and another that looks like a tourist family from some country which has oil as its prime export (and loads of it).

On to the food, I was told by the waiter (and my dining companion, who has been here previously) that they serve either Australian Angus Steaks or a type of Malaysian-reared breed called Gemas Gold.

They also serve a good platter of warm bread with a variety of spreads that I really liked before your meal. However, there were only one small bun for each diner, and no one going around for refills which I thought was a bit off for a place like this.

I think this is the best part of the meal – the cocktails. It’s like an East-meets-West cocktail with gnarly ingredients thrown in just for the heck of it. It’s like something I would do as my projects! I loved it. The bird’s eye chilli (cili padi) is enough to make your eyes water and clear your sinus right up! They have others in a similar vein too.

This is an amazing appetizer that was recommended by the waiter and it comes highly recommended from me too. It was much better than the steak I had – the breaded asparagus is supposed to be dipped first into the salt you see on the cracked shell at the side and then into the egg. Lovely stuff, and immaculate plating.

This is described as a mouthwatering selection of fresh fish and seafood, cooked with creamy leeks and onions in a dill and mustard white sauce, baked with a buttery, crispy golden mashed potato topping. My dining companion had this for the mains. It was serviceable but I wasn’t too impressed by it. There was nothing in it that stood out.

I went for this 300 gram steak because my dining companion does not eat beef. I thought that was rather ironic, bringing me here, but she knows I love the stuff. I ordered it extra-rare, basically a blue steak and it turned out wonderfully. This place knows how to cook their steaks, that’s for sure – just slightly cooked on the outside, with a wonderful cold center. However, it wasn’t as fresh as I was hoping for.

I should have gone with the local Gemas Gold Rib-Eye 700 gram monster for just RM 10 more and tried to finish that. Heh.

They also have sides ranging from chunky skin-on steak fries (RM 14) to whole roasted garlic heads (RM 10), the latter of which I ordered. I liked it, it was done perfectly. It doesn’t do your breath much good but it tastes wonderful.

I was really unimpressed by the Australian Angus steak that I ordered and steaks are supposed to be the forte of the place. It wasn’t fresh enough to be cooked extra rare. I’ll like to go again just to try the Malaysian-bread Gemas Gold though – it’s local, with lower food miles and bound to be better. It comes in a huge 700 gram rib-eye at just RM 132 and I saw the tourist family eating it.

I’ll need to be especially hungry to tackle it on my own though – but it was beautifully presented and I’ll love to taste this Gemas Gold that I haven’t heard of before.

This is a higher end quick service restaurant that I had dinner at last week in Singapore. Stuart Anderson’s Black Angus Steakhouse has several outlets there – it’s a franchise that started in Seattle.

Black Angus Steakhouse serves All American fare like steaks (obviously), burgers and root beer. The prices are pretty reasonable too, if you don’t convert – the root beer float goes for SGD 7.50. 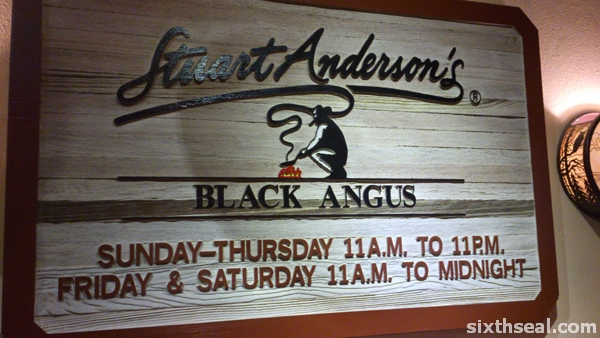 I settled for a center-cut New York Steak – medium rare. It’s SGD 43.90 for 10 oz. I love the sauce options – the waiter recommended Red Wine sauce, which I went with. 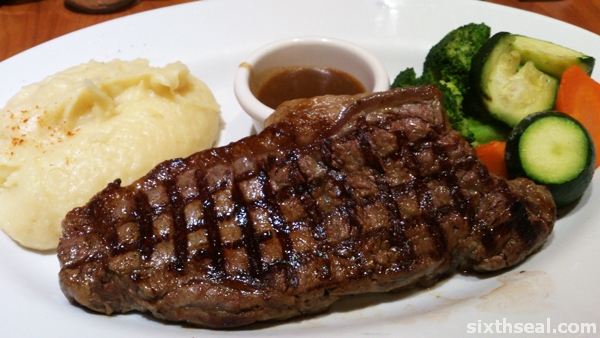 You can also choose the trimmings – I went for the standard side of fresh steamed vegetables and switched my baked potato to garlic mashed potato, which was an excellent choice. My only beef (no pun intended) is that they got my order wrong, it came out medium well instead of medium rare but in a group of about a dozen near closing time, I guess mix-ups are inevitable. 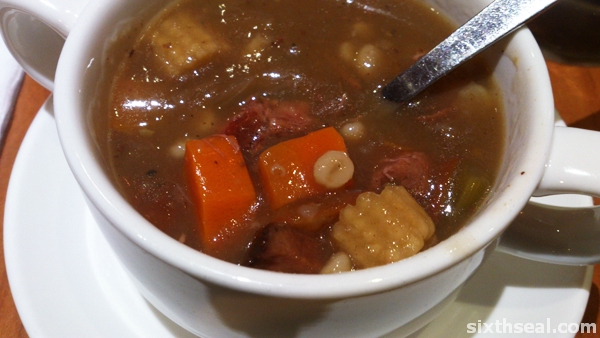 You also get to choose an entree from the menu to go with your steak dinner and I went with Stuart’s Steak Soup which was recommended and I wasn’t disappointed – it turned out to be the best dish I had. Heh. The steak soup has generous chunks of beef inside as well as a hodgepodge of beans, veggies and even barley. Nice, thick soup for the soul. 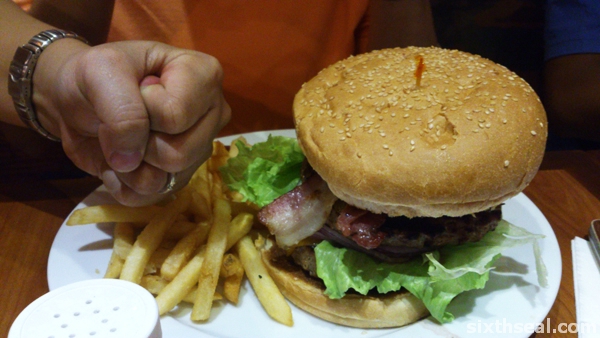 They also have a monster of a burger, with patties made of Black Angus beef weighing a whole pound! That’s like eating 4 quarter pounders and this has strips of bacon on top to boot. Decadent stuff. Just look at the size of it. It’s about SGD 24 or so, and it would certainly take a very hungry man to finish it.