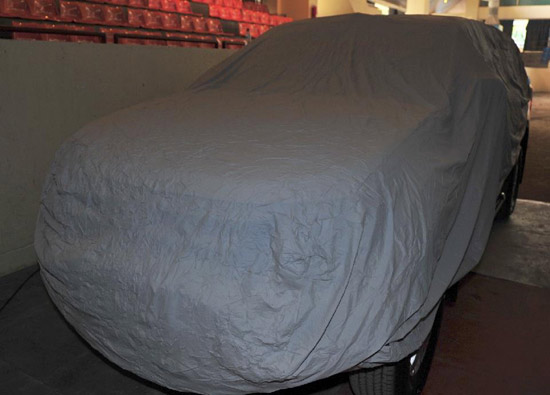 I totally missed this event. It’s the all-new Ford Ranger launch in KL but unfortunately I was overseas at that time. I’m reading the official Ford Ranger Facebook page and it seems that everyone had a blast. 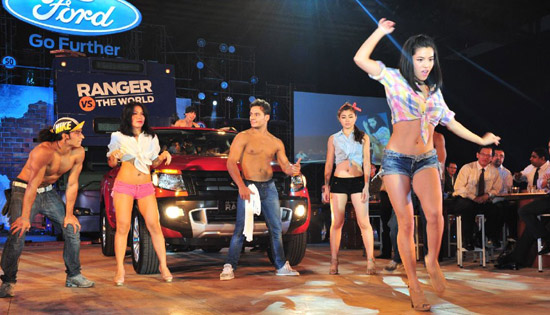 Shake that. There was a lot of beautiful people performing at the launch and the best part was when they towed in a bus with the Ford Ranger. 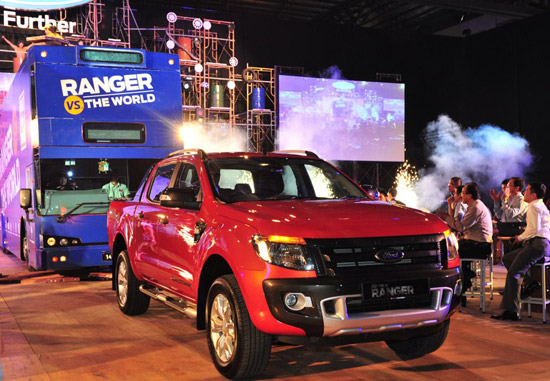 The all-new Ford Ranger is completely re-designed from the bottom up – everything is new, from the engine to the frame and even the interior of this compact pickup. It is powered by a Duratorq TDCi 2.2L Variable Geometry (BG) Turbo diesel engine with six-speed auto or manual transmission producing 150 PS and 375 Nm of torque. The 3.2L version comes with auto transmission and has a power output of 200 PS with a staggering 470 Nm of torque.

However, despite all that barely constrained power under the hood, the fuel consumption is quite exceptional.

This is one pickup that knows the fine art of sipping diesel instead of guzzling it. 🙂

It’s no surprise that Ford Malaysia has already surpassed 800 pre-bookings for this vehicle. 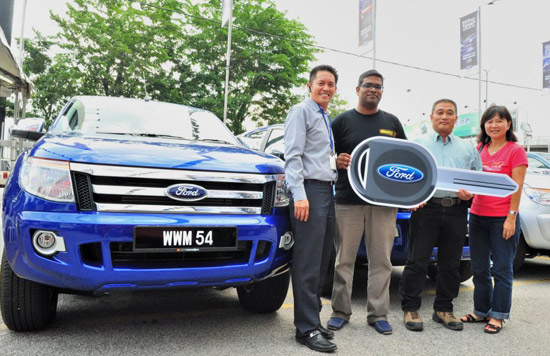 The higher fuel efficiency and exceptional driving experience is not all it has to offer. There are several active and passive safety features besides the usual ABS and EBD – LAC (Load Adaptive Control) optimizes the vehicle stability when carrying heavy loads, EBA provides additional brake pressure in emergency stop situations and the EBL (Emergency Brake Light) will kick in the indicators when the Ford Ranger suddenly decelerates to alert other drivers.

The Wildtrak 3.2L variant ups the ante by having ESP (Electronic Stability Program) built in so there’s advanced sensors that monitors the road (what road? ;)) or unforgiving terrain the pickup is driving down and compares it to the path the driver wants to go from the steering wheel.

It also has Hill Descent Control (HDC) to make steep downhill descents easier, Hill Launch Assist (HLA) to give a boost when you want to go up a steep climb and Roll-Over Mitigation (ROM) which is quite self-explanatory – it helps prevents the vehicle from rolling over. 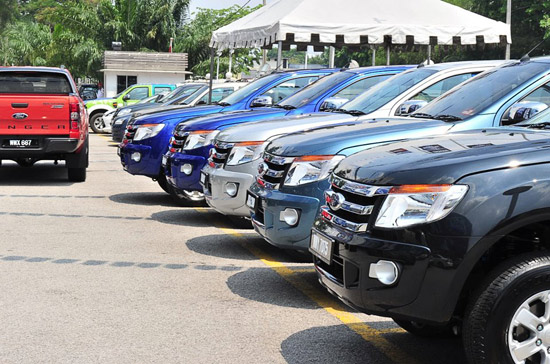 The all-new Ford Ranger is also capable of wading through 800 millimeters of water even when fully loaded! Some variants can even pull a payload of 1,400 kgs which is quite impressive and demonstrated by the bus pulling.

There are three variants that’s available in Malaysia:

(all prices OTR for Peninsular Malaysia and private owners) 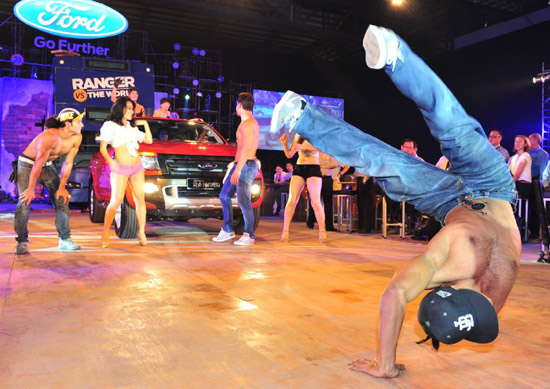 This is one pick-up that you can really drive anywhere. The all-new Ford Ranger has a comfortable interior too, with user-friendly technology like Bluetooth Voice Control! Heck, in a perfect world with no border controls, I can drive this all the way to China, swing back west and trail-blaze through Mongolia, Russia and Europe.

Won’t that be the perfect road trip? 🙂 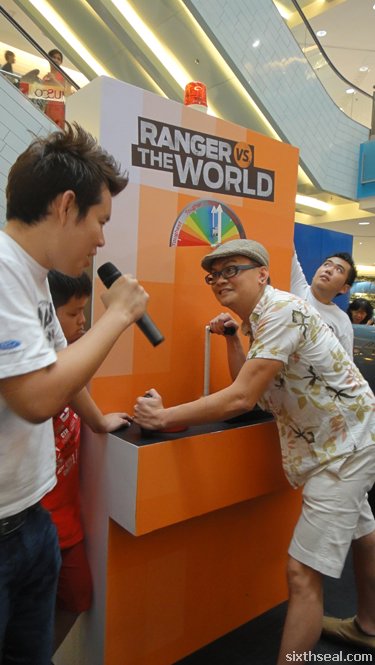 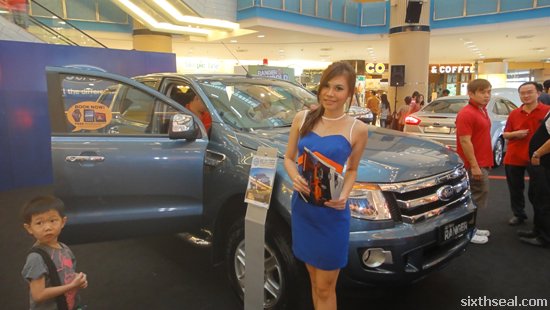 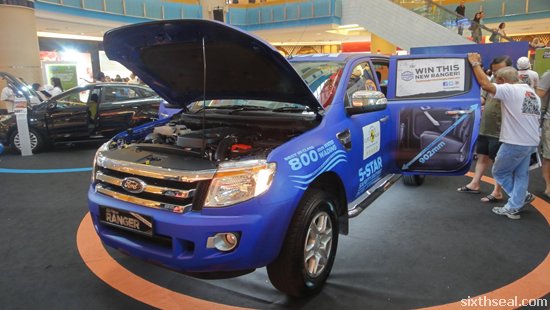 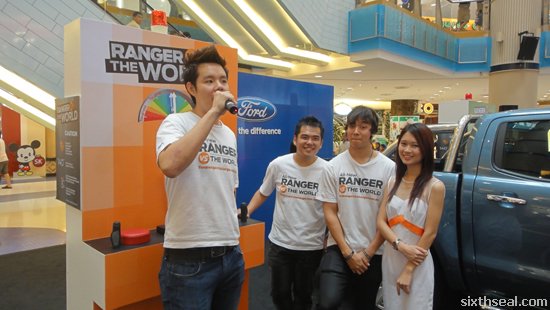 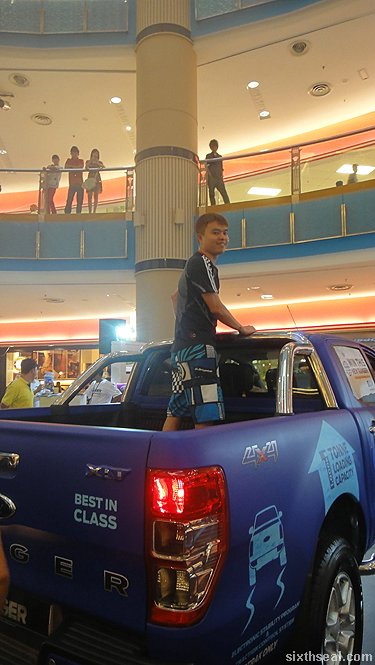 I climb on things. I was passing by the mall one time when I saw this Twitter contest where you follow @fordrangermy and check out their updates to stand a chance to win prizes like a G-Shock. They will be giving away Ford Exclusive Merchandize (laptop backpack, limited edition New Ford Ranger t-shirt, and a heavy duty torchlight – nifty). This contest runs from 9th April.

I shall caption this This is how we ride.

…coz that’s actually how we ride in rural areas of Sarawak. Haha! I remember being transported as a kid and all of us were squeezed in the back of the pickup. Funerals, school events, you name it – that’s how you get lots of people from Point A to Point B in the areas where cars cannot pass.

It’s the reasons why pick-ups like the Ford Ranger is so popular in my home state. There are a lot of poorly maintained roads and sometimes a dirt road with just gravel is the best you get. It gets mighty slippery when it rains too, which is does and often. Cars get stuck in conditions like that.

The last three in particular is useful in flood prone Sarawak. Imagine how many people you can fit at the back with a 1 ton loading capacity. 😉

Get more details about the all new Ford Ranger here. 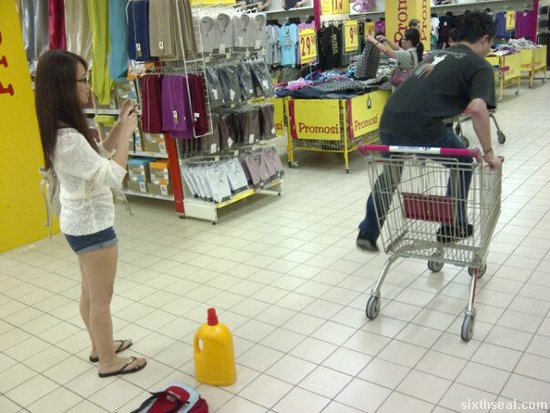 You can get up to all sorts of fun in a supermarket while doing your weekend grocery shopping. Supermarket trolley skating is one of them. It really makes getting around the large hypermarket a lot easier. The only problem is, it’s hard to get locomotion (unless you’re wearing stilts) and the security guards tend to tell you to stop. 😉

…but look at how fun it is! 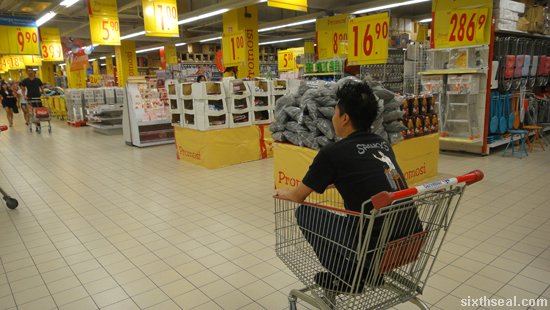 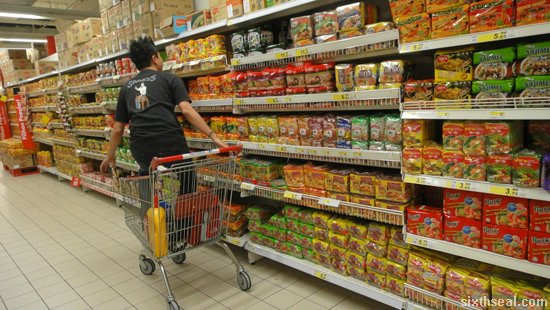 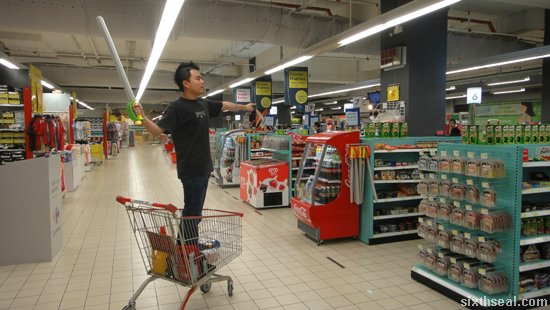 Slowly cruise to the checkout!

It got me thinking about how you can go supermarket trolley surfing without: 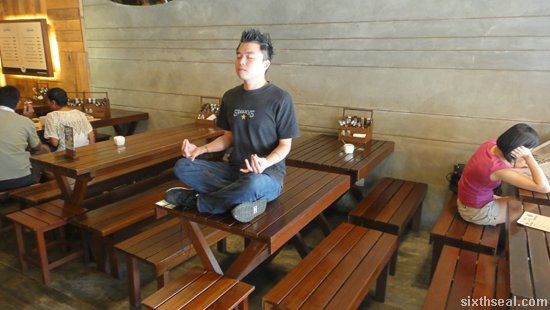 …and after 3 seconds of meditation, I got the answer. 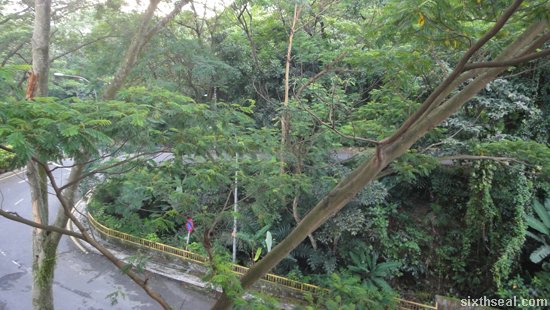 I’ll use a Ford Ranger to tow the shopping cart. This would be done in a private cordoned off road which has curves and steep inclines – you can surf down *and* up fast with the towing capacity of more than 3 tonnes. There you go – all three problems solved! 🙂 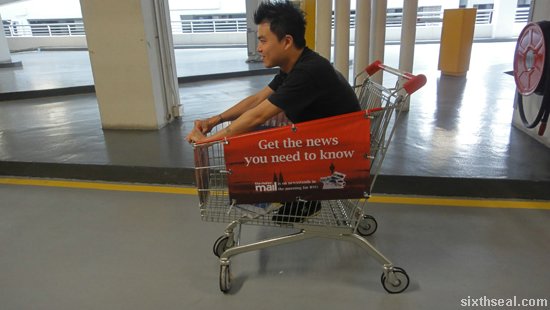 The Malaysia Ranger Challenge is a simple contest where you can write, photograph or film a short entry about how you’ll put the All-New Ford Ranger to the ultimate test. A team of professionals will help you realize the challenge if you’re one of the finalists and you just might be one of the first in Malaysia to own one! 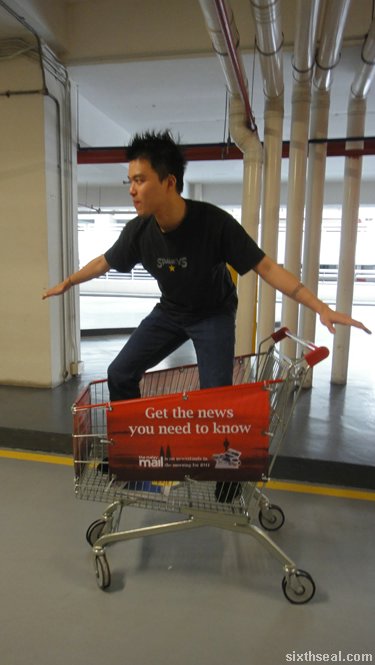 Surf on over to The Malaysia Ranger Challenge to get more details. You can also find them on Twitter and Facebook. BTW, that really was my entry. 😀