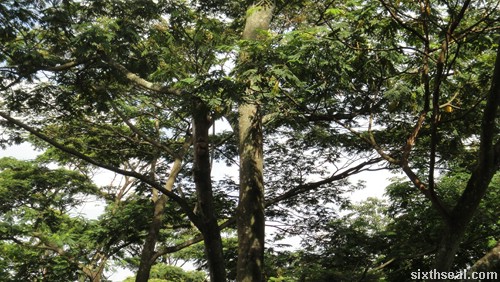 It was a hot and lazy Sunday afternoon – my girlfriend just came over to work in KL the night before and we stayed up late to unpack. By the time we hit the sack it was already dawn. We slept in and the clock blinked 2:00 PM when we woke up. I was famished! 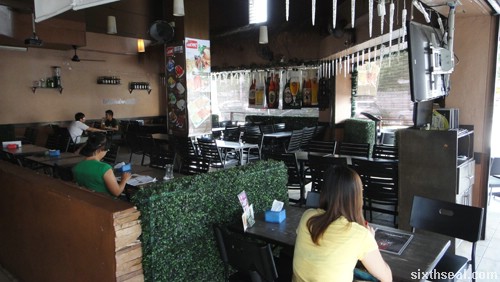 The problem with finding food at 3 pm in the afternoon (after showering and all) is that a lot of places are closed for lunch, and dinner hasn’t started yet. It’s the period of limbo between the two main meals of the day when most places just hunker down to weather out the heat. 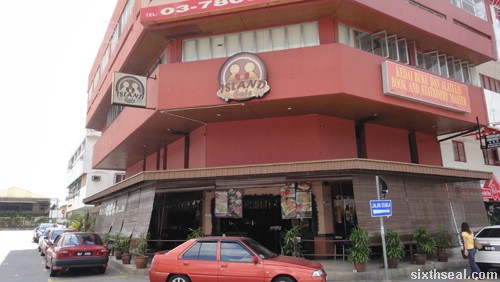 I decided to bring her to Island Cafe in SS2. It’s one of those HK style restaurants which offers everything from lamb chops to fried noodles and peanut butter toast in between. It’s open at odd hours, it’s near to my place and they serve beer. In my books, that makes it a great place. 🙂 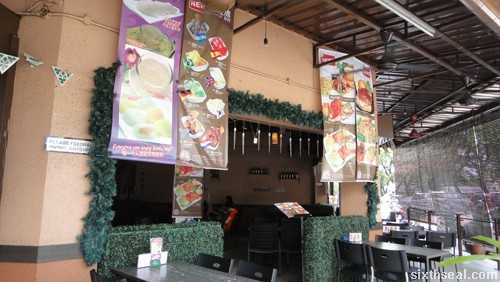 Nothing beats a cold bottle of beer on a hot afternoon to go with your lunch. 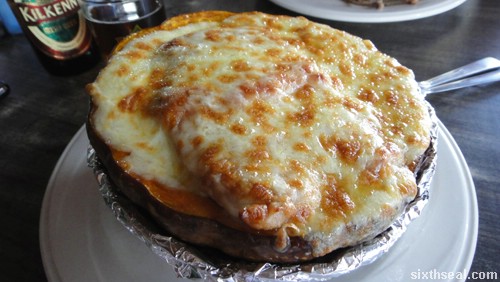 I ordered my usual – Pumpkin Cheese Baked Rice with Pork (RM 16.90). I love this dish coz it’s slightly different from the regular run-of-the-mill cheese baked rice other places offer – it’s baked and served in an actual pumpkin. 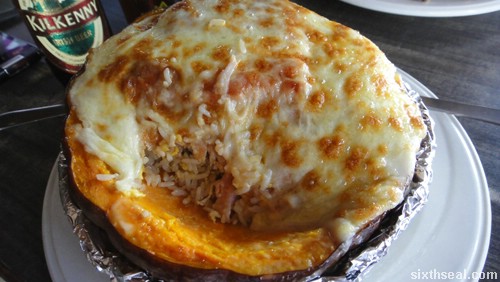 I love pumpkin – it’s an acquired taste, I hear, coz a lot of people don’t like it. It’s sweet and the Pumpkin Cheese Baked Rice is made in such a way that the sweetness of the pumpkin is infused into the rice. It’s topped with two pork chops and melted cheese. You can even eat the pumpkin flesh if you dig into it with a spoon – the “bowl” is a real pumpkin. 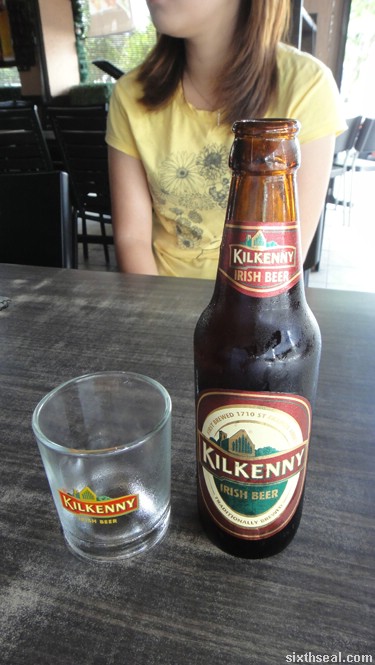 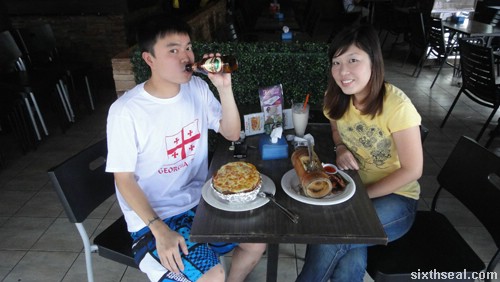 I noticed that Island Cafe has Kilkenny in bottles. I didn’t know they serve Kilkenny over here! I usually drink Kilkenny draft from pubs. I thought it would be nice to get a bottle to go with my lunch, considering the heat. 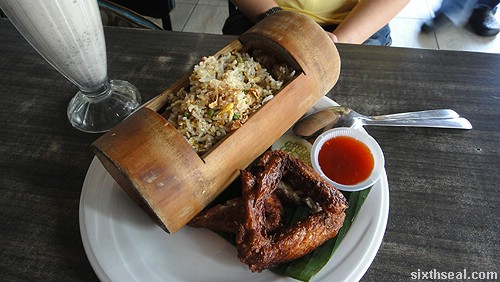 Jeanie had the Bamboo Rice (RM 15.90) which is basically fried rice served in a bamboo container with chicken wings on the side. However, it tastes surprisingly good with Kilkenny. I like experimenting food pairings with beer. It’s more common with wine but the more flavorful beers like Kilkenny goes well with certain dishes too! 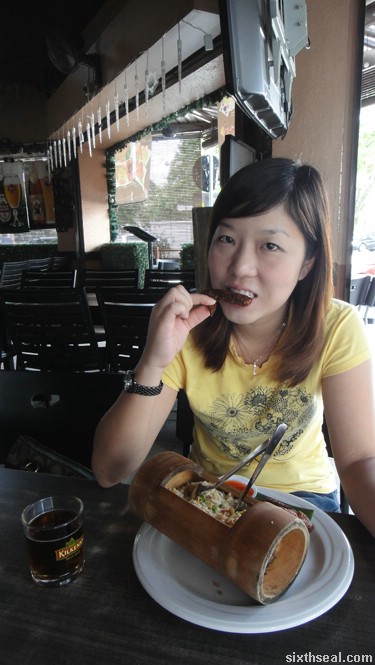 Jeanie also had a glass of the Irish beer with her rice. She thought it was rather unusual but novel to drink Kilkenny outside of a bar. She loves Kilkenny too but like me, her experience is limited to bars. I just found out that it was only recently that Kilkenny produced bottles for sale in certain modern food courts, cafes, restaurants, pubs and bars that does not already serve Kilkenny Draught. 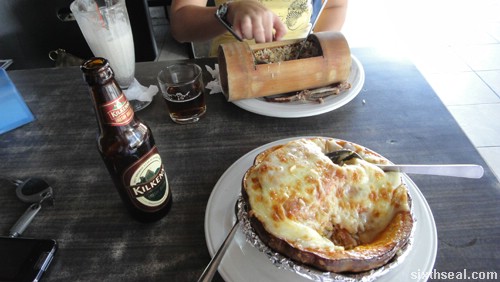 I think it’s great! The taste is pretty similar (although Kilkenny on tap tastes a bit smoother) and it’s nice to have the option of ordering an ale instead of the usual lagers while out eating local food. 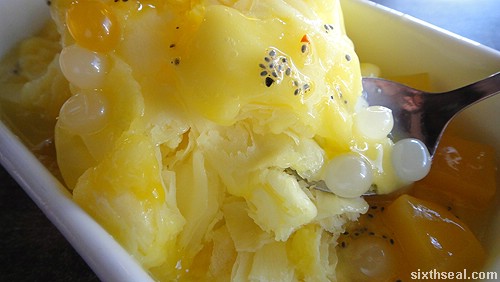 I reckon it beats the hell out of the Mango Snow Ice (RM 8.50+) Jeanie had for dessert. I’ll prefer another bottle of Kilkenny as dessert. 😉 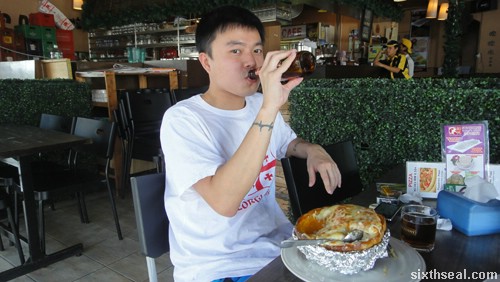 There’s nothing better than an icy cold, sweating bottle of Kilkenny in your hand while eating a long lunch during weekends. It’s good to see it come out of the pubs and into modern food courts, cafes and restaurants so that I can drink it when I crave for local food. 🙂 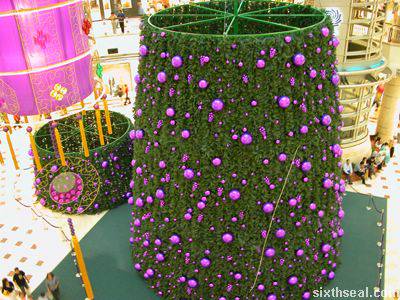 It’s that time of the year again! The time where shopping malls are decked out with Christmas decorations and refrains of Hark the Herald Angels Sing echo through the centralized speakers. My friend Mel dropped by KL this weekend and we decided to have dinner at Finnegan’s. 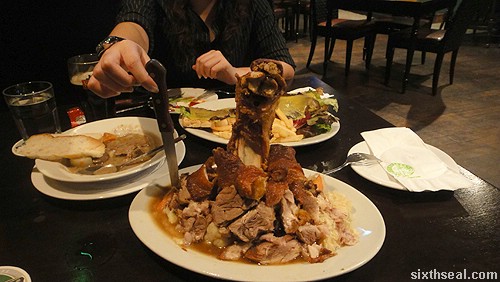 I bumped into Jolene there who sagely commented that I always seem to have a beer in my hand whenever she sees me. Heh! It’s true, I’ve grown quite fond of Kilkenny lately and they have a RM 50 for 3 pints promotion going on in some outlets. 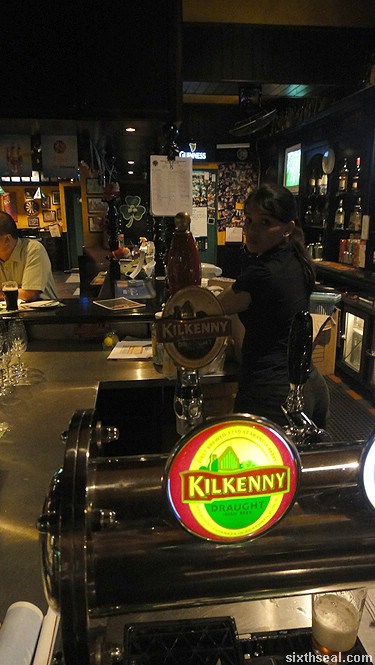 Dubbed the Cream of Irish Beers, Kilkenny has an interesting history – it didn’t originate from a traditional brewery but from the holy cellars (I presume) of St. Francis Abbey in the 14th century. Put simply, it was Franciscan monks who started making this particular beer. 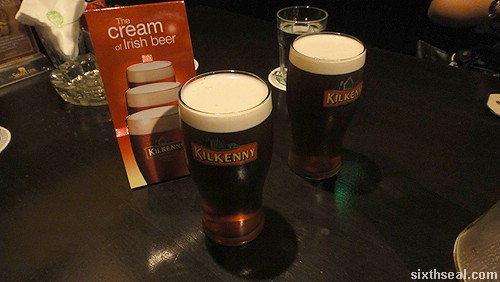 Kilkenny is an Irish cream ale that’s smooth and rich – qualities which I rate highly. I’m a huge fan full bodied beers and stouts. It’s perfect for the festive season, although we don’t get very cold weather over here. 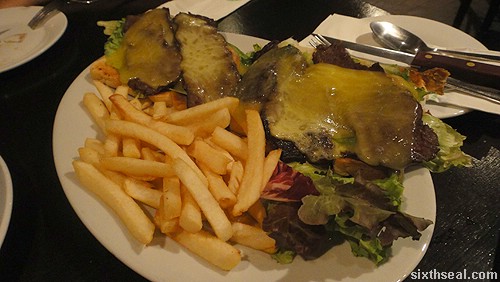 We shared a stew, open sandwiches, and a pork knuckle which nearly killed us (too much food for two people). I guess overeating is also part of the festive ritual. 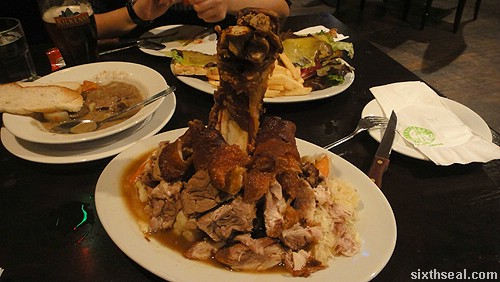 Kilkenny promotions are available at selected outlets throughout the country. I’m going to try my hand at “Cooking with Kilkenny” (has a nice ring to it, eh?) next! I plan to use Kilkenny in a recipe to see how it goes.

Find out more about Kilkenny here. I have a feeling this beer is going to be big in the coming years! You can get it at most Irish pubs (Finnegan’s, Delaney’s, Malone’s) and it’s also available at on tap in WIP, Sid’s, Royal Oak, Bulldog, Laundry and Jarrod and Rawlins. Here’s to more festive seasons with Kilkenny! 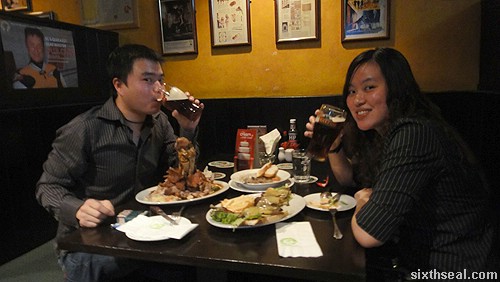