I was on my way back home when I saw this large group of people confronting each other amidst a mass of motorbikes and cars. It was a T junction and I gather they’ve gotten into some kind of fender bender, but a mild one by the looks of it.

It was quite late and there was no traffic except more bikes arriving noisily to fortify the already significant representation while I was at that junction, a veritable congregation of two-wheeled owners.

I went on my way to do some grocery shopping before the supermarket closed – you know, the usual staples of bachelorhood – ramen, more ramen, ramen in a cup, bread, milk, eggs, sausages (erm) and crab sticks.

It took me about 30 minutes (even picked up some toothpaste on sale while I was at it) and my wallet was RM 80 lighter when I was done.

I took the same route back home and surprisingly they were still there. I couldn’t hear what was being said, it looks like Cars vs Bikes – with the latter dominating – there were a lot of gesturing and pointing going on, so I regarded them with mild interest, and drove back home.

Yup, I know, it’s anti-climatic but the answer to the question is… 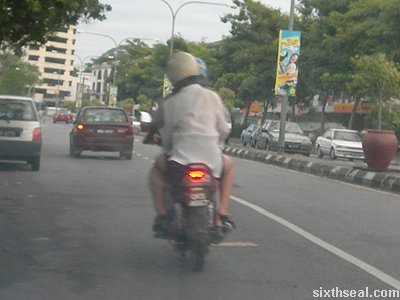