I sent my car to the workshop over the weekend coz it was behaving rather strangely – it kept making quick and sudden swerves to the right on it’s own (!!!). Either the car was possessed by a vengeful and malicious spirit intent on causing me grievous bodily harm or there was something very wrong with the car.

Being a relatively pragmatic person, I thought the latter was more likely.

My initial suspicion was that my right front tyre is running flat and so I leaned out for a quick peek during a traffic light stop (and nearly got my head taken off by a speeding bike). It looked nice and inflated.

Puzzled, I drove on, hoping that the problem would resolve itself when the next uninitiated swerve took me by surprise and I went *entirely* into next lane. I could see the steering wheel move. After my heart resumed beating again I decided to ground the car and send it off to get checked.

I knew what happened too – a long time ago, when I was a functioning alcoholic, I decided to impulsively drift through a wet corner on my way home. It’s just one of the things you do when you’re shit faced drunk and it seemed like a good idea at the time. I ended up in the storm drain, with the rear of the car stuck inside the crevice. I gave permission to the tow truck to attach itself to the drive shaft (or suspension, I can’t remember) so I could get home quicker and without a trip to the workshop.

It turned out that the drive shafts were worn and the suspension was pretty much gone in the following 8 years, so the repairs on that alone cost me RM 3,043. I also fixed my long-running problems with the car air conditioning, which set me back a further RM 1,280 for a total of RM 4,323.

I know, I’m still recovering from the price too. I guess I’ll have to eat bread for the time being while I save up to go to Japan next year. I’m glad I was alone when the problem manifested though, and I managed to fix it, coz that was very dangerous indeed and I have people I love and commitments in my life now.

I was driving out last night from my place when I had to swerve to avoid a head-on collision with a car coming up at full speed from the exit ramp.

* It should be noted that the 90 degree corner separating me from the other car at that ramp is a blind spot – I cannot see him and there’s a difference in elevation so I can’t even see his headlights splash for advance warning.

The person inside kinda smiled apologetically at me and then drove off. I couldn’t stop him since my car was still stuck and after extracting myself I went to lodge a police report.

The police told me that they can’t accept a report unless I have the other person’s car licence plate. I didn’t.

Thus, I went back and went to the security monitors to review the incident. A large problem is that all of the DVRs were all out of sync chronologically and I had to make calculations to see what happened when.

The security was of minimal help. I had to do all of this myself, replaying the CCTVs (used to work in the securities line) for over 4 hours!

There were two cars entering the car park when I was getting into my car so those two are the obvious suspects. One of them did actually take that dangerous short cut that nearly resulted in me colliding head-on.

However, both of the cars were black and not white. I encountered a white car, and it seems like the person driving it looked rather familiar but there is no tenant with a white car coming in at the time.

There was also the issue of headlights visible at the far end of the ramp before that, which could possibly be the result of an existing car (e.g. one inside the car park) at the area before Level 2 waiting and then coming up the wrong way.

The incident happened at 8:06 pm last night and I spent 4 hours scouring the CCTV footage and the car park for the car to no avail.

I had to swerve hard to avoid colliding with that car and in that process, hit the wall on the other side of the ramp. I have a feeling the front compressed into the radiator. I only got back after 12 am and talked in the porridge forum for a while before sleeping.

I can’t report this as it is but I’ve spoken to a lawyer and has been advised to keep all my video recordings and evidence for a possible future litigation which has nothing to do with traffic incidents (24 hours).

I can’t really talk about the circumstances (you know how it is, in law, it’s always about the other side making a mistake first) but anyway I’ll head out to get a quote from the workshop I used to work with to see how much the car is going to cost me.

Damn, and I’ve been real careful since fixing my car too. 😡

I was on my way back home when I saw this large group of people confronting each other amidst a mass of motorbikes and cars. It was a T junction and I gather they’ve gotten into some kind of fender bender, but a mild one by the looks of it.

It was quite late and there was no traffic except more bikes arriving noisily to fortify the already significant representation while I was at that junction, a veritable congregation of two-wheeled owners.

I went on my way to do some grocery shopping before the supermarket closed – you know, the usual staples of bachelorhood – ramen, more ramen, ramen in a cup, bread, milk, eggs, sausages (erm) and crab sticks.

It took me about 30 minutes (even picked up some toothpaste on sale while I was at it) and my wallet was RM 80 lighter when I was done.

I took the same route back home and surprisingly they were still there. I couldn’t hear what was being said, it looks like Cars vs Bikes – with the latter dominating – there were a lot of gesturing and pointing going on, so I regarded them with mild interest, and drove back home.

Yup, I know, it’s anti-climatic but the answer to the question is…

This guy rear ended me while I was driving along LDP just now. Anyway, if you use that highway you’ll know that it’s almost always perpetually congested. I was moving at a leisurely 20-30 km/h with the start and stop traffic when I suddenly felt an impact from behind.

I got out of the car and noticed he was still inside, looking a bit lost and shocked. I just said “Dude, what’s wrong with you?” and he got out and apologized.

He said a car cut into his lane so he was forced to cut into mine and couldn’t stop in time before he hit me.

There was a looooooong line of cars behind us but surprisingly no one honked so we moved to the side. I wanted to lodge a police report to claim insurance but he wasn’t very keen on the idea and wanted to settle it privately.

I was also in a rush and the damage to my car wasn’t that bad – he hit the inside of the bumper and probably damaged the rear proximity sensors. His car was much worse off. I asked him how he wanted to do it coz he mentioned he didn’t have a lot of cash on him and he offered RM 200.

He seems like a nice enough guy, and I’m due to fix my bumper and all that anyway, so I agreed and we left it at that. These things happen anyway and it’s basically a minor fender bender. 🙂

We were driving up north to Penang this morning when we came across a rather epic accident involving a trailer (complete with its load), truck and a rather unfortunate and outmatched car. It jammed up the PLUS highway and upon closer inspection, the car’s driver side compartment was completely decimated.

You can’t see it clearly coz I didn’t have time to pull out my digicam so all photos are taken using the iPad. There was a policeman taking photos of the wreck in the car too – I don’t believe for a second that anyone could have survived that.

The driver side of the car was nearly sheered off and when it came to its final resting place in a ditch, it was facing against the traffic.

Anyway, this just goes to show that you can never be too careful on the road. Drive safe and watch out for swerving trailers. We almost got acquainted with one carrying a cargo of timber logs just now. -_- 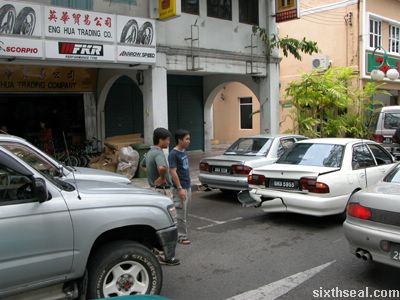 There was a vehicular collision involving a Toyota Hilux rear ending
a Proton Wira just a little down from where I work right before lunch
break. I didn’t hear the accident but Evelyn from Accounts informed me
that there was a loud collision and showed me where it happened. I
tried to look out of the second floor window, but couldn’t see anything
– apparently the vehicles have moved to the side to allow traffic to
flow along the busy and narrow Jalan Padungan road.

Anyway, after ascertaining from her that it seems to be a rather
gnarly accident, I was disappointed when I went down, digital camera in
hand, to see there was only a damaged bumper and boot to the white
Wira, and hardly any signs of damage on the front of the Hilux.
Nevertheless, it seems that people like to buy 4D (lottery prediction
numbers) based on the victim’s car number plate, and I decided to go
during lunch break to this 4D outlet near my workplace to get one just
in the spirit of fun. 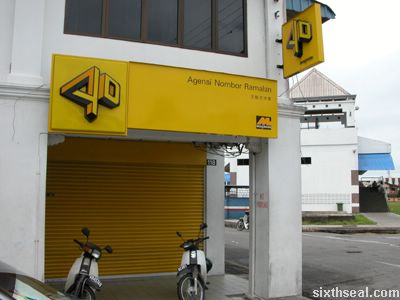 I must say that I can’t remember the last time I bought 4D since
gambling is not one of my interests, so I was surprised to see that the
outlet was closed. Another coworker who saw me photographing the closed
outlet told me that all prediction number agencies are closed on
Thursday. I guess I’ll have to get it tomorrow then. 😉