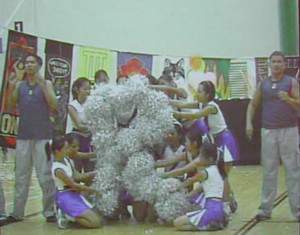 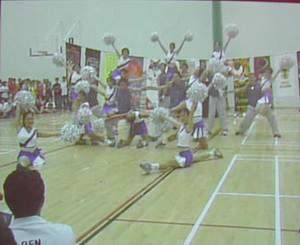 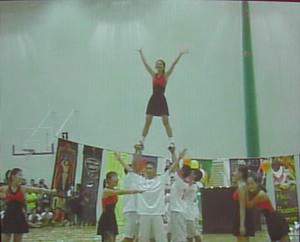 I’ve just watched this NTU (Nanyang Technological University,
Singapore) Halls of Residence cheerleading video from last year that
Daniel kindly FTPed to me. The pictures are pretty blur because I had
to photograph the monitor. I can’t seem to grab screenshots of MPEGs in
Windows XP. It’s some kind of interhalls competition and I was
surprised that some of the routines are really good. There was one that
particularly stood out, I can’t remember which stairway it was but they
had the Moulin Rouge Can Can snippet which lead into Offspring’s
Original Prankster. I liked the intro where they lifted this girl high
up and she waves and did the arms-folded-trust-drop that cheerleaders
do. It’s a really good video, if you’re inside the Monash network I’ve
got it shared under killuminati in Direct Connect (Hub: davo).
Otherwise, bug Daniel [mailto:] to send a copy to you. 🙂

Anyway, as I was walking to the dining hall today, I passed by a
possum rummaging around in a rubbish bin. I didn’t see the little guy
until I was right beside him and in a caffeine induced jitter, I jumped
a little. Well, I think I scared the possum more than he did me,
because he jumped even higher and scrambled over several rubbish bins
and flinged himself into a wall! Ouch.

Link of the Day: A Frightened Boy [rathergood.com]

I’ll have two of whatever he’s having. Oh, and if anyone knows the
title of the song used in the flash animation, give me a holler. Thanks!