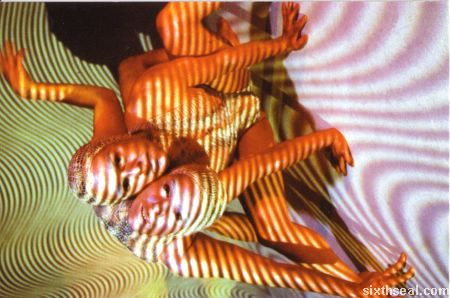 I guessed right! 🙂 I was hoping for this trippy postcard when I saw the stack of 13 postcards on fel’s site
[frens.ws]. Heh! I just got it today. Well, technically it was
yesterday, but it was past midnight on Friday when I arrived home and
saw the postcard. 🙂 Thanks for the postcard Fel! I appreciate that you
took out the time to choose this one. Work is good, but tiring as
usual, going to have to go into the office tomorrow.

I like the image on the postcard – it’s vaguely suggestive and all
those lines make the postcard really intense to look at. The swirls and
curves blends together and creates this surreal feeling. I have to say
that this is my 3rd day without sleep though, so sleep deprivation
visual disturbances might have contributed to the strange effect.
Bizzare. 🙂 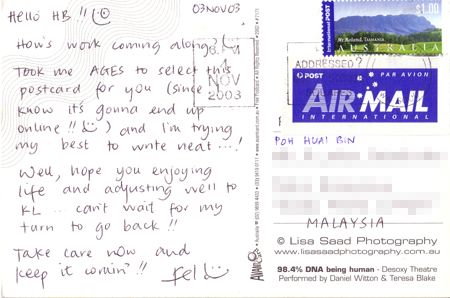 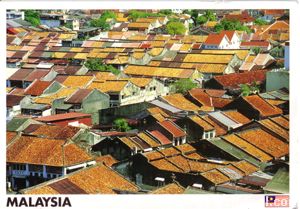 Scanned image of the postcard – front.

I just got another postcard from graceshu
[pixelphobia.net] today. 🙂 This was sent from Penang. She’s actually
back but post tends to have a greater latency than people travelling.
Anyway, I just got back from work – last one to leave, it’s quite
creepy actually to turn off all the lights. Heh. Anyway, I’ll post
again later and reply all the comments. I won’t be sleeping tonight coz
I have to go early tomorrow to sort out this last bit of ASP code. I
have to go to work on Saturday too. Oh well… 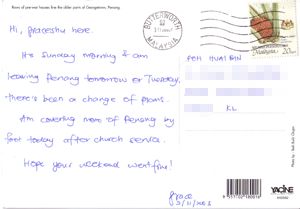 Scanned image of the postcard – back. 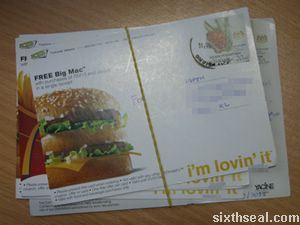 I got a stack of postcards from Grace
[pixelphobia.net] today. 🙂 It was all bundled up when I got home and
consisted of a total of 5 postcards rubber banded together. The first
four are McDonald’s postcards, each one having a single letter – FOR,
WHAT, ITS, WORTH. They actually double as a coupon for a free something
with a purchase. The back of the postcards actually fit side by side to
make a large banner with “i’m lovin’ it”! 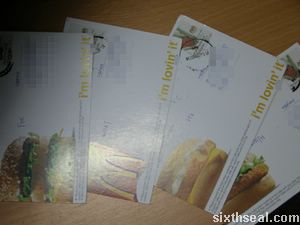 Don’t worry about it if this all sounds puzzling. “McDonald’s
vouchers” and “i’m lovin’ it” is an insider thing between us. Something
like our private joke, except only the first one is funny and the
second one isn’t. :p Anyway, the 5th postcard is mailed from Cameron
Highlands during her camp: 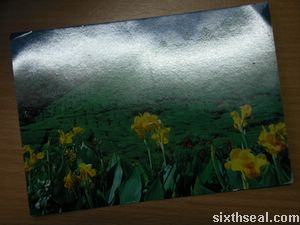 Hi,
Camerons was freaking cold
as it rained all day & night.
Had some freezing & sleepless
nights during the camp. Other
than that, all was fine. They
had pretty good strawberry farms & shortcakes
there too! As usual, ate a lot.
Will write again when am in Ipoh!
Take care! 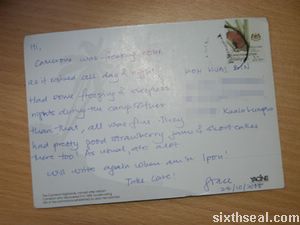 Thanks Grace! 🙂 She’s the greatest, taking time out to mail postcards.

On another note, I have been notified by The People From Above
(otherwise known as TPFA) that updating my weblog during work hours is
unacceptable, even during lunch hour, and while I’m known for being
subversive, I shall accede to this. I can understand how management can
interprete this as a loss of productivity so I will not be updating the
site, replying the comments or even visiting my own blog(s) during
office hours.

However, I will update daily as usual, when I get back from work.
The first person who accuses me of giving in to The Man gets a hefty
kick to the balls (or to the general region for females). 😉