I was a victim of cyberbullying.

I’ll share the details of how it started, how I realized what was happening was getting serious, and how I managed to resolve the issue and start criminal/legal proceedings against the perpetrator.

Cyberbullying can come in many forms on the Internet. It doesn’t just include direct attacks but other forms of harassing behaviour. I wasn’t equipped with enough information about my rights until I did a bit of research, which I’ll like to share with all of you. I’m sure every blogger or social media personality must have run into these things.

However, I’m not talking about the common trolls or haters, but people who have stepped further than that – committed identity fraud, impersonation and libel.

There’s a huge difference between freedom of speech and libel. You can hate all you want but when you step over the line by using other people’s identities and writing libel, you have committed a crime. The Malaysian government does not look kindly upon people committing cybercrime and they’ve taken a lot of steps to prevent that.

In my case, there was a single person (mostly) with a core group of 2-3 supporters, coordinating a libellous personal attack using other people’s identities to comment on my blog and on other blogs to defame me and others.

I can’t talk much about this since there is a police investigation and at the same time, I also plan to report this to MCMC so I’ll just write about the basics.

I first thought it was a common troll, but I realized that this person has gone on other forums and blogs impersonating me (using my name and blog) to make false and provocative statements. I only realized that when I got a bunch of emails asking me about “insider information” for a property.

The person intentionally put my email on a forum and created an account using my name to spread false and libellous statements. I had never even HEARD of the forum, much less commented there.

I got in touch with the forum administrators to get the IP address and other details of the cyberbully.

It was at that time that he started commenting on my blog (usually posting libellous and false statements) first using obviously fake names, and then when I banned him, started using other blogger’s names and email addresses.

He also went to other blogs using *my name* to comment and I realized that after some bloggers got in touch with me to ask about some unusual feedback I was leaving.

The first mistake this person made was that he seemed to have access to email addresses and names of a certain demographic of bloggers, suggesting he is more than a casual reader – he’s either a blogger or someone in the media/advertising industry, or he wouldn’t have access to such a laundry list of personal email addresses so that’s the first break I got while making the police report of a list of suspects.

This second mistake this person made was believing Tor would completely mask his identity. I’m just using the male pronoun for ease of writing, as I said this is going to be a legal case so I can’t put specifics.

The third and most vital mistake he made was that he usually copied and pasted a series of stock comments he had written (probably in a text file) and spammed them in quick succession at very specific and certain times during the day, the first batch of which is earlier than when most people wake up which helped a lot in the investigation.

It probably says a lot more about him that he’s obsessed enough to want to do this several times a day, which takes up his time but not mine (due to my spam filter) and to go further and spam comments on other blogs too. This, the authorities say, is very indicative of a CLOSE and PERSONAL relationship – someone I probably know in real life, gone slightly unhinged due to competition or work related stress/demands.

That was the nail in the coffin, since it narrows the suspects down to less than 5 people, which can be easily monitored for Internet usage and access patterns.

Cyberbullying doesn’t seem to fun when it’s not anonymous anymore eh? Be smart, don’t think that the Internet is the wild west, coz it’s not. The normal rules and laws apply if all the charges are upheld, the perpetrators will have to go to prison and have a civil lawsuit for damages waiting for them when they come out.

…and it’s not just from me, but from all the people they have impersonated so not only is their freedom affected, their future earnings and current assets will be to. Be smart, and know the difference between freedom of speech and libel, fraud, defamation and threats to property and life.

You are responsible for what you do so make sure to be a responsible online citizen. Contribute to the positive Internet experience, the law is very clear about this, as the Communications and Multimedia Act 1998 (Act 588 Section 233 (1) (b)) states:

(Anyone who) initiates a communication using any applications service, whether continuously, repeatedly or otherwise, during which communication may or may not ensue, with or without disclosing his identity and with intent to annoy, abuse, threaten or harass any person at any number or electronic address, commits an offence.

The Internet is a wonderful place but some people just seem to think that anonymity can provide them with a license to do whatever they wish without consequences but truth to be told, there’s no real anonymity online. Everyone can be tracked with the digital trail you leave behind.

Cyberbullying is a very serious issue as the suicide of Tyler Clementi, Megan Meier and many others have shown. Don’t be disheartened or feel down if you’re a victim of cyberbullying – that’s just what the bully wants and it can have a very strong impact on you emotionally. I was lucky in that I was mature enough to shrug off the daily barrage of comments (over 13 years of blogging can do that to you)…

…but more importantly, I knew what my legal rights were and how I could get justice. They say revenge is a dish best served cold. I’m not big on revenge but I believe in personal responsibility so I’m going ahead with the criminal and legal proceedings. I know it’s not easy, especially for younger people, but if you’re a victim, please remember that you’re not alone – find out more about cyberbullying and how to get the help you need at the Klik Dengan Bijak initiative by MCMC. 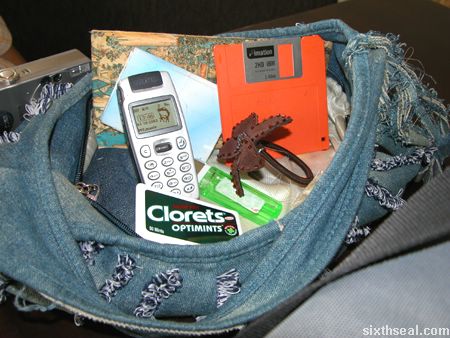 There seems to be spam bots crawling indexed pages and leaving
comments with heavy keyword density and offsite links in an attempt to
drive PageRank and SERPs to their spam site. I’ve seen several these
few days in sixthseal.com, which is running MT 2.63. castitas.com is
running MT 2.64 and doesn’t seem to have that problem. However,
castitas.com isn’t ranked by Google yet, though it is indexed, as can
be seen by the high SERPs with certain keywords related to drugs. I’m
not sure if upgrading to Movable Type 2.64 would foil the spambots but
in the mean time, I’m manually deleting the spam (and the URL, leaving
just the email intact) so there’s no PR leak. 😉 I even came up with a
haiku to insert in all deleted spams:

Spam is bad mmmkay?
Your kind is not welcome here.
Go back home spambot.

Inspired by the various racist comments directed towards ethnic minorities in Caucasian countries. 😉