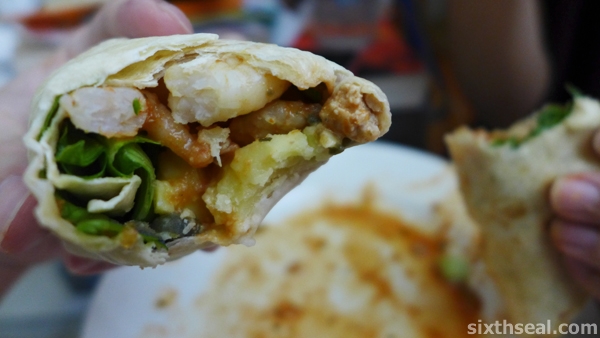 I’ll call it Surf and Turf Burritos except it doesn’t exactly qualify as such. Heh. I made this for our anniversary – it’s a bit of an eccentric mix between East and West, and it sounds like fusion gone completely wrong but for some reason it works! 🙂 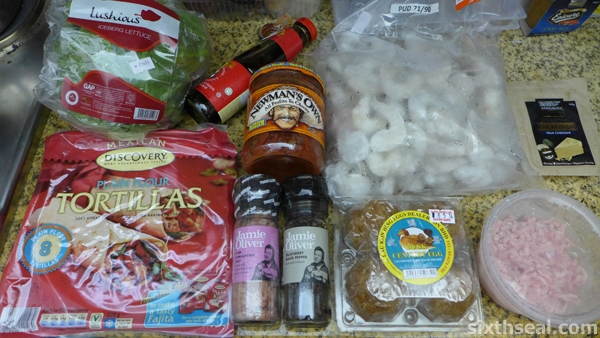 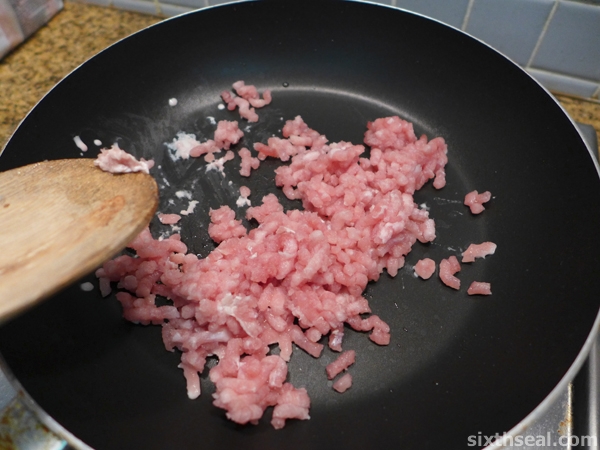 We got the Jamie Oliver Pink Himalayan Salt and Tellicherry Black Pepper on sale. It was something like RM 7.99 each from Meatworks, which makes it a pretty good deal. I used it to season the pork and prawns. 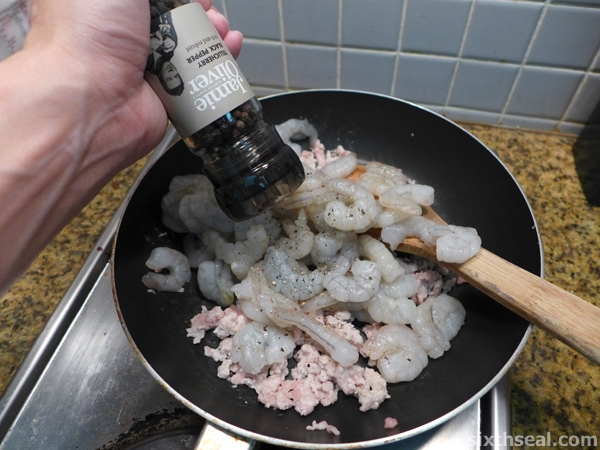 I actually wanted to make crispy tacos for our anniversary but went with fajitas (burritos to be more concise, it doesn’t have grilled meat and it’s wrapped) instead – our brand of choice is Mexican Discovery Plain Flour Tortillas. 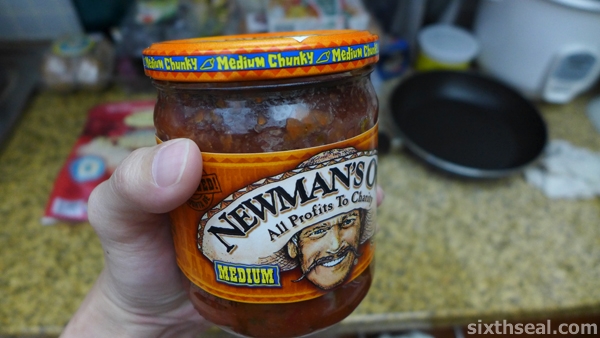 I first pan fried the minced pork with a bit of olive oil and added ½ of a 1.5 kg bag of defrosted peeled prawns into the mix before adding in the salt and pepper. 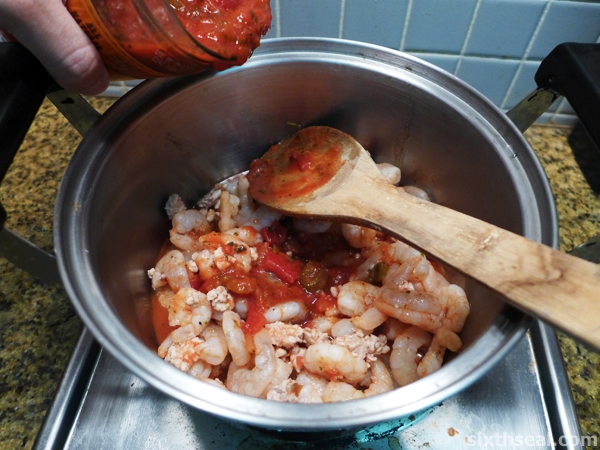 The salsa was added into the mix at this point instead of during the wrapping process. I figured the prawns and pork could do with a bit of taste. I simmered the concoction on low heat until it reduced to just a bit of sauce. 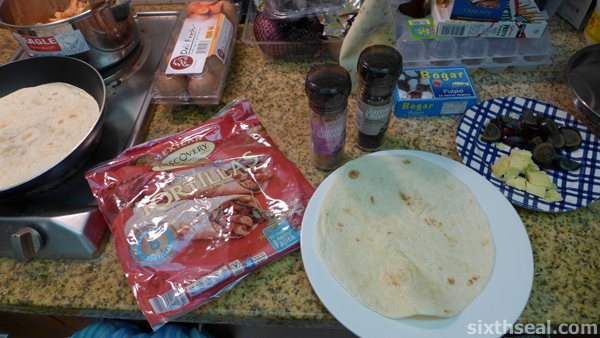 Next, I diced duck century eggs (there are chicken and quail versions nowadays too but I like tradition) and cheddar cheese into bite-sized chunks… 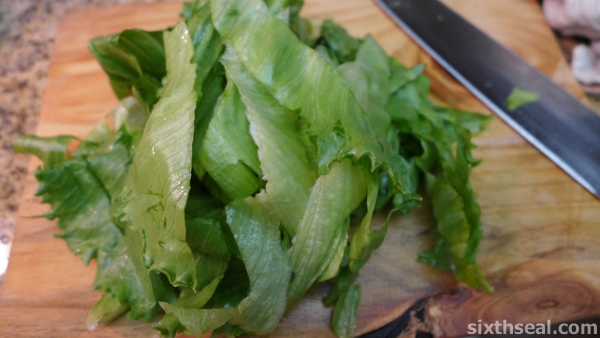 …and went all ninja on the iceberg lettuce. 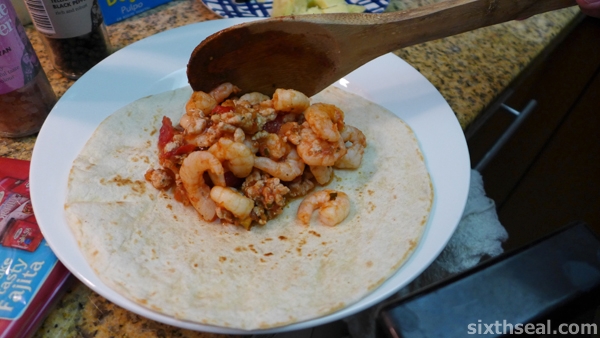 The tortilla wraps were heated for a few seconds on a frying pan (that’s why we used Mexican Discovery, it has a higher moisture content and can be subjected to this) before being used as a base to wrap all the ingredients. 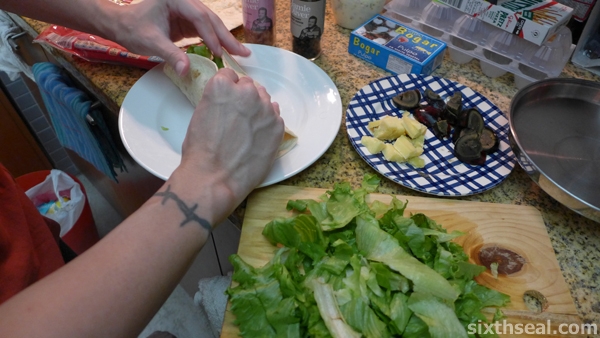 I scooped in the hot pork and prawns salsa mix before adding sliced iceberg lettuce, century eggs and cheddar cheese. The entire tortilla is wrapped up burrito style.

The trick to doing this well is to not over-fill the tortilla wraps. 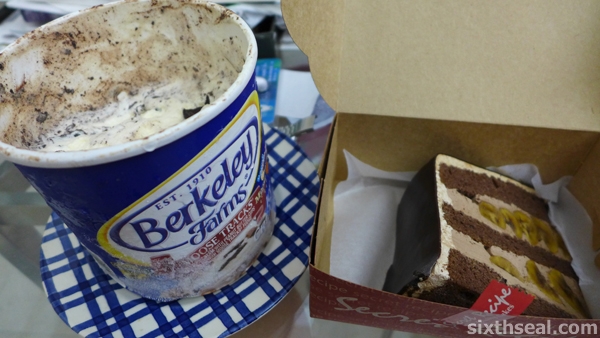 My love came with dessert – a double slice of cake, which we ate with a 1.5 pint tub of Berkeley Farms Moose Track ice cream. The ice cream is loaded with peanut butter cups (kinda like Reese’s Pieces) and fudge and I originally thought this Californian ice cream was pretty crappy but changed my mind after eating it a second time.

It’s a good desert to finish everything off! 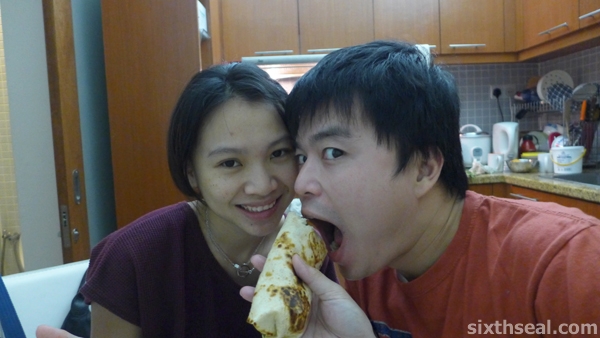 I think it has become somewhat of a tradition for me to cook during our anniversary and I’m glad I managed to do it this time too. I’m lucky to have you dear! *hugs* 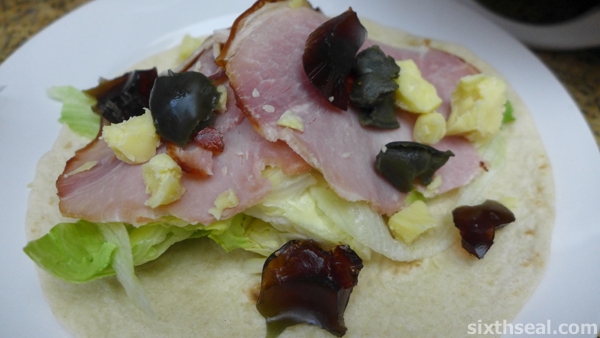 The pork and prawn fajitas may sound a bit weird but it goes well together. Try out the duck century egg and cheese combo – they both have that umami taste to it, and I’ve finished the rest of the tortilla wraps with that and a bit of lettuce and honey glazed ham. 🙂