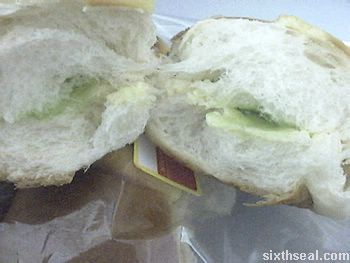 I had a rather large breakfast today. 🙂 Well, technically
yesterday, but still…Anyway, I seldom have breakfast and lunch so it
feels good to eat “breakfast food” for a change. Here’s what I had: 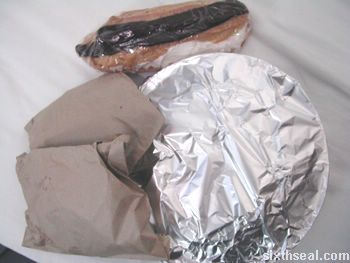 The two paper bags contain egg and bacon muffins. The one in plastic
wrap is a chocolate eclair and the strange aluminium wrap thingy hides
three hash browns and two eggs. The dining room cashier thought it
would be hard to carry that many stuff so she helpfully wrapped it in
foil. How nice. Oh, and I did get “Wow, you must be hungry” again. Heh. 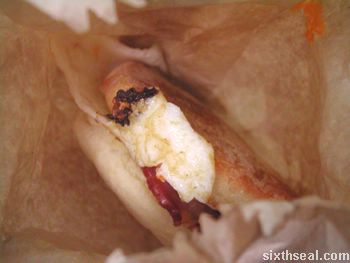 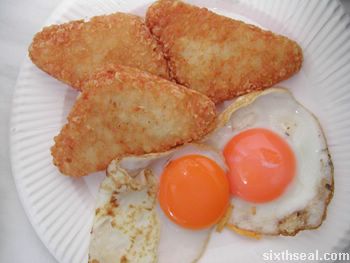 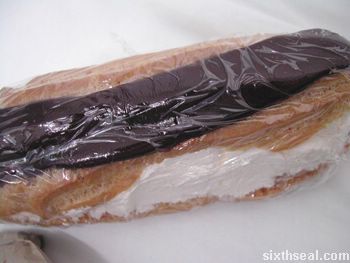 Eclair…the cream filling is so nice, it bursts out whenever you take a bite. 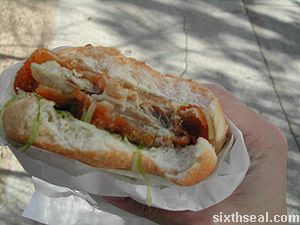 Grabbed a chicken schiznal (sp?) burger with bacon and cheese from
the campus center main cafe while walking back from my tutorials. It’s
surprisingly good. Salty. 🙂 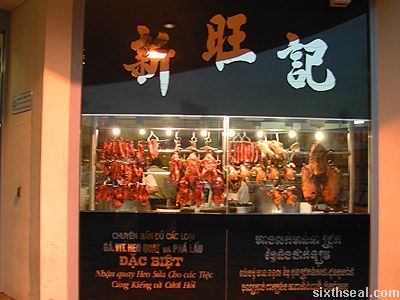 I’m hungry and this meat display (taken in Springvale) is making me
drool. If you squint a little, you can even see the people working
inside. Oh well, I’ll eat after I finish this bit of my assignment.
Check out the trailer of Better Luck Tomorrow (on the main page of the
link below), it sounds like a really good movie. 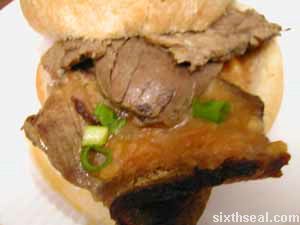 I enjoyed my tutorial today. Where else can you surf websites as
tutorial exercises? Heh. It’s a first year subject I took because I’m
still eligible to take those since I took mostly 3rd year subjects in
my second and third year. 🙂 There’s an assignment due in 2 weeks but
that’s an easy one…could probably finish it in one night. This is a 9
am class, but it’s not that bad, coz it’s held in Clayton. I live at
the halls of residence in Clayton so it’s just a couple of minutes
walk. I’m glad I took two Clayton subjects this semester. The other two
are Caulfield ones so the commute takes much longer. My faculty is
based in Caulfield though. 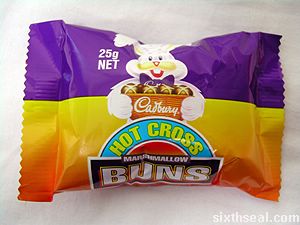 Well, Easter break is coming along soon and that’s a one week
holiday for us. I’ve seen a lot of chocolate Easter eggs of all shapes
and sizes, including huge ass 1 kg ones. However, I’ve never seen these
before. Cadbury’s Hot Cross Marshmallow Buns! I also picked up some
liquorish. I love that stuff, though not many people do because it’s
one of those things you either love or hate. 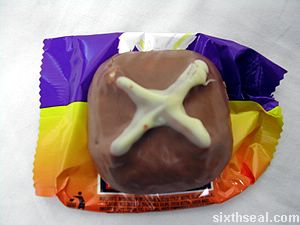 Anyway, I finally deleted my domain from the previous host coz it
was causing problems within the Monash network. I live at halls so that
affects me. I won’t go into the technical details but the way the DNS
server at halls assigns serial numbers makes it think my old host is
the newest entry instead of my new host. It’s been 6 days so my new
name server has probably propagated to even Afghanistan so deleting the
old one shouldn’t be a problem.

Well, migrating Movable Type to the new host was not as easy as I
thought. The database dump managed to load, but logging in gave me an
error. I tried dropping the mt_permissions table and it worked, but
then I lost my user name association with my blog. I tried running some
SQL statements, but nothing worked, so I had to import it using Movable
Type’s import system. What this means is that the pages are renumbered
so all the internal links are messed up. I’ll fix that this weekend. 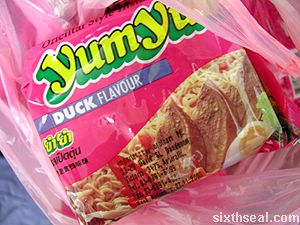 Hmm…should I eat Indomie tonight or Yum Yum? I used to eat a lot of
this stuff back when I was studying in Christchurch, NZ. I only like
the duck flavored ones, it’s really good and quite spicy so if you see
it around, give it a try. I only saw this in Melbourne a couple of
weeks ago and was happy to find it. Ah…nostalgia. 🙂 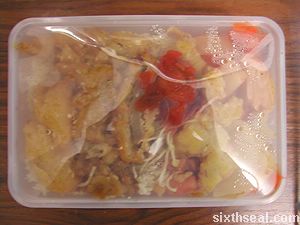 I’m going to sleep after I eat this. I don’t know if it’s still
edible but I’m going to eat it anyway coz I haven’t had anything for
the whole day. 🙂 I bought this rice box ONE WEEK ago and forgot about
it. I left it in the fridge though, so I guess it’s still edible. I
think. Gonna microwave it now and see. Heh.

Do tell me if you happen to see any dead links or missing pictures on the site. Thanks! 🙂

I went out this afternoon for some grocery shopping and also to hunt
down the remaining ice creams in The Sixties Nine collection with
Adrian. It seems that the line is not available in the big grocery
chains like Coles or Bi-Lo but only in small convenience stores and the
stores in petrol stations. Not only that, it also seems that each store
has only part of the lineup so you have to hunt around a bit to get the
whole series. I’ve gotten 8 of them so far (picked up Jami Hendrix
today), and there’s only one last one to finish my collection. 🙂 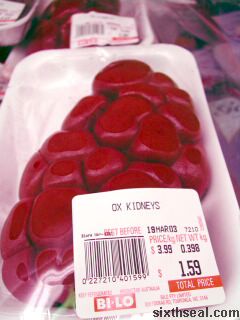 Well, saw something interesting in the meat section of Bi-Lo today. Nice and lumpy ox kidneys.

It also seems that Bi-Lo (Clayton) is doing some heavy staff
pruning. Only two checkout counters are open, the deli section doesn’t
have a dedicated sales person, and there are heaps of weird stuff in
the aisles! You know how people take something and then decided they
don’t want it and conveniently put it out of order at any aisle they’re
currently in? Yeah, there’s heaps of that going around. Juice in the
detergent aisle and stuff like that. I also saw:

An empty wrapper of crisps beside a box of Special K.
A half empty McDonald’s soft drink cup in the sauces aisle.
A 6 pack of pies that someone had poked their fingers through the packaging and even one of the pies, revealing the meat inside.
An eaten yogurt cup in the dairy food section.

Tsk…I was under the impression that the Bi-Lo in Clayton is about to go under.

Anyway, what is up with all the calling cards? Indo Card, Go
Bananas, GPS and several others can’t be used to call Malaysia for the
past few days! Today is the third day I’ve been unable to call out. I’m
not the only one either, everyone using the cards couldn’t call
Malaysia. The error message is always either “The number you have
called is disconnected” or “The overseas network is currently down”. I
tried calling Telstra customer services at 1221 and they said their
cards were fine, so I’m gonna get a Say G’Day one tomorrow. Sheesh, wtf
is up with all the other cards… 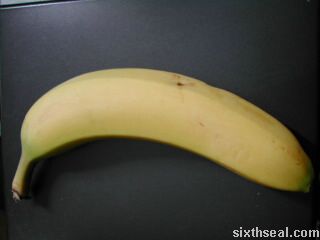 Why do people crave bananas when they’re feeling depressed? My
theory is (I have a theory for just about anything, just ask me), it’s
because bananas naturally contain tryptophan. That is a precursor for
5HTP, which you can also get in capsule form in some health food shops.
No one I know takes 5HTP for anything other preloading or postloading
(softening the comedown from Ecstasy (MDMA)) though. Well, we all know
that serotonin is 5HT2 and 5HTP is a precursor of 5HT2 (serotonin).
This information is all available somewhere if you search for it. Thus,
if we follow this logic and we assume that the body does readily
convert tryptophan -> 5HTP -> 5HT2 (serotonin), then bananas
(which contains tryptophan) is a natural anti-depressant. Serotonin is
naturally produced in your brain and is what actually makes you happy
(to put it in simple terms). And that’s why some people crave bananas
when they’re depressed and that’s why I reached into the fruit bowl
when I went for lunch today. There you have it. I think…:) 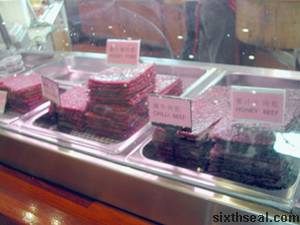 This is the first time I’ve ever seen ba kua (rou kang) in
Melbourne! It’s at a small store at the south entrance of Springvale
Shopping Center. Guess how much a slice costs? A$2.50! Personally, I
haven’t seen ba kua going for RM5 in Malaysia so that sounds steep to
me. It’s pretty good though.