Disclaimer: veritas
[mailto: veritas@sixthseal.com] is a guest author and is not related to
the owner of the sixthseal.com domain. The following report deals with
substances which may be illegal in your country. 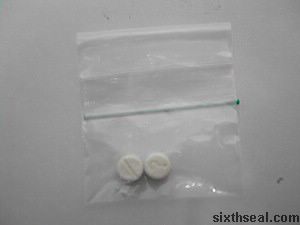 Pill Logo: ?
Pill Color: White with dirty specks
Area: Melbourne
Date: February 2003
Other: The other side has a single score, the ? imprint is uneven and the pill has beveled edges.
Suspected contents: Ketamine

This pill is going for A$20 instead of the usual A$35. That’s nearly
half the price of a normal pill. I didn’t expect it to be MDMA, but
since it was going for such a bargain price, I picked up two of these.
The pill has a ? logo on one side (not imprinted well) and a single
score on the other side. The pill also has beveled edges and has a hard
press. The pill is very thick too, thicker than usual pills. 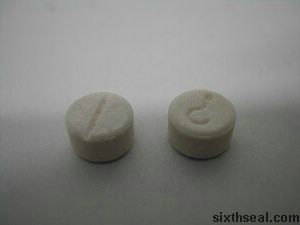 I ate one and crushed the other one in an envelope. The pill isn’t
crumbly and I had to run a dog tag over the crushed pill several times
before it reached an acceptable consistency. I divided up the pill into
two lines and tried to rail it, but it was just too much powder for me
to snort comfortably in one go. 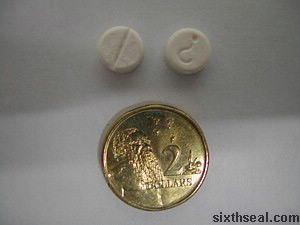 Size comparison with A$2 coin

It burns fairly badly while going up too. I’m not sure if that’s coz
of the cuts or because I didn’t crush the pill up well enough. I just
chucked it into an envelope and banged it about a bit and then ran a
dog tag over it to smoothen over the larger chunks. I did bumps over
the course of the night and it got me fairly high, but I didn’t K-hole.
The effects were felt in a couple of minutes. 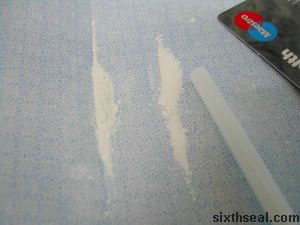 Anyway, I felt very significant nausea when insufflating the powder.
There was a strong psychological aversion to snorting more too, due to
the extreme nausea it causes. It made me retch several times, but after
a while it didn’t matter. Subjective effects seem to indicate ketamine.
I felt numb and dissociated and it didn’t last very long. At the peak,
I was feeling very drunk and it’s quite euphoric. It damn near put me
to sleep too, but I chugged a bottle of diet coke and was fine after
that. I was starting to return to baseline by the 2 hour mark.

It seems to be a nice ketamine pill, but I don’t have tolerance so I
can’t speak for the strength. I wished I insufflated the first pill
instead of eating it though. Personally, I think it’s a good ketamine
pill for A$20 but it’s definitely not MDMA so avoid if you’re shopping
for Ecstasy.