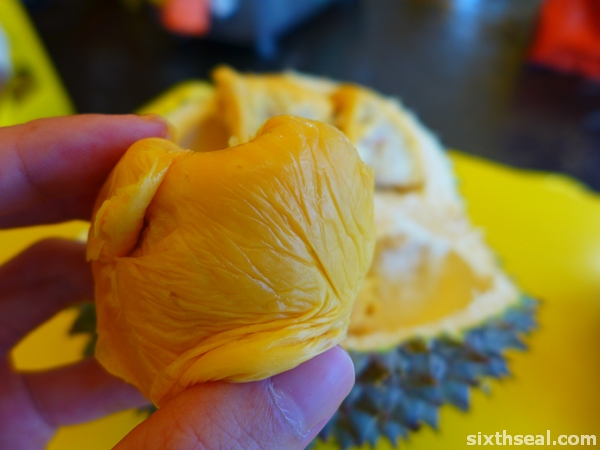 I just came back from a Black Thorn durian session with Poey. I’ve been eagerly awaiting to taste this particular durian since I inquired about it. It’s much more expensive than Musang King (currently going for an average of RM 22 / kg), which is an overrated culvitar IMHO. 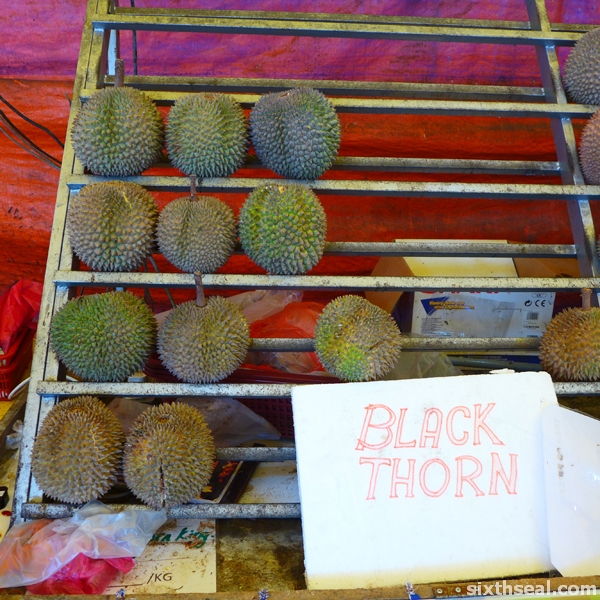 It’s not easy to get either. I dropped by several times and the only stall that sells it says they don’t have stock and I finally got the guy’s number so I can call and check if they have it before I drive over. 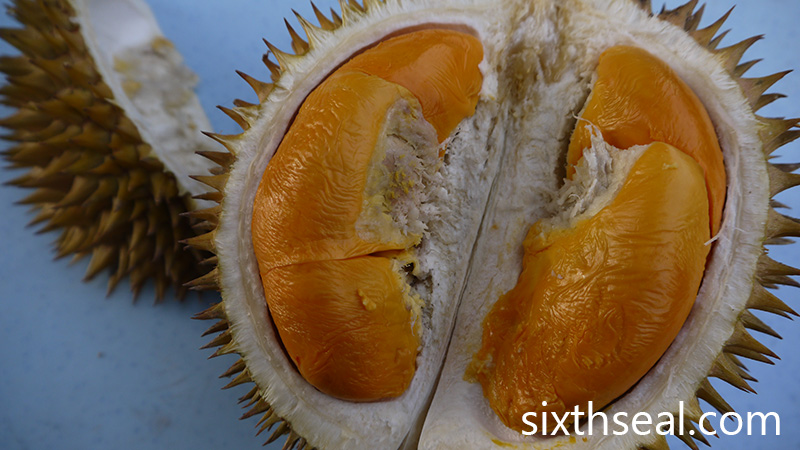 The banner advertising the Black Thorn durian says that it won some kind of award in 2012, which is probably their justification for the high price. The Chinese words seem to translate literally – hei tze (black thorn). 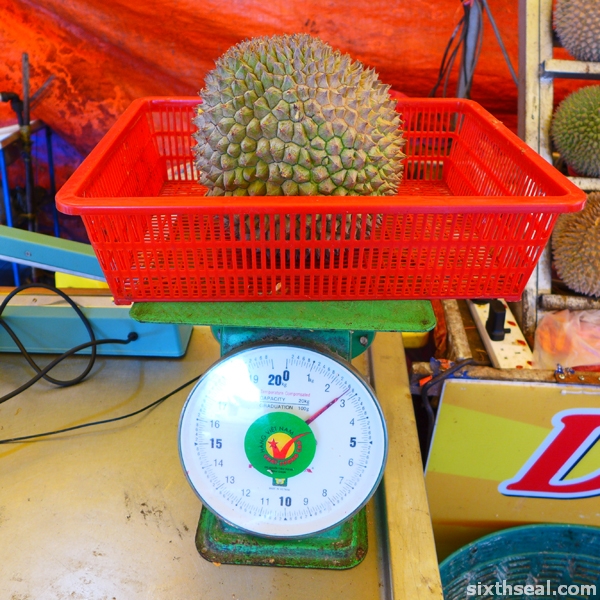 The NEW Black Thorn durian goes for RM 30 / kg. The price didn’t budge until I asked the dude if I can get a lowered price if I come today. He offered it at RM 25 / kg. 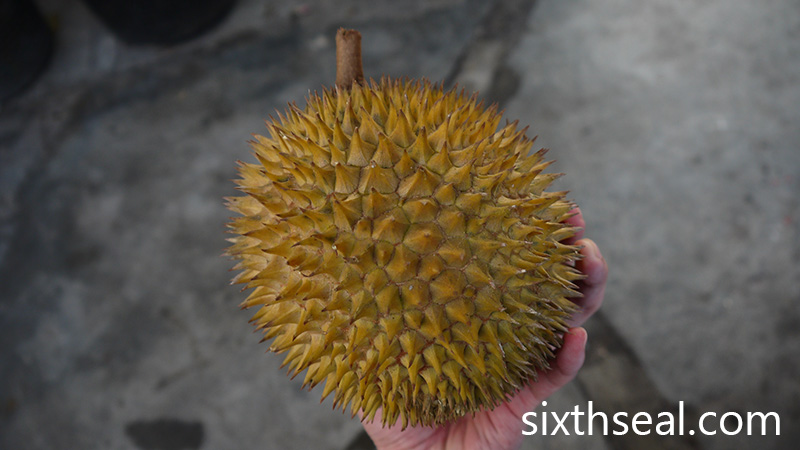 Note that only three (3) durians in the topmost row in the display picture are Black Thorn, the others are just chucked there. The interesting thing I noticed about Black Thorn durian is that it has a flat bottom, much like Musang King: 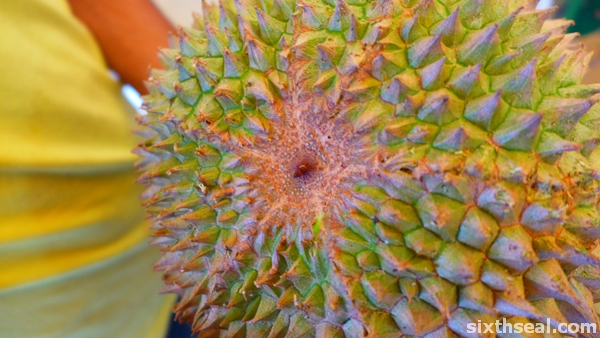 There are no thorns at the end of the durian (opposite from the stalk). This particular durian cultivar originates from Penang and another interesting quality that distinguishes it besides the flat bottom is the presence of a longkang (drain) like Teka durians, except this looks more…er, anatomical in nature. 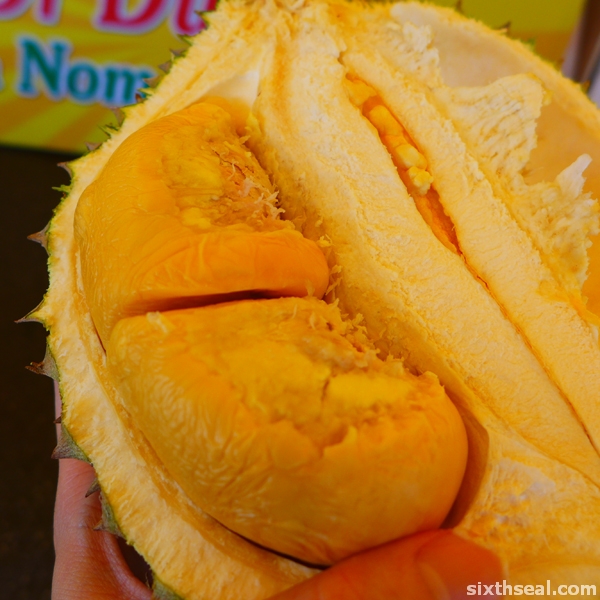 Black Thorn pretty much tastes like advertised – the durian flesh is a bright hue of orange, a color some people like and feel is more palatable. It starts out sweet and has a bitter end note, like XO durians – just as intense but not quite so long lasting. It’s creamy and sticky – the flesh comes off the seed well. 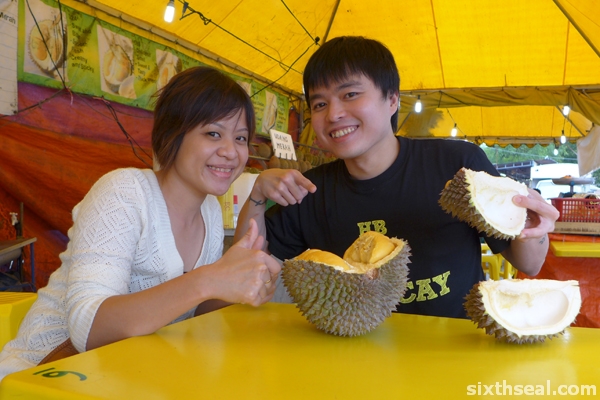 It also has little to no fiber, which is a plus point…it makes the durian coat the palate easily and overwhelm it it does – this is a very rich durian, make no mistake about it. 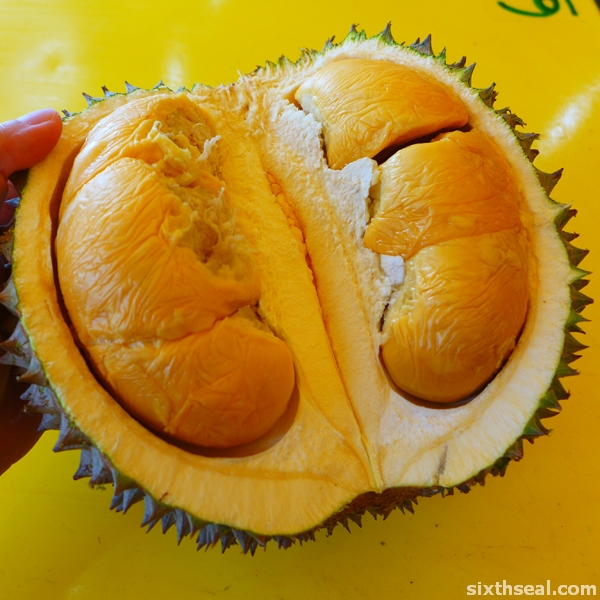 It’s a medium to large sized durian (ours is almost 3 kg) and the others are pretty much in the same weight league. It was sold for RM 65 for this 2.6 kg durian. 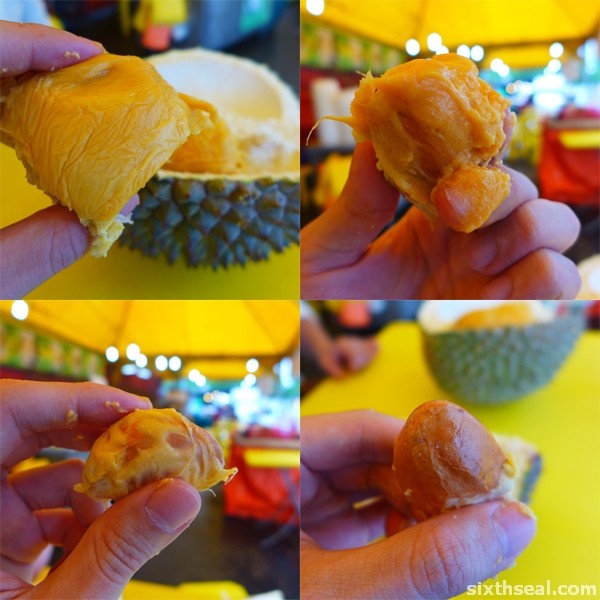 However, there are abundant seeds inside – counted 14 seeds and despite having medium seeds (I don’t call that small seeds, misleading advertising) it does have a lot of flesh on it – quality flesh to boot. 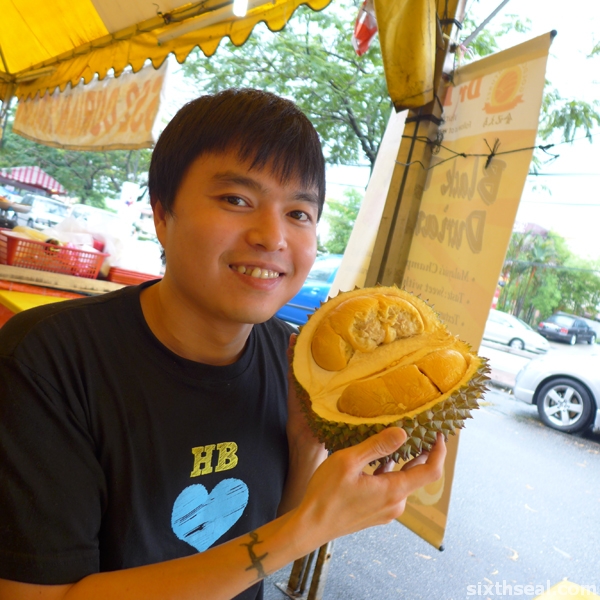 I’ll rate this as a not very complex durian flavor wise but it’s a good, rich and satisfying one. It’s the *KING* of the King of Fruits, price-wise at least. I wouldn’t say it’s worth the price though, but definitely a must try for all durian fans. 😀