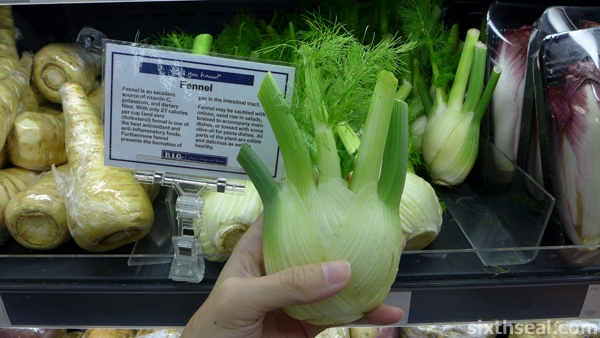 We got a nice bulb of fennel while grocery shopping during the weekend. It was primarily due to the placecard they had – it sounded good so I bought it. It’s not the cheapest thing at RM 31.90/kg and my love is so good that she knew the fennel I was holding would be around RM 6 before I went to the weighing machine. 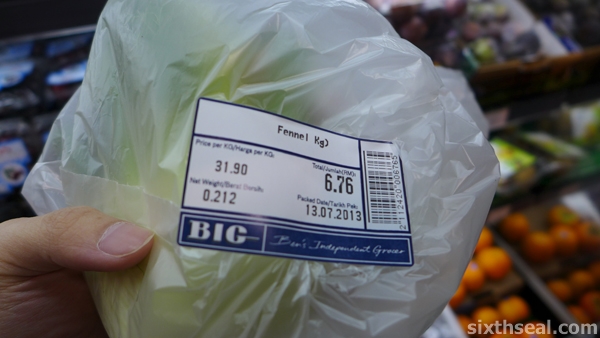 It turned out to be RM 6.76 but close enough for government work!

I like this vegetable – I had to watch a YouTube video to know how to properly cut it (there’s a bit of root inside that requires a wedge cut with a sharp knife) and I gave it to Ling raw to see if she liked it for my next cooking experiment. 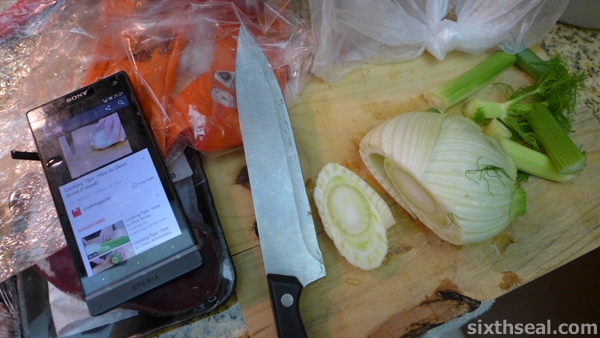 It tastes like liqorice, you know, the black candy that’s sold in a long string. It’s due to the strong aniseed flavor, which can be quite intense when eaten raw but goes away when you cook it. 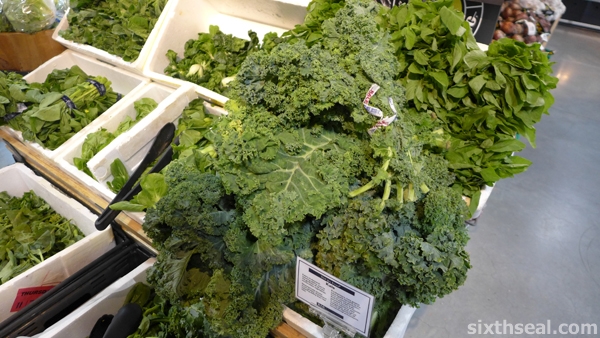 The bunch of curly kale is a US import and quite expensive at RM 52.49/kg. The two stalks we got cost RM 20 and it felt pretty light to me. Kale and fennel are things we haven’t tried before so I wanted to cook it. 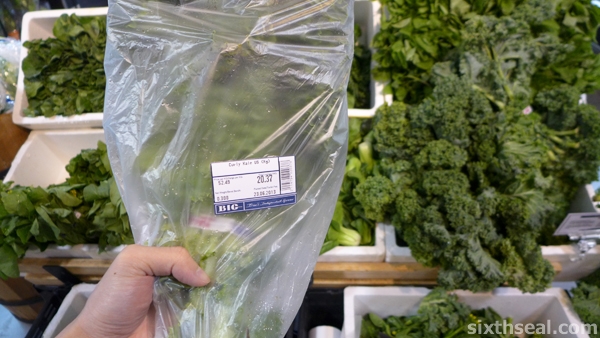 It was done two ways – I already knew I wanted to steam mine but my dear stir fried hers with some shallots and oyster sauce and I must say, it tasted really good! This kale in this dish alone costs RM 10 though but well worth it. 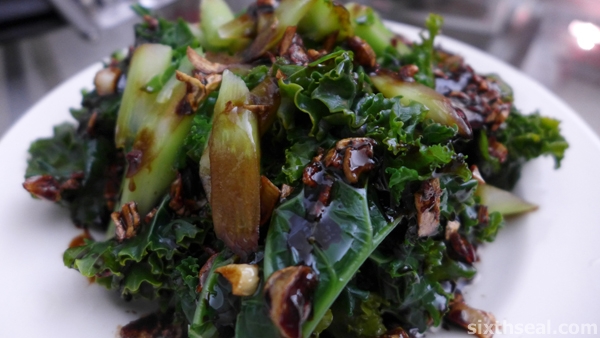 Back to the fennel, I wanted to add it into this new all-fruit wrap that I did for breakfast but I totally forgot about it. It was still an interesting experiment though. 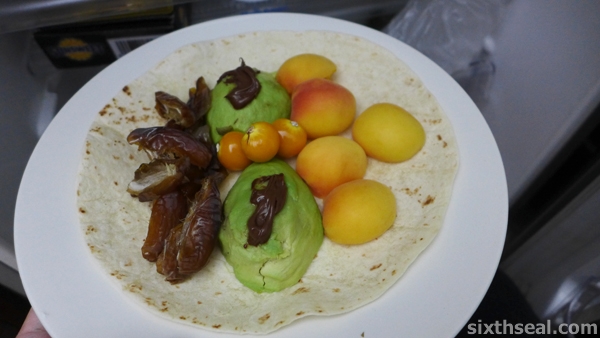 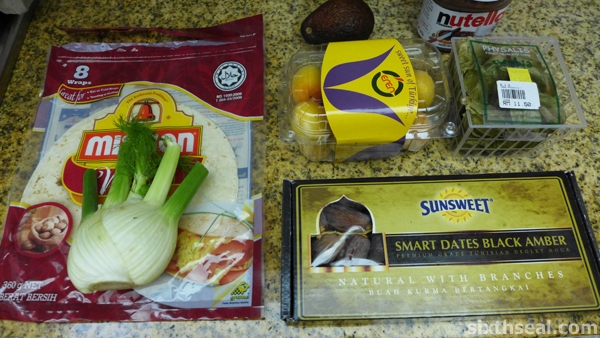 The interesting bit about this all-fruit wrap is that everything except for the Cape gooseberry can be split in half and has a seed inside – the avocado, the apricot, and the dates. 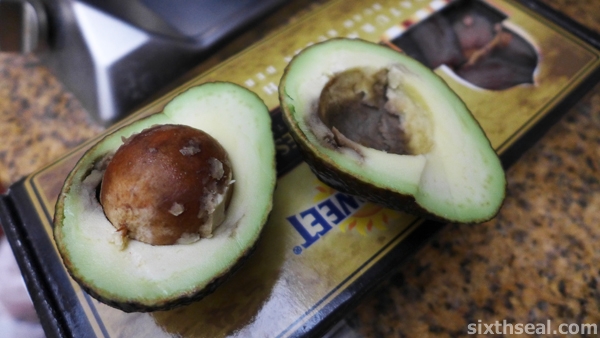 I like eating good dates – these are Tunisian ones still on the branches, semi-dry and premium ones sold under the “Black Amber” label. 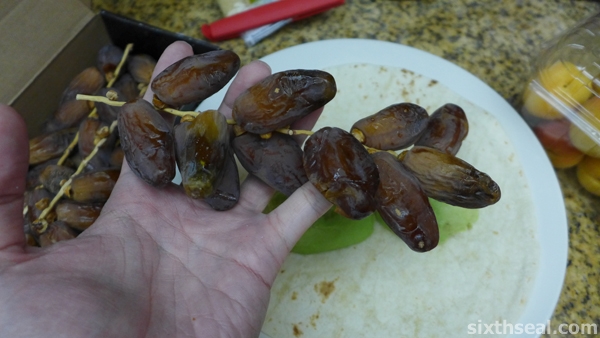 I basically put the avocado (with bites taken out of it coz we were hungry) on first and then added the apricots and dates. 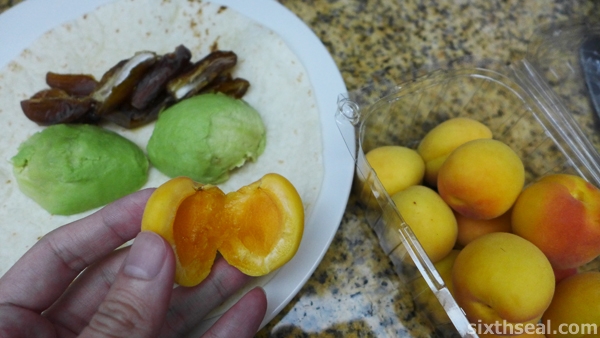 All of these are split in half by hand and the pit thrown away. I just arranged the halves of the respective fruits on the tortilla wrap. 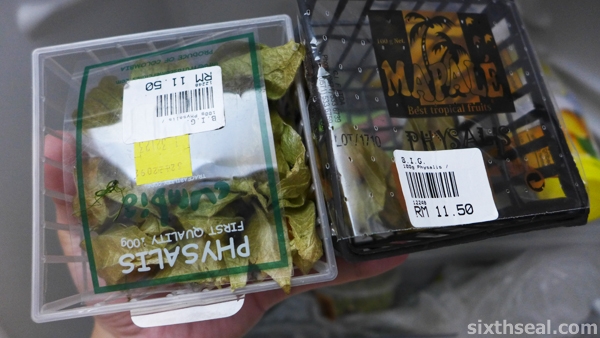 The Cape gooseberry is sprinkled down the middle for an acidic, citrus-y bite. I’ve seen a lot of high end Japanese bakeries use this as a decoration and the shroud (the leaf like things on the side) is *not edible*. I wonder what the people eating those pastries whole would feel like. Heh.

Physalis (which is what Cape gooseberry is marketed as here) is a nice berry though – it’s yellow and the larger it is, the sweeter it becomes. 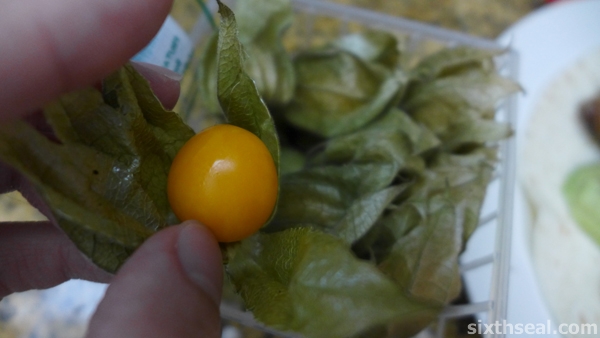 I finished off the wrap by putting a bit of Nutella on top of the avocado (it tastes great together) before chilling it in the fridge for 5 minutes and wrapping it up.

The dates provides the saccharine sweetness, with the apricots bringing it’s own mild nectarine fructose into the mix, and the avocado gives off a smooth mouth-feel with the Cape gooseberries there for a sour bite. 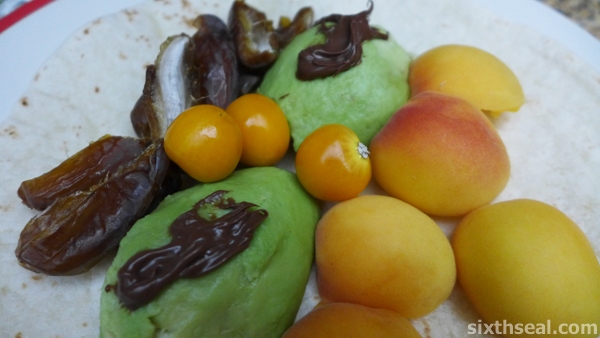 I can’t say it’s a successful wrap coz there’s not enough “moisture” inside – I think adding yoghurt would do wonders for it. It’s still a nice experiment even though I totally forgot about the fennel.

I used all of it for a nice cottage pie, as well as my version of the kale – coming up in the next post! 🙂