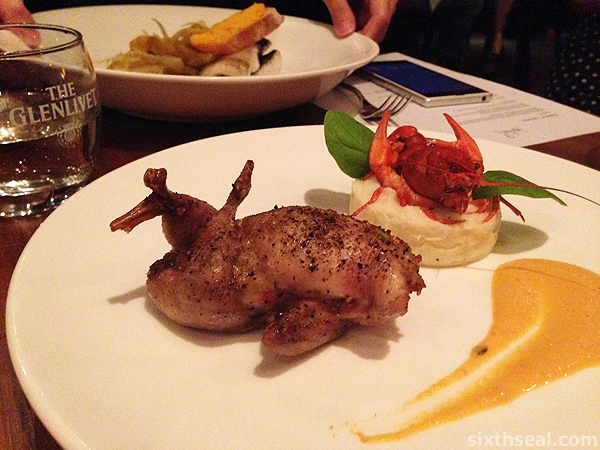 It’s Chef Alexy Fuchs first visit to Malaysia and I booked a table for two on Saturday night at Mezze Bistro in KL, where he will be cooking for a week. I wanted to buy my better half a good dinner experience – it’s been a while since our last 2 Michelin star meal at Le Relais Louis XIII in Paris earlier this year and I thought it’ll make a nice dinner date. 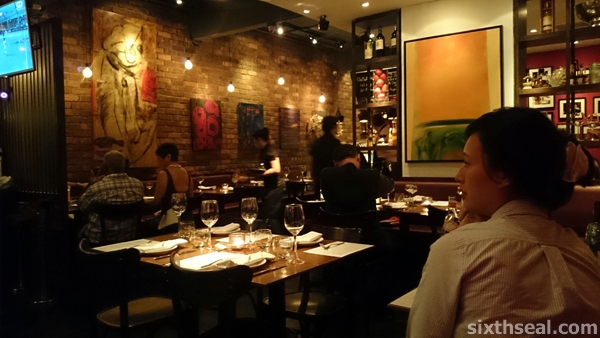 He came over to Malaysia to collaborate with the resident head chef of Mezze Bistro, Yves Pierre Renou, to showcase the cuisine from their home in Alsace, France. There is a similarly named restaurant in London by Michel Roux Jr. with Two Michelin Star dining. This Le Gavroche is located in Strasbourg, France and is helmed by the husband-and-wife team of Nathalie and Benoit Fuchs. 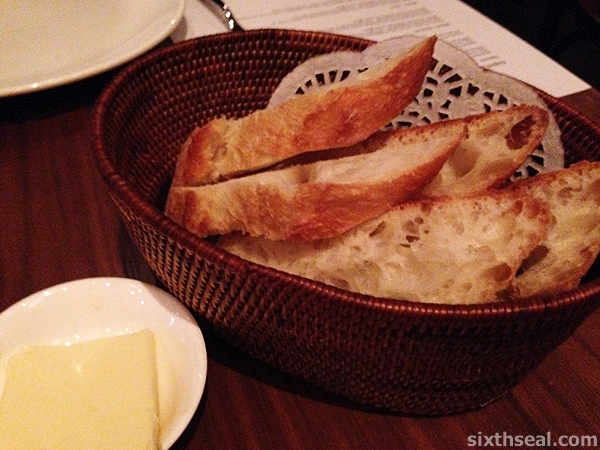 Le Gavroche is a One Michelin Star establishment and Alexy Fuchs is their son and chef. I was really keen to check out the food since he is hand carrying a lot of French produce during his flight over so it’s an awesome chance to experience a Michelin star restaurant chef cooking in Malaysia. 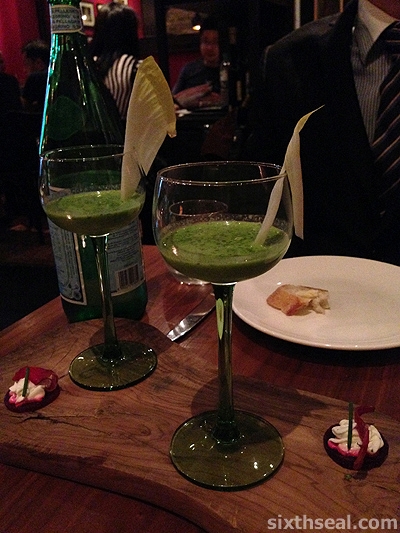 I really like this amuse-bouche. It’s an arugula gazpacho served in a cocktail glass, which I thought sounded really promising for the rest of the night. My better half was a little dubious about how rocket can work, considering the bitter taste of the leaves. It’s blended with fromage blanc (literally white cheese) which works very well in cutting down the sheer bitterness of the greens. 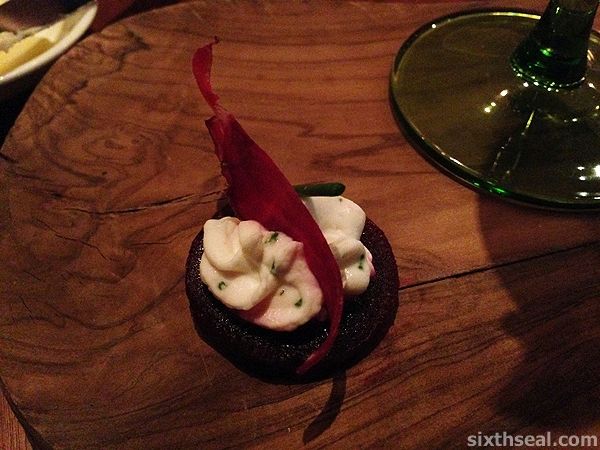 I also enjoyed the little discs of beetroot that produced a nice little crunch with the creamy topping of goat’s cheese. The two goes very well together – the Alsace vinegar in the gazpacho balances the flavors in this two-component amuse-bouche. 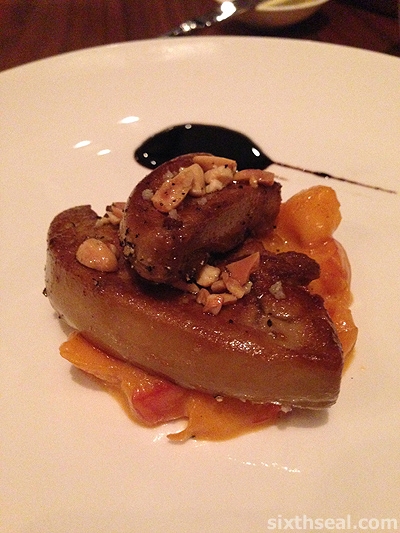 However, I was told that this is goose foie gras – the real deal – and I don’t doubt it. The lightly seared generous slices of foie gras is rich, silky, buttery and melt in your mouth. It’s rich and it’s fatty – the contrast between the browned crust and barely solid center is divine! It’s almost disappears on your tongue into creamy goodness as soon as you pop it in your mouth.

My dear chose this starter since I’ll have my own foie gras in the very classic French dish Tournedos Rossini as my main. I have eaten a lot of foie gras preparations – from pate to mi-cuit and all the way up to whole foie gras and I have to say that this rates as one of the better ones that I’ve had.

It’s no coincidence that Alsace is one of France’s great foie gras producing areas. Chef Alexy Fuchs flew in from that region, bringing the Alsatian foie gras in, so I’m glad we ate it! The apricots at the bottom of the dish went really well with the flavors of the pan-fried foie gras. 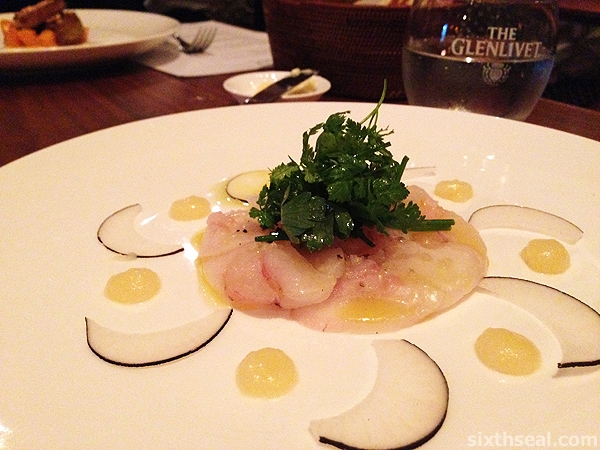 I love monkfish and I love raw monkfish even better! It has to really fresh to serve as a carpaccio instead of a ceviche. This is a dish I am 100% certain that Chef Alexy Fuchs prepared himself coz I walked into the kitchen while he was slicing the monkfish.

This is my entrée and I really enjoyed it. I saw that everyone else at the fully packed dinner service ordered the foie gras (probably coz proper foie gras isn’t very common here) but I was very happy with my monkfish carpaccio. I asked my better half to eat this before her starter coz the flavors are much milder and she gave her nod of approval too.

I actually preferred my monkfish carpaccio – the wonderfully intense citrus flavors in the marmalade dotted all over the plate makes it a joy to spear a few slivers of monkfish to smear on the candied lemon before letting the taste combination hit my tongue. It’s wonderfully balanced and a great entrée to my heavier main. 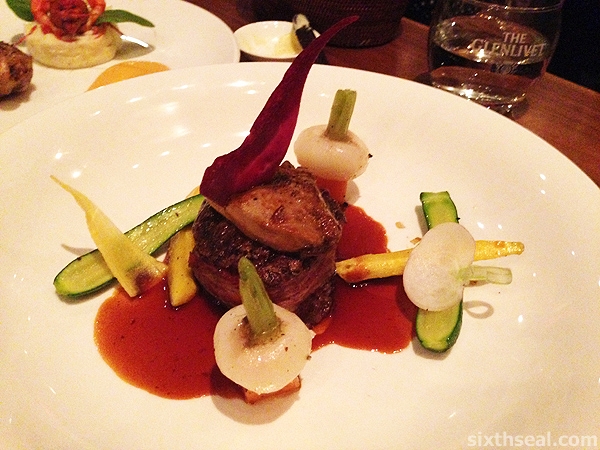 Beef Tournedos is an extremely classic French steak dish. Tournedos Rossini usually consists of a good filet mignon topped with a slice of fresh whole pan-fried foie gras. It’s the most expensive item on the menu but it’s something I wanted to order as soon as I saw it since I’ve had it before and it was awesome! 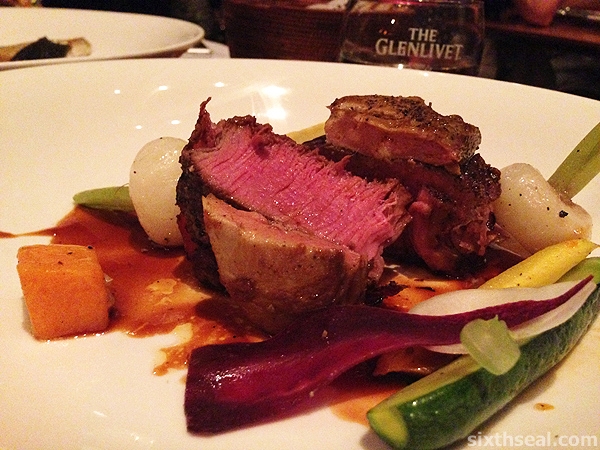 This rendition didn’t disappoint – the steak was cooked perfectly medium rare, with a nice and pink interior. It’s also very juicy and even my better half, who isn’t a huge fan of beef, enjoyed a bite from my mains. I like how the foie gras is placed over the dish – the buttery and silky pan-fried liver almost acts like a sauce when you slice a bit of it to go with a chunk of prime filet mignon.

I liked the mini vegetables garnishing the plate too, but the hero of the dish is hands-down the well cooked steak with a decadent slice of foie gras on top. 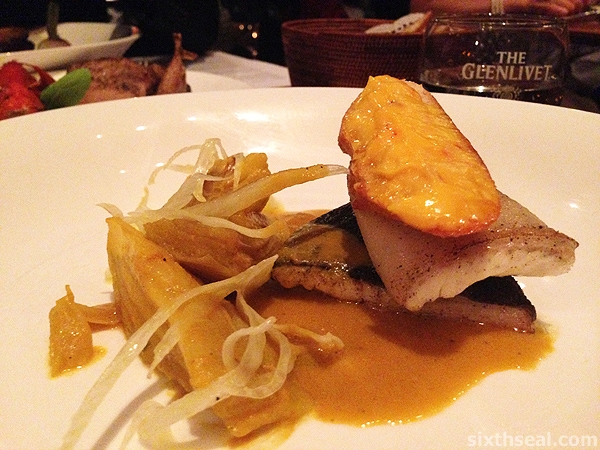 This is my better half’s order. The turbot is excellent – moist and delicious! I like how it’s stacked on top of toast too. I felt the flavors worked very well and I only have one bone to pick (pun intended) – there’s cartilage left on the fish! 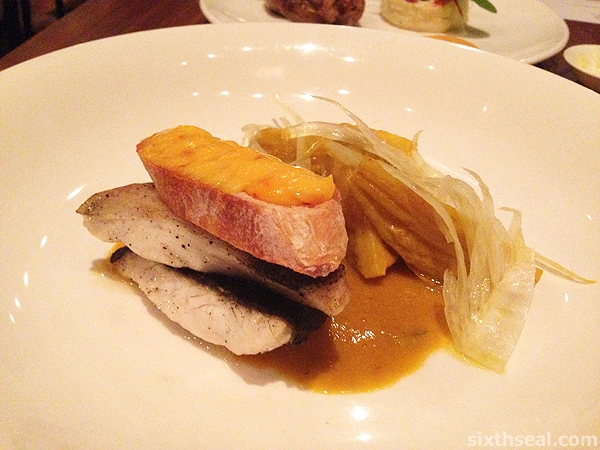 I got it on my first bite when my dear cut some turbot for me to eat and had to gracefully spit it out on my napkin. She didn’t get any cartilage in the next few bites but caught some on the last bite. I felt that the prep cooks should have done a better job at this – it’s not bones at least, but it detracts from the overall enjoyment of the meal. 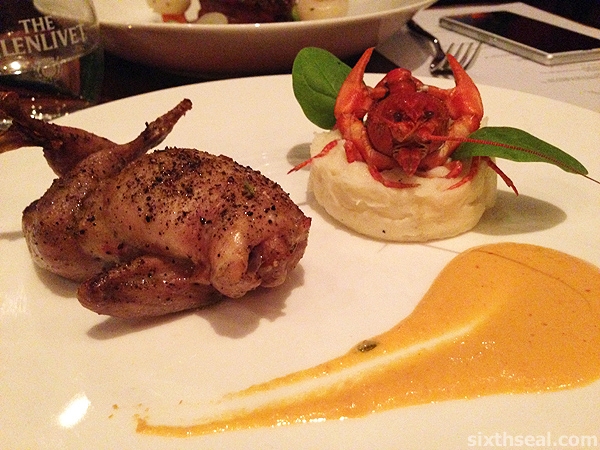 I decided to order ANOTHER main to share! It’s not everyday we go out for a romantic dinner with a chef from a Michelin star restaurant cooking so I thought it’ll be nice to stuff ourselves…and it was the best decision I ever made!

The quail is absolutely fabulous!

There’s no other word that does it justice. It’s our favorite dish of the night! The quail is deboned and seasoned to perfection (it’s really hard to get those small bones, trust me) and cooked just right. Overcooked quail is really inedible – check out the ignorant and lazy street vendors butchering the small bird at Pasar Ramadan and you might think quail is a tough, dry little bird. Wrong! 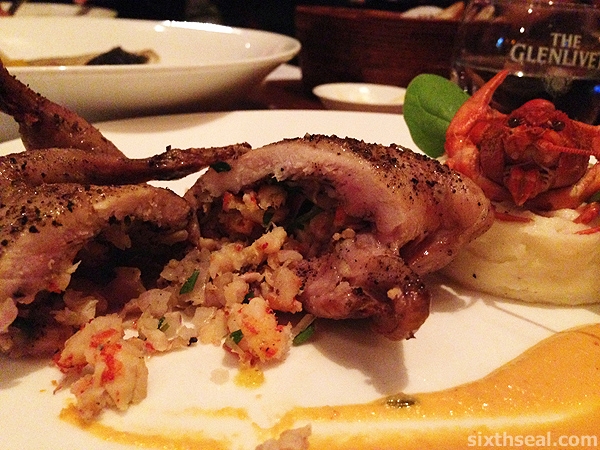 It’s succulent and moist and I was pleased to see that it was still pink in the center. The crayfish stuffing was to die for – simply delectable. There’s a VERY generous amount of Rhine River crayfish inside the quail. Magnifique! Everything in the dish works well, from the mashed potatoes to the little crayfish for you to suck the head juices out of and everything is on the plate for a reason – to rock your world!

It certainly made our night! Best dish ever, compliments to the chef. 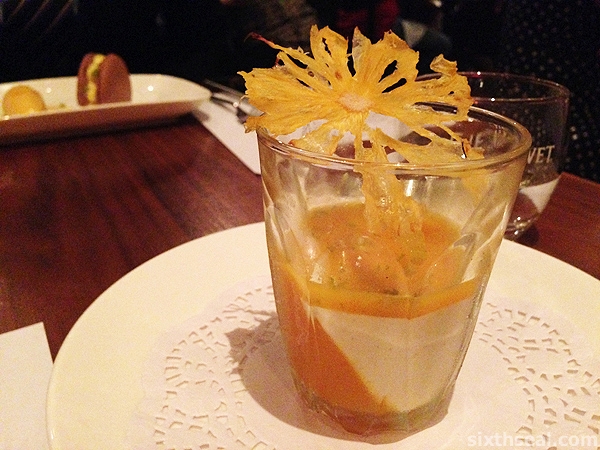 This is my better half’s choice since she really enjoys eating panna cotta. There’s an intensely acidic passionfruit puree inside, which really wakes you up like nothing else! I felt that the two goes very well together and we both enjoyed this dessert – the panna cotta was just the right consistency too!

There’s also a quill of grilled pineapple that acts as a garnish which surprisingly tastes really yummy too!

It’s turns out that no one else ordered dessert around us – we were the only ones, which is a bit of a shame, considering it’s priced pretty well. 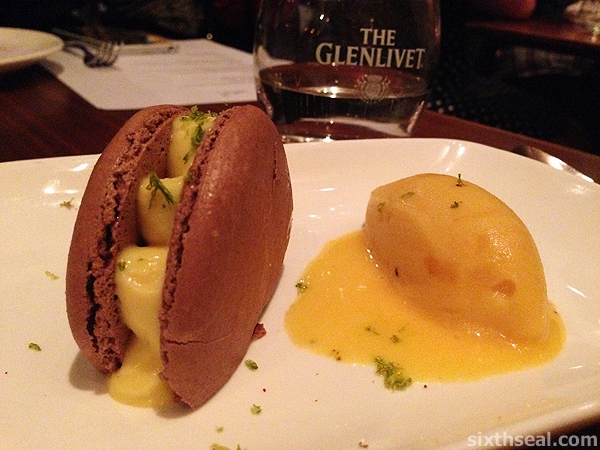 This is actually written wrong on the menu. I was confused when the dish came to me. I asked the waitress if she got the order wrong and Ling Ang came over to tell me that it was the right dessert – the menu was printed erroneously. It’s actually a chocolate macaron (of sorts) with a coconut based filling paired with a passionfruit sorbet.

It’s a perfect dessert for people who doesn’t like sweet desserts – both the desserts are more acidic than sweet. However, I felt that the dessert was rushed out and I personally didn’t feel that it’s a very well made dessert. I was really looking forward to his Caramelized Brioche with Beer Poached Pear and White Cheese Sorbet (RM 30) but it was only available on Tuesday and Thursday. 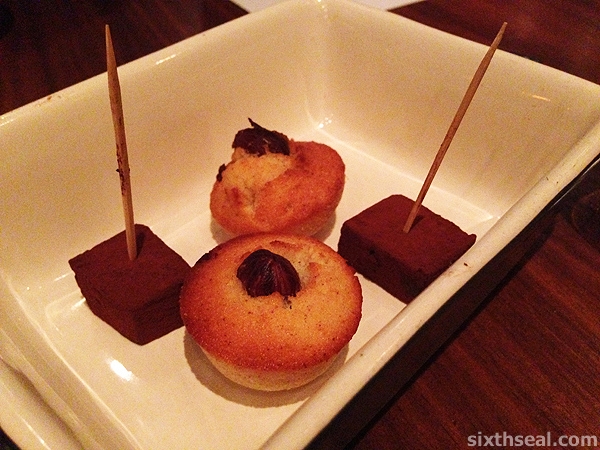 The two desserts we ordered were too simple with really basic flavor combinations. We enjoyed it, but we certainly *weren’t* blown away. I can’t help but feel let down after the awesome entrées and main courses. The complimentary petit-fours really saved the desserts department though! 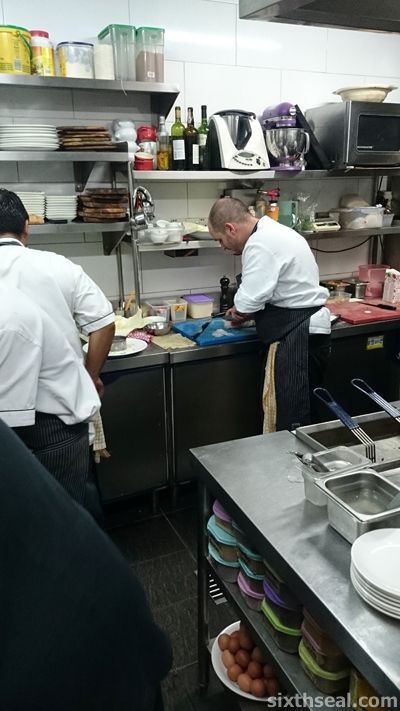 You just have to remember that Michelin stars are awarded to the venue so there’s no white tablecloth service and all that here. A lot of the things they do locally is a faux pas in French haute cuisine – asking to clear tables before both parties have finished dining, not serving the lady first etc but I guess that’s a product of Malaysian culture. Once we got the great floor manager Ling Ang and the friendly and accommodating waitress Juney to serve us, it was smooth sailing. 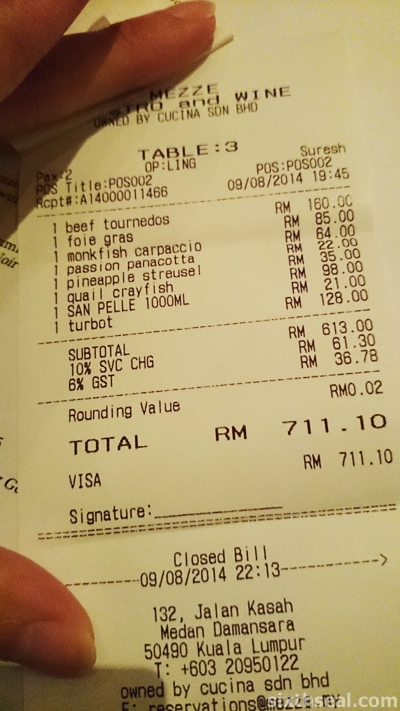 It’s not everyday you get to have a Michelin star restaurant chef come over and do a collaboration so I thought the experience was great and the food was good overall, especially the perfectly cooked stuffed quail! Our bill came up to a total of RM 711.10 for two without wine (we shared a bottle of San Pellegrino sparkling water) which is very reasonable for KL standards considering the food and chef. 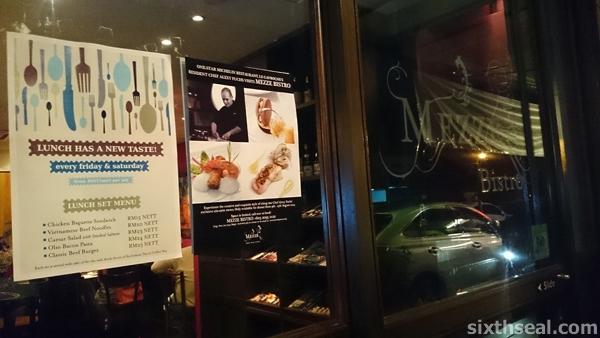 I nearly missed Alexy Fuchs trip over coz I didn’t check my email for newsletters – the lounge sends out the occasional update on food happenings which sometimes goes into spam. This isn’t an invited review by the way, that was done in the afternoon and it wasn’t my cup of tea. I paid full price for the dinner coz I wanted to have a romantic dinner with my dear and you can only get that intimate ambience on a fully booked Saturday night by reserving a table. 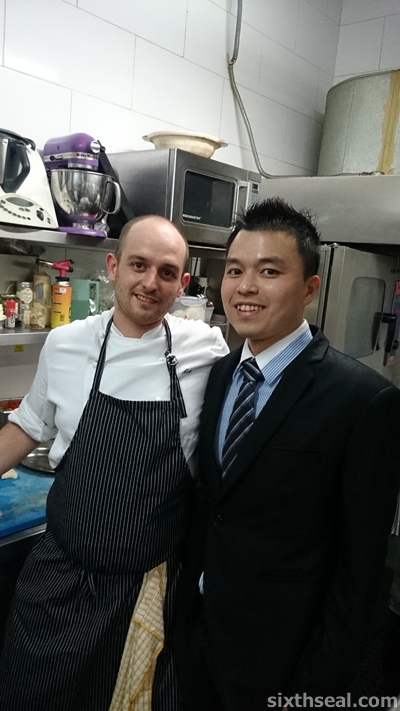 I also got to meet Alexy Fuchs – thanks to Ling Ang who let me into the kitchen to say a quick “Bonsoir” to the chef! He was really nice and down-to-earth and I put up an Instagram photo of us in my SixthSeal.com Facebook page, which he shared on his personal Facebook page and said something to the effect of “even 10,000 miles away, the people here knows of the famous Le Gavroche by Nathalie and Benoit Fuchs” and tagged his parents which I thought was a cool thing to do. 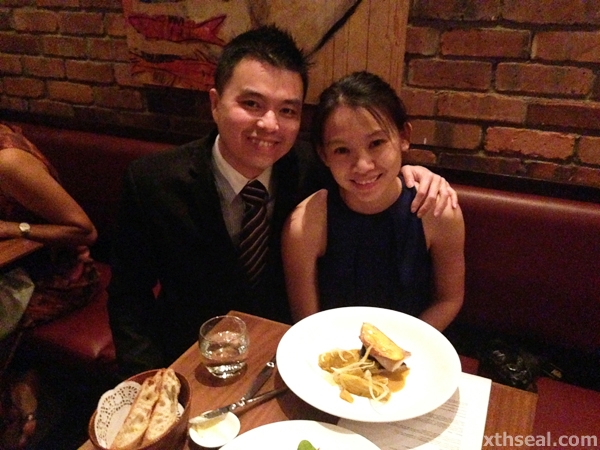 It was great night out and we both enjoyed ourselves immensely! 🙂