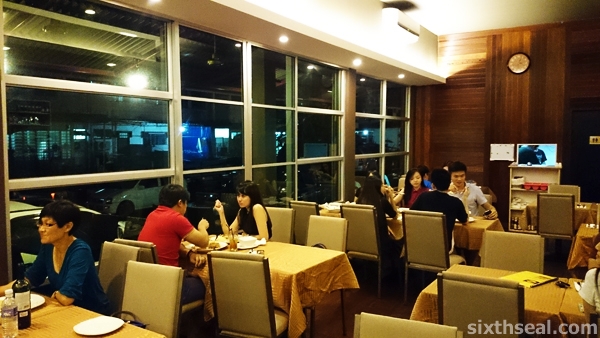 Aussie Story is new – very, very new. It has only been open for 4 days and we went on the fourth day of their operations. No newspaper advertising, no Facebook/Twitter/Instagram page, just pure old school word-of-mouth accompanied their soft launch and it’s been packed every single night ever since they opened their doors!

The congratulatory wreaths that celebrated the launch were still fresh! We didn’t know about the place, we chanced upon the restaurant by accident and decided to go in and take a peek at the menu. It’s a very nice place – you can say that the warm, soft-incandescent lit interior called out to us on a rainy day. 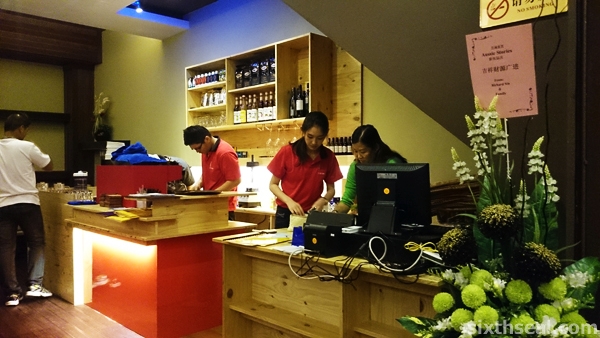 The place is a joint venture between two friends who’ve been classmates since their school days. Fredrick Wong is the barista and he’s in charge of the front-of-house while his partner Johnny Yong is the head chef and manages the back-of-house. I think this division of labor suits their personalities well, according to the long conversations we had with the both of them.

Aussie Story is still in the soft-launch stage so a lot of the items on their menu is unavailable, like the pita bread that I was interested in. Thus, we asked for recommendations and got: 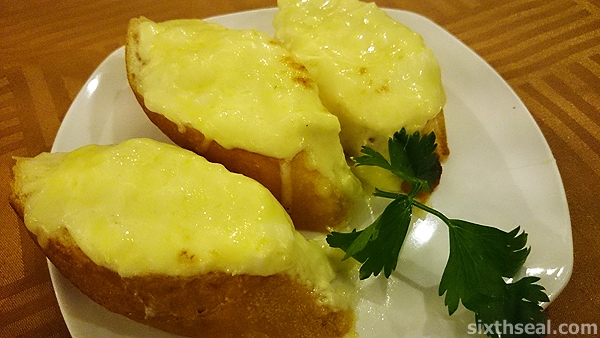 This is the appetizer that Johnny the chef suggested. He almost insisted on it, so Arthur and I ordered it to see what the fuss is all about. It’s a baguette that’s been sliced and covered with melted cheese, finely chopped cubes of hard-boiled eggs, and an acidic element (the chef hinted it was based on the Thousand Island dressing).

However, it came out so fast I could see that only 2 of the 3 pieces had been browned properly. I don’t mind the chewy texture of the bread but I think it could have been on the oven/toaster/grill for a couple of minutes more so the Maillard reaction and caramelization would have been more even.

I thought I would dislike this pale looking appetizer but I thought it was delicious! The cheese and mayo works very well together and you can still taste and feel the texture of the tiny cubes of hard boiled eggs in the topping. There’s also a sour note which really made the dish!

The flavors works very well together and we both enjoyed it very much. 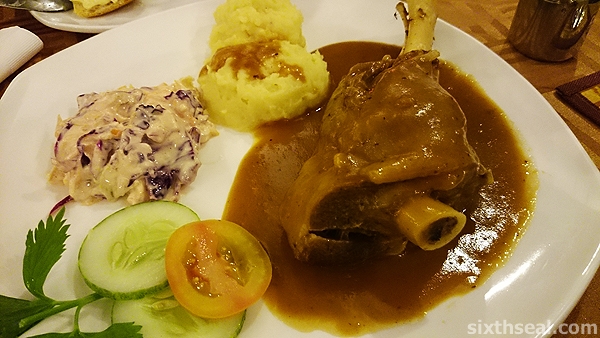 I was surprised when this came out almost after the appetizer. It has barely been 5 minutes since we placed our order! The lamb shank is slightly smaller than the ones that I’m used to seeing but it tasted alright. The meat fell off the bone when picked at with a fork – a sign that it’s been slow-cooked to perfection.

I also liked how they left the cartilage on the top of the shank – the best part of ordering the lamb shank, I reckon. The mashed potatoes were good and I really liked their purple cabbage coleslaw. 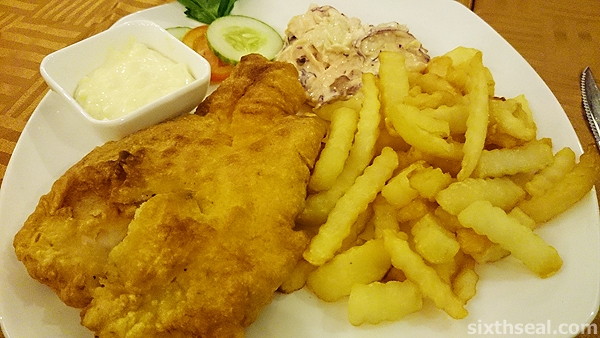 The fish and chips were made with good fish and the batter was seasoned well. It’s great value for the price too, since you get a huge fillet of fish (which is not the 50% filler, 50% fish abomination that’s been passed off as Dory fillets – they use proper fish fillets here).

The dipping sauce keeps up with the times too! They don’t use tartare sauce (despite what it states on the menu), it’s a pet peeve of mine when F&B outlets do, it’s so 90’s school canteen and it’s usually used to cover the taste of bad fish. Restaurants have found better combinations to go with good catches now and the last time I remember having tartare sauce was during my high school in Christchurch, NZ when the school canteen would serve fish sandwiches slathered with tartare sauce.

I’m sure I’ve had tartare sauce in bad local fish and chip outlets since but if I had, it wasn’t memorable enough to remember. 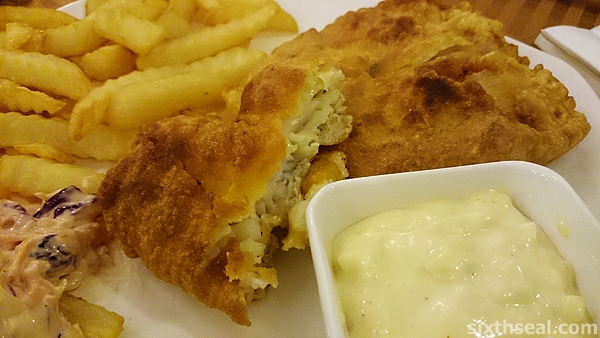 Aussie Story uses a mayo based egg infused dip which I thought was very nice. It reminded me slightly of the dill aioli I had in CREST Café, Birubi Beach recently.

I think it’s actually the *same sauce* that goes on top of the baguette appetizer, but without the acidic component. The purple cabbage coleslaw is also the same as the one served in the lamb shank. Overall, I quite liked the dish. 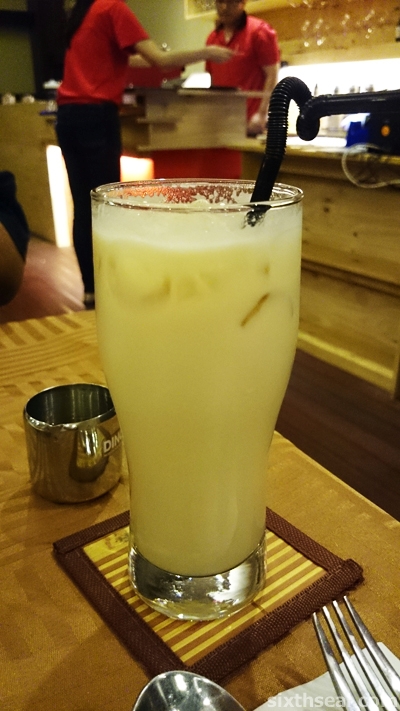 I think it’s smart of them to incorporate similar and reusable things across dishes to minimize prep time. Fredrick and Johnny recounted the first day they opened and the trials of having to serve a full house, and having to comp a lot of tables since they couldn’t keep up with the pace of service. 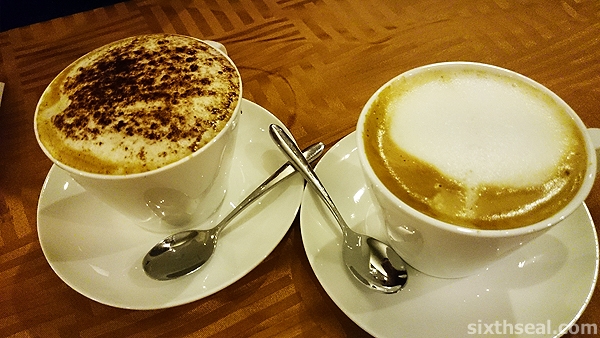 Fredrick did address this when I raised my concerns though – it seems that Sibu people like having all their dishes on the table at the same time so they can share it. There’s no concept of waiting for a 3-course dinner here and I have to agree with him. It’s not Aussie Story’s fault, it’s the culture here and they have to accommodate for it lest people complain about their food not arriving promptly.

The service is impeccable and they really want to learn – we were solicited on our views of every dish. I told the owners that I was very impressed that the head chef and the front-of-house manager would take the time to go to every table and talk to the patrons about the food. We got all our drinks comped by Fredrick so the bill only came out to a discounted RM 60 for the food.

I would highly recommend this place due to the service – their PR is second to none and their food is pretty good overall. It’s up there with places like Tom’s Too but the service here is spectacular. It’s their passion after all, and I went back Saturday night with my dad to try and get a table, but the place was totally full. 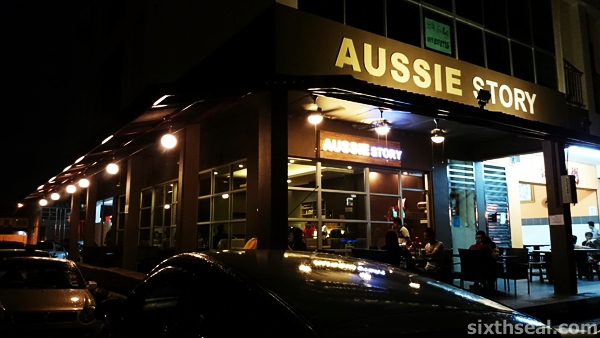 I really enjoyed the ambiance of the place and it’s the best service I’ve ever had in Sibu – totally customer oriented. Fredrick insisted on serving us coffee (they use CoffeX and Bristot) on the house when I asked to pay the bill too – which is a nice touch. There is a reason why the restaurant is called Aussie Story but I’ll let Fredrick tell the tale since it sounds more passionate coming from him – it is, after all, his story. 🙂