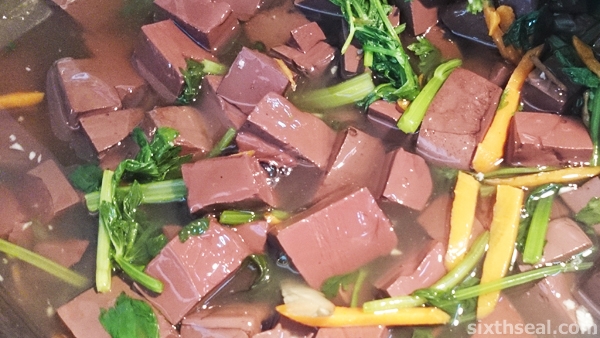 I was pleased to find pork blood during lunch and I went back again yesterday to get some more of it. There’s good pig blood curd and bad ones and it’s all in the making of this delicacy. There’s a lot of criteria which we go through to pronounce a piece of pig blood curd “good” – texture, taste and mouth-feel.

This one has a firm texture with a hint of iron that tells your brain it’s eating blood and it doesn’t completely dissolve once you chomp down on it. I don’t like excessively mushy pork blood and this one is soft and smooth yet retains a certain firmness – perfect!

I found out that pig blood curd originates from blood rice pudding (a similar preparation to blood pudding/black pudding in the UK) and was initially made with duck! There’s an article in Wikipedia that states that early Chinese villagers turned to chicken as a source of blood due to the high price of duck but it was unable to coagulate so they used pigs instead.

That’s not true as we’ve had awesome chicken blood curd in Thailand – which reminds me, I haven’t blogged about the meal, I was just talking to my better half about the street food stall the other day.