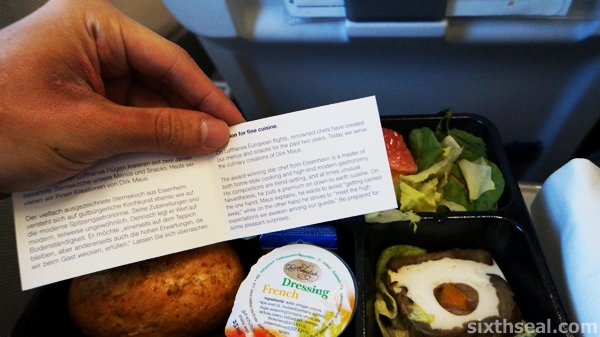 I was fortunate enough to be in the right place at the right time to experience this exclusive event – a meal prepared by Chef Dirk Maus of Restaurant Dirk Maus in Domherrenhof, Essenheim in Germany. He holds One Michelin Star and was invited to do a short collaboration – Lufthansa x Dirk Maus.

His meals are only available between April – October 2012 for European flights on Business Class only (there is no First Class for domestic flights). I fulfilled *all three criteria* when I flew from Berlin to Frankfurt on the 25th of June 2012 and was pleased when the cabin attendant told me about the specially crafted menu by Dirk Maus.

The dishes are all from Rheinhessen – this is Chef Dirk Maus’ interpretation of the cuisine in the largest wine producing region in Germany. He’s taken the time to perfect his creations for 35,000 feet since things tastes different when you’re flying. My better half (who shared a delightful meal at the 2 Michelin Star Relais LOUIS XIII with me earlier this year) told me about how tomato juice goes well with flying and it actually has a scientific reason!

The two culinary treats awaiting for us on board was: 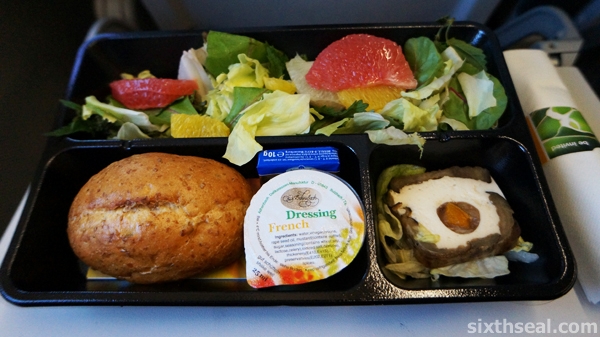 I had just recovered this batch of photos from a damaged HDD and also found the “tasting notes” which I have recorded on my phone as soon as the flight attendant told me that I’ll be having a meal created by a One Michelin Star chef. Heh. I liked the nettle salad – some of the leafy greens in there are quite bitter but it’s tempered well with the mild nettle and the juicy grapefruit and orange segments.

I’ve eaten a lot of terrine and this is visually different from the terrine which I’m used to eating. The contrast between the white goat’s cream cheese in the middle and the aubergine outside was accentuated with a chunk of apricot in the middle. It makes for a very rich and rewarding experience – I didn’t know eggplant could taste this good and it’s seasoned well – salty, but not overtly so. 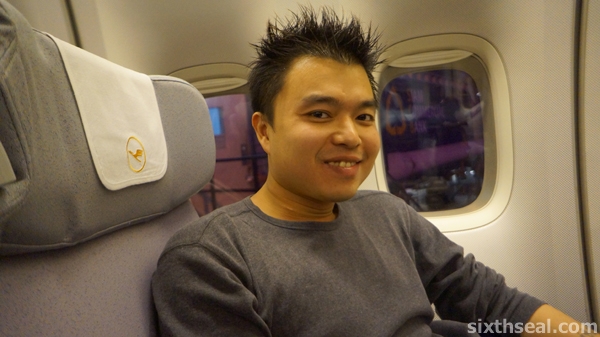 I wished that I was on a longer flight so I had a more substantial meal. This is just a small meal on a short hop on a domestic flight in Germany but I’m glad I had the chance to eat Chef Dirk Maus’ creations during such a limited time (and place) promotion. Eating a Michelin star meal at 35,000 feet is one of the more unusual places I’ve done it too (the other being our rented apartment in Paris).