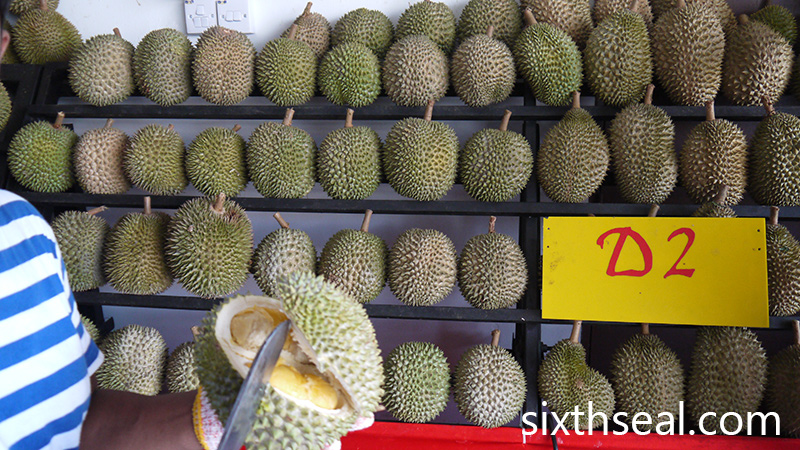 I was searching for Tai Yuen durians over the weekend and drove to Donald’s Durian new Section 19 place (which is just around the corner from their old SS2 stall). I haven’t been here in a while coz their old place was so huge that all the interaction was with their hired workers, some of whom couldn’t explain the different durians properly and just wanted to get the sale done. 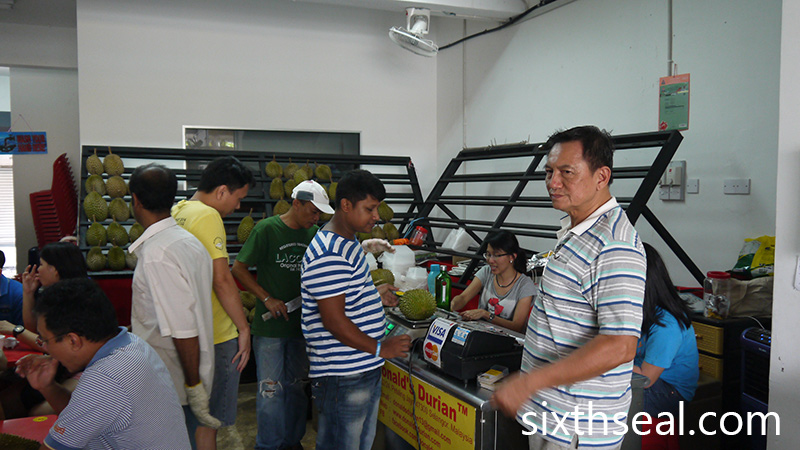 That was in the past though – there’s no such problem now, their latest location is smaller and the owners and key people are all there at your disposal. I met Cindy (who somehow recognized me from my blog) and she told me all I wanted to know about their durians. Unfortunately, the Tai Yuen durians were all sold out. 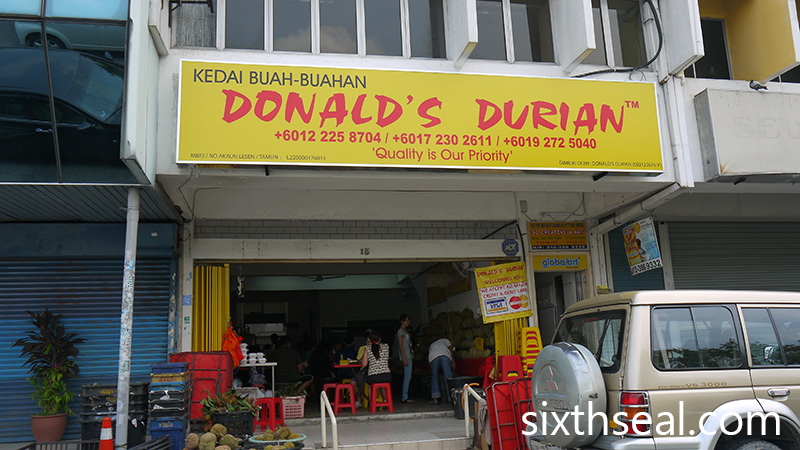 I was told that the Johor durians season is ebbing right now (though it might start again) so all the durians are from Pahang. The service is extremely friendly and knowledgeable – two things I look for in a durian stall. It also helps that their goods are very fresh due to the high turnover and all the durians just fell and came from the orchards on the very same day. 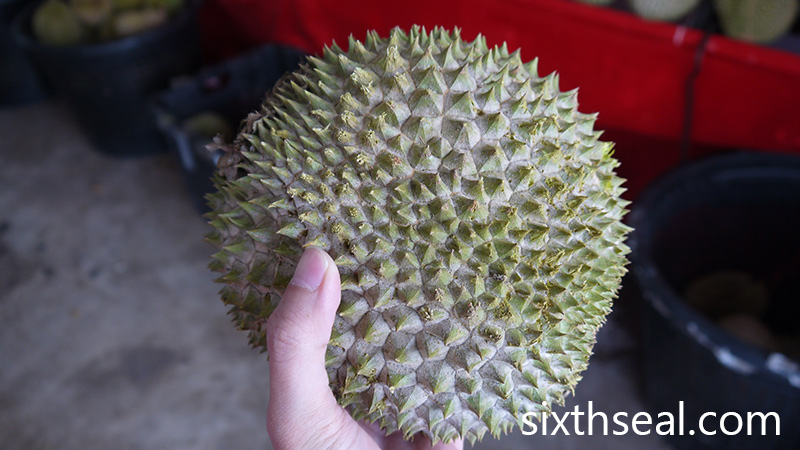 This D18 Durian is a slightly bitter durian with large seeds and very little flesh. I haven’t eaten it in a very long time and I wanted my better half to try it too. The durian is almost perfectly round with a very thick skin. There were only 4 locules in my Durian D-18 with 2 pods each (one had 3). That comes up to just 9 seeds and flesh from one 1.4 kg durian. 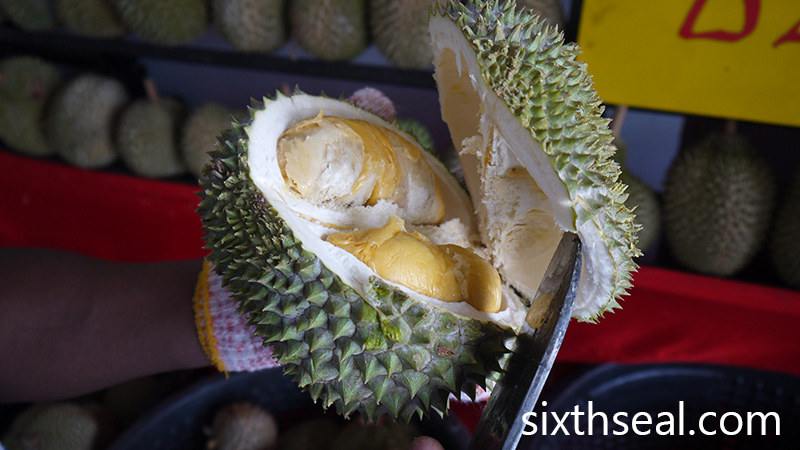 Furthermore, the flesh surrounding the seeds is extremely thin. This isn’t a meaty durian, you eat it for the taste. 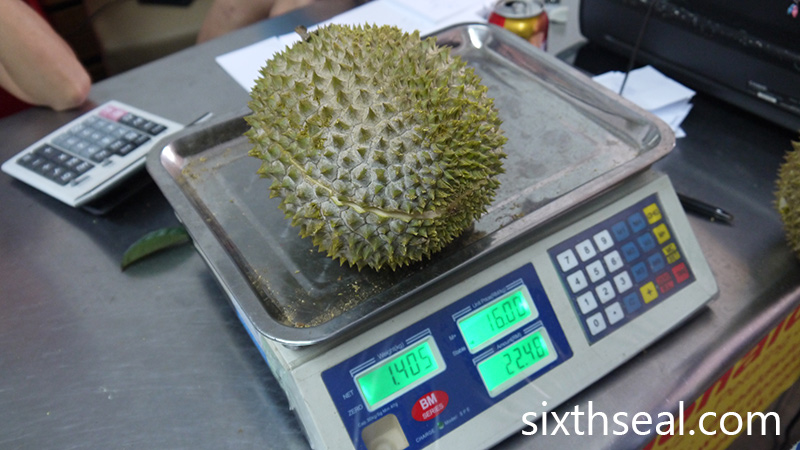 The large seed combined with the meagre flesh doesn’t make this a very popular durian clone but I was after the less popular ones this weekend, to introduce to my dear the sheer variety that durians exhibit and the extreme difference between the various clones and cultivars. 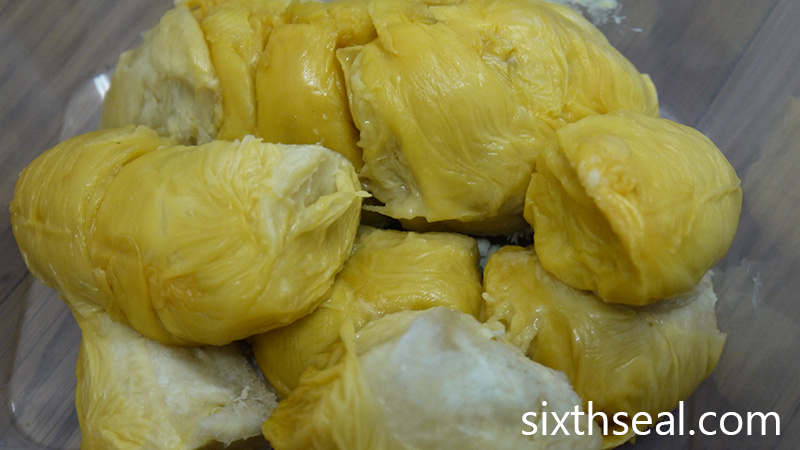 The D18 Durian is good for what it is – a simple durian from the older days with very little (albeit tasty) bitter and fibreless flesh and large seeds. I’ll call the flesh on the seeds more like a coating than flesh per se. Haha. I love the characteristic wrinkly skin of the D18 though. It’s a bit of a curiosity and I highly recommend it if you haven’t tried it before. 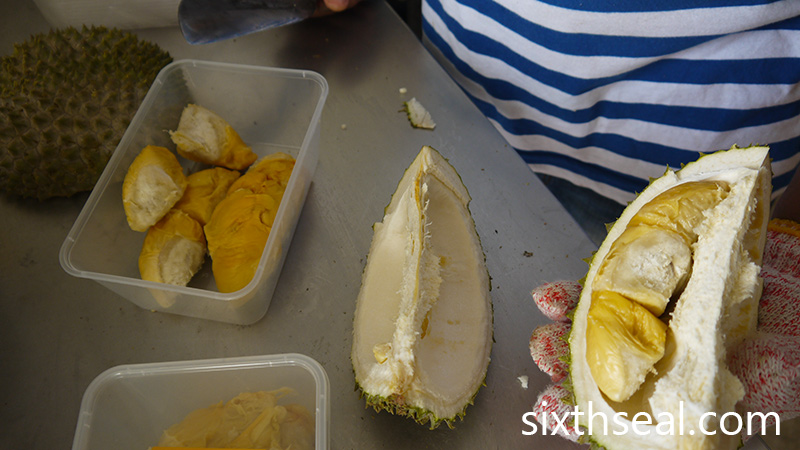 It won’t be the cheapest durian out there since the total amount of flesh you can get from one would barely make you satiated, much less full. The D18 Durian’s weight mostly comes from the large seeds and thick skin. It’s is listed at RM 17/kg so this fruit cost RM 24, but if you’re a true durian fan, you’ll want to get your hands on one just to see what it’s like. 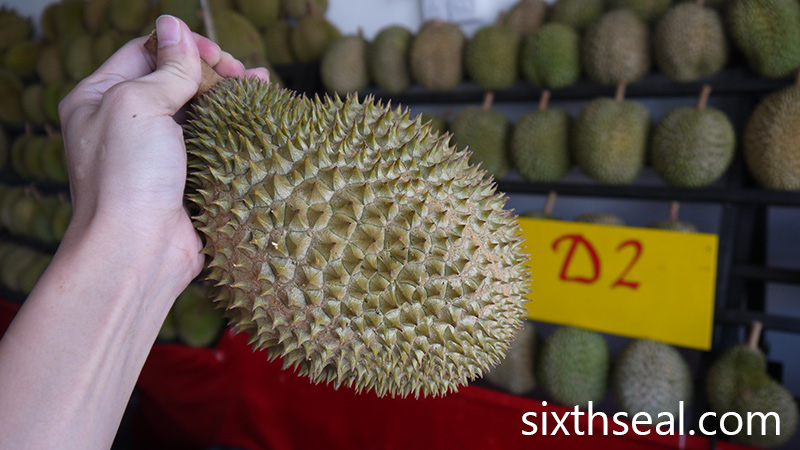 Cindy recommended their D2 Durian. This is commonly known as Dato’ Nina and she told me they just came from the orchard in Pahang today. I opened one to try and it blew me away. 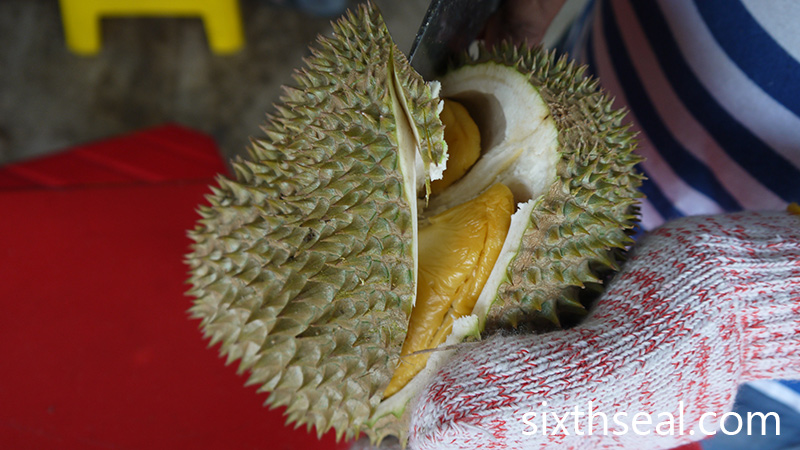 I was amazed! I instantly felt ecstatic when I tasted the D2 Durian – it’s like a drug! The combination of fat and sugar (which supposedly doesn’t exist in nature) elevated my mood so much I thought I had accidentally ingested a controlled substance.

The Dato Nina was rich, creamy bittersweet goodness and the fiber makes you chew and extract more flavor out of the flesh with every mouthful. 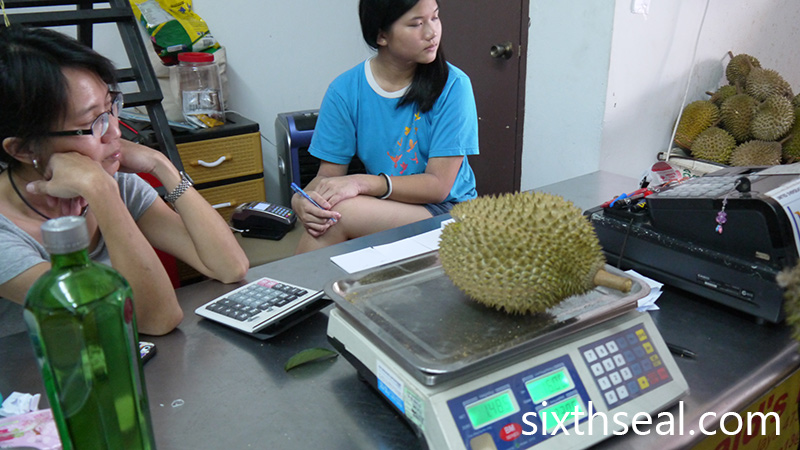 It was so good that I immediately got another D2 Durian coz I knew 1 would not be enough. 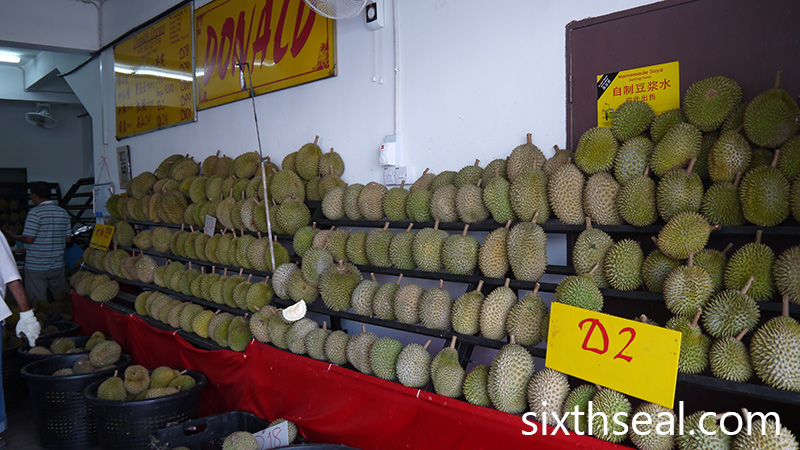 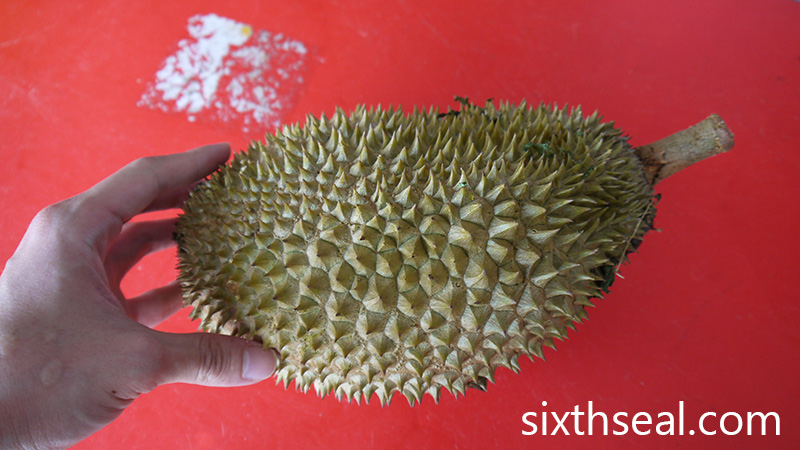 I’ve eaten so much fibreless durians this season (Musang King etc) that I’ve almost forgotten what a good fibrous durian can taste like. It can be even more flavorful since the fiber forces you to munch more and each time your molars masticate the durian flesh, the strong notes of D2 comes through with every bite. 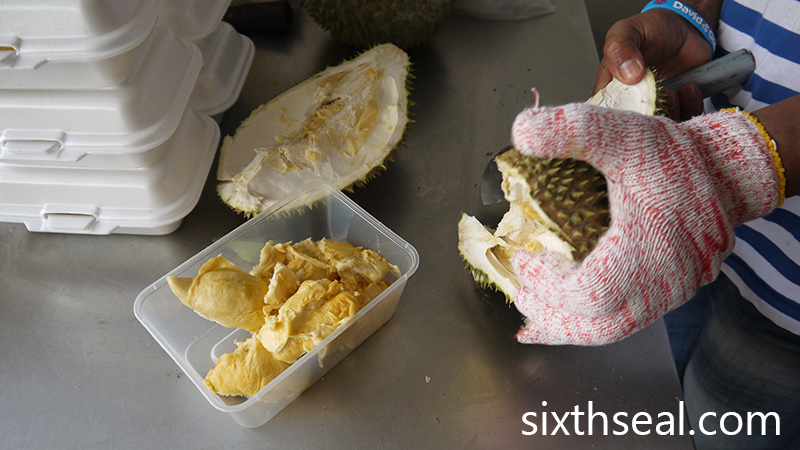 I can see why the more fibrous durians like D160 (Teka / Green Bamboo) has their own cult following. Dato Nina was one of the earliest registered clones (1934) and she’s not showing any signs of her age. It’s shaped like a kidney, very odd and distinctive so it’s quite easy to recognize. The D2 durian is also very, very hard to open unless you’re an expert. Even the staff had some problems and expended a lot of effort opening the two D2 durians I chose, but easily cracked open the D18. 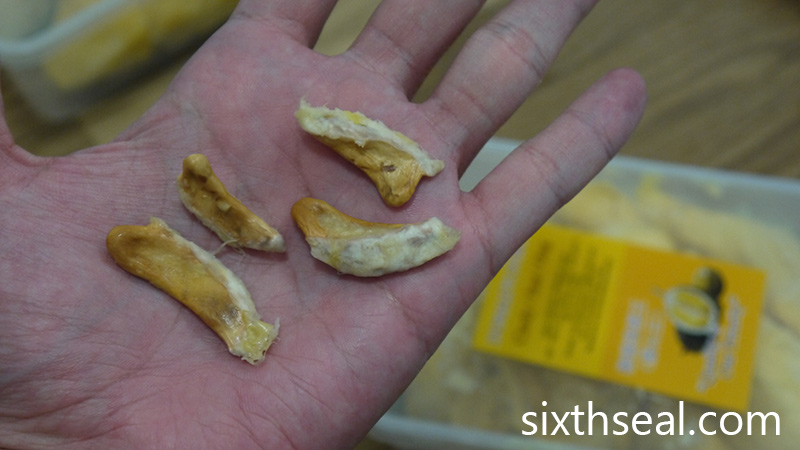 The D2 durian looks like a messy slop of pulp but nothing could be further from the truth. The seeds from this Dato Nina is shrunken and vestigial, which is why the durian flesh doesn’t “hold its shape” and flops around. You get a whole lot of flesh around a tiny and flat little finger sized seed. There’s also a larger shark teeth shaped seed, which can be found around 1/4 of the time, while the rest are tiny seeds or no seeds. It’s quite unusual. 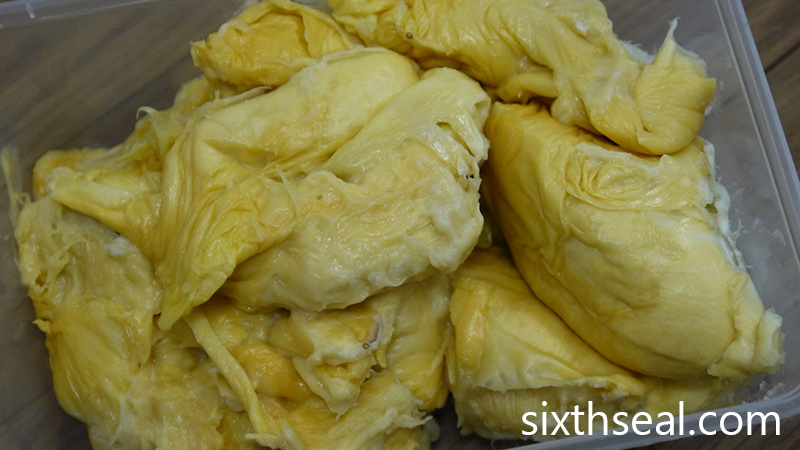 While I’ll normally wolf down durians, the D2 Durian forces you to ponder over it, to take your time and appreciate all the subtle and not-so-subtle nuances and savour every delicious mouthful. Just as I thought no more taste can be extracted anymore, another chew to attempt to get through the fibrous flesh proved me wrong and engulfed my palate with a deluge of more wonderful flavors and aromas from the Dato Nina. 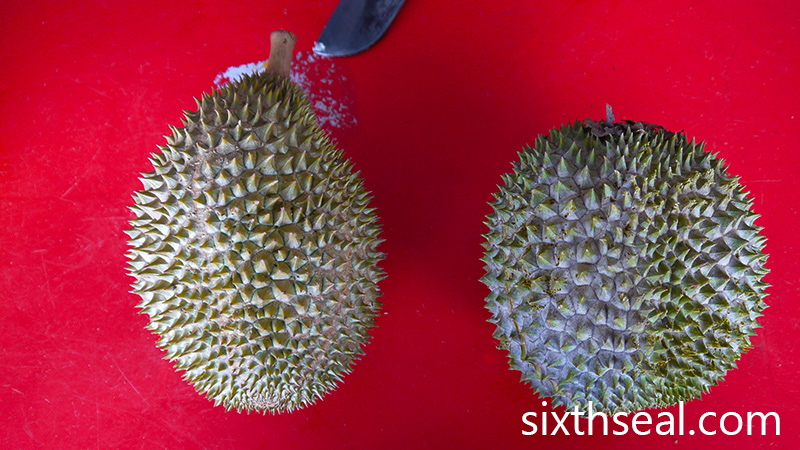 I’m converted – a good Dato Nina freshly fallen from the orchard can be better than most of the more famous branded durians. My better half didn’t like the fibrous nature so much though so YMMV. Personally, I’ll go back to Donald’s Durian again just to eat their wonderfully sourced D2 durians coz we finished the last of it a few hours ago.