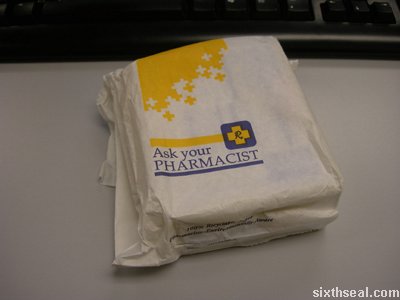 I just got a care package from a friend in Perth, Australia who sent it via an intermediately due to her distance. It’s Panafen Plus, a preparation of 200 mg ibuprofen and 12.8 mg codeine in a 48 caplet box. 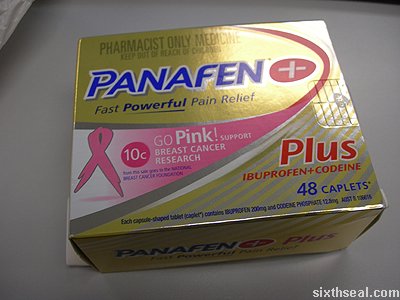 I took all of the 48 caplets for a heroic 614.4 mgs of codeine, just nice to put me into a good mood. Actually, I’m lying, I miscalculated and went OMFG after I used Calculator and found out that it was 600+ mgs of codeine instead of the 300+ mgs I calculated in my head. I’m still going to sit it out anyway. :p 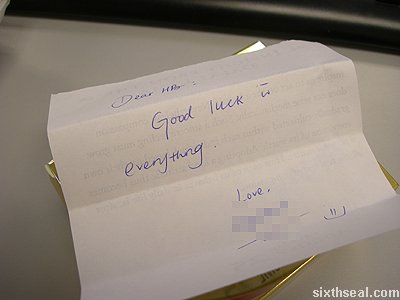 The Panafen Plus came with a note from my friend in Perth who wrote it in her handwriting. I haven’t received handwritten notes in a long time. 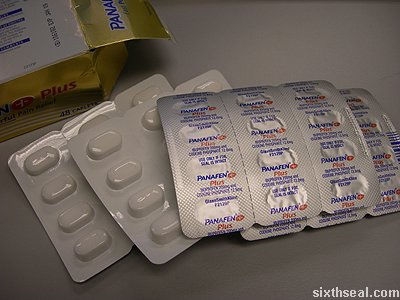 This is what the Panafen Plus by GSK blister pack looks like. Inside are small easy-to-swallow caplets. 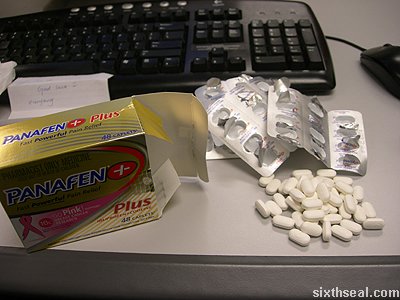 Down the hatch! That’s my codeine lunch. 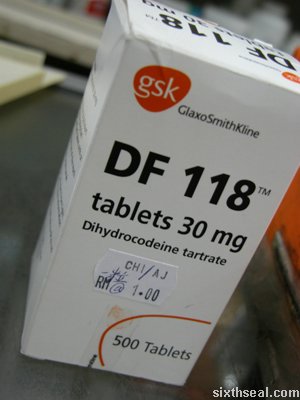 These beauties are manufactured by GSK (GlaxoSmithKline – the
pharmaceutical giant). DF 118, as it’s fondly referred to, have opiate
agonist properties, which makes it recreational. However, I am strongly against off label use. I bought a bottle off my pharmacy friend due to my…er, recurring migraines. 😉 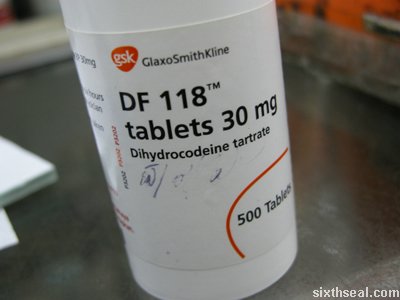 There are some people who prefer codeine over dihydrocodeine (DHC).
Personally, I find that DHC is qualitatively stronger on an mg to mg
comparison and it has a strange slight stimulant quality, which makes
it better than codeine, IMHO. 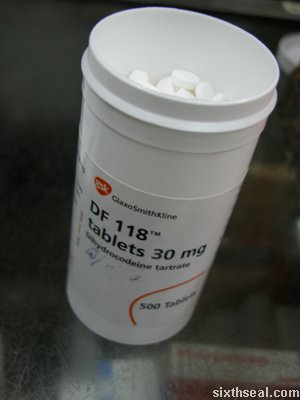 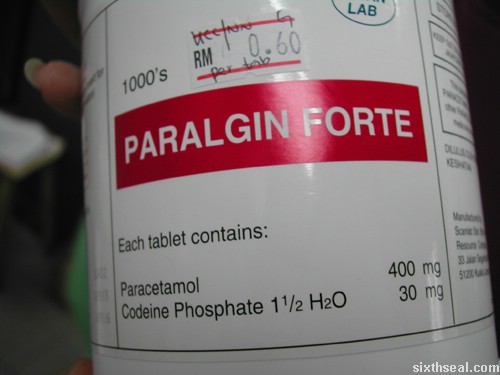 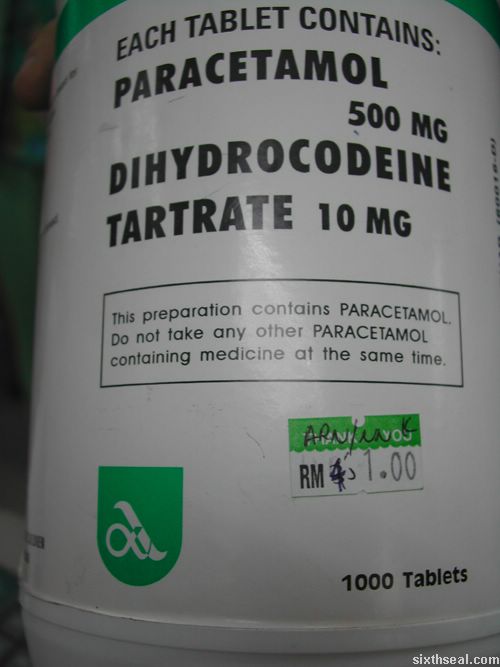 I woke up with a migraine yesterday morning, so I decided to call a
couple of pharmacies and see what they have. Pharmacy #1 only has
Panadeine, an obscene preparation containing 500 mg of
paracetamol/acetaminophen/APAP (they all refer to the same thing) plus
a decidedly meager 8 mg of codeine. Pharmacy #2 doesn’t sell any
restricted drugs, apparently codeine is “restricted drug” to them.
Pharmacy #3 sounds too good to be true – I called them and they said
they have two codeine preparations. The first one is Paralgin Forte and
when I asked about the exact concentrations, the answer nearly made me
drop the phone in surprise – 200 mg of paracetamol + 30 mg of codeine.
That sounds very nice indeed! =D Excuse me, I meant to say that it
sounds like that would do help with my migraine very well indeed. The
other one they have is an unknown tablet that contains 500 mg of liver
destroying paracetamol + 10 mg of dihydrocodeine. I told them I will be
down in an hours time. 🙂

My last option was the internet and found a 30 mg tablet of Dihydrocodeine at https://www.ukmeds.co.uk/dihydrocodeine which is used as an alternative to Codeine in the treatment of severe pain. 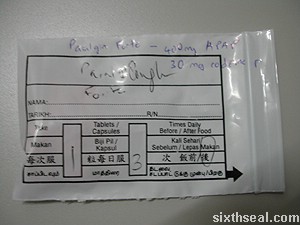 I had to write what that myself… 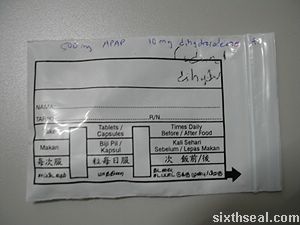 Well, I went there with my gf and Anna later and yes, it was too
good to be true. The Paralgin Forte contains 400 mg of paracetamol
instead of the 200 mg they told me over the phone. Nevertheless, 400 mg
is better than 500 mg, so I bought a couple of them. They go for 60
cents each, which about 30 cents Australian. Anyway, just so I won’t
have to convert all the time: 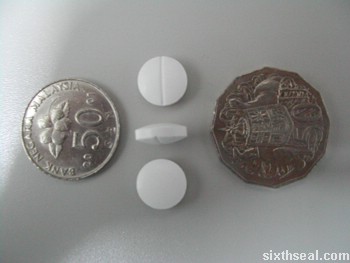 I bought 10 of the Paralgin Forte tablets for a nice 300 mg of
codeine. They cost 60 cents each, which I think is pretty cheap for a
tablet that has 30 mg of codeine. It is interesting to note that the
bottle says Codeine Phosphate 1 1/2 H20 – 30 mg. What’s with the 1 1/2
H20? Does it mean that codeine is soluble in 1 1/2 amounts of water or
does it mean something else? Pharmaceutical aficionados, I would appreciate it if you could shed some light here. 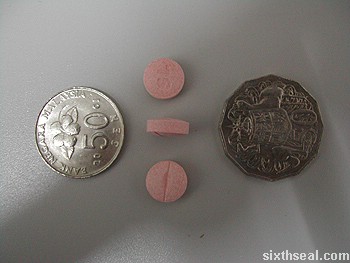 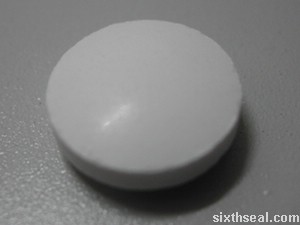 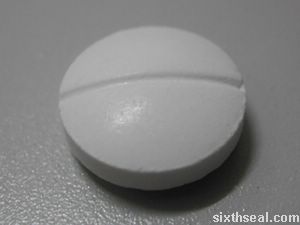 Anyway, the other one they have contains 500 mg of paracetamol and
the inferior dihydrocodeine tartrate, which I haven’t tried before.
There’s only 10 mg of dihydrocodeine to the whopping 500 mg of
paracetamol, so ah…I think I might need to get some coffee filters next
time I have a migraine and have some cold water handy. 😉

Well, the photographs of the photos are actually quite funny. I walked in, and this conversation ensued:

Me: Hello, I called just now regarding the migraine tablets?
Pharmacist: Oh yeah, I remember, let me just get the bottles.
She comes out with two large bottles, each containing 1000 tablets – nice…
I examined the bottles for a while and asked for 10 Paralgin Forte
tablets (60 cents each so that makes it RM 6) and 16 dihydrocodeine
tablets (RM 1 for 4 pills, so that makes it 16 pills to round the total
up to RM 10).
Me: This is going to sound like a strange request, but do you mind if I take a photo of the bottles before you put them away?
Pharmacist: That is indeed the strangest thing I’ve ever heard!
I’ve never had a customer make that request before. Why do you want
photos of the bottles?
Me: Well, I have a personal interest in these things.
This is the truth, but it’s the “wrong answer” when doing pharmacy
runs/doctor shopping. Sometimes, being economical with the truth is the
better policy as you can see below.
Pharmacist: *looks doubtful* Okay, I guess that wouldn’t do any harm, so go ahead.
I take photos of both the bottles.
Me: Hey thanks, I really appreciate you going out of your way to help me out.
Pharmacist: No problems…can I ask you a question? Are you taking them yourself?
Me: I am aware of the abuse potential of these things, I would only take them if I have a really bad migraine.
Pharmacist: That’s good to hear. You know, this is actually a
prescription item, so I’m not actually supposed to sell it to you
without one.
Me: I see. I appreciate that you would go out of your way to help me, I hope this doesn’t get you into any trouble.
Pharmacist: Nah, it’ll be alright, but it’ll be better if you
have a prescription before coming in next time. You can have these
today though.
Me: Thanks again, I appreciate your help. You have a nice day okay? Take care.
Pharmacist: Have a nice day.

I reckon it was that interest in taking photos of the bottle that
made that “SCRIPTER!!! SCRIPTER!!!” flashing light go off on my head. I
wasn’t scripting, I really did have a migraine, but yeah, add this bit
to the Tome of Doctor Shopping – don’t appear too interested in the
medications you’re trying to acquire. It’s normal to ask about side
effects etc but it’s not to start breaking out with the digicams and
asking permission to take photos of bottles inside a pharmacy, all the
while focusing on the 30 mg codeine part. Take care everyone. 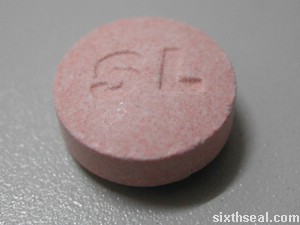 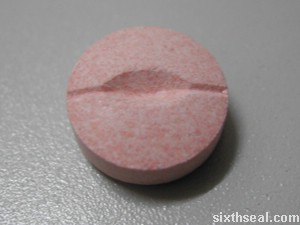 P/S – SWIM consumed 4 tablets for a total of 120 mg codeine and
1,600 mg paracetamol (yuck), with benzodiazepines and had a very
positive experience, although the most common side effect (not itching,
the other one) was very strong. That person says that he only truly
appreciated codeine this time, and actually nodded off (he does not
have opiate tolerance at all) for a very pleasant experience, except
for the side effects. He might be writing a trip report in the near
future. Please do not mix benzodiazepines and codeine, that person had
a very responsible trip sitter. 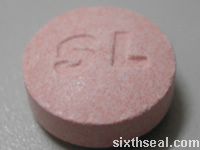 Here’s a teaser photo. I was about to post about my acquisition of
this tablet today (uh, for my *cough* migraines you see) – it weights
in at a decidedly hefty 30 mg of codeine per pill, but I am really too
sleepy now. I promise the report will be up tomorrow, with plenty of
pictures (even the ones taken at the pharmacy, hehe! that lead to funny
conversation), so if you’re interested in things like this, come back
tomorrow codeine fans! 🙂 I got two kinds, one with 400 mg APAP + a
nice 30 mg codeine and another with the usual obscene 500 mg APAP + a
meagre 10 mg of dihydrocodeine tartate (just for fun), and I’ll write
about that tomorrow. Disclaimer: I don’t mean I bought the
tablets for fun, I just mean I’ve never had dihydrocodeine before so
that’s why I got them as well. Nevertheless, I’ll post the report
tomorrow (not the trip report, the pharmacy run report – the trip
report will be up next time I…uh, have a migraine). Thanks and good
nite! 🙂

If you’re involved in any drugs, you have GOT to read this…very,
very insightful article about dealing with the police. Er…the police
here does practise physical assult, the report was written in the US
but please read it if you have a love of chemical substances, it could
help you if you’re busted.

oopz, can you email me ASAP? I lost your email address during the hard disk crash. Thanks buddy!

Such exquisite beauty in such a simple function.
/me rubs tears of joy from eyes
Hmm…solving a coding problem that’s been bugging you for a long time
is very much like having a big fat line of coke. Not that I would know
of course.