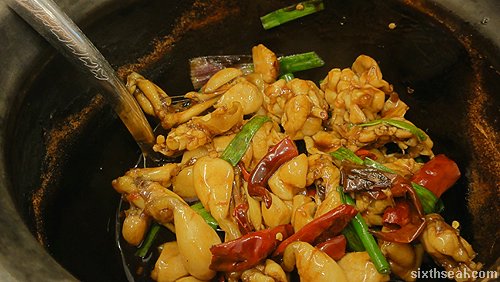 Yes, this is a branch of the renowned Singaporean frog leg porridge located in the more dubious part of the island. I’ve had the pleasure of eating at the original Geylang Lorong 9 frog leg porridge in Singapore and have been known to drop by their branch in Petaling Jaya a couple of times and I’ve always found that they cook up a consistently good frog leg dish. 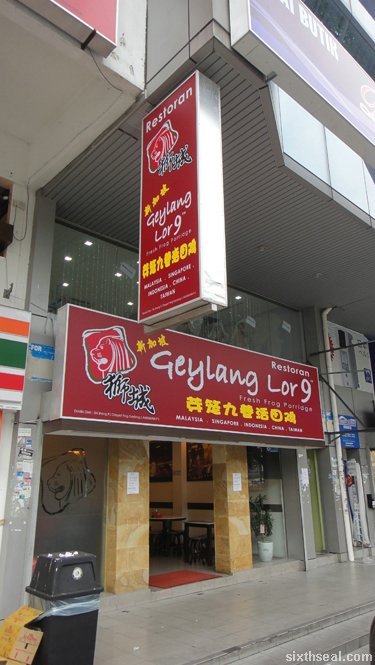 I went there for a late lunch yesterday and ordered the medium kung pow frog leg claypot (RM 24). You don’t have to eat porridge if you don’t want to – there’s an option for rice as well, which we both went for. However, it should be noted that the awesome kung pow sauce goes better with porridge. 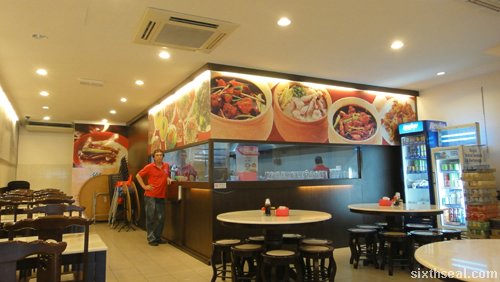 Anyway, I was telling Bonnie about how producers sell food at a higher price to supermarkets compared to restaurants coz the former needs to display their goods while the latter don’t. I remember watching a documentary where a restaurant owner was interviewed saying how supermarkets require better looking food items coz for display while restaurants can get away with the odd ones, since most of the cooking is done without the customer seeing it, but for the life of me I can’t remember exactly where I saw that show.

She sat there listening patiently until it dawned on me…it was actually her reporting assignment that I was watching a couple of days ago and that’s where I heard that fact. -_- 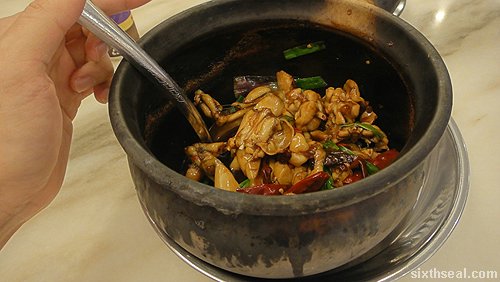 The Geylang Lor 9 Fresh Frog Porridge name is a bit of a misnomer since they don’t just serve the frog legs but the entire frog. It tastes really good though – frog meat is exquisitely tender and juicy – it’s like a cross between a fish and a chicken thigh. 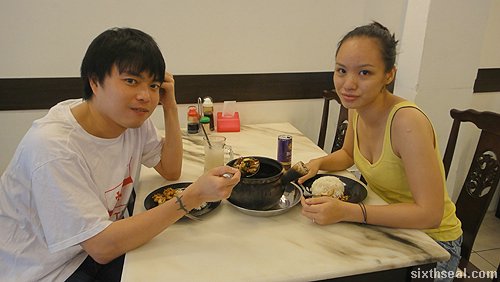 I still prefer the original Singapore one though. I know they import their frog meat from Malaysia but it still tastes better to me. I suspect it’s the way they cook it – the flagship Singaporean Geylang Lorong 9 porridge place just has better claypot kung fu. 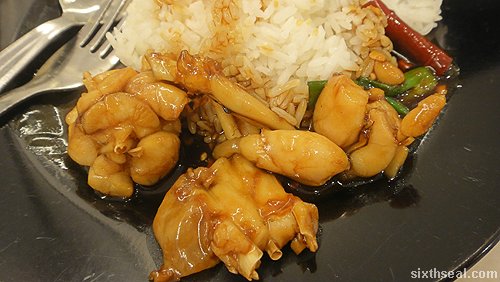 Order the fresh barley if you can’t take spicy food – their kung pow frog leg can be pretty intense. 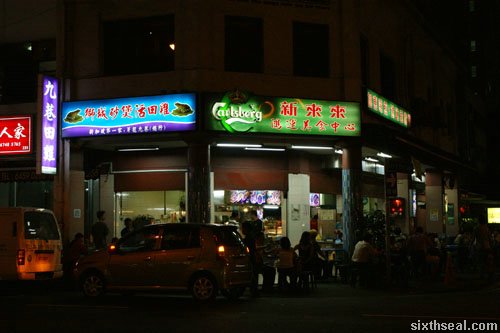 Okay, a lot of people have been giving me a hard time about heading down to Geylang in Singapore but I didn’t go there to indulge in the pleasures of the flesh. Oh wait, I did! However, it was frog flesh rather than the Homo sapiens variety. I went there for the famous frog leg porridge. =D 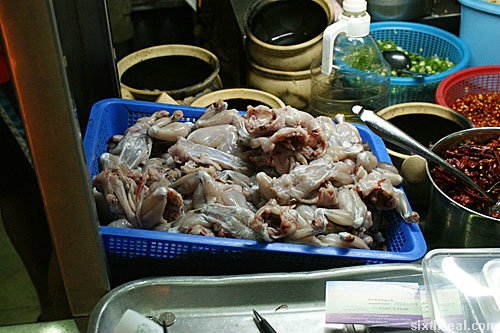 The frog leg porridge is at Lorong 9 in Geylang. You can’t miss it. There are pictures of frogs right on the signboard. I’m not a big fan of porridge so I was rather dubious about this, but I like frog legs, it’s the best invention creation evolution since sliced bread. The Chinese calls it tien chi which means “field chicken” – a euphemism if you will. 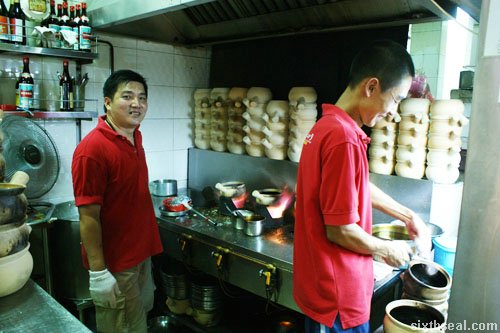 The Lorong 9 Geylang frog leg porridge is the most renowned one in Singapore. I had a bit of a chat with the proprietor and he told me that the frogs are actually from Malaysia since they don’t have frog breeding farms in Singapore. 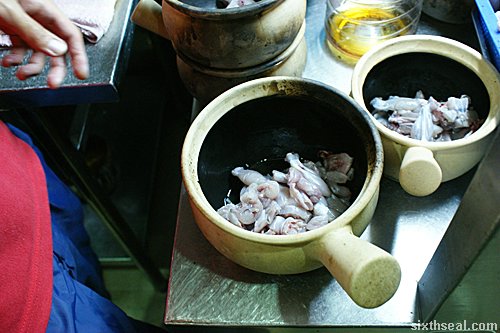 He also enquired whether it’s my first time eating here, to which I replied in the affirmative. He recommended the Dried Chilli Frog Leg Porridge. It costs SGD 10 for the entire meal (about RM 25 or so) and comes with a bowl of steaming hot porridge seasoned with freshly chopped spring onions and a claypot serving of frog legs cooked with dried chillies (kung pow style). 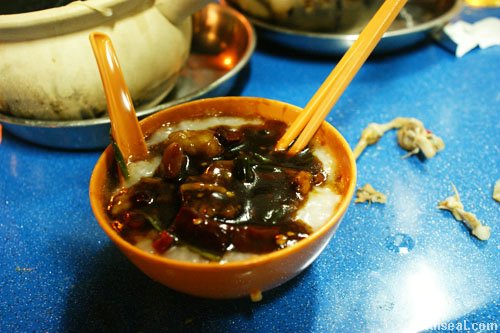 This is actually a fucking good cooking method since the chillies do not overpower the frog legs but adds that elusive zing to the porridge. Congee, as we all know, is rather bland by nature. 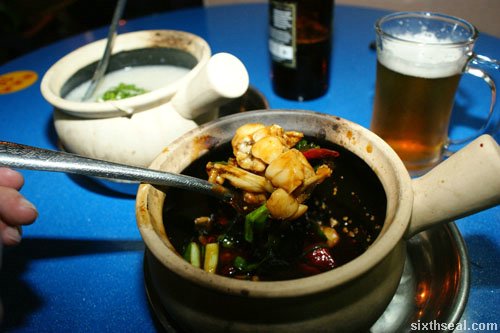 I don’t even like congee, but to my surprise I ended up eating the entire bowl. The dried chilli cooking method produces a lot of mouth-wateringly spicy gravy for the porridge. I planned to just eat the frog legs with a bit of congee but I whacked the entire pot. 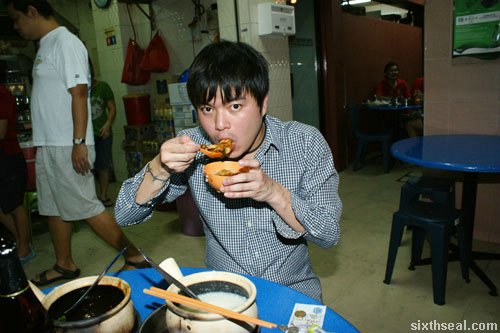 Mmm…frog legs – it tastes like very tender chicken with the texture of fish. The sweet and succulent frog legs, the appetite inducing dry chilli, and the spring onion infused congee are hallmarks of what makes this a truly intense porridge experience. 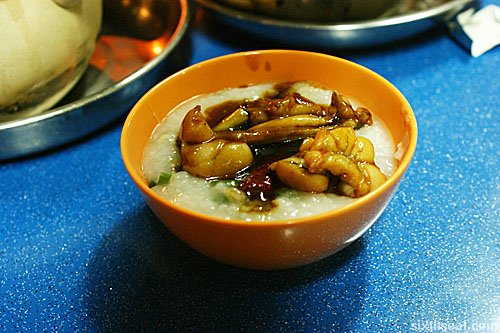 Lorong 9 Geylang frog porridge gets the thumbs up from me. Just don’t linger around the area; you may come across establishments which your mom would frown upon. 😉 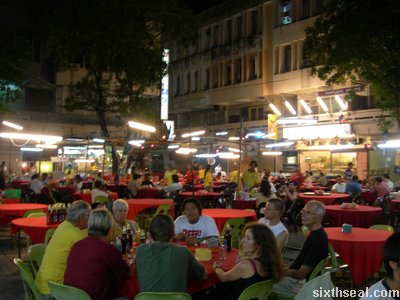 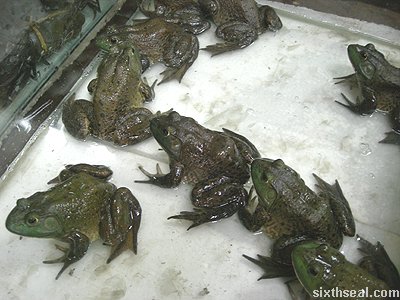 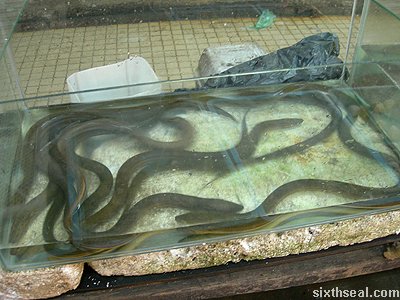 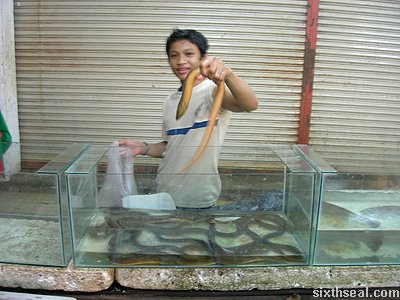 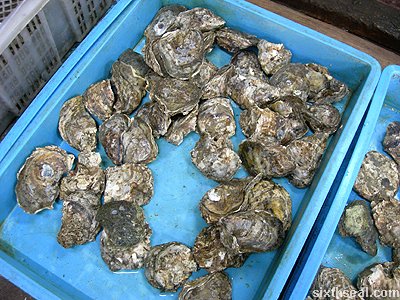 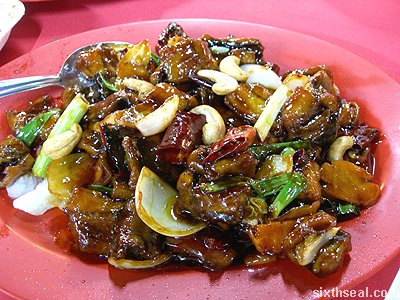 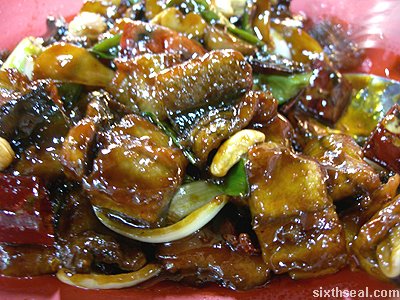 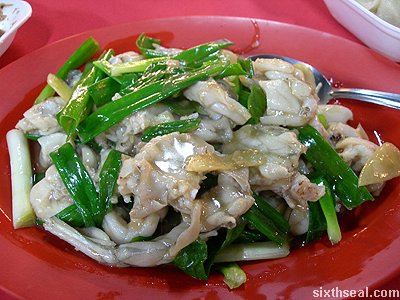 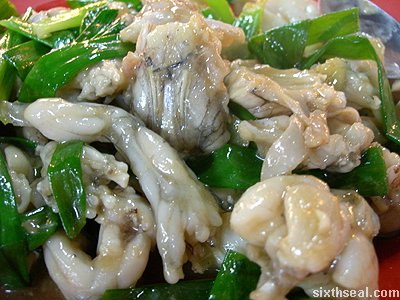