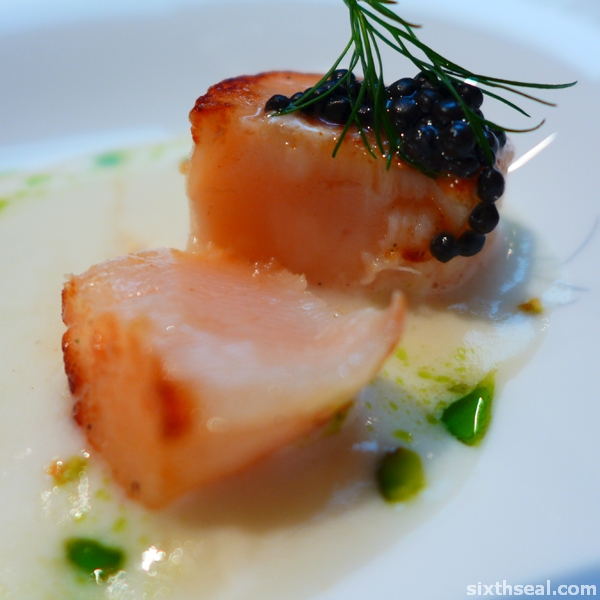 Senja is an Italian restaurant despite it’s Malay sounding name. The food is prepared by Chef Filippo Giunta, a friendly Sicilian which I got to meet later. It is best known for it’s homemade pasta and pizzas (they even have a firewood oven) and the ambiance – it’s built on stilts above a man-made lake and the view is quite pleasing. 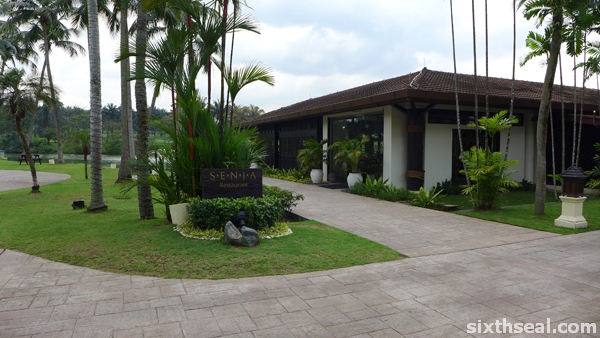 I was there to check out their Christmas Eve Dinner. I haven’t been here for a while and I thought I’ll come and check out their new pasta machine. Thanks for the invite Azimy and Azirah and it’s a pleasure to meet you Karen! 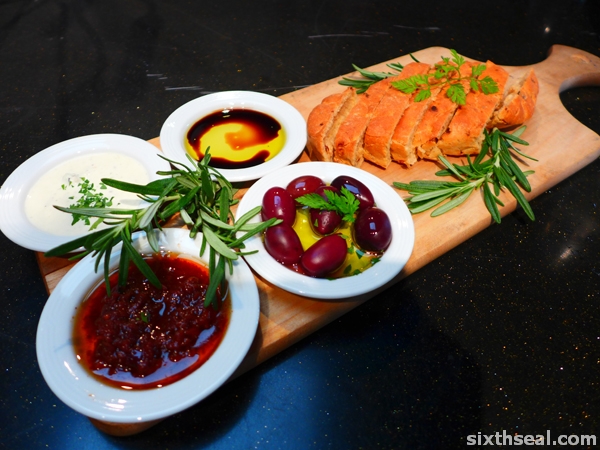 The five course meal was preceded by their wonderful home-made bread, which I absolutely loved. It came with four different types of dip – the whole olives and sun-dried tomatoes being two of my favorite. 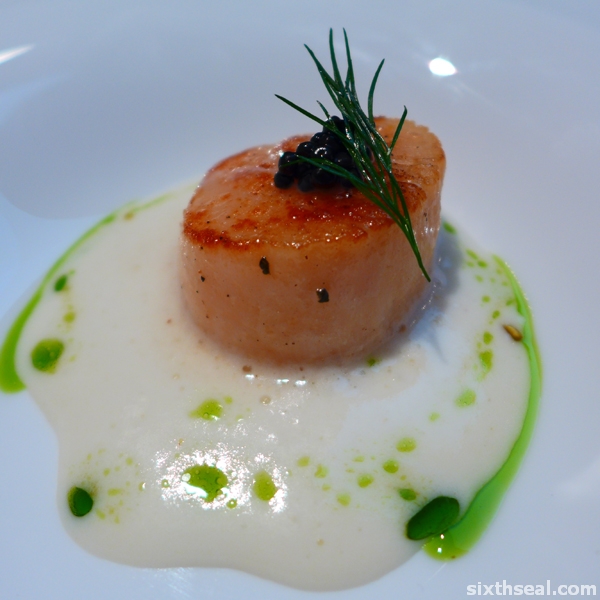 This is the first course proper – the amouse-bouche. It’s a nicely cooked piece of scallop topped with black caviar with potato mousse and dill oil. I thought it’s a nice start for the Christmas Eve course. 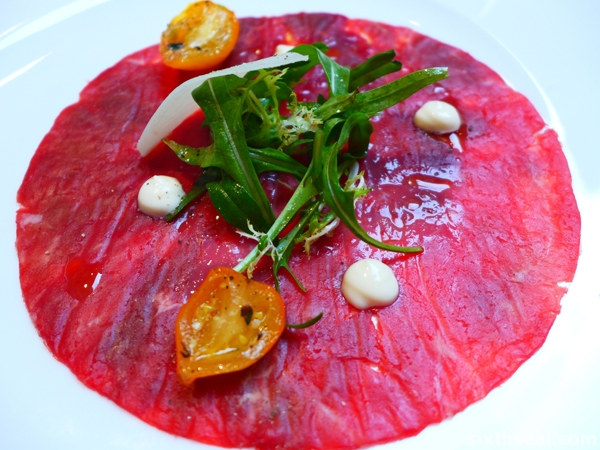 I really, really liked this. The circular tissue-thin Black Angus is aged well so you can taste the intense flavors in this apt appetizer. I wish I could have more of this. Perfectly dry-aged (I think, forgot to ask) beef. 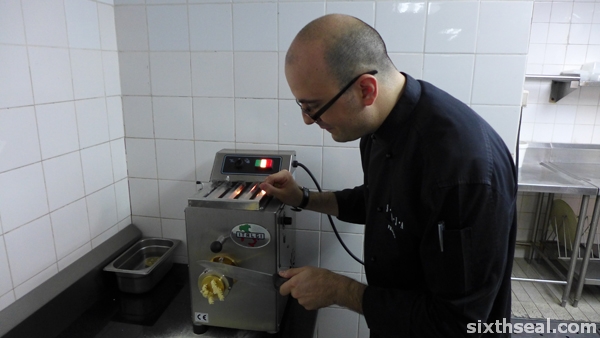 There are three main courses you can choose from: 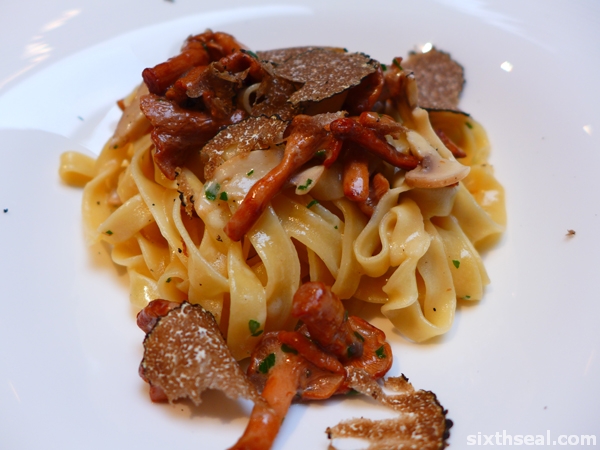 This would be my recommendation for the main course if you’re not one of those people who must have turkey on Christmas Eve. I’ve seen how they make their pasta in-house and the linguine is cooked to perfection – dictionary definition of “al dente”. I enjoyed the simplicity of the dish, spruced up by generous shavings of black truffle. 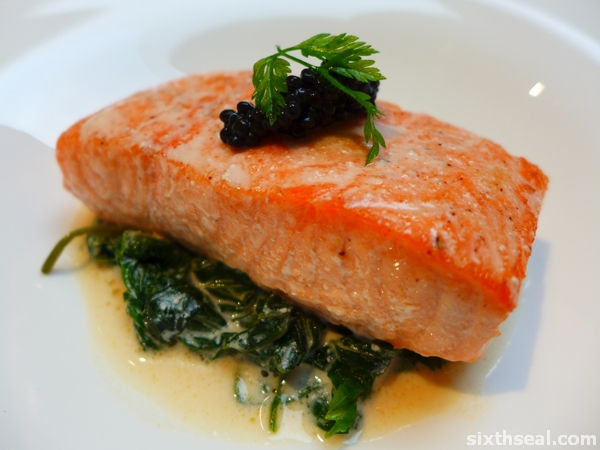 There’s nothing wrong with this dish, but it didn’t quite hit the spot for me. It’s a generous slice of salmon on top of spinach and it was the first main dish that I ate but I felt that the salmon overpowered all the other flavors in the dish and it was a tad overcooked but then again I won’t pretend to be a food critic. Heh. I just felt that the other two dishes were much better. 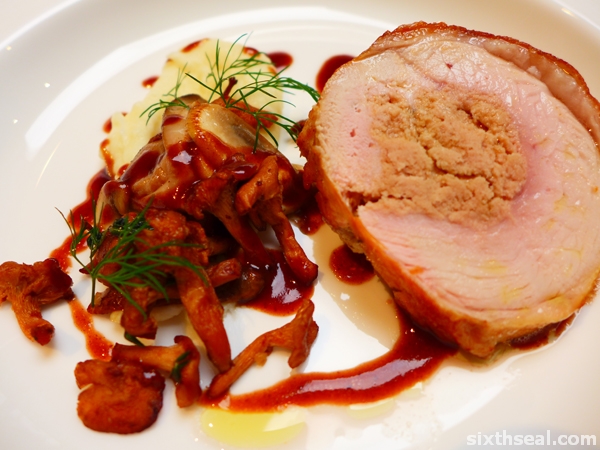 I really liked the crisp turkey skin and the juicy turkey meat. I loved the stuffing. It’s a classic Christmas dish that has everything done right including the apple cubes beneath the turkey that gives it a sweet dimension. Highly recommended, I would go for this or the pasta for the main course. Come to think of it, I’ll recommend this, coz you can have pasta any other time. 😉 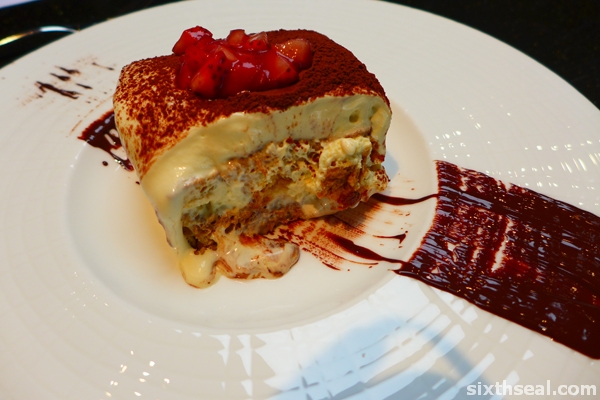 This is hands down the best dessert I’ve had this month, or maybe even this quarter. I might even hazard to go “this year” due to this wonderful creation from Chef Filippo Giunta. It’s not a regular tiramisu made with Savoiardi – that has been made passé with this “tiramisu” made from Panettone. Just think of Savoiardi being substituted with Panettone Antica Ricetta and you’ll have an inkling of what this marvelous dessert tastes like.

It’s awesome – there’s no other word to describe it. The Mascarpone and coffee cream dominates the Panettone that has been rendered soft and yielding and the burst of fruitcake combined with the thick, cloying cream resulted in a truly fearsome dessert. It’s delicious! 😀 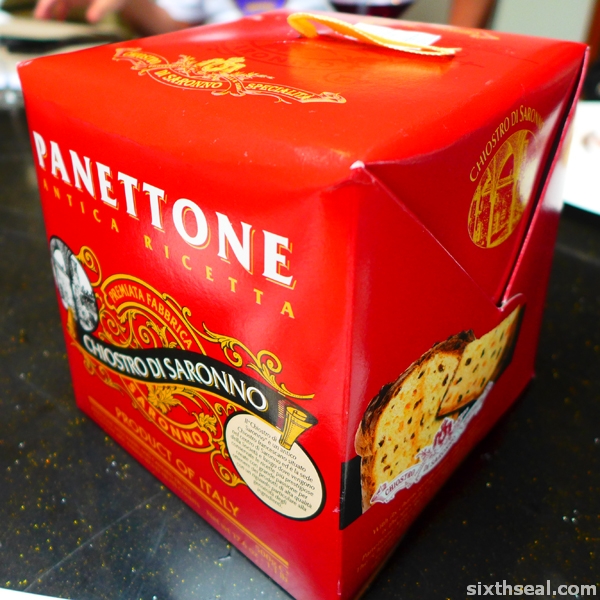 This is the Panettone used for the Christmas Eve Dinner dessert at Senja. It’s the specialty Christmas cake of Milan which traces its roots to an ancient Franciscan cloister in Saronno. It’s orgasmic – there’s a bit of fruitcake to remind you of the festive season and I was very impressed by this dessert. The Mascarpone and coffee cream slathered on top of this Panettone “tiramisu” takes the cake (haha). I’ll go just for this dessert again! 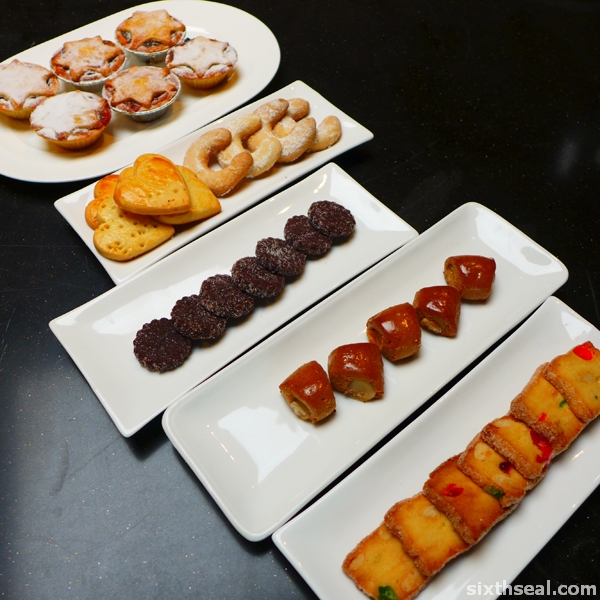 We also had mince pies, biscuits and gingerbread cookies after the meal and I was so enamored by the Panettone “tiramisu” that Chef Filippo Giunta came out with what the dome-shaped Christmas cake. The Christmas Eve Dinner at Senja, Saujana Hotel is priced from RM 160++ to RM 280++ with optional wine pairing. 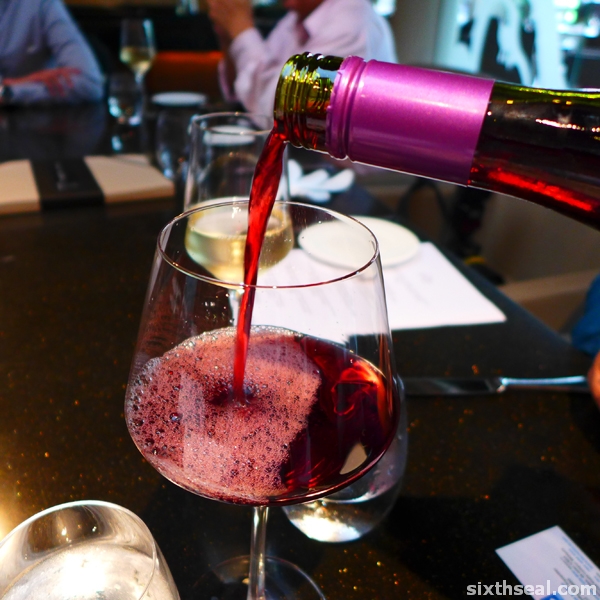 They also have a New Year’s Eve set dinner priced at the same range where you can watch fireworks by the lake. Senja Restaurant is also starting a new tradition of Christmas Day and New Year’s Day brunches with buffet style antipasto and desserts from RM 90++. They can be reached at 03 7843 1234 for reservations. Oh, and they also sell that Panettone cake by itself but it won’t nearly be as good as the one made into “tiramisu”. Heh.