Here at sixthseal.com it has been established – a heritage even – that we go above and beyond the call of duty. 😉 These are my Kame Hame Ha videos for the DBZ: Evolution screening. I tried a couple of flammables: 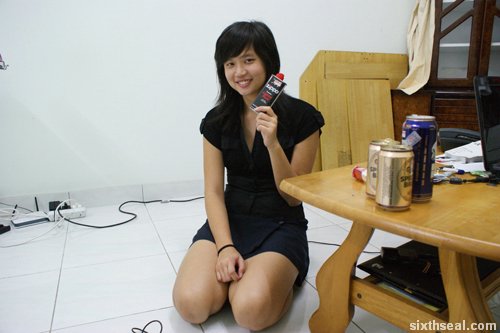 This is Zippo lighter fluid, otherwise known as naphtha. It doesn’t burn at all. I found that rather strange, considering I spent RM 6.90 on it. I guess it just evaporates on concrete once it’s been poured out of the receptacle.

…with this Dragonball…I’ll take my vengeance – upon the Earth.

It’s all reverse messed up chronological videos in this post – the first one is the naphtha fluid, which is a massive FAIL since it didn’t ignite.

I promptly used methanol spirits (don’t ask me why I have a spare bottle in my car coz I can’t answer that) and it came up as a blue flame.

We adjourned for dinner and I decided I wasn’t satisfied with the results so I got RON 92 gasoline from the nearest petrol station. I told the attendant my friend ran out of gas in SS 6 and I needed 1.5 liters of the Good Stuff (TM). I don’t think he quite believed me coz he told me if I was gonna Molotov Cocktail a house, I was not to say that I got it from that particular gas station. LOL! 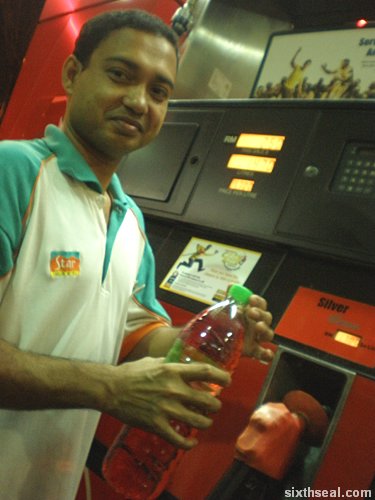 We went back and did it for a third time with RON 92 gasoline and that’s the first video. It’s awesome! =D

Thanks to Hitomi for helping me get the videos done! 🙂 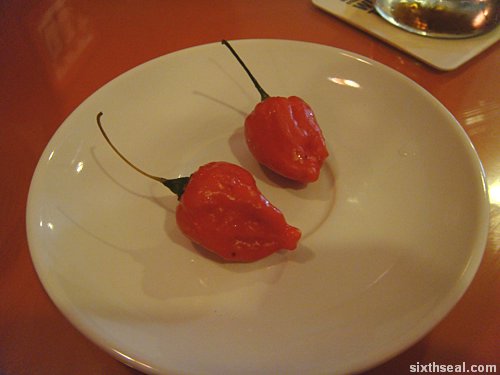 Jesus Christ, I must admit, the chili started stinging at the 2 minute point and peaked at the 3 minute point. My eyes were watering and my nose was running. 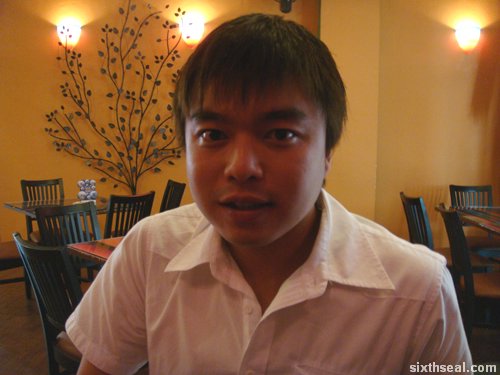 I felt a little queasy after that and my taste buds were desensitized for about 15 minutes, but it was fun, and I would do it again. Take the Habanero chili challenge @ Frontera!

I remember having a batch of fireworks from the previous Chinese New Year and decided to give my girlfriend a surprise at 12 midnight last night (technically, today). I carried the firework cake configuration to her house with my car lights dimmed and called her to come out for a while. I had planned to deploy the fireworks just opposite the road outside the house – a hit and run affair, since fireworks are not exactly legal in Malaysia. 😉

This is “Universal Battle” a cake configuration of 13 shots (which is not an inauspicious number for the Chinese, unlike the Caucasians) and I drove over to her place with it on my passenger seat and dimmed my car lights when I got to her place before coming out with the fireworks and a lighter.

She was already standing outside when I lit the fuse and was quite puzzled by my “Shh…” motions and gestures to ask her to stay put and wait:

This is the fireworks surprise to cheer Melody up, which didn’t go exactly as planned…but she still enjoyed it. Happy half-weeksary after monthsary, dear! =D

I could have pulled off the fireworks stunt a little bit better with proper planning. The place was a residential area and letting off (loud) fireworks at night led to a barking spree by all the dogs in the area which woke up just about everyone in the place.

I should think everything through at least three times due to my impulsive nature and stop doing anything while inebriated since it’ll probably not turn out to be the way I expected it to be.

I had prepared a text message saying “Surprise! I love you dear. Hope you enjoyed the display.”, but in hindsight it probably left a bad impression, despite the Hari Raya festive cheer since…well, letting off fireworks in the middle of the road of a residential house is not exactly the kind of stuff parents root for. 😉

She had the remote so it would have been much better if I had let her in the car, went to a public park, let off the fireworks and gave her a quick hug and kiss before sending her back. It would have been much more meaningful (and tactful) since I wouldn’t have woken up the entire neighborhood. She would have enjoyed the display better in a private moment and it would still retain the Surprise Factor (TM).

Melody enjoyed the surprise, and that’s all that matters to me. Cheers all!