It’s times like these that I think there’s a higher power somewhere looking out for me.

It just so happened that I was back in my home town during my birthday (which coincides with Ching Ming) so I didn’t have much to do on Saturday night. I thought I’ll give a friend of mine a call and get some ketamine and treat myself to a nice k-hole for my birthday.

He didn’t pick up when I called him.

(I learned later this was a blessing in disguise)

Right after that, I went down and my dad asked me to pick someone up from the airport. That’s highly unusual, especially since he didn’t say who (my sister and her family had already gone back).

I pressed him for details and it turns out that my better half (whom I love to death) is coming to Sibu to celebrate my birthday with me. My dad had known since Tuesday (!!!) when she contacted him to arrange this surprise.

The phone rang right after he told me – it was my friend, calling back. He said he missed my call since he took his daughter out and asked me what was up. I said nothing much and hung up.

If you have skipped the beginning of this tale, this is the same friend whom I was about to arrange to get some ketamine for a personal birthday treat to myself.

What would have happened if my dear had arrived smack dab while I was in a dissociative state where I was thinking more about 4th and 10th dimensional beings and pondering the reality of our existence?

I’m kidding. That’s a heavily Photoshopped picture of salt (sodium hydrochloride) crystals packed in baggies to look like the real thing. It was pink Himalayan salt to boot, which had me adjusting all the contrast and levels and RGB details to make it look white and similar to ketamine crystals.

(either that, or I really digged out the real thing from my photo archives from years and years back

This is a highly elaborate running inside joke that I have with my dear, I seriously have quit all recreational substances, pharmaceuticals and anything that might even remotely alter my state of mind. No wink wink, nudge nudge stuff, this is for realz yo. I don’t even drink much anymore.

I love my dear to bits and she’s everything to me – I have always been true to her and haven’t touched anything mind-altering for almost three (3) years, ever since I have been with her. 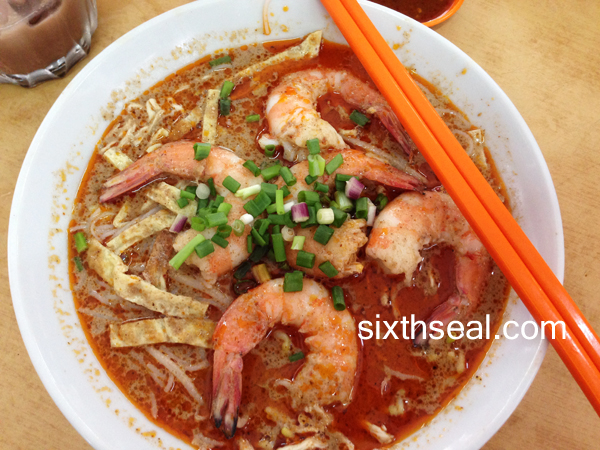 Me and my dad picked her up from her airport and we went to Aloha Cafe to eat her favorite Sarawak Laksa. 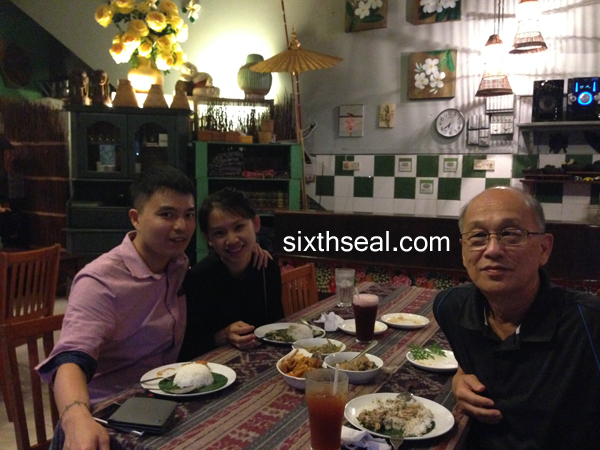 The three of us also had a very nice dinner at Payung Cafe at night. 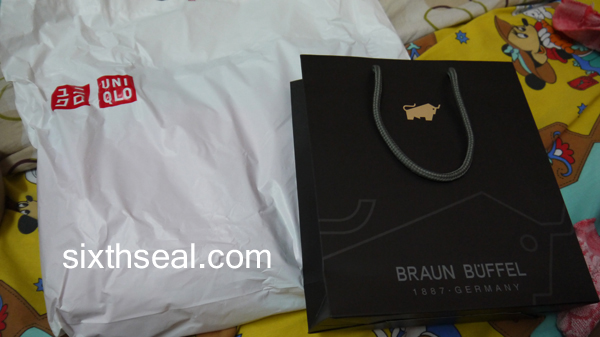 She came bearing gifts too – a Braun Buffel wallet and a UNIQLO shirt. 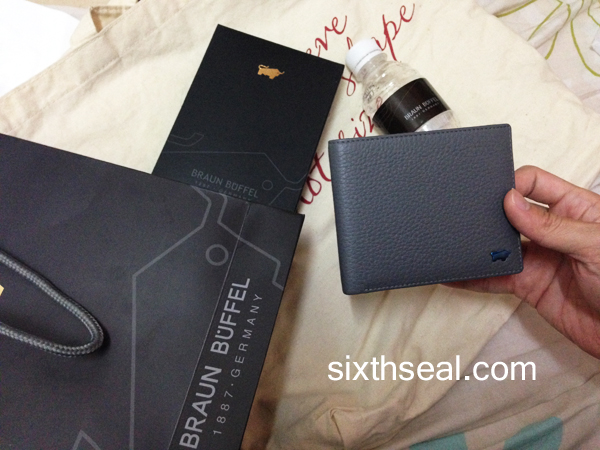 My wallet has been a sad specimen for a long time and I think she noticed that and got me a really expensive and nice grey one from the German premium leather designer. 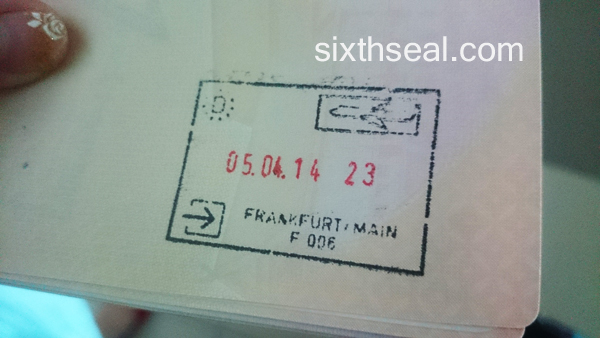 I love that she has a passport stamp of last year, when we flew to Germany and France – it’s dated 5th of April 2014, my birthday. 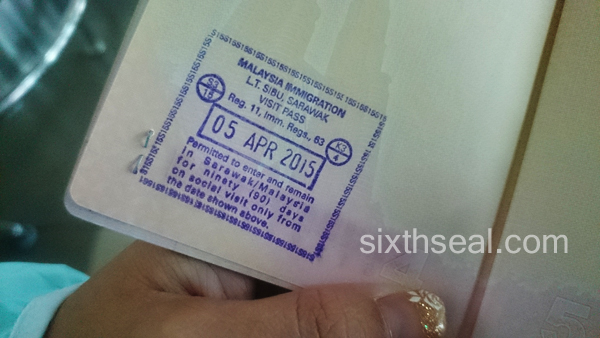 This year, she has a stamp on 5th of April 2015 but this time in Sibu. It’s small things like this that means a lot to her and a lot to me too coz it shows how much she cares that she spends every birthday with me (despite telling me she will not this year coz she’s busy with GST to make the surprise better).

I love you dear. I’m glad you flew down all the way to surprise me and planned it with my dad. Thanks for all the gifts and most of all for gracing my birthday with your presence, even if it was just one day. 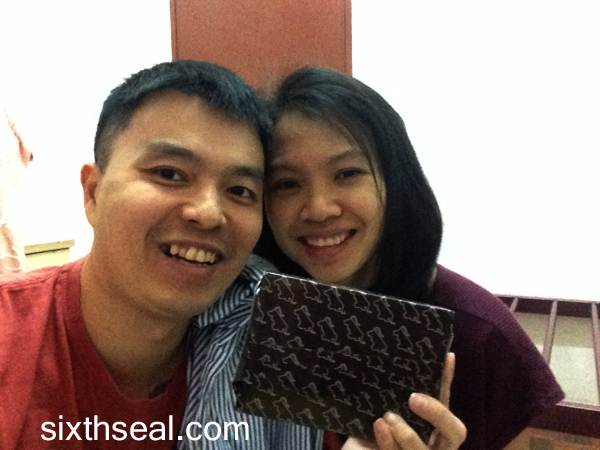 It’s the best birthday ever! You make my life better and you make me a better man by just being in it. <3

I remember having a batch of fireworks from the previous Chinese New Year and decided to give my girlfriend a surprise at 12 midnight last night (technically, today). I carried the firework cake configuration to her house with my car lights dimmed and called her to come out for a while. I had planned to deploy the fireworks just opposite the road outside the house – a hit and run affair, since fireworks are not exactly legal in Malaysia. 😉

This is “Universal Battle” a cake configuration of 13 shots (which is not an inauspicious number for the Chinese, unlike the Caucasians) and I drove over to her place with it on my passenger seat and dimmed my car lights when I got to her place before coming out with the fireworks and a lighter.

She was already standing outside when I lit the fuse and was quite puzzled by my “Shh…” motions and gestures to ask her to stay put and wait:

This is the fireworks surprise to cheer Melody up, which didn’t go exactly as planned…but she still enjoyed it. Happy half-weeksary after monthsary, dear! =D

I could have pulled off the fireworks stunt a little bit better with proper planning. The place was a residential area and letting off (loud) fireworks at night led to a barking spree by all the dogs in the area which woke up just about everyone in the place.

I should think everything through at least three times due to my impulsive nature and stop doing anything while inebriated since it’ll probably not turn out to be the way I expected it to be.

I had prepared a text message saying “Surprise! I love you dear. Hope you enjoyed the display.”, but in hindsight it probably left a bad impression, despite the Hari Raya festive cheer since…well, letting off fireworks in the middle of the road of a residential house is not exactly the kind of stuff parents root for. 😉

She had the remote so it would have been much better if I had let her in the car, went to a public park, let off the fireworks and gave her a quick hug and kiss before sending her back. It would have been much more meaningful (and tactful) since I wouldn’t have woken up the entire neighborhood. She would have enjoyed the display better in a private moment and it would still retain the Surprise Factor (TM).

Melody enjoyed the surprise, and that’s all that matters to me. Cheers all!