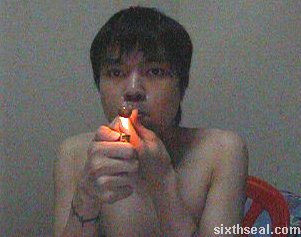 This is a video of veritas smoking methamphetamine in his room at
the tail end of a 3 day meth run. He just doesn’t know when to stop. 😉
Anyway, this is actually the first time the video function of the Nikon
5700 is used. I was reading online manuals and set it up and recorded
this. Thus, this is the first video recorded with my digicam.

It’s actually just veritas making a fool of himself while smoking
meth in his KL room. It’s taken recently, slightly before the veritas
confession. He uses meth as a “work drug” – most of the better and
longer posts you see on sixthseal.com is powered by methamphetamine.
Oh, and I’ll write in the third person if I want to. :p There are two
reasons why I’m releasing this video (which I’m sure will catch me a
lot of grief):

1. It was already leaked to an individual, and I’ve always thought
that a leak on the net is a full leak so people might as well download
it from the authorative site – sixthseal.com!

2. I want to stress test my VPS before I migrate. We’ll see how well
it performs. Ping times are okay and so is tracert, but I want a real
life situation to see how my VPS handles the traffic sixthseal.com
generates.

Anyway, the soundtrack is a feng tau track that I really love, it’s
not put in post-production, no post production was done on this video –
it’s the raw capture, since I don’t have any video editing software.
The music was on from my headphones while this was taken. This is the
actual first video record of my digicam. 🙂

Oh, and the About me page is updated with recent info.

Well, I won’t be posting tomorrow and I have to be off soon, so
enjoy the video of veritas being silly and here’s my harm reduction
message: Methamphetamine use can cause people to act in a stupid and
socially unacceptable behavior so be careful. 😉 Have a nice weekend
everyone, and if my VPS doesn’t die on me (please tell me if you have
problems downloading the video), then the migration will happen on
Monday.