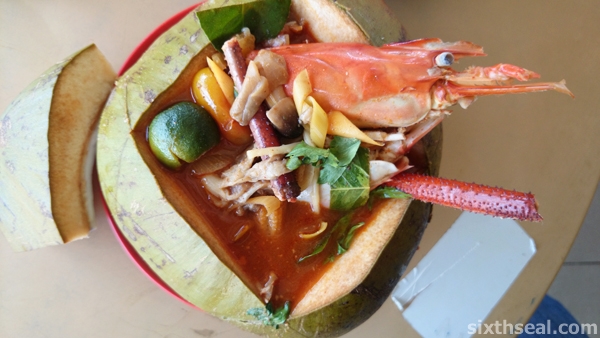 I’ve heard people telling me about this after I posted about the RM 33 big prawn noodles in a coconut available at Glory Cafe in Sarikei. Rowena and Alex both told me that Sibu itself has a version of this which they copied from Glory Cafe so I went to check it out with my dad yesterday. It’s located far inside the Ding Lik Kong industrial area near Igan River, which is about a 20 minute drive from Sibu town. 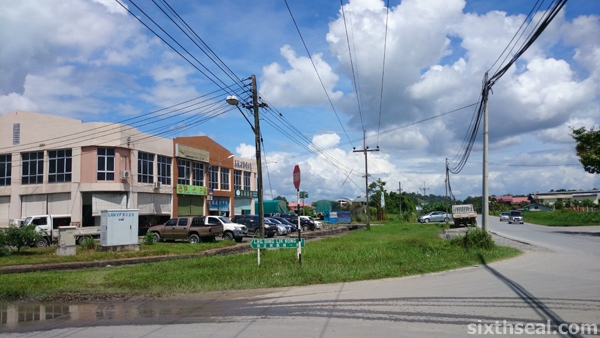 It’s actually quite easy to find, I just forgot about the place. My dad called my uncle and got us oriented and it was just a matter of following road signs after that. 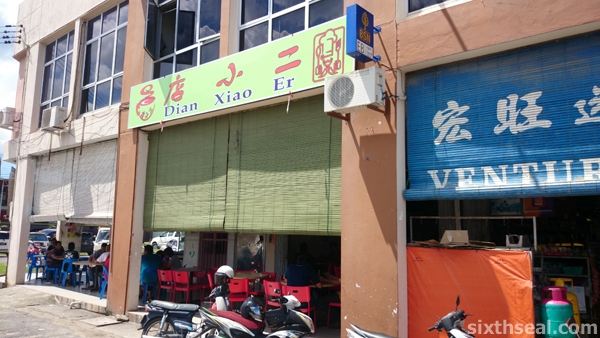 The name of the coffee shop is Dian Xiao Er and it’s located along a block of shophouses that has three (!!!) coffee shops – it’s the middle one and they have a large banner promoting their Coconut Tom Yam Big Head Prawn Noodles. 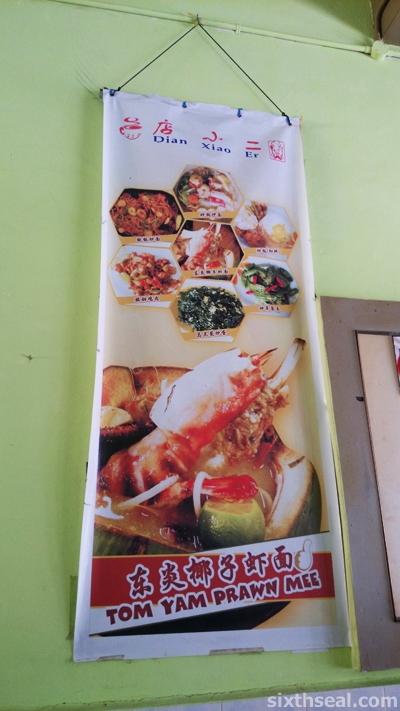 The guy taking our order was a very friendly and chatty young kid who seemed to take a liking to me. He told me that there’s at least 5 different places in Sibu that offers the same thing now – all duplicates of the original recipe from Glory Cafe. He also confided that he’ll be shifting work places at the end of the month and he personally did not think this was as good as the Sarikei version. 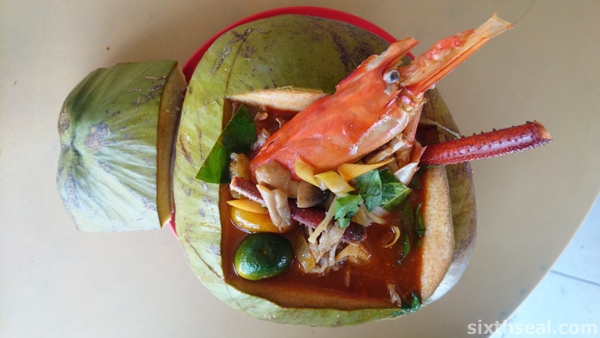 I was pleased to see that the big head prawn (大头虾) is indeed quite large with claws intact. 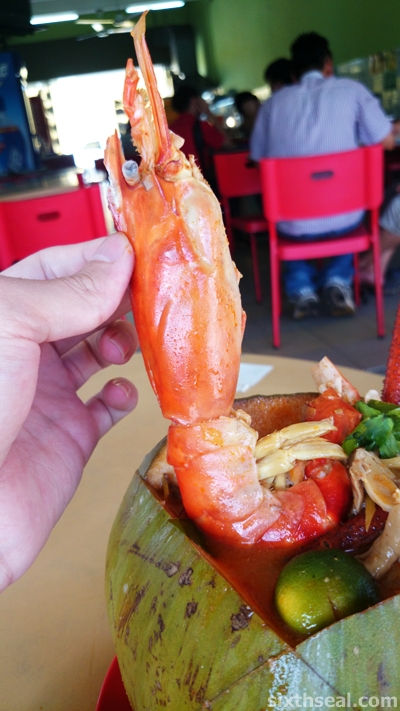 The big head prawn (Macrobrachium rosenbergii) is favored by Sarawakians due to the more intensely flavored meat. The other common type of prawn here is the big white prawn (Litopenaeus vannamei) which is milder. You can see the difference – the former really has a huge head in relation to the size of its body. If it were an inanimate object, I’ll compare it to a bobblehead or a chibi anime character. 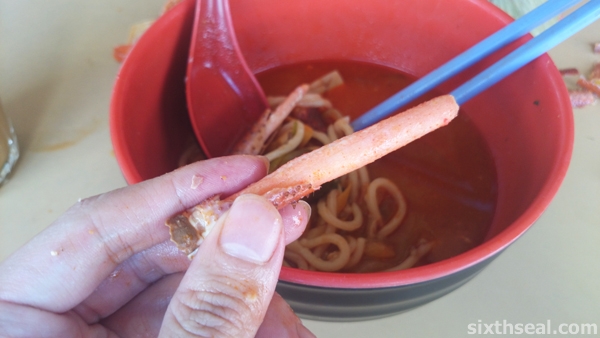 The claws are very important too as the meat from them is equivalent to a *2B pencil*! 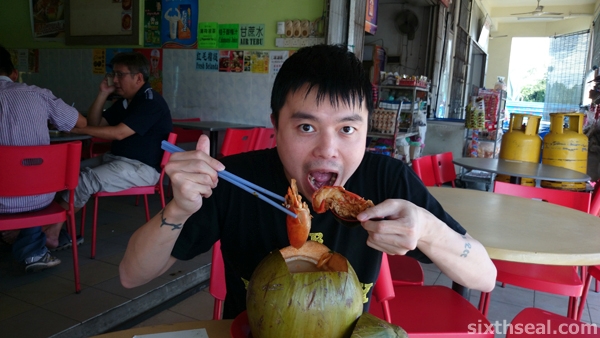 I had a taste of the tom yam soup and I thought it was quite similar to Glory Cafe except for five key differences: 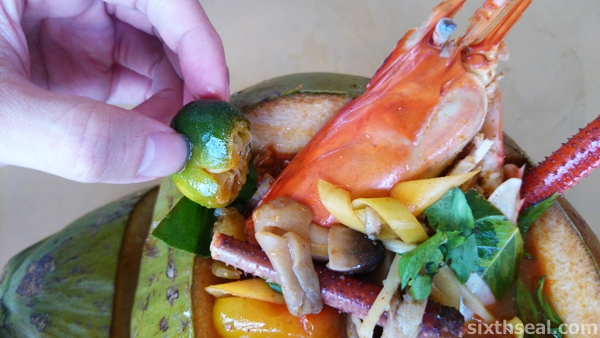 The uncooked calamasi lime is the obvious one as Glory Cafe in Sarikei has a very mushy lime that’s almost *disintegrating* compared to this relatively fresh specimen and that adds a lot to the tom yam flavor profile. 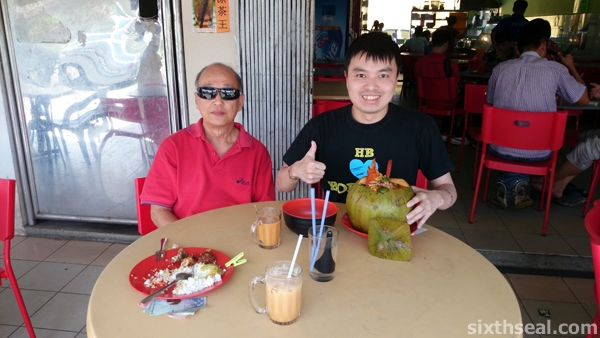 Nevertheless, I enjoyed my meal and it turns out to be cheaper than driving down to Sarikei for their RM 33 Tom Yam Coconut Big Prawn Noodles. It’s also better than the notorious RM 35 big head prawn noodles in Min Kwong. There are some problems with the recipe and it’s not exactly similar to the original one in Sarikei – anyone would be able to tell from a blind test taste. 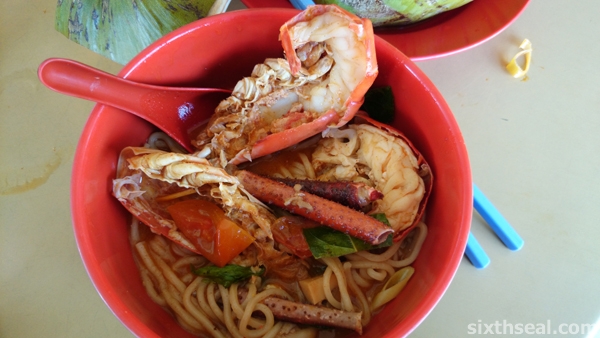 However, the one in Dian Xiao Er is a reasonably good facsimile of the original Glory Cafe Tom Yam Coconut Big Head Prawn Noodles and I’ll recommend it if you don’t feel like driving down to Sarikei – you can have your fix right in Sibu! It’s located at Lorong Ding Lik Kong 31.