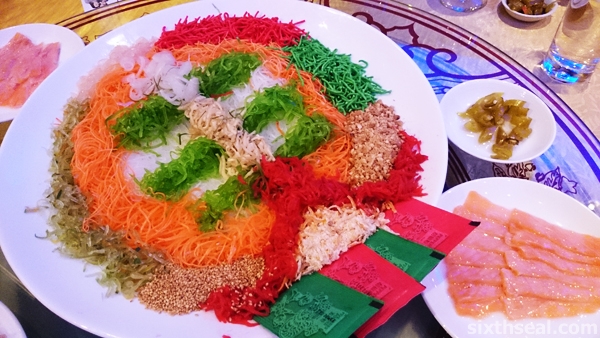 I just had my first yee sang dinner of the year last night. This salmon yee sang is made with shredded vegetables made to look like the Chinese character for “sheep” (羊) coz the Year of the Sheep is coming up. 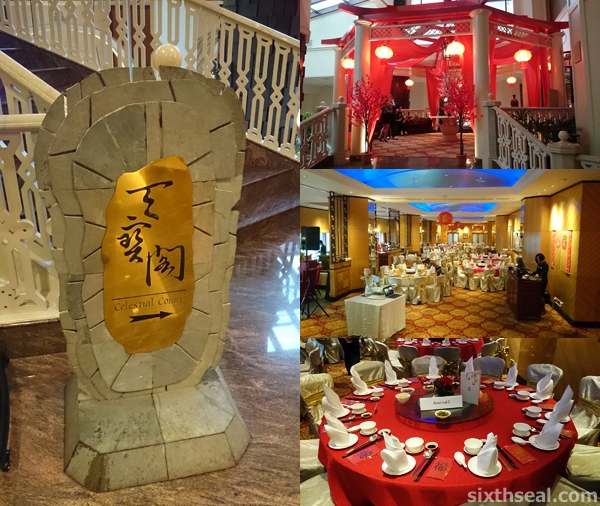 It’s just less than a month till Chinese New Year so the annual “lou sang”/“sau kong” (traditional end-of-work before CNY company dinners) sessions are starting to kick in gear. This one was held by Tourism Australia at Celestial Court at Sheraton Imperial KL. 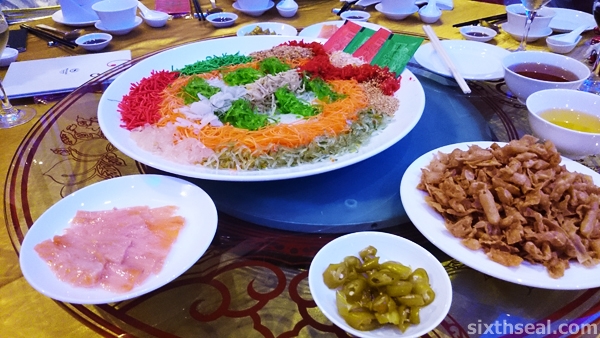 I love how they made the raw fish salad to look like the Chinese character for sheep – 羊. I didn’t actually notice it until someone pointed it out. The waitresses poured in all the ingredients and each one signifies something e.g. fish for 年年有余 (Abundance throughout the year), oil for 一本万利 and 财源广进 (May you have 10,000 returns with your capital/Numerous sources of wealth), carrots for 鸿运当头 (Good luck coming) and even the crushed peanuts for 金银满屋 (Household filled with gold and silver). 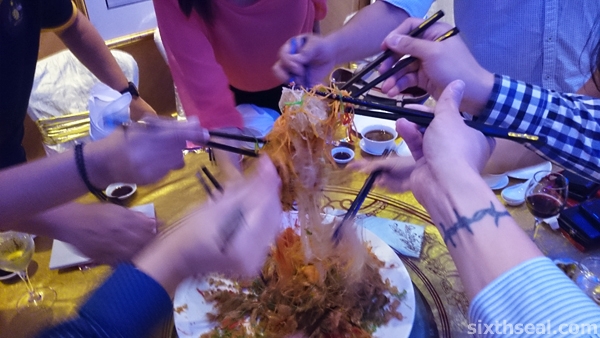 It’s a highly ritualized service and a lot of places actually states the auspicious Chinese phrases out loud as they pour in the ingredients. We tossed the salad while wishing for various things, mine was for family and more vacations and travel for 2015. 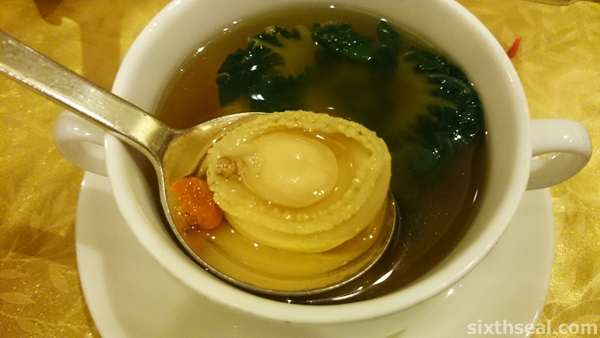 I really liked this clear soup – the baby abalone is super tender compared to the wedding dinner I went to last weekend. The broth tastes amazing too, the seasoning is just right and the sea cucumber and fish maw just slides down my throat. 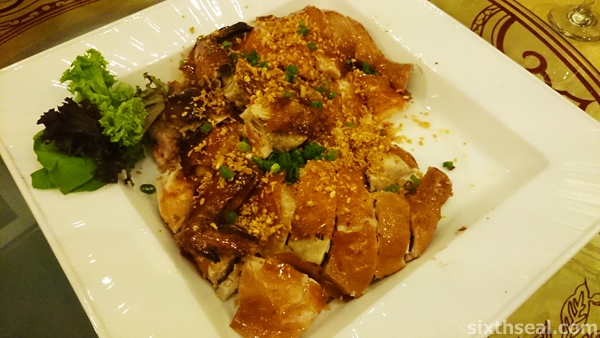 This is my least favorite dish in every Chinese banquet and I don’t usually partake much but the golden garlic “sand” that goes with the roasted chicken is very nice. 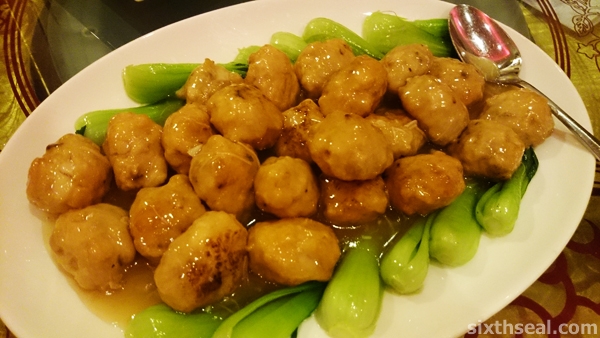 Delicious! I liked the thick, reduced spring onion sauce which was heavily seasoned with dry scallops – it coated the stuffed scallops and added a lot of flavor and a slippery texture prized in traditional Cantonese cuisine. The stuffed scallops were very flavorful and I couldn’t help popping more than a few of these babies into my mouth. 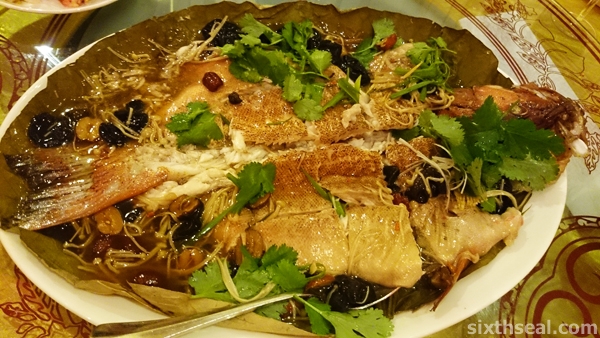 The fish dish is my favorite dish in banquets! I like how this one was presented on a lotus leaf and it’s pan-seared instead of steamed, giving it the Maillard reaction and caramelization that adds a note of sweetness to the fish. 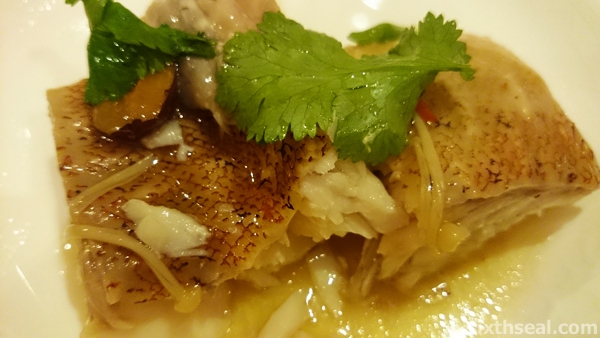 It was slightly overcooked though and I felt it should have come before the saltier stuffed scallops dish but it’s still great paired with my white wine. 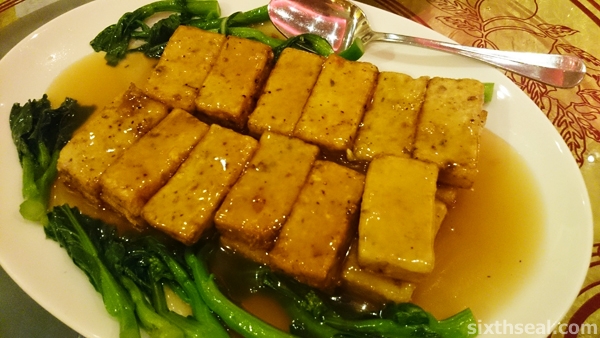 I was quite surprised to find out that I actually rather enjoyed this dish. I eat everything but there are certain things that I don’t like (but will still try) – beancurd/tofu being one of the examples. This doesn’t taste like tofu at all, it’s stuffed with fish paste and the tender texture of the beancurd contrasted nicely with the slightly resistant fish paste made in-house. 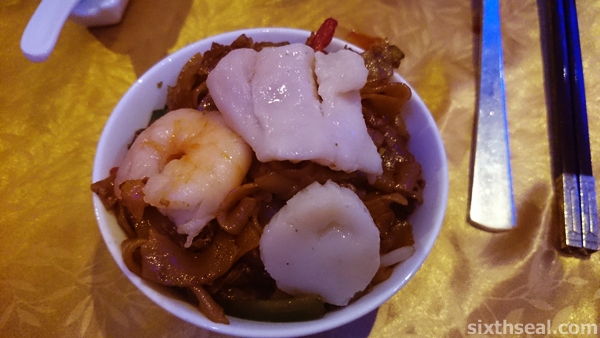 The staff at Celestial Court at Sheraton Imperial offered to portion every dish (including the fish) which I thought was great. It’s a service that’s expected in higher end Chinese restaurants nowadays, although you can refuse, of course, it’s up to each table’s preference. I don’t know what that says about the evolution of community dining but even our family opts for that when we eat out in Singapore.

The kueh tiaw was actually pretty good, if slightly oily, and each bowl had a large prawn, slice of fish and scallop. 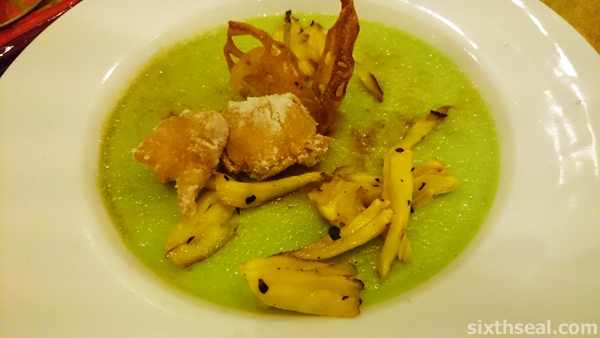 This dessert was conceptualized by Chef Sherson Lian (have seen him on AFC before) who coincidentally sat on the same table as I did. It’s supposed to be a local crème brulee made with local ingredients, which begs the question about the glaring foreign ingredient in the dish – raspberry. It turns out that the component was supposed to be roselle jam but the roselle (Hibiscus sabdariffa) came too late for it to be incorporated into the dish.

I loved the crispy battered rambutans, pieces of jackfruit and lotus root and I can see the direction it’s going – excellent stuff.

It was a great finish to the first yee sang dinner of the year and I polished off my (rather large) portion. 🙂