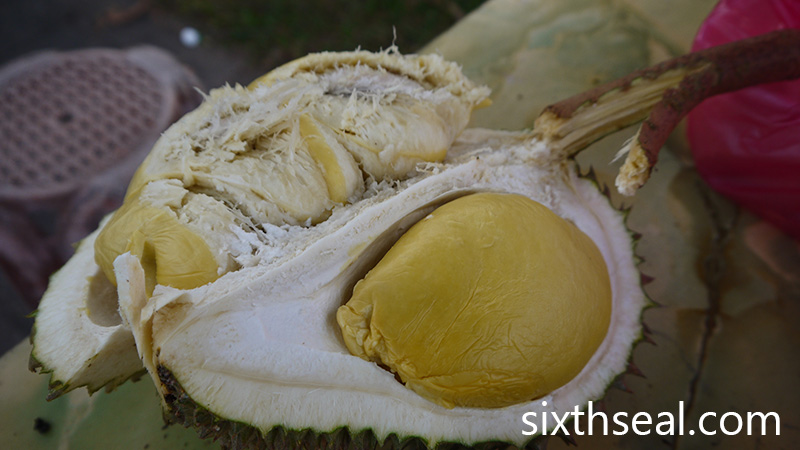 I had the chance to eat two unique Penang-bred durians when I was there last week. This is where I had the D15 Durian (known locally as chap goh hor – a Hokkien word meaning “Number 15 durian”) and Ganja Durian. The latter is actually the D158 clone and originated from Thailand, where it is known as Ganyao/Kan Yao. However, all the durians here are planted locally in Georgetown – these are true Penang durians. 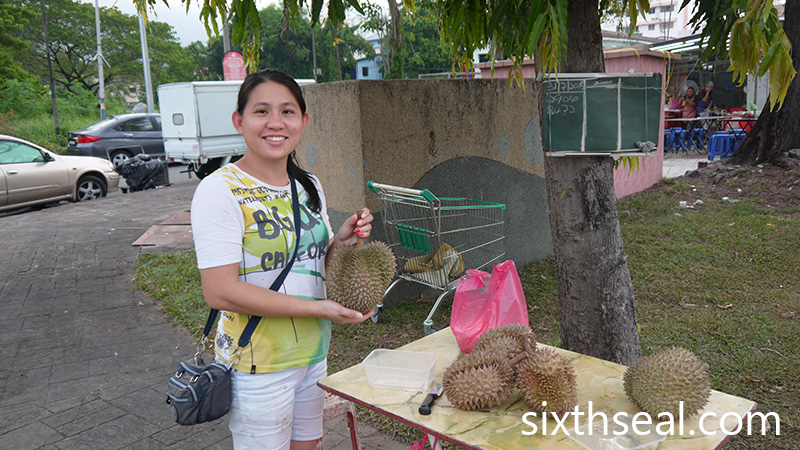 We were at the Gurney Drive hawker centre and I saw a durian stall owned by the friendly Yen. She had two types of durian on display – the D15 durian and the D158 durian and I wanted to eat both so I got one of each. They’ve both very different in terms of taste and texture, I personally preferred the Ganja durian more. 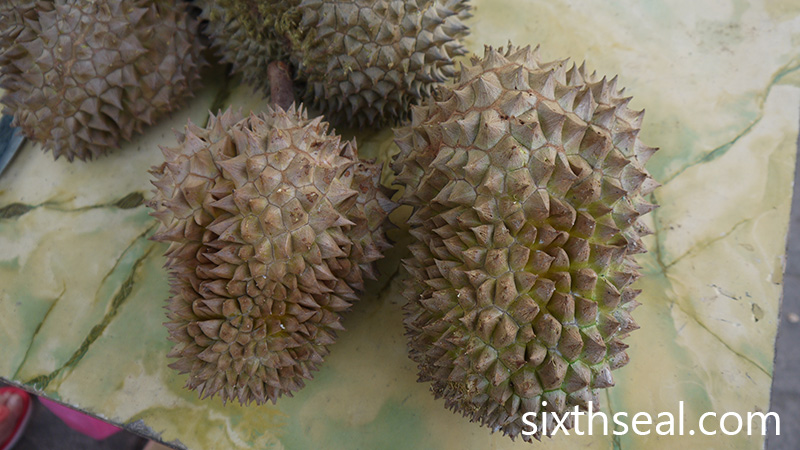 This is an odd shaped durian – as you can see from the photos, they’re very asymmetrical with a dusty yellow husk. 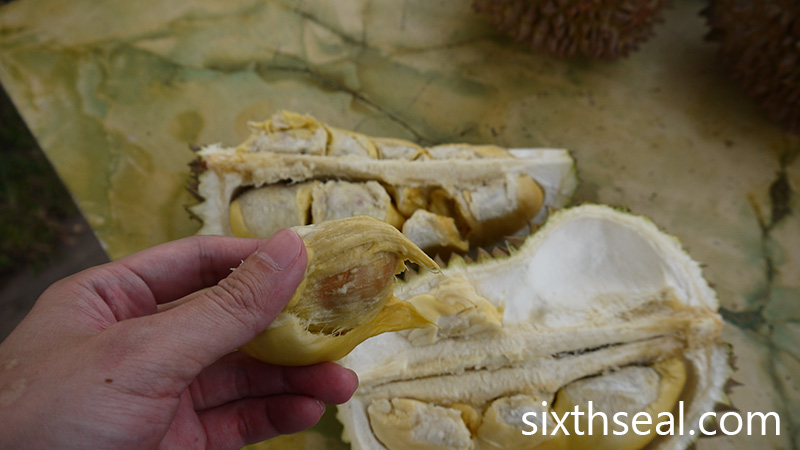 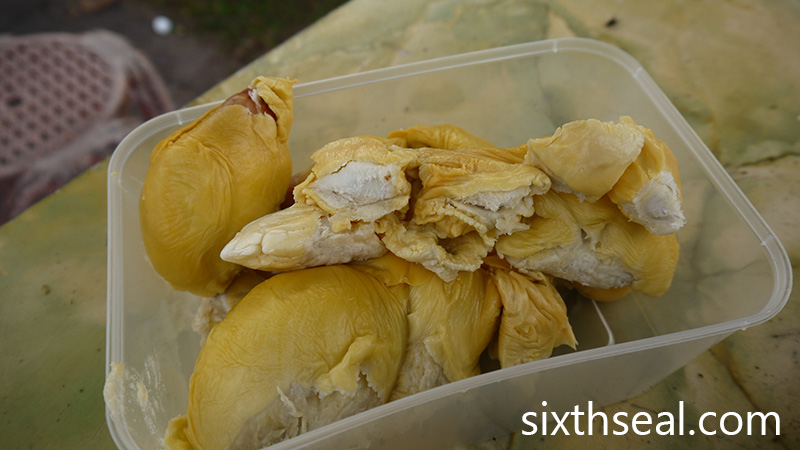 It has a tapering shape that goes from wide to narrow, like the top half of an hourglass. The thickness of the husk and the middle is noteworthy, as it makes it easy to recognize the D15 durian. The flesh is a pleasant orange hue the locals call ang bak (not to be confused with the durian, the term means red flesh). 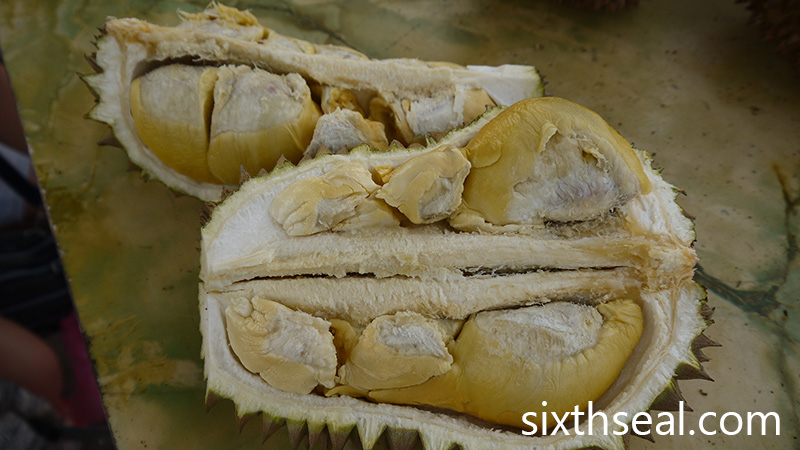 The taste of the durian is slightly bitter, with almost no fibre. The top part of the fruit (the widest section) yielded rather delicious flesh but the bottom part is too narrow and the seeds from there were mostly hard and inedible. This isn’t the same durian as Green Skin 15, which seems to be a variant or hybrid of D145 Green Skin. The D15 Durian is a decent late season durian that’s still available end of July/early August. 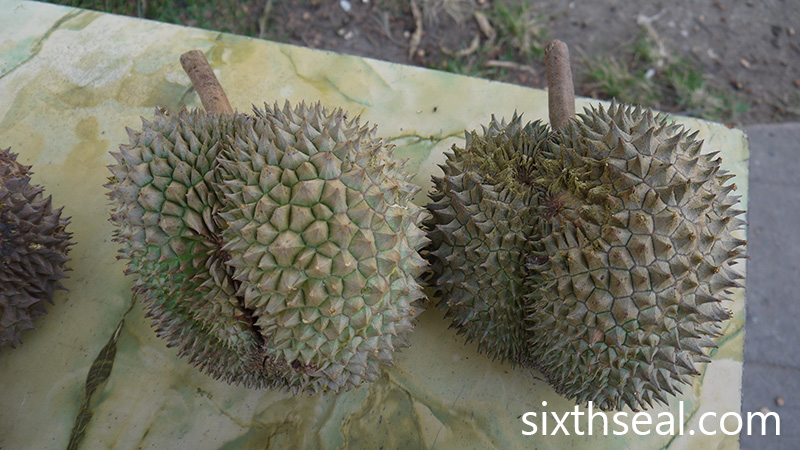 This strangely named durian actually means cannabis. The Sanskrit word ganja is local slang for weed and it’s said that this durian got its name from the addictive properties of its flesh.

I, for one, can attest to the awesomeness of this particular durian strain. It’s also RM 18/kg but heavier at 2.5 kg for RM 45. 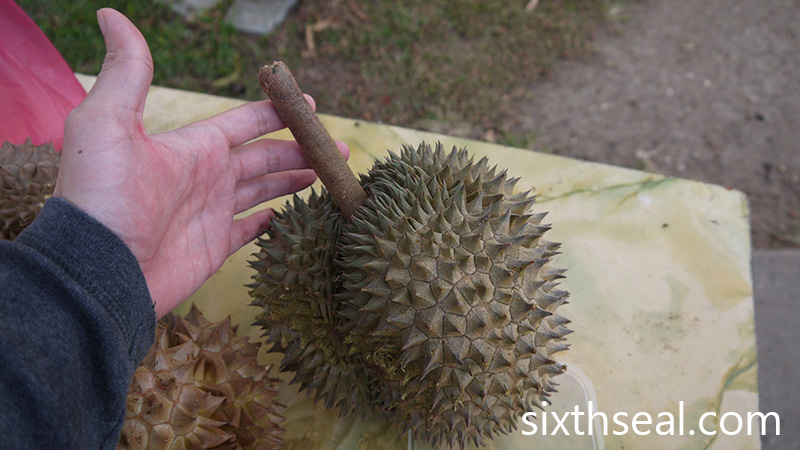 It’s quite likely that the Ganja Durian got its name from a mispronunciation of the original Thailand name for it – Ganyao or Kan Yao. Ganja is the same durian as Ganyao in Thailand but this is planted in Penang. It’s the D158 durian clone and you’ll recognize it straight away due to the extraordinarily long stem. The stem of this durian is easily more than 6 inches long and sticks out like a sore thumb. 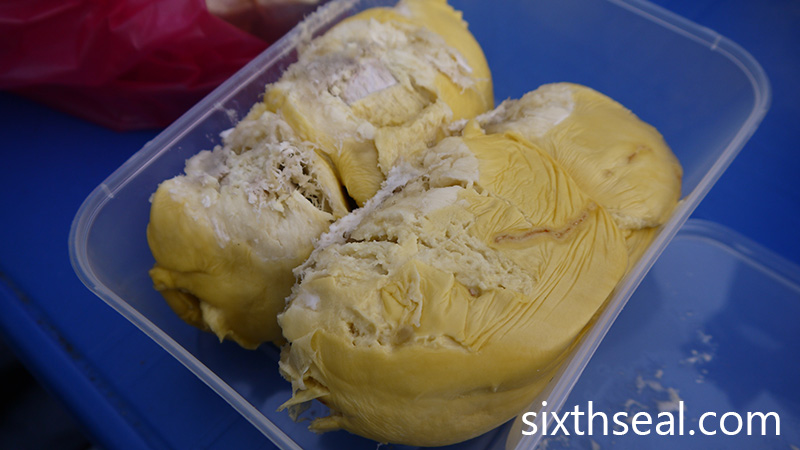 You can see the stem jut out longer than the actual durian in a lot of cases. The round nature of the durian and the large fruit makes it easy to identify as a D158 durian. It’s almost shaped like a heart – not the anatomical organ but the simplified <3 shape with two equal parts. It has golden white flesh with red seeds (!). 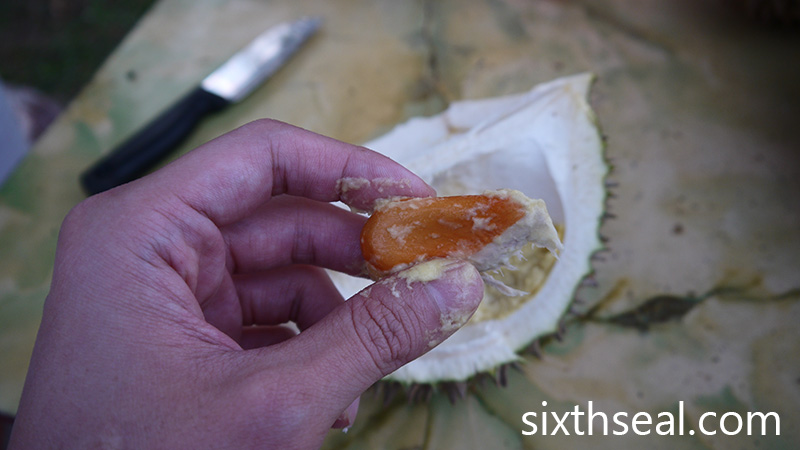 I love the taste of the Ganja Durian. The flesh is sweet and very, very sticky – like peanut butter. It’s the first time I’ve ever had such a sticky durian, and the texture lingers in your mouth for a long time before it gets swallowed, again like PB. 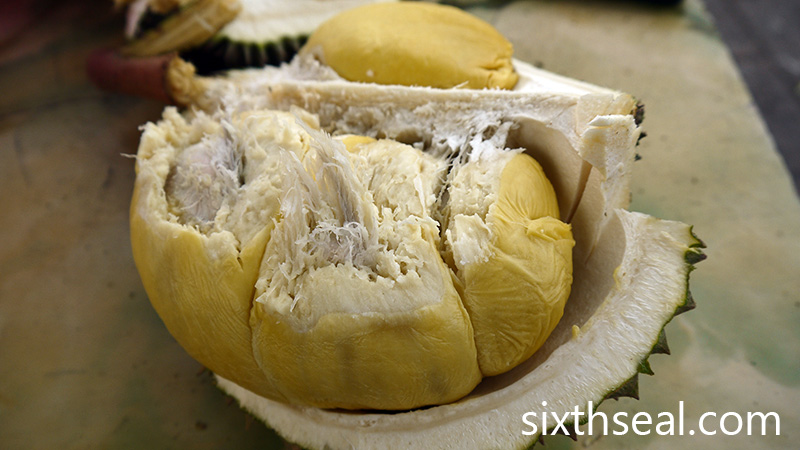 My better half though it was very fibrous but I really don’t think its fiber in the traditional sense when describing durians. It’s more like a matrix that’s spaced out so thinly that it holds the sticky flesh together. I don’t know if that makes sense but one thing’s for sure – there’s A LOT of flesh with a relatively small seed. 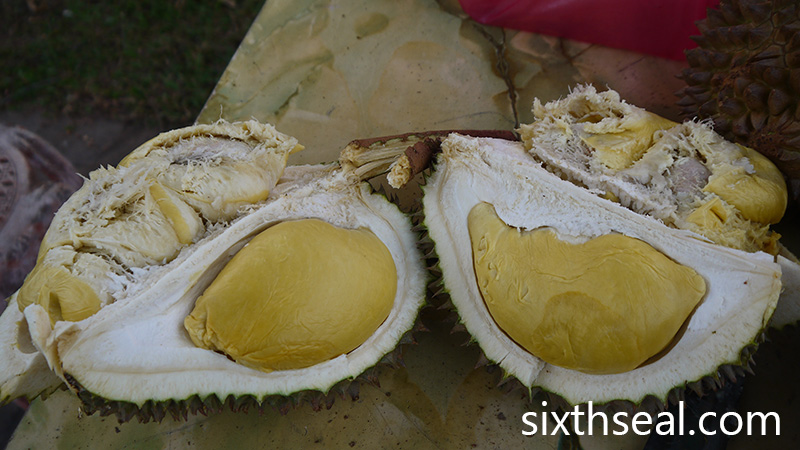 The Ganja Durian from Penang is soooo good it’s one of the best durians I’ve ever had. I’ll rate the D158 durian higher than Black Thorn or Musang King. There’s so much sticky flesh that I was happily eating each fluffy, pillow-like seed until I was licking my fingers. Highly recommended end-of-season durian, it truly deserves the name of Ganja.