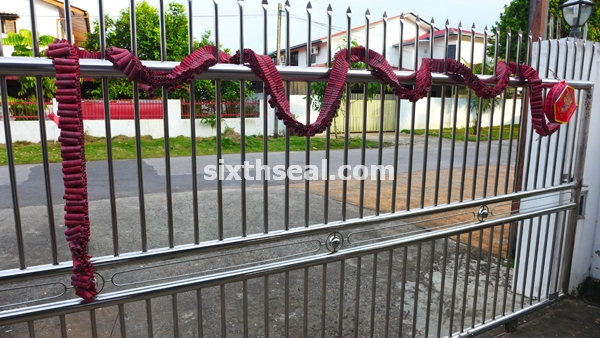 This is a powerful multi-layered braided string of 39,999 traditional Chinese firecrackers – it’s huge, with lots of powder and chalk, which produces tons of red paper. I strung them up around the gate like a snake yesterday for the 7th day of Chinese New Year. 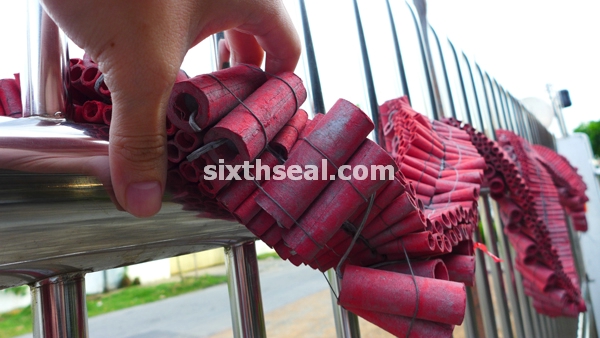 It’s really, really loud. I was standing about 1 meter away and I could feel debris and chalk flying right past me.

Anyway, after my ears stopped ringing I suddenly heard a cat’s pitiful mewling.

Puzzled, I looked around.

We searched and searched and finally isolated the mewling to a corner with our temporarily deaf ears. Me and my dad thought it was coming from *inside* the air conditioning unit. 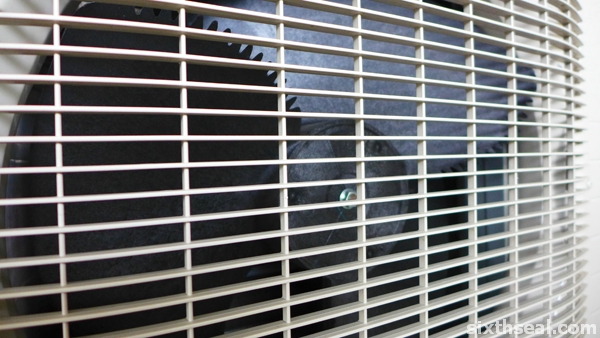 We spent a good 10 minutes trying to pry it open coz the cat sounded like it was trapped inside.

I kept looking in too but I couldn’t see the cat.

My dad went in to fetch a suitable spanner to undo the lugs while I tried to see how the cat could have gotten in but there are no openings.

…and then my dad happened to look up. 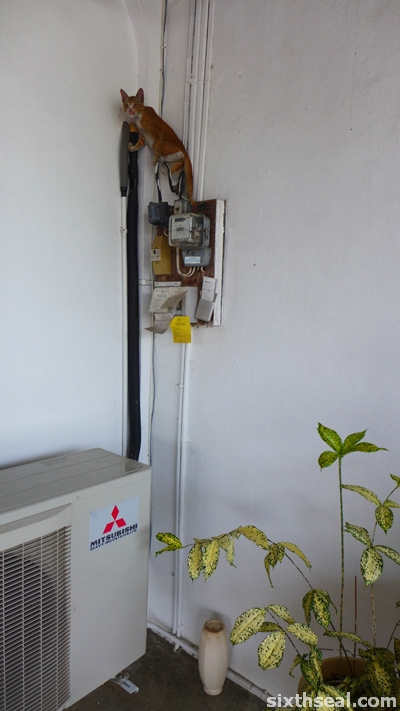 We were crouched down and looking inside the air conditioning unit so we never thought it was coming from above. Besides, our hearing was shot. 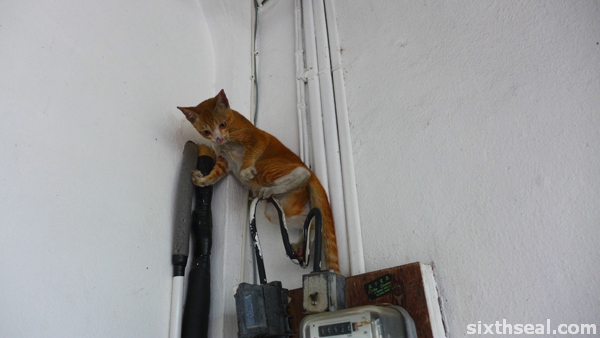 I think it’s a stray that was walking from the backyard when the firecrackers scared her and in a burst of adrenaline, she somehow managed this amazing acrobatic feat that she couldn’t extract herself from.

I had to get her down. 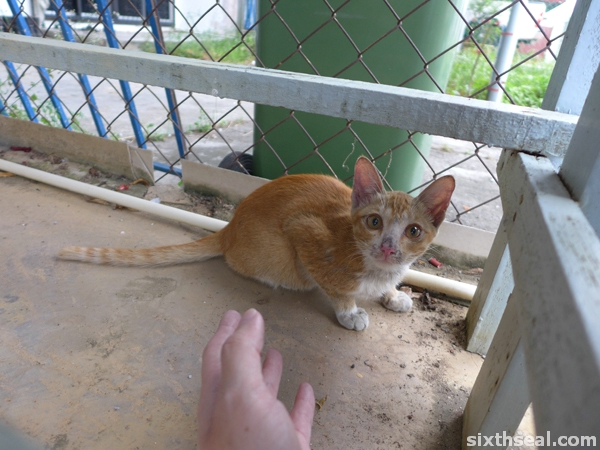 Nice cat, wish it stayed but she haughtily stretched herself and left after I petted her a little and the ordeal was over. Ungrateful. Hmph. 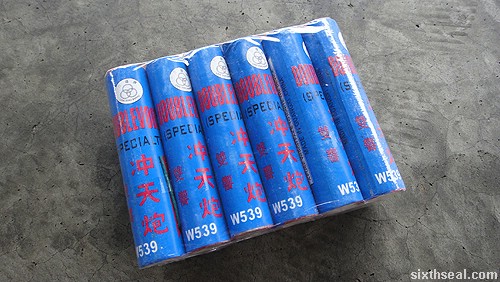 I used to have a bit of a phobia with these crackers – it’s a double report affair, with the initial primer launching the entire cracker skywards before exploding with a loud bang. I’ve never thought of the initial blast as an explosion, it’s the second one that’s the real banger. 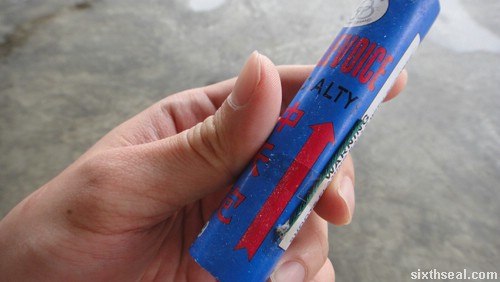 Once when I was a kid (with little fingers which would have been mutilated by more powerful firecrackers) one of these crackers collapsed when I lit it. I was in one hell of a dilemma – these things are supposed to shoot towards the sky (thus the name) – but it actually goes the direction it’s pointed to unless it’s firmly on its base. 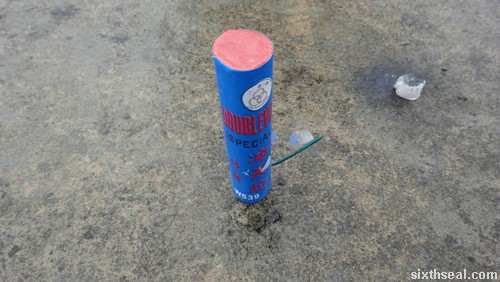 Anyway, the fuse was going and I got my panties all in a twist thinking of whether to risk handling the toppled cracker and put it upright, or let it be. If I had let it be it would have gone into my house and maybe shattered a window or two so in the end I did a bit of a compromise and kicked it into the drain. 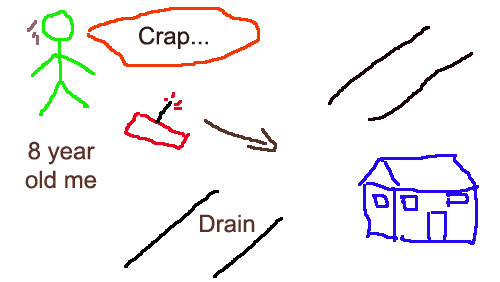 Now, this puts a totally new spin (no pun intended) on things – the second and more powerful blast will go where the cracker is oriented so it’s a bit like Roulette. Luckily both explosions happened in the drain but that scared me more than a little. As I grew older we took to lighting the cracker and throwing it into the sky and dodging the second blast as it came down, it was the sort of stupid fun we got up to during Chinese New Year and neighbors hated us. Heh!

I still do stupid things sometimes like lighting firecrackers indoors.

I grabbed a pack when I went fireworks shopping during CNY eve to see if it’s still like what I remembered from my childhood.

The funniest thing is near the end of the video when I got startled by the cracker while my mom was a cool as a cucumber, still steady with the digicam. Haha!

Anyway, I haven’t played with these for a long time and the problem with it is that the initial report (which launches the cracker into the sky) is a propellant of sorts…and it’s HIGHLY (no pun intended) variable. Made in China, yo! 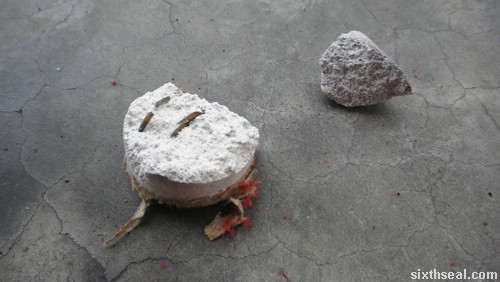 It usually goes up to 12 feet or more but this one barely made 7 feet (judging from the lamp post) and had a diagonal flight path so I was apprehensive and recoiled at the report. I still find it hilarious.

The weird thing is, as a kid you remember these crackers as being one of the loudest things on earth but as you grow older the sound seems…diminished. The sonic effect isn’t what I remembered from my youth. 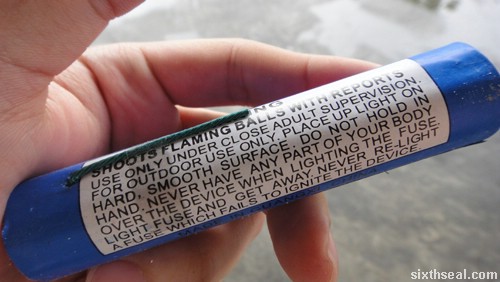 More on firecrackers and fireworks when I do my annual Chap Goh Meh roundup. 🙂