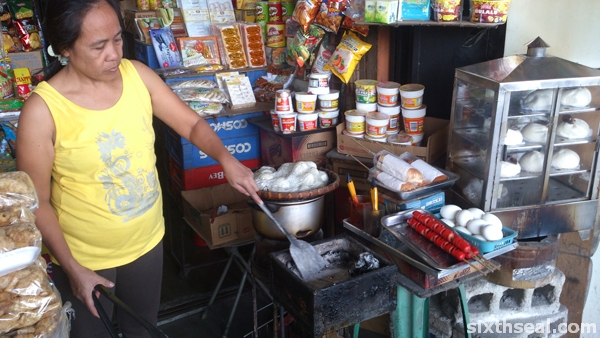 Hotsilog is the Tagalog name for hot dogs. This is different from the Philippines chorizo type sausage called longganisa. Longganisa is short links of pork sausage while hotsilog is actual hot dogs as you know it – it’s also much longer. No, there’s no double entendre intended. 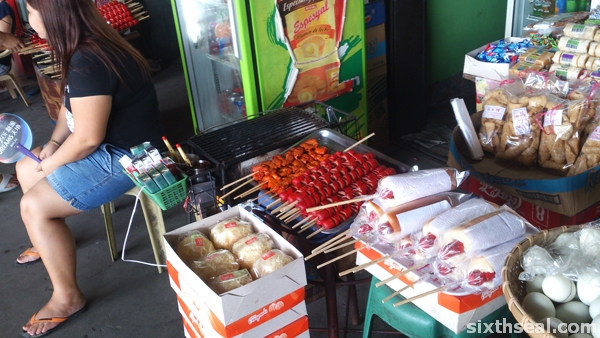 You can find hotsilog sold in bus stops and other stalls where quick travel food is required. It’s usually sold next to balut and chicharon (pork crackling). The history of the Philippines with the long American presence has created this long and *brightly colored* radioactive red hot dog that is sold on a stick or in a bun. 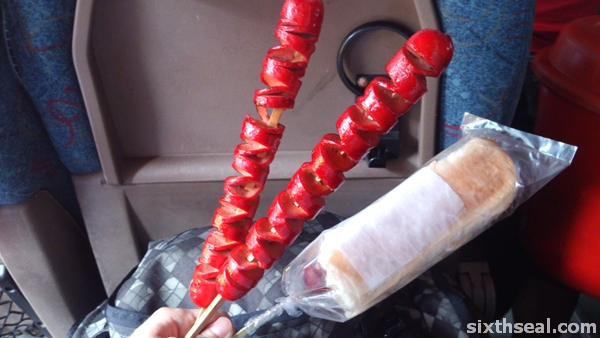 The ones in a bun costs 30 PHP (about RM 1.80) while the hotsilog on a stick costs 25 pesos (RM 2.20). The shorter hotdog in a bun actually costs *more* than the longer ones on a skewer! You’ll be initially surprised that a locally made bun wrapped around the hot dog will actually hurt your wallet more…especially when you see the length. 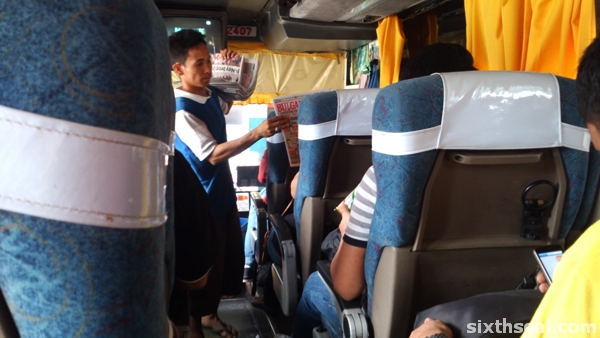 Hotsilogs on a skewer / stick is much longer than the ones in a bun. That means you get more meat for 5 pesos less for the former. Street peddlers will come on board while you’re in a bus and sell all sorts of stuff from Buko Pies to newspapers. 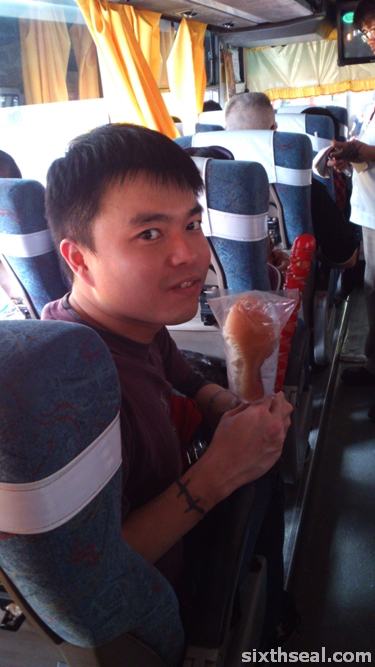 The hotsilogs is a distinctively American influence that has been given a local twist. It tastes much like what you’ll expect a hotdog or sausage to, but juicier and mildly spiced so it’s good to eat by itself without other condiments. 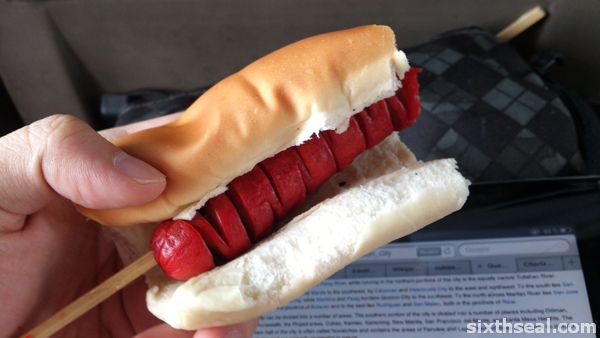 It’s an interesting experience to eat it on long journeys. The way it’s cut into spirals before being cooked is something the locals have done to make it cook evenly. 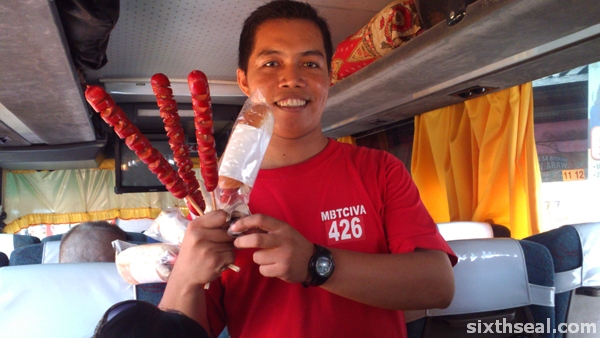 The local hotsilog is also surprisingly sweet and worth a try if you’re on a bus with nothing better to do. You might also require a hardy stomach. 😉 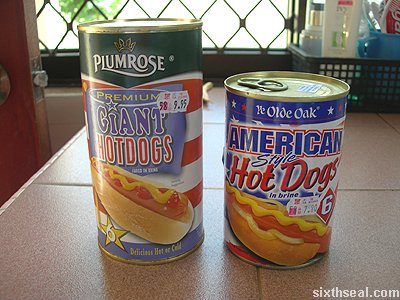 It’s a face-off of massive proportions, the sausage event of the century – sixthseal.com is proud to bring to you: Plumrose Premium Giant Hotdogs vs. Ye Olde Oak American Style Hot Dogs. It’s an evaluation between the two different brands of canned hot dogs (sausages) in brine. I hate this stuff. :p 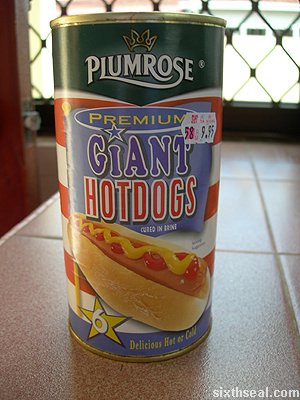 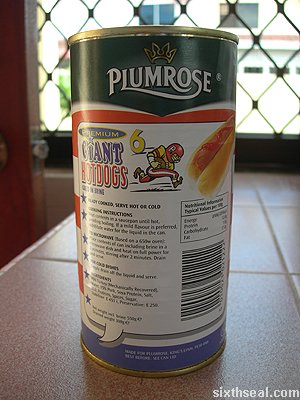 Plumrose Premium Giant Hotdogs has an image of a football player at
the back to emphasize the Americana in the product. It’s made primarily
of turkey (mechanically recovered turkey, that is, which isn’t exactly
people per se, but it’s turkey parts) and comes with a serving
suggestion of a conventional hot dog (in a bun). 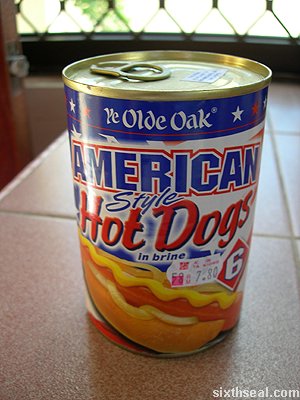 The second contender is the Ye Olde Oak American Style Hot Dogs
(RM 7.80) a conventional can also holding 6 (six) “American Style Hot
Dogs” in the can. These are the common size hot dogs you see in the
freezers of supermarkets in both length and girth. 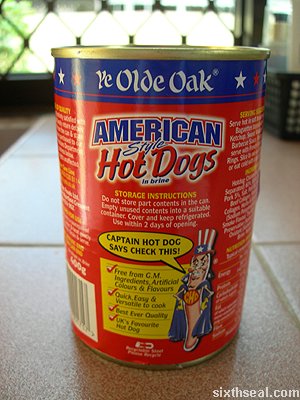 Now, the thing about Ye Olde Oak American Style Hot Dogs is that it actually has a mascot to go with it. No shit. It’s called Captain Hot Dog
and it’s a sausage dressed in Lincoln-era colors that’s partially
naked. There’s just something very wrong about this, but I can’t put my
finger on it (no pun intended). 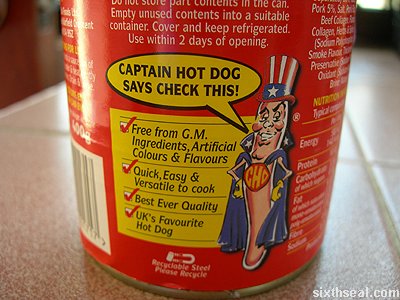 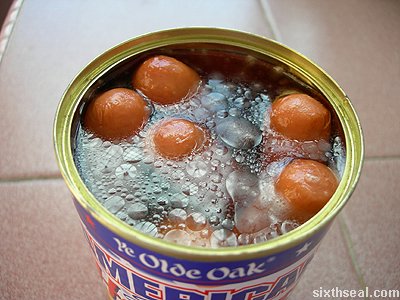 The can is an EZ-open container with a snap off lid, that’s a major
thumbs up for Ye Olde Oak American Style Hot Dogs. I don’t want to use
a can opener unless I have to. The brine looks mighty oily though and
it’s like liquid fat, that’s how vicious the brine solution is… 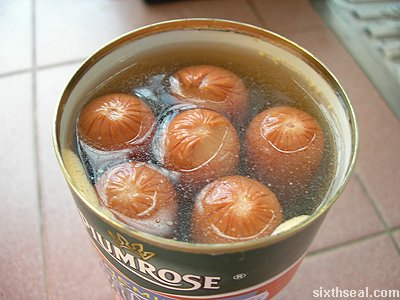 The Plumrose Premium Giant Hotdogs requires a can opener to open up
the container. The brine looks more appetizing in this one – there’s no
large “oil slicks” or sudden bobs of fatty material – this one is
brine, and just brine, thank you very much. However, there are two
disturbing patches of brown colored froth at the sides of the can… 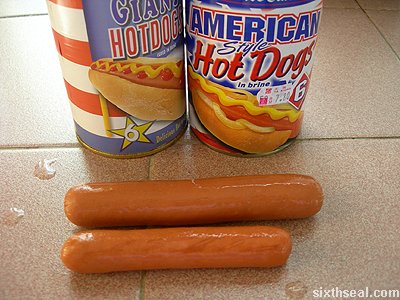 Plumrose Premium Giant Hotdogs wins in both girth and length but is size really the deciding factor? We’ll see… 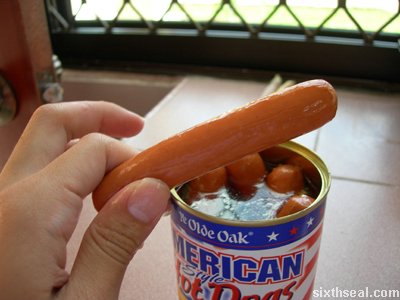 The Ye Olde Oak American Style Hot Dogs looks like what the normal
sized sausages looks like. There are wrinkly textures to the side of
the sausage, much like the ones out of the freezer. Bonus points for
getting the look right. 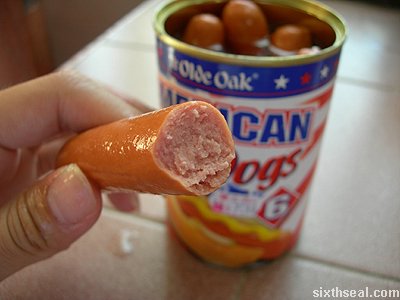 It tastes like what “real” sausages should taste like – the skin and
filling is firm and biting into the hot dog doesn’t cause any bursts in
brine (an all too common occurrence with sausages in brine) and it
actually tastes like a sausage. It’s good. 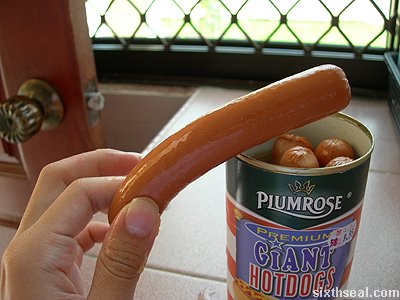 The Plumrose Premium Giant Hotdogs looks like oversized sausages or
gourmet sausages (except we can’t really call sausages in brine gourmet
sausages, can we?). It has a slightly pink exterior and it looks like
its prime. It does look a little limp, but other than that, everything
is peachy. 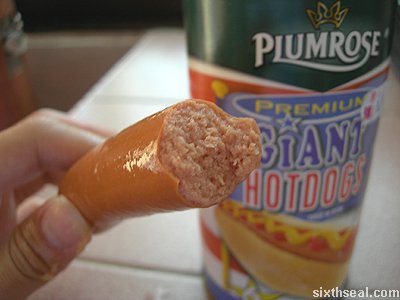 This hotdog has one major flaw – the skin instantly slides off and
practically disintegrates when bitten into and the filling comes
pouring out in your mouth like an obscene…er, ejaculation. I did not
like that feeling. No, not at all… 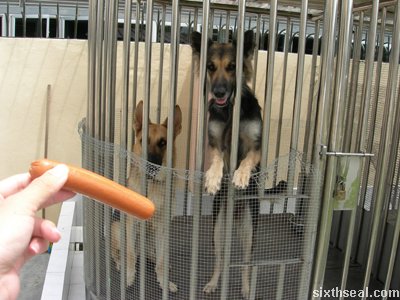 Captain Hot Dog, I’ll like you to meet the German Shepherds. 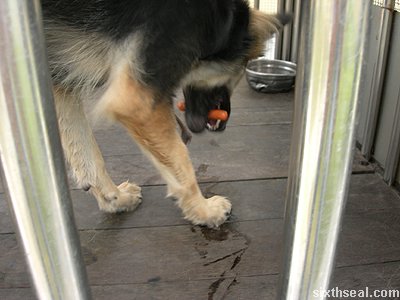 I realized with much regret that I’ve just taught the dogs to go after a weenie, er…I mean, wiener.

Note to self: Start wearing jockstraps.