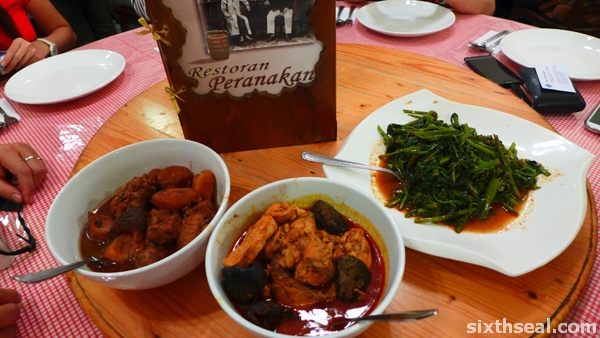 Restaurant Peranakan is the aptly named place known for it’s Peranakan cuisine. It’s often been cited as the #1 place to go for Nyonya food in Melaka. Peranakan (or Straits Chinese) is a distinctive racial group in Melaka – it comes from Chinese settlers marrying locals and is an entire culture unto itself, the hotbed of which lies in Melaka. 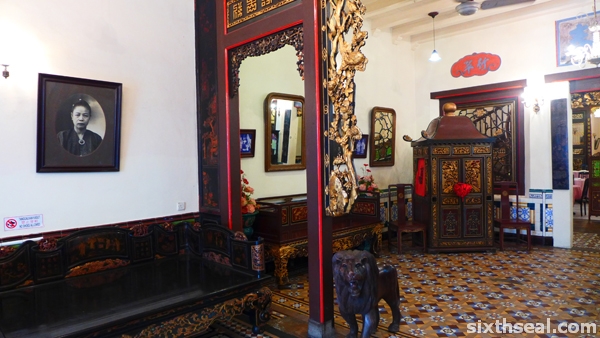 Nyonya food is conglomeration of Chinese and Malay food, but there are some really unique dishes they call their own. I had lunch here while on a road trip to Melaka. 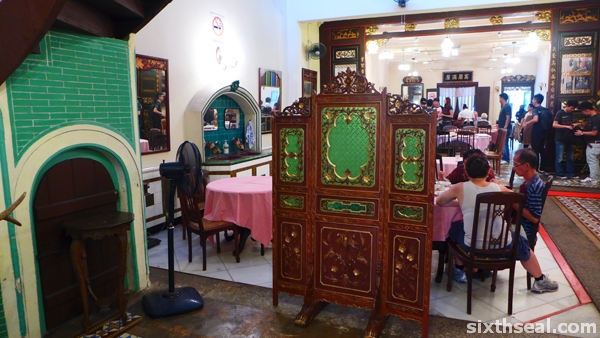 Peranakan Restaurant has a really nice décor which reflects the heydays of the Baba Nyonya clan. 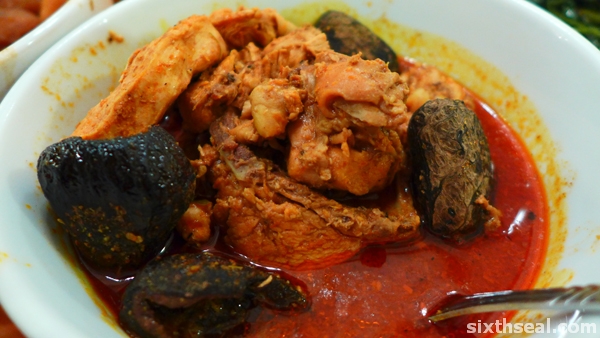 This is perhaps the most well known Nyonya dish. It’s chicken cooked with kepayang tree nuts. Buah keluak is actually poisonous before being prepared for cooking. It prompted a lot of Googling when I mentioned that coz someone ate the inside of the nut. 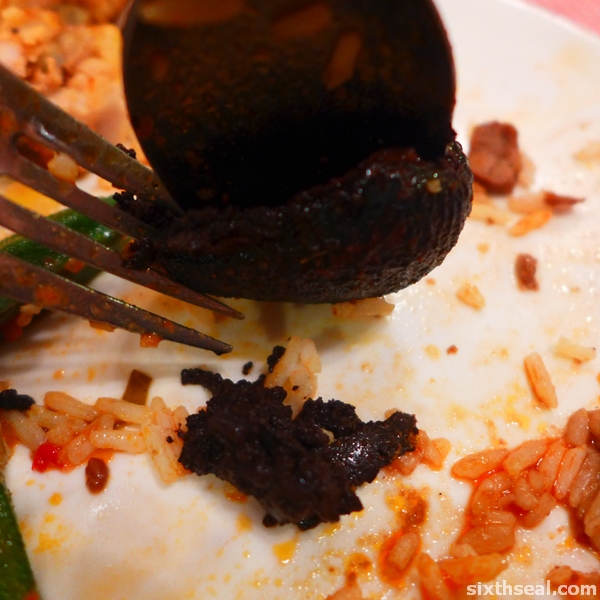 I like this dish – it’s a very rich and flavorful one due to the buah keluak. I ate some of the insides of the nuts too – it’s sourish and contributes to the flavor of the chicken. Peranakan Restaurant makes the best ayam buah keluak I’ve had. 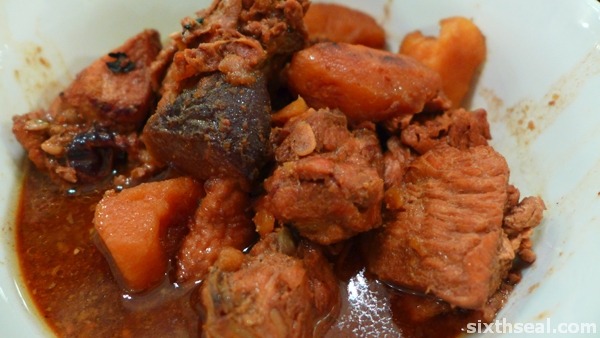 I’ve had this at Donald & Lily’s Authentic Nyonya Food too but that pales in comparison with Peranakan Restaurant’s version. 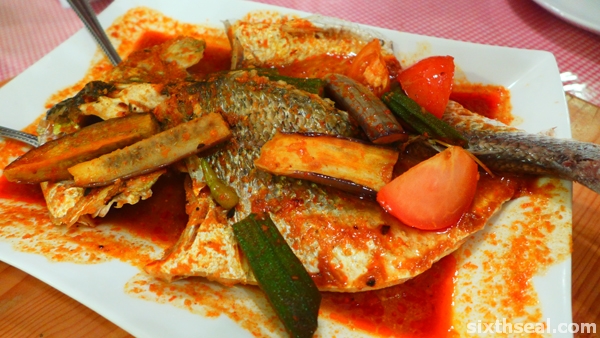 This is a really good and spicy fish dish that I found worthy of mention – it’s cooked with brinjals, tomatos, and ladyfingers and has a sweet, spicy and sour (more towards the latter) gravy that goes very well with rice. 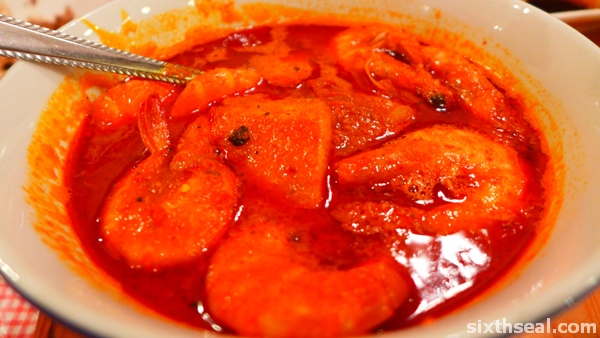 This is a very rich dish of shrimp cooked with pineapples and lots of oil. I set the camera to Vivid and it almost hurts my eye to look at it. 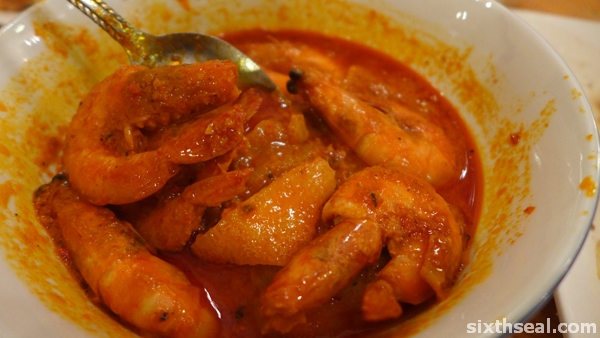 Here’s one that’s easier on the ocular devices. ;) It’s also one of the dishes I’ll recommend at Peranakan Restaurant. 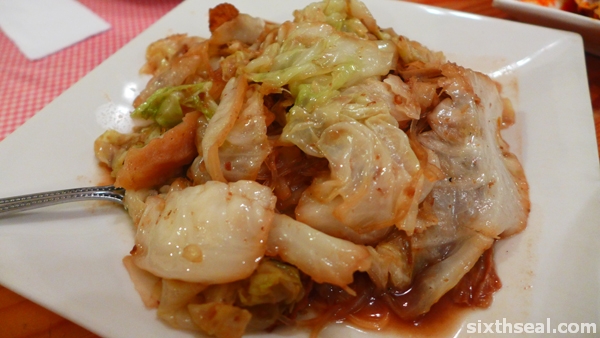 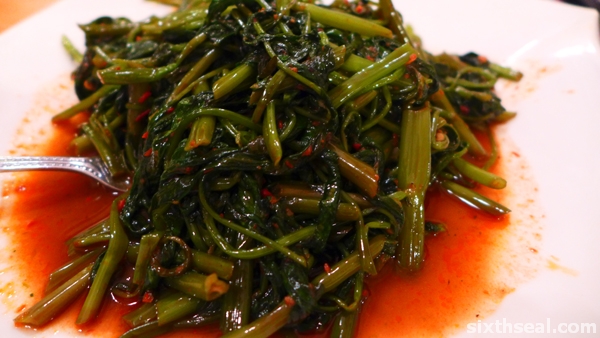 This dish has strayed into mainstream Chinese cooking that a lot of people forget it’s Nyonya origins. If you want the most authentic version, I guess here’s where you go. 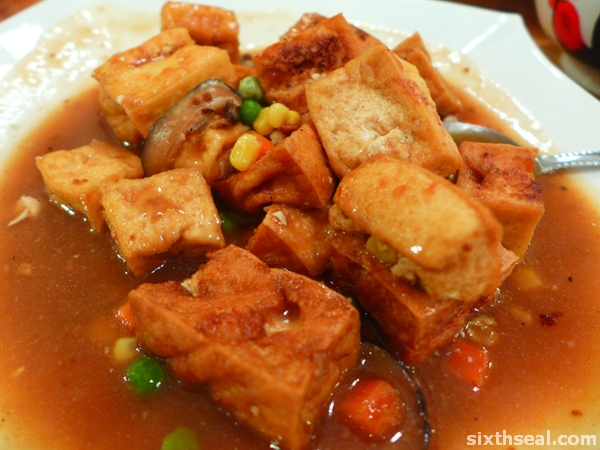 I’m not a huge fan of tofu but it disappeared pretty quickly so I’ll hazard a guess and say it’s pretty good if you like the stuff. ;) 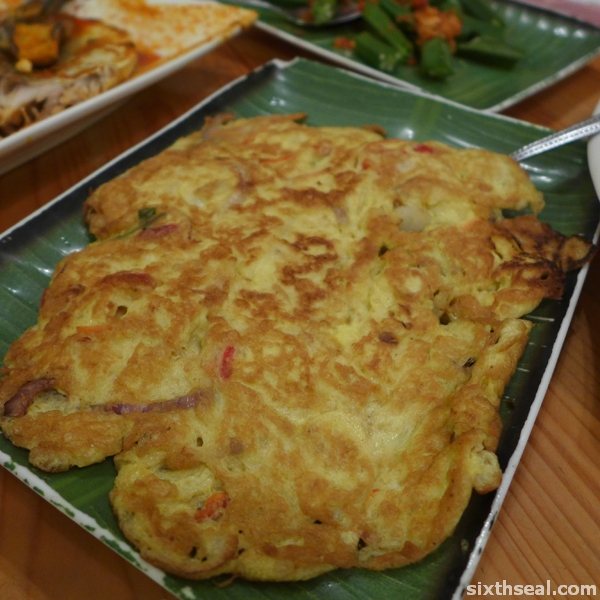 I think this is the egg omelet unless I’ve completely messed up my bearings. Forgettable. 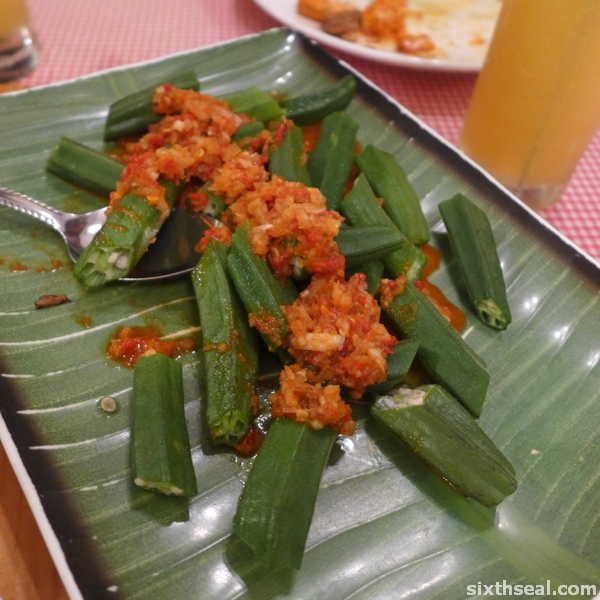 Okra with a splash of sambal on top. Simple, but good. 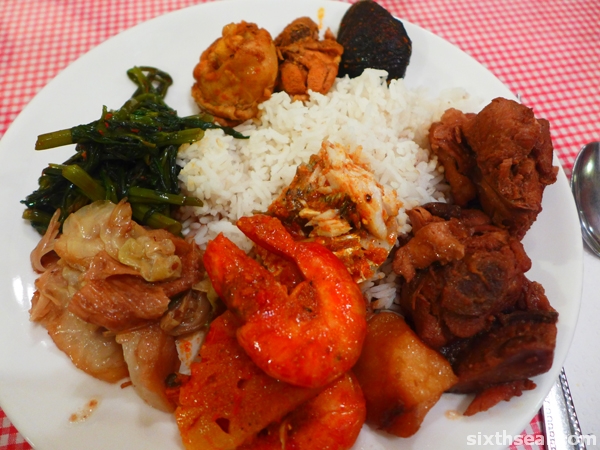 I spent the whole time piling my plate with all the different stuff so I could take a photo. Their flagship dishes are really good, while some are mediocre, but IMHO, Peranakan Restaurant is the place to go for authentic Nyonya food if you’re in Melaka. 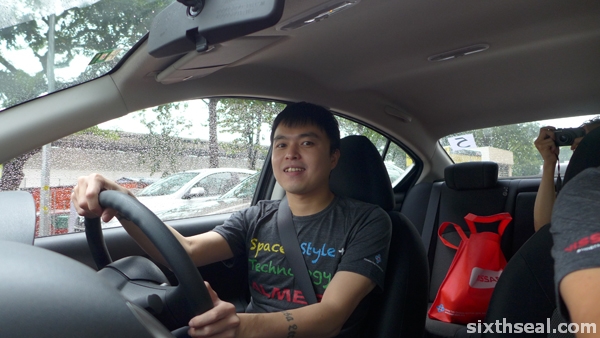 I was there on a the Eat, Play, Drive road trip with a bunch of other bloggers. We drove down on several Nissan Alameras. I had the opportunity to drive the IMPUL tuned one (which is my main ride, with a very auspicious plate too – WXN 6330). Simon, Joshua and Kelly (another group) was kind enough to let me drive the stock Nissan Alamara for a stretch. 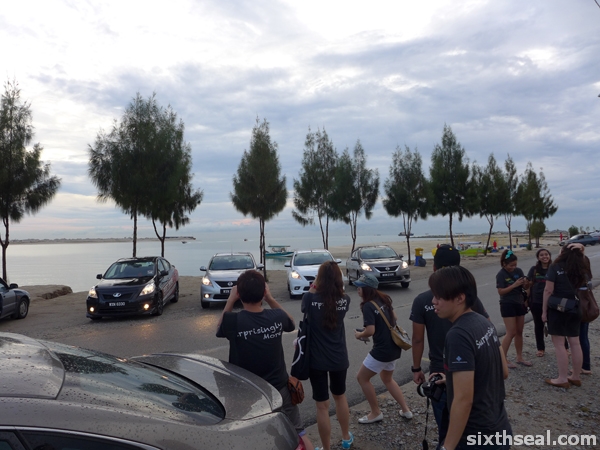 I prefered the Nissan Alamera tuned by IMPUL that was issued to my group – there’s keyless ignition and the specs are pretty decent. I found the acceleration to be a bit lacking, but as they say, it’s not a sports car, but a sedan that’s surprisingly affordable for its class. I was quite impressed by the price of the car for it’s specs. 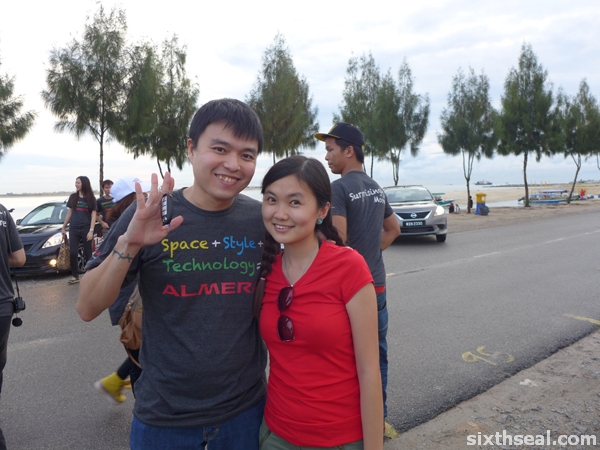 Thanks for the invite Hui Ping! :) 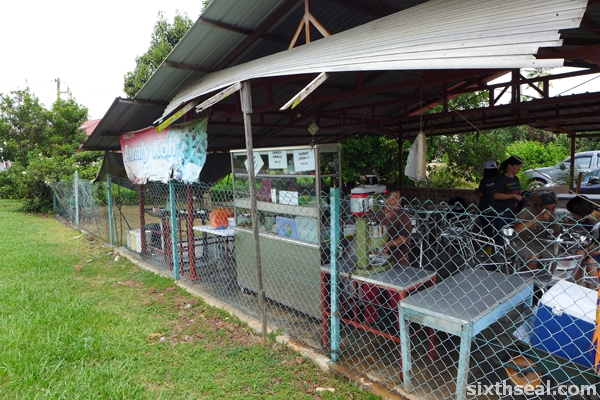 This was also where I had the famous Klebang Original Coconut Shake and while we were driving there, we also stopped by Aunty Koh’s Cendol. This place churns out really good cendol – perfect for a hot day! 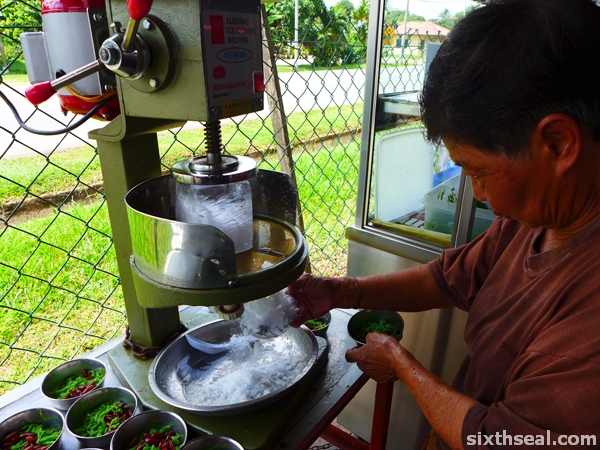 It’s primarily manned by a single woman – the aforementioned Aunty Koh. Cendol is a shaved ice dessert with squiggly green jelly and kidney beans (we use red beans in Sarawak). 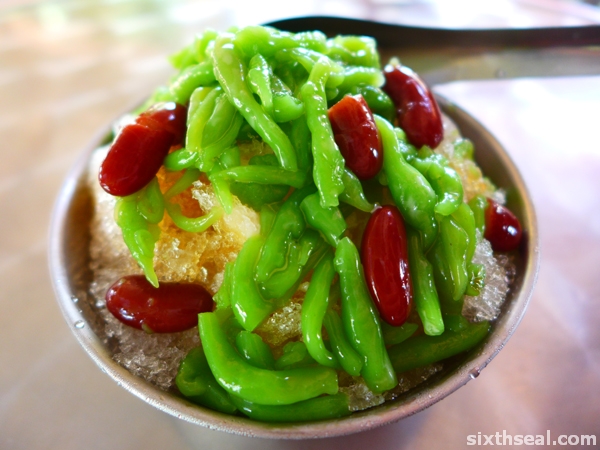 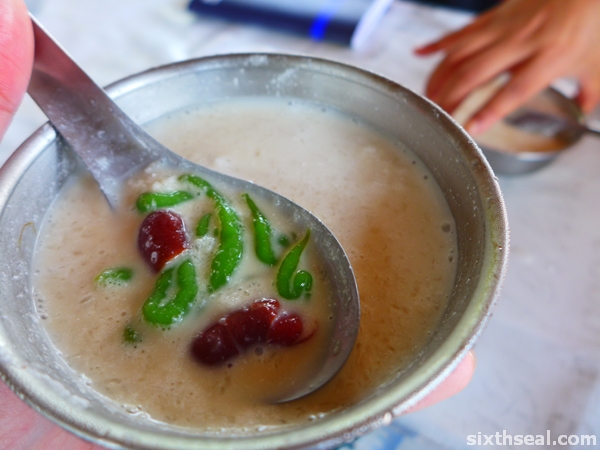 You’ll be amazed by how many people come here for the RM 3.50 (large) cendol. 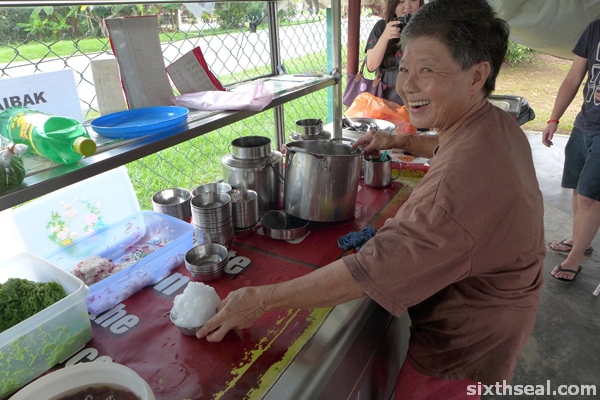 I was tempted to have two (and I think I did have two) but I also heard that this place is famous for it’s taibak (RM 1.50) – which is a very simple shaved ice dessert made with red and white flour squiggles. I found the taste very similar to something we have in Sibu called “wu wei tang” (5 taste soup) which is another shaved ice dessert that has dried apples and other misc ingredients among it. 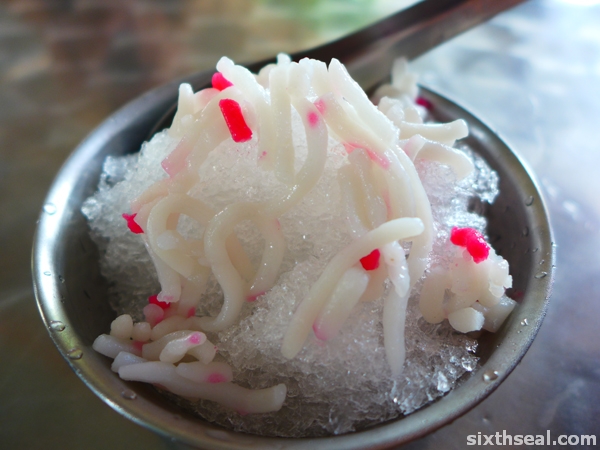 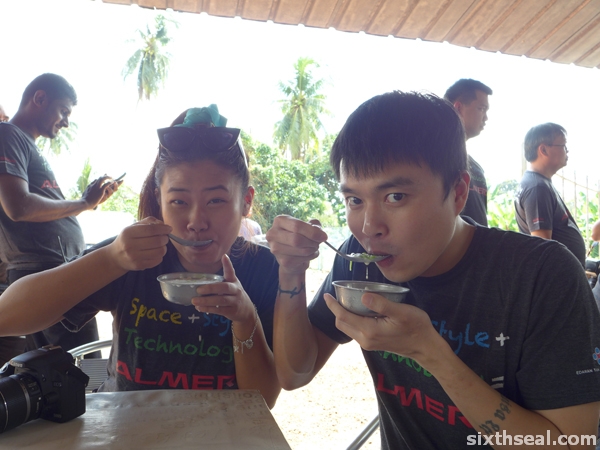 However, I still prefered the cendol at Aunty Koh Cendol. They claim to be Melaka’s best cendol and I’m inclined to agree. I’ve had cendol in lots of places from Penang to Kuantan (click on the tag cendol) and this is among the top ones I’ve had the pleasure of eating. :D