It happened just slightly after the toll. I felt the car slowly lose power…I had a sinking feeling that something has gone horribly wrong. I managed to cruise from the fast lane (on the right) across 3 lanes to the emergency lane. It felt like driving a car that was just running on momentum alone!

I realized that I had run completely out of gas. The car would not start at all. It just coughs. We had just passed the toll, maybe 500 meters or so and we’re stuck on the Penang Bridge!

Naturally worried, I wondered is my insurance would be able to cover me in this case. I know that I have excellent coverage, but what if they say this isn’t a crash and therefore there can be no coverage. It’ s the stress of the situation I guess, that makes you doubt everything.

We had driven down from KL early in the morning and didn’t take any breaks except for toilet stops. I had stupidly thought that a tank of gas would be enough to get to Penang and I didn’t really look at the gauge so the massive traffic jam before the bridge was the final nail in the coffin.

I called the PLUS Highway emergency number and managed to get them to send a guy to meet us.

It took less than 5 minutes before a fellow on a motorcycle came up to me. He had a bottle of gasoline so he poured the minute amount (less than 500 ml is my guess) into my petrol tank and asked me to start.

I tried the ignition but the car won’t go – it seemed that there’s too little fuel for it to start.

My better half intelligently told me to shut off the radio and air conditioning. I managed to start the car – just barely – after that. I know it wouldn’t last long and I’ll need to get to a gas station soon.

The PLUS representative charged me RM 40 for the petrol and after I willingly handed it over, asked for RM 10 “kang chi” (Hokkien for labor costs) making the total RM 50. What an opportunist!

I didn’t really mind though coz it would have been worse to be stuck for hours on the Penang Bridge. We managed to use the GPS to find a nearby gas station and fill her up.

The PLUS dude said he’ll trail us. He never did. We were lucky to make it to the station on that little amount of gas. It was a bit of an adventure though, running out of gas. It’s something that we’ll be talking about down the years – “Hey remember the time we drove to Penang and we ran out of gas on the Penang Bridge?”.

It wasn’t the best start to our Penang trip but it sure was funny in hindsight and it’s a memorable start to our weekend holiday! 🙂 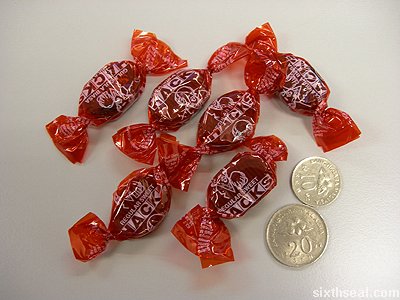 Damn it, petrol prices have gone up by a staggering 30 cents per liter. I can buy 6 Hacks sweets with that!

Quote totally plagiarized from Mandy [velverse.com], one of my ex-colleagues in XM Malaysia coz I find it damn funny. 😉