I’m back in Sibu for the weekend to attend my cousin’s wedding reception. Yih Wen is one of my closest cousins on my dad’s side. I used to hang out with her while waiting to go to school at my grandma’s place when I was younger. She just got married and we had the wedding dinner at Tanahmas Hotel in Sibu.

I’ve actually met Kian Mun (the groom) during my previous trip back to Sibu. We went out for dinner together with Yih Wen’s family, a pre-wedding get-together so to speak. I find him to be a nice guy, his family is from Ipoh.

Here’s my grandma! She’s the matriarch of the family, pictured here with me and my dad.

The wedding dinner was held last night on the 19th of December. I was seated with my cousin Calvin and Noble.

This is the wedding cake. I was pleasantly surprised to see that it had the proper marzipan covering instead of the usual icing. I believe this is the first time I’ve seen this in Sibu. It tasted good too.

Four Seasons Combination Platter
This is the first course. It has six (6) items instead of the usual four. I rather enjoyed the prawn cocktail in the middle. I have a weakness for sweet mayo covered shrimp. The pickled jellyfish was nice too.

Shark’s Fin Soup
A traditional soup course that’s eaten with vinegar. The server didn’t pour the vinegar into the soup though (coz not everyone likes it) so we helped ourselves.

Baked Fish Head with Cheese
I believe the fish was battered and deep fried first before being put into a salamander and grilled to melt the cheese. This is my favorite dish of the night – I find that I like fish more and more as I get older. This wasn’t the case in the past, actually I don’t think I’ve eaten fish willingly before my mid-20’s (except for stuff like smoked salmon). The fish goes well with the cheese, the latter imparts a pleasant umami component.

Duck Two Ways
The right side is a classic Chinese roast duck and the left side is a braised duck. I thought the duck should have been rendered a bit more but the plum sauce was good.

Braised Sea Cucumber
This medley contains sea cucumber, Pacific clams and razor clams arranged over fu chuk (tofu skin) and broccoli bordering the side. It’s another established dish in the Chinese wedding dinner repertoire. I’m quite fond of stuff like this – anything from the sea would catch my fancy nowadays.

Deep Fried Prawns
This is a huge prawn but unfortunately I was quite full at this point so I only had one. I was very impressed with the size of the jumbo shrimp.

Red Bean Pastries Two Ways
I thought this was a very clever implementation – both the desserts are made using red beans but one of them is deep fried into thin pancakes and the other has a mung bean filling and is stuffed into a mochi-type casing. The former is a traditional Chinese festive dessert.

Fresh Fruits Platter
Oh, how I’ve missed eating plum powder! Haha. This is the stuff we used to get with sliced guava and it always seemed to be in short supply when I was a kid. It’s very more-ish and goes very well with all sorts of fruits.

I managed to take a photo with my dad and the bride and groom after the dinner. Thanks for having us Yih Wen and Kian Mun! 🙂

I went with my dad early in the morning and took a photo with the bride. Yih Wen is my cousin, my uncle’s daughter.

I had the traditional mee sua (longevity noodles) with chicken soup.

I was told to light it up just before the groom’s delegation came.

These are all my cousins. They are the gatekeepers keeping the groom out until ang pows (red packets) has been distributed and questions answered in a satisfactory manner.

My uncle, the bride’s dad, led Yih Wen down from her room…

…and the groom went down on bended knee to present the bride with flowers.

There was the exchange of rings… A great choice if you are looking for something more striking in an engagement ring are the coloured diamonds as they just look amazing and stand out so are much more noticeable.

The bride and groom then attempted to kiss for a full minute.

The customary tea service was done by Noble.

The bride and groom basically bow three times to people in their lives (these are the parents of the bride) while serving them tea.

My dad, being the brother of the father is pictured here.

We all took a group photo together…

…and the bride left for the groom’s place.

Since the groom is from Ipoh, there’s no house to go to – they went to his hotel room instead.

It’s a symbolic gesture to mean the daughter has officially left the care of the parents.

The car is backed out and in three (3) times…

…and they’re off! Congrats Yih Wen and Kian Mun! 🙂 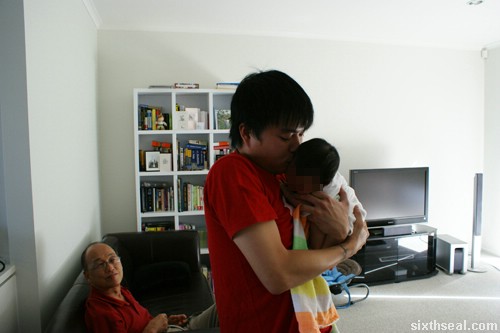 I love this pic taken while I was in my sister’s place in Auckland, NZ a few weeks ago. I was carrying my niece and kissing her while my dad looks on. My sister is a bit of a private person (she is my polar opposite) so I am applying mosaic on her daughter (though to what purpose I do not know since all babies look alike).

She smells nice. She has a milky scent and it still puts a smile on my face when I think about her. 🙂