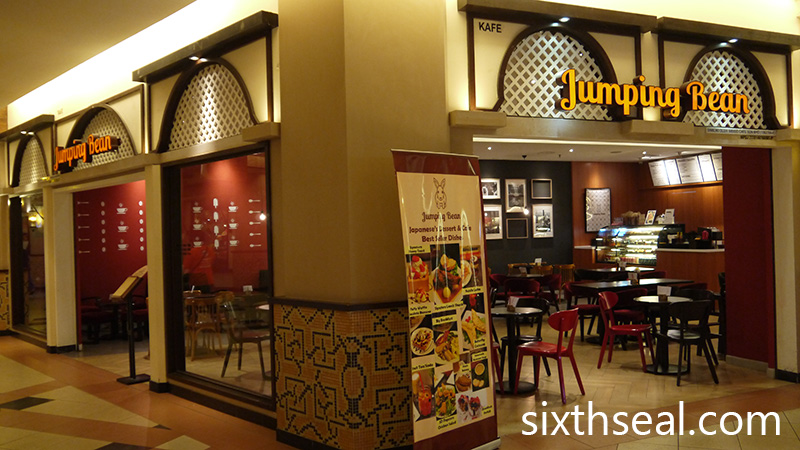 We just had breakfast this morning at this “Japanese style café”. My better half actually wanted to go have xiao long bao but I was craving for my morning cup of coffee and she conceded to go with my choice instead. <3 Jumping Bean Café sounds like a good of a place as any to load up on caffeine and I needed it for our 8 hour Chinese New Year shopping marathon. 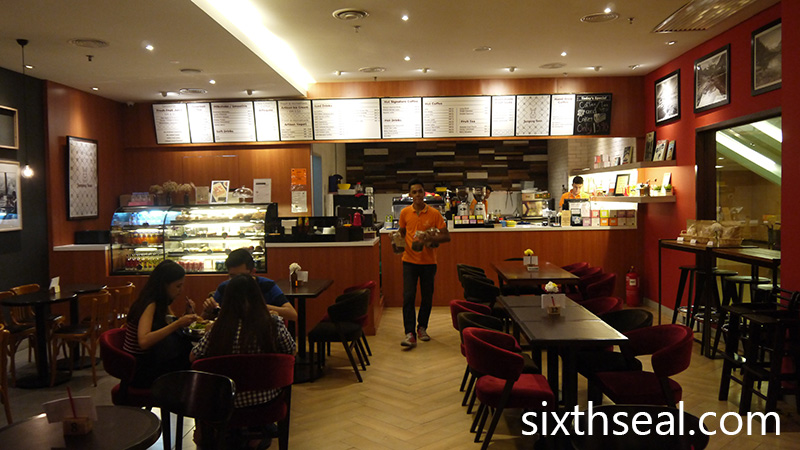 The café was quite deserted when we were there and I know this particular lot in Sunway Pyramid has gone through a lot of management and café/restaurant changes. I thought it might be wise to eat here before it closes down.

This happens a lot with us, especially in the ultra-competitive Dataran Sunway area, a prime example would be Flaming Melt (shuttered up 3-4 months after opening). 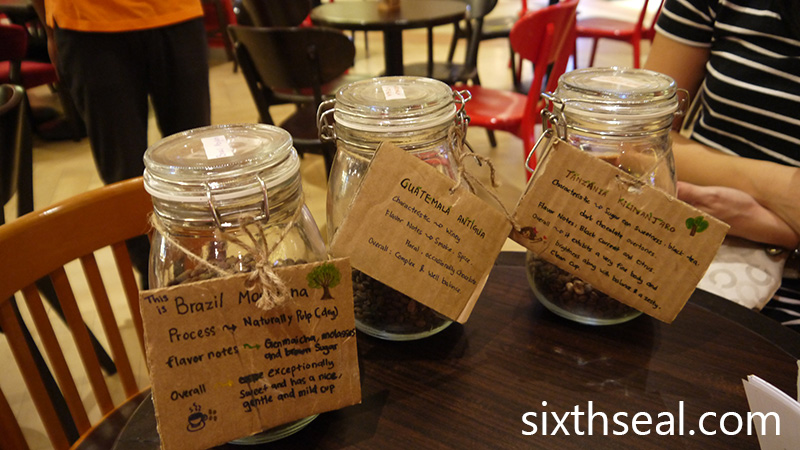 Tanzania Kilimanjaro Siphon Single Origin Coffee (RM 15)
A place called Jumping Bean better had good coffee and I wasn’t disappointed. I asked about their Siphon selections and was presented with a Brazilian roast, Guatemala Antigua beans (suspect this is the same one that Starbucks offers) and coffee from Tanzania Kilimanjaro. I like how they actually take the trouble to bring you the coffee beans for choosing. 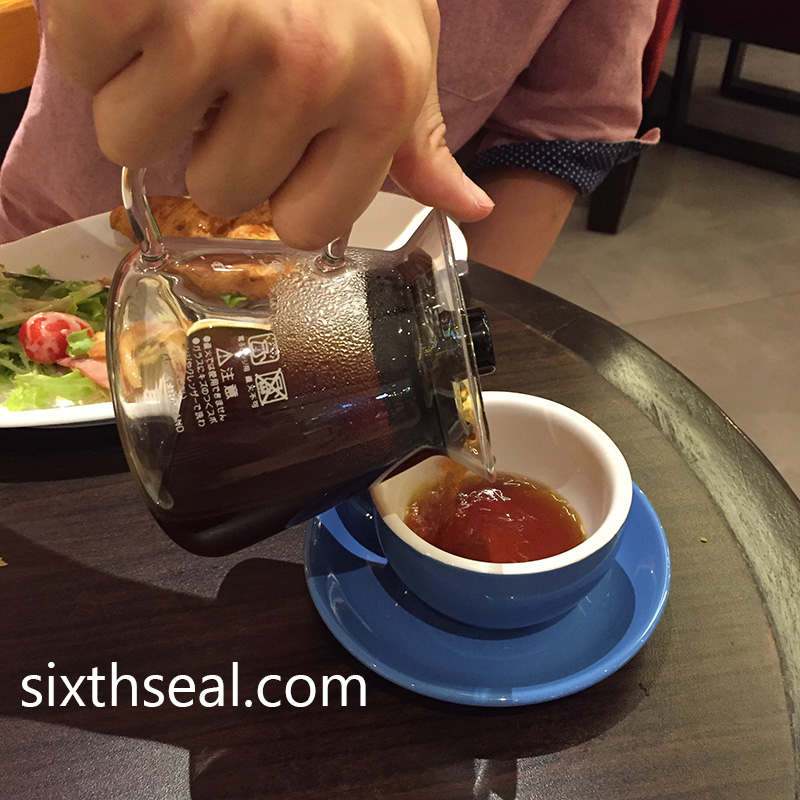 I chose the final one and it was a good cup of coffee. I would have preferred the Siphon coffee system to be done at my table but I understand the constrains of space would have prohibited that since we ordered quite a lot. 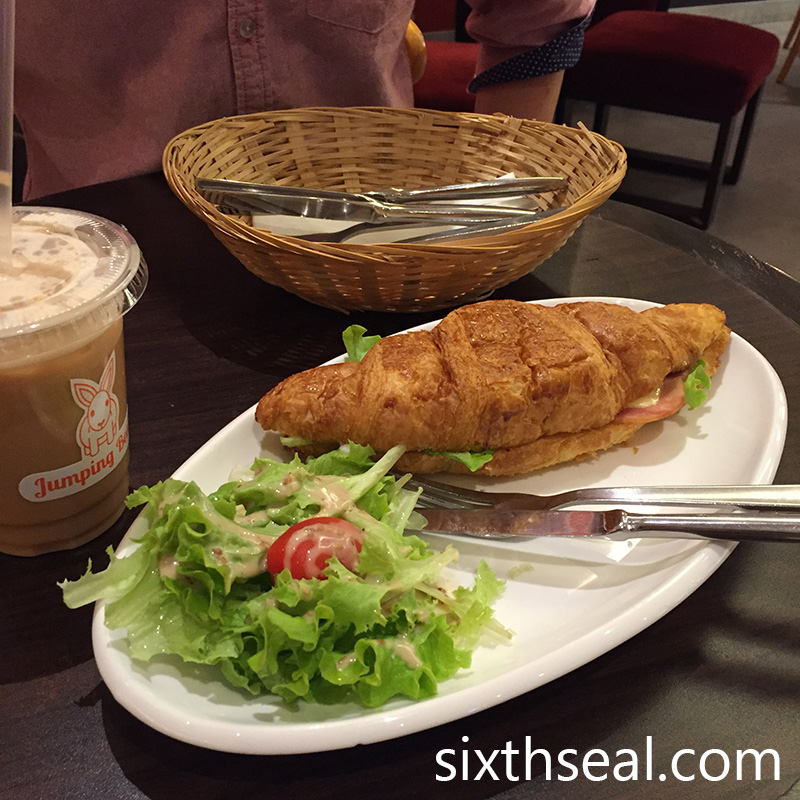 Turkey Cheddar Croissant (RM 16.90)
My dear had this buttery croissant filled with turkey slices and cheese. It’s rather good, the croissant is home baked. Also pictured is her order of Iced Royal Milk Tea (RM 12). The side salad is the same as mine, I believe they just make one large portion. Nothing special but the star of the dish shined. 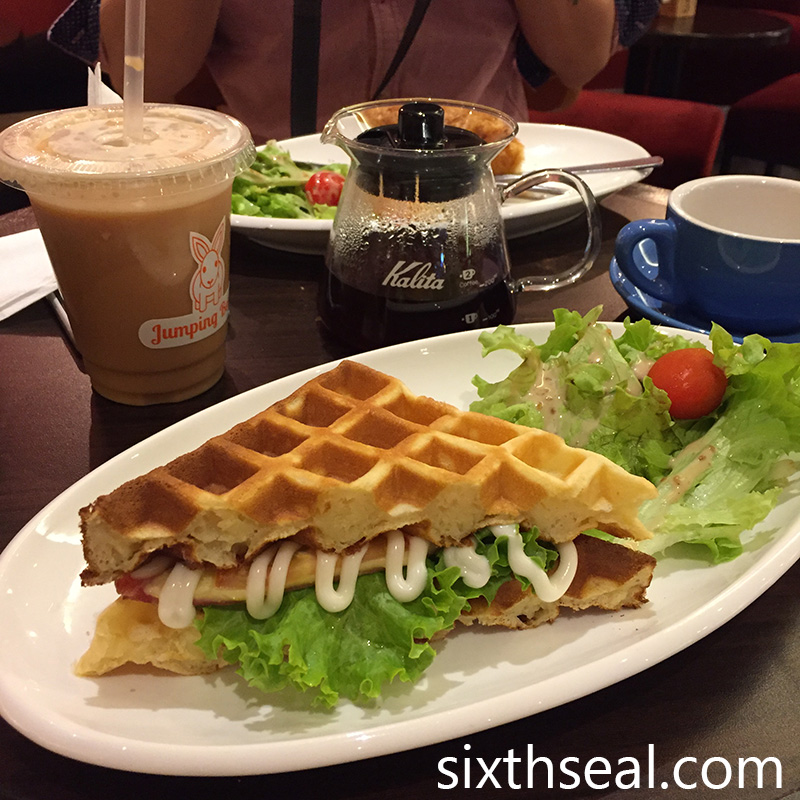 Waffle Breakfast (RM 15.90)
This was my order. It was described in the menu as the “best pair(ing) in the world” and I’m inclined to agree. I do like sweet, fluffy waffles filled with savory items. Mine had turkey ham, cheese and egg. It was good, if a little small, portion wise. 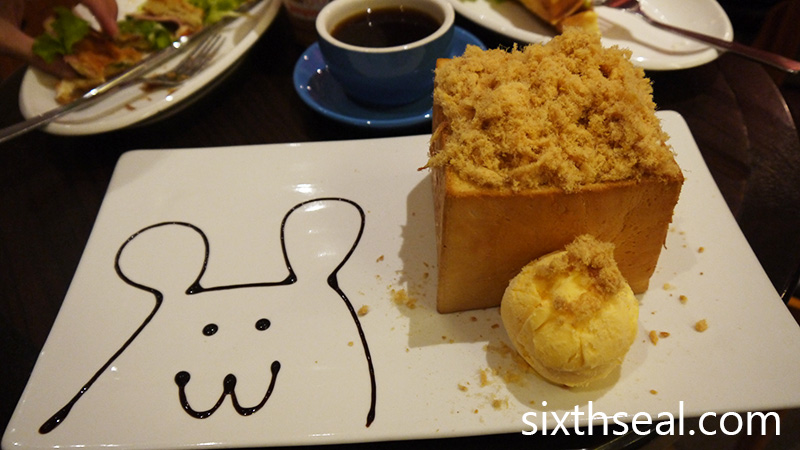 Chicken Floss Honey Toast (RM 19)
We were supposed to have the “Japanese inspired” Mix Fruit Honey Toast (RM 19.90) for dessert but I wanted to try the unique sweet-savory chicken floss honey toast instead. It’s one of those home baked square of bread deals, with the inside cut out and made into 3 x 2 slices of “toast soldiers”. They’re supposed to cut it even smaller, into a 3 x 3 x 3 matrix (from what I gather from the pictures) and I thought it was sloppy that they didn’t. 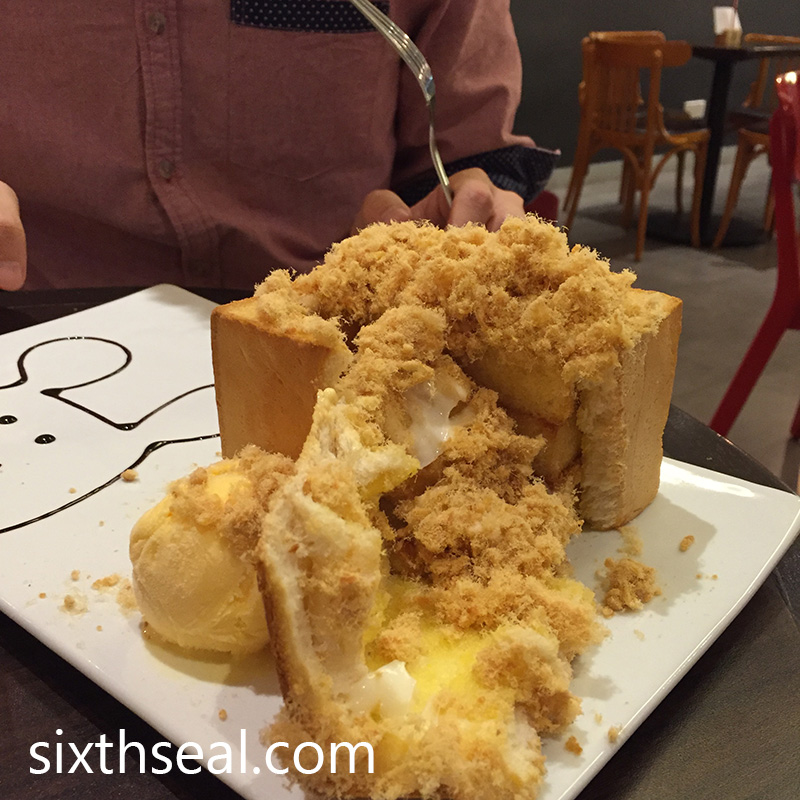 It didn’t taste as good as it could have, due to the thicker array of toast soldiers but I did like the honey and mayonnaise and chicken floss combination, especially with the creamy vanilla bean ice cream. The sweet and savory combination isn’t for everyone though – I ended up single-handedly finishing the huge dish – but it tasted nice to me. 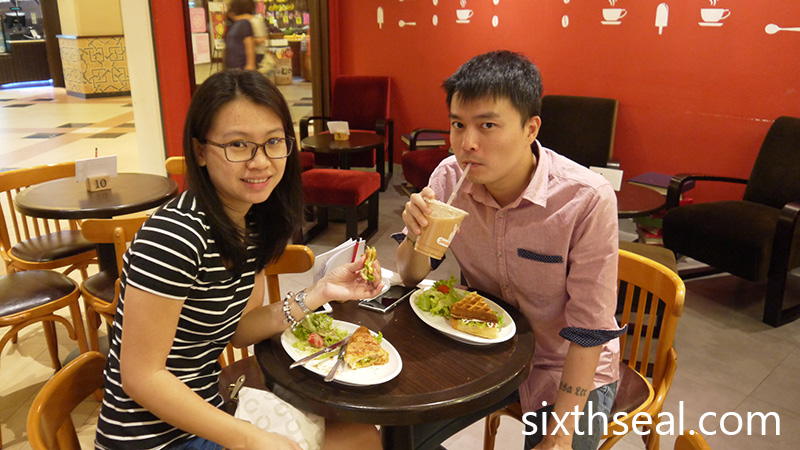 Jumping Bean Café is not a fully serviced café per se…there are paper chits on the table so it’s more like one of those chain kopitiam places, but since there weren’t a lot of people, the waiters came to our table to serve us. The bill cost RM 78.80 for the both of us. It wasn’t the best brunch we ever had, and it wasn’t the worst either. It was simply mediocre but saved by the fact that we were both really hungry. 🙂 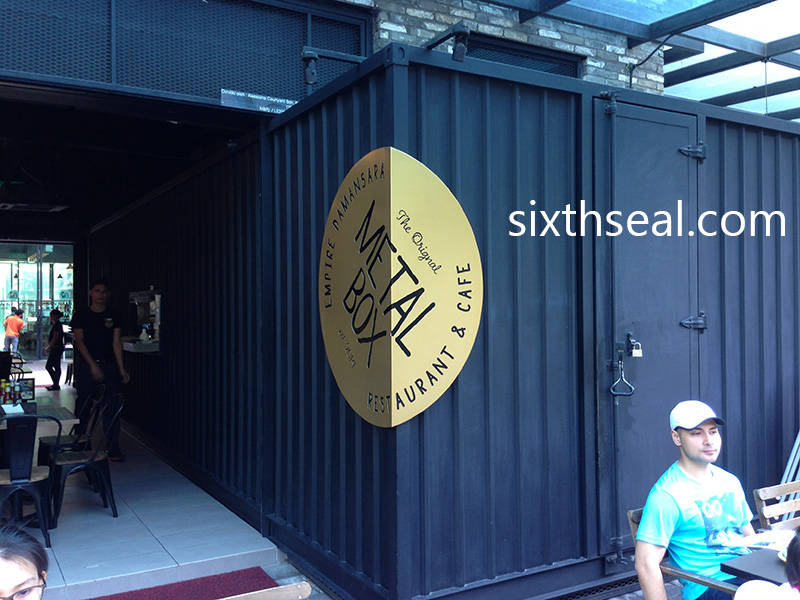 Metal Box Café has been generating a lot of buzz lately. Word is, the chef came from The Red Beanbag, the popular and perennially packed eating establishment in Publika. We popped over for breakfast and we were very happy with the food here. It’s a lot more vibrant compared to the (admittedly) bland stuff from The Red Beanbag. 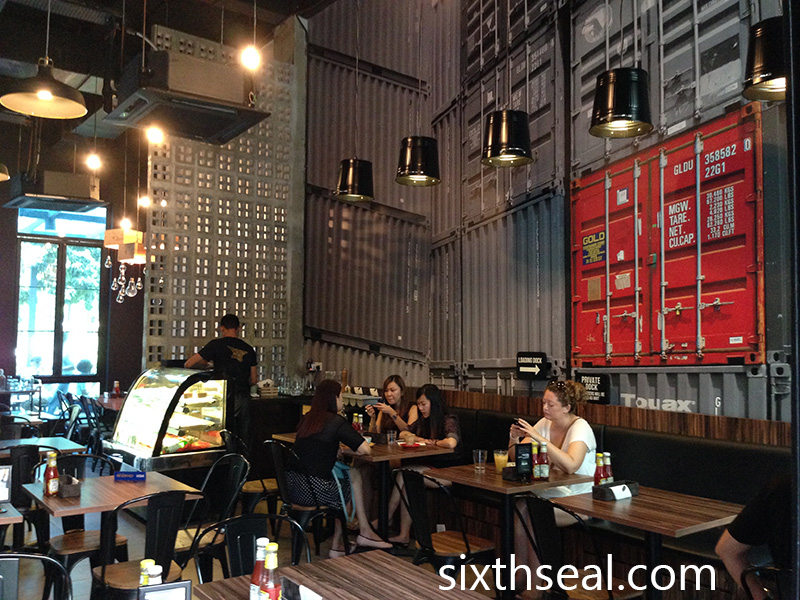 The interior of Metal Box is made to look exactly like the namesake – full of shipping containers. The industrial chic look is accented by the steel girders, faux metal container and pictures of a loading dock. Service here is prompt and friendly. We stayed for a while to chat while eating our dessert and didn’t feel pressured to leave despite the place being full. 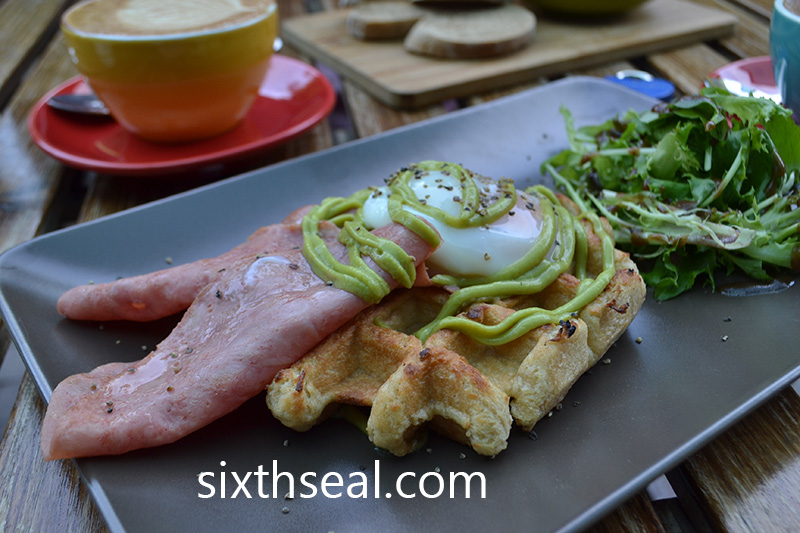 Incredible Waffle (RM 23.90)
My better half chose one of their new dishes. This is a crispy liege waffle served with guacamole, choice of beef bacon or turkey ham paired with garden greens and 68 degree egg (slightly higher than a 63 degree egg). I loved the texture of the waffle, it goes very well with the 68°C egg and everything is seasoned well. This place doesn’t serve pork but strangely has a lot of red wine and Guinness infused items/sauces on the menu. 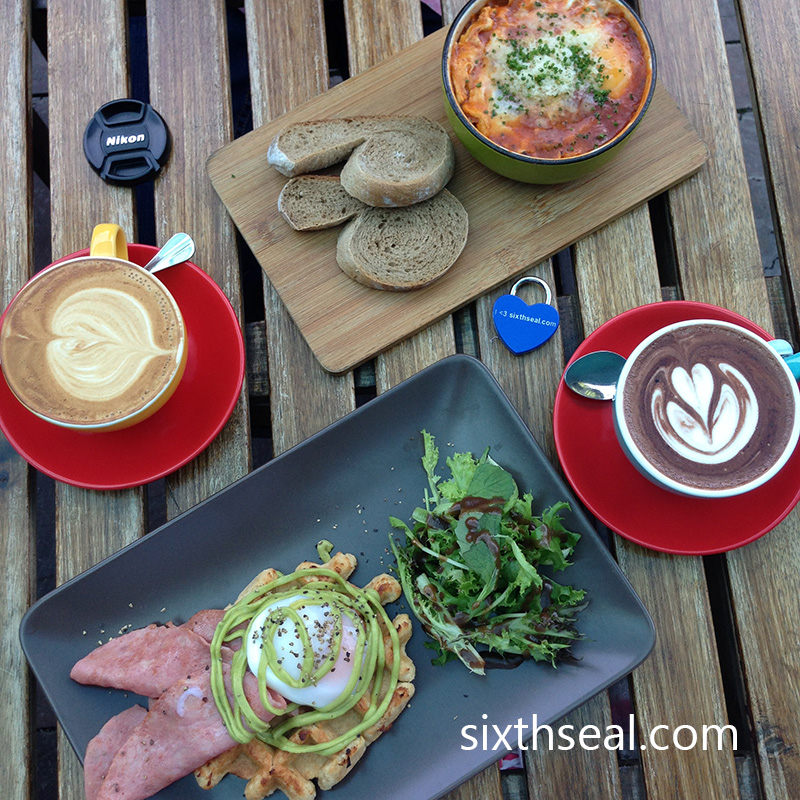 Metal-Box Baked Egg (RM 19.90)
I was craving for baked eggs and opted to have this. There are 2 soft baked free-range eggs in a pot with sliced smoked chicken breast, diced chicken sausage, potato & eggplant, homemade cannellini beans in tomato coulis baked to perfection. This is topped with freshly grated Gruyère cheese and freshly baked French sour dough on the side. I really liked the zesty flavors in this dish – the abundance of premium homemade ingredients really shines though too. 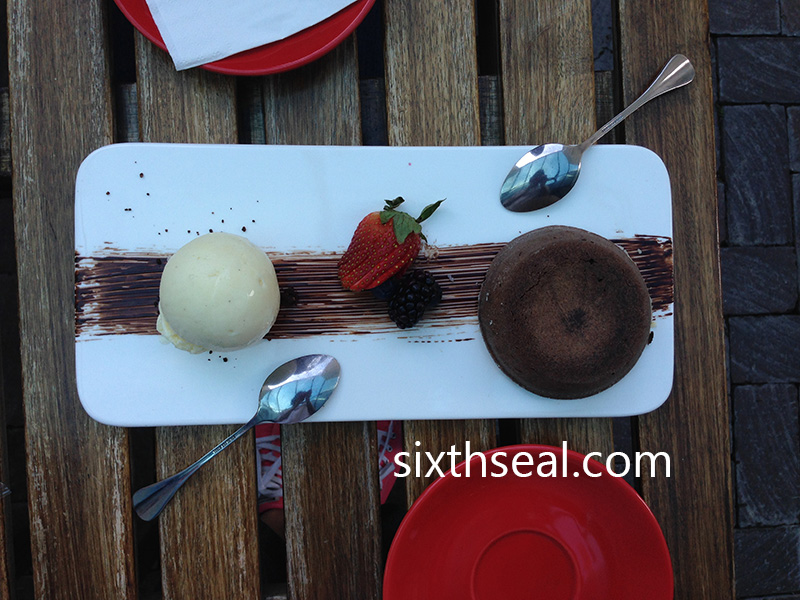 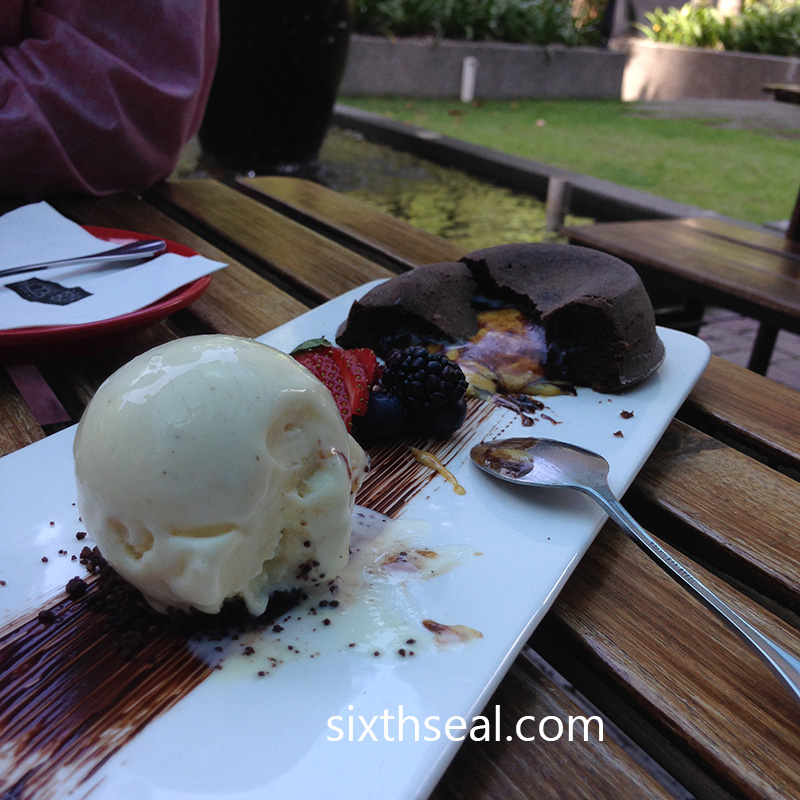 It goes perfectly, flavor wise and the quality vanilla bean ice cream (you can even see the small dots) is delicious. I would go again just for this. 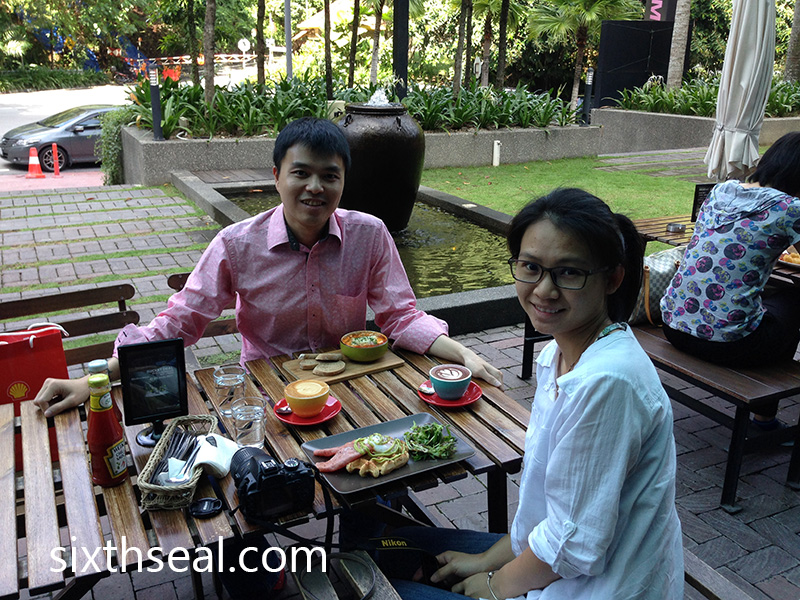 Metal Box Café and Restaurant is located at Empire Damansara and it looks like the most popular F&B outlet there. It can be very packed during weekends and if you want the best seats in the house, go for the al fresco tables at the back. There are green shrubs and flowing water to make your morning even more chill and relaxing. I highly recommend it, it’s the right combination of great food and awesome ambience. 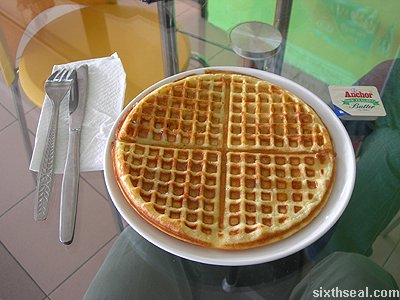 I had the best waffles with butter and honey (which is available at most ice cream attachments e.g. the defunct Frostee Boy to SugarBun outlets) while I was in Sibu. SugarBun seriously has the best waffles in town – I don’t know if it’s nostalgia (used to eat heaps of it during my youth) but it’s good. 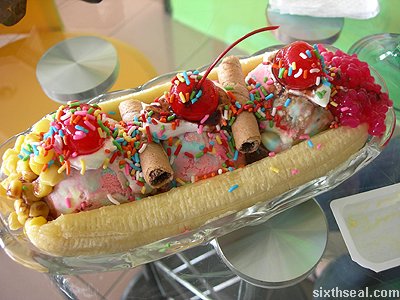 It goes best with a banana split (which has degraded in quality but at least it doesn’t come with stock vanilla ice cream, but flavors of your choice now). 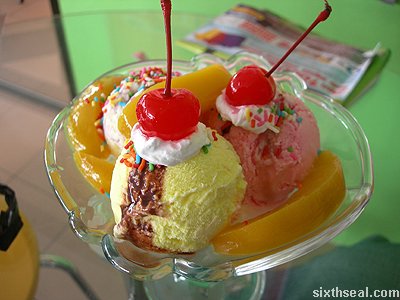 The Peach Paradise is a great sundae as well…can’t beat canned peaches when you’re craving for sugar. 🙂