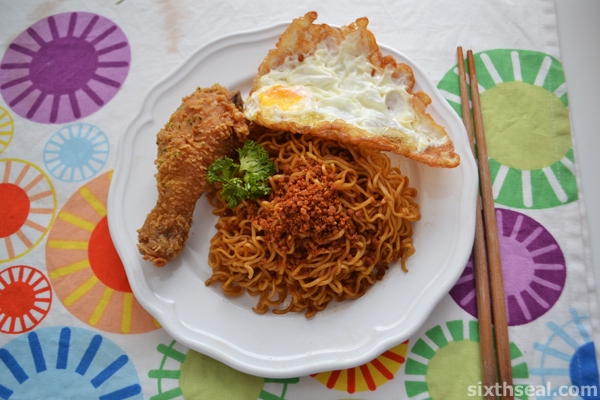 I’ve always been a huge fan of Mi Sedaap since it came out. I’m not the only one either – I’ve seen many people at the hypermarket aisles grabbing packets of Mi Sedaap and/or asking their parents to get that particular brand. In fact, all my friends living in Australia wants me to bring over Mi Sedaap whenever I’m visiting down under! 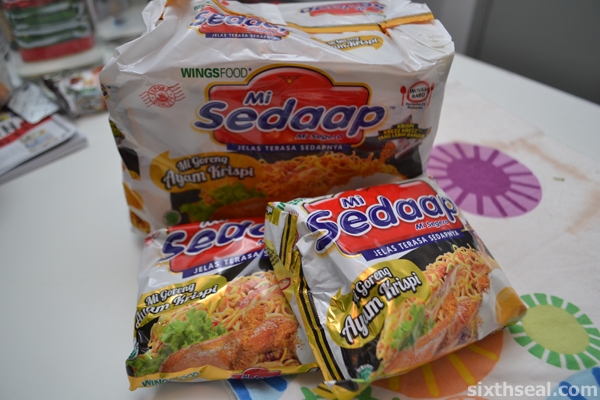 I think a lot of this is due to the awesome springy noodle texture and the generous 91 gram packs. This is very unusual – in a good way. You’ll notice that no other commercial instant noodle manufacturer has such a large serving – it’s usually 79 grams or less. I can barely manage to eat 3 packets while I can easily eat 3 packets of any other manufacturer. 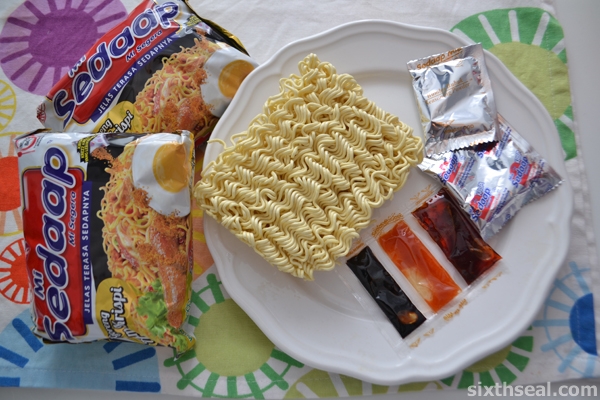 The other important bit is in Mi Sedaap’s flavor sachets – there are five (5) of them in total! There’s the 3 liquid ones – chilli sauce, soy sauce and flavored oil, plus the 2 dry ones – powdered flavor and the dried onions. It’s important to mix everything except the dried onions, that one goes in last, so the crispy element is there.

Now, with the new Mi Sedaap Goreng Ayam Krispi, all these wonderful characteristics are amplified! 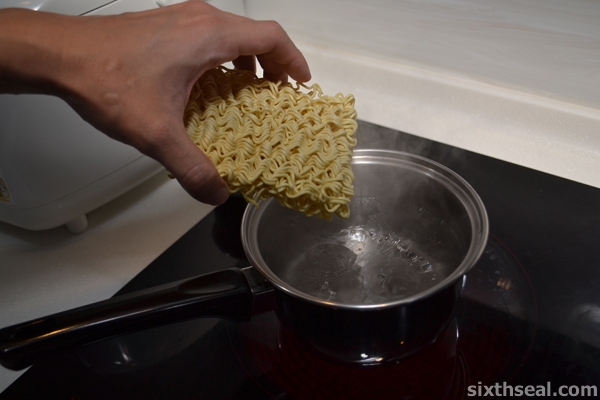 I just tried the new Mi Sedaap Goreng Ayam Krispi with fried drumstricks and it was awesome! You will need:

I first battered and deep fried the chicken leg and set it aside to rest. You can do this in any type of oil except EVOO (extra virgin olive oil) since the flash point of EVOO is too low for deep frying tasks like these. 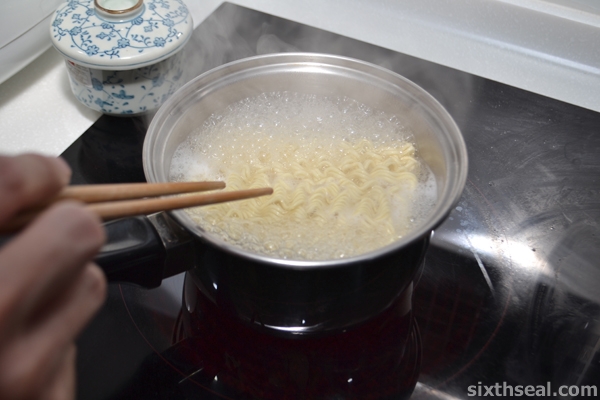 I also fried a sunny-side up egg before I set a pot to boil for the Mi Sedaap Goreng Ayam Krispi. 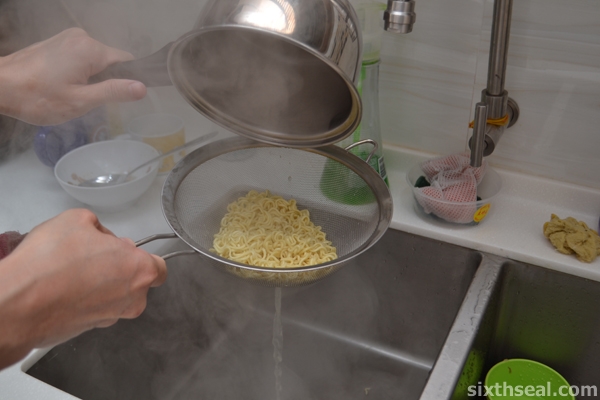 The Mi Sedaap Goreng Ayam Krispi just needed a quick 3 minutes in hot water before it’s tossed in all the flavor and oil sachets (except the special Krispi Krezz Krezz bits). 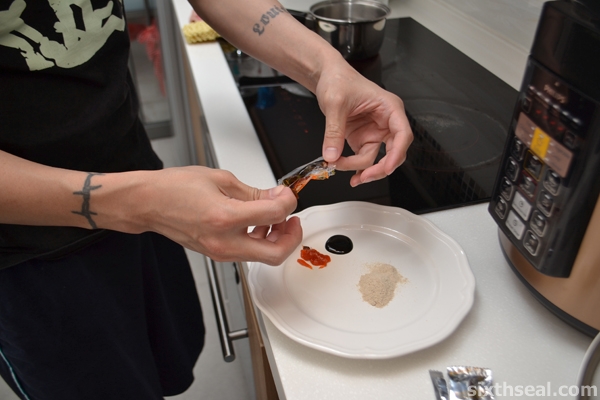 Pro tip: It’s highly important that the Krispi Krezz Krezz sachet is only opened and poured on top of the noodles after it’s tossed so that it doesn’t get soggy. It’s meant to provide a crispy contrast to the springy noodles and it’s delicious! 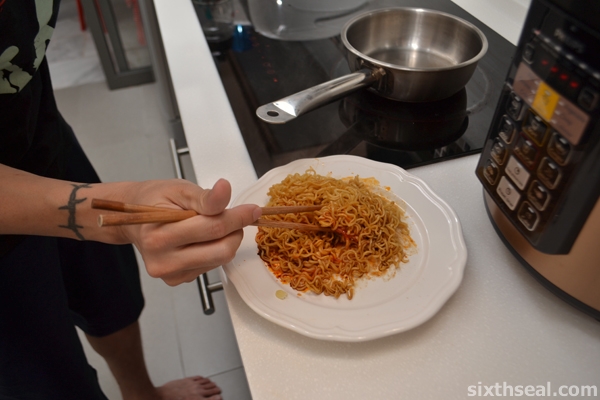 I love the Krispi Krezz Krezz bits! I feel that all the other “Mi Goreng” type competitors are sorely lacking in both getting the flavor profile right and in the crispiness of the fried onions. You’ll notice that once you go Mi Sedaap, you’ll never go back coz the flavor sachets are amazing! It really makes the noodles taste like real Mi Goreng with its robust and full flavors. 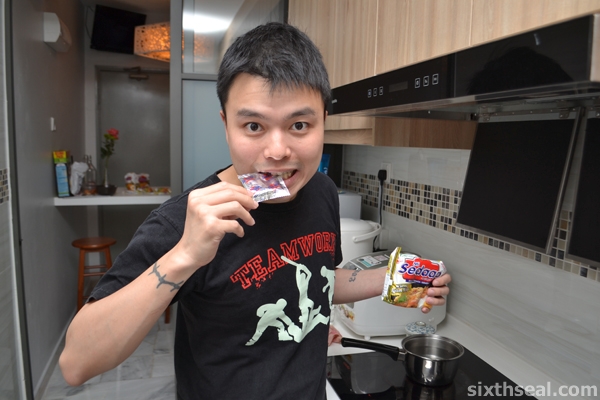 I also personally like the springy texture of Mi Sedaap’s noodles. I consume a lot of instant noodles and I can wholeheartedly endorse Mi Sedaap’s noodles as the best! Just follow the timing instructions and you’ll never get soggy or “gritty” (from uncooked flour) noodles anymore. 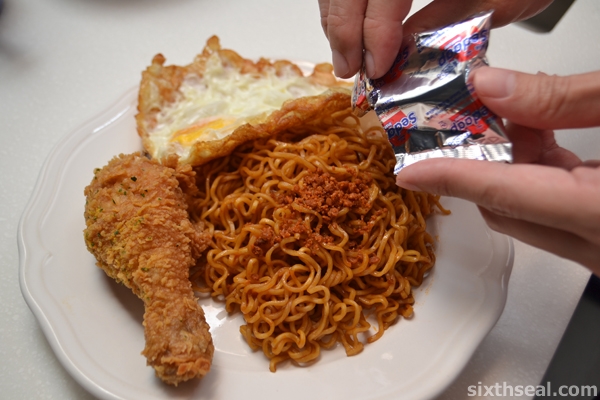 The latest Krispi Krezz Krezz Yang Lebih Rangup bits brings this to a whole new level! It tastes like fried chicken has been added to the noodle. I’ve always been disappointed with other manufacturers fried onions – they’re either soggy or flat, there’s completely no crunch to the fried onions, which is a very important component in Mi Goreng. The texture contrast that the crispy Krispi Krezz Krezz bits bring to the table (no pun intended) is amazing. 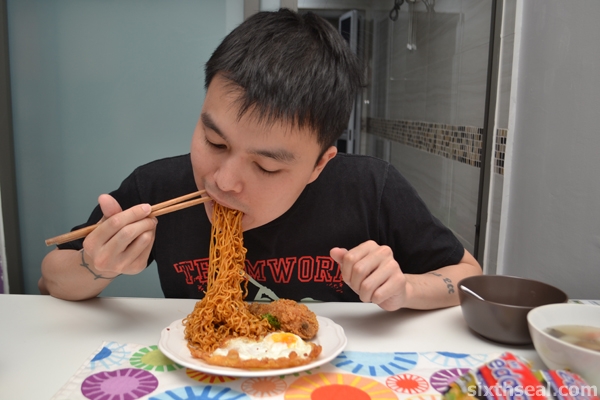 The new Mi Sedaap Goreng Ayam Krispi is a huge improvement that tastes like all Mi Goreng type noodles should – check it out and see what I mean. Remember to put in the Krispi Krezz Krezz bits in last, a lot of people put it in together with the rest of the ingredients prior to tossing due to laziness or ignorance and that’s wrong – it’s meant to be crispy, so think of it as a topping. 🙂