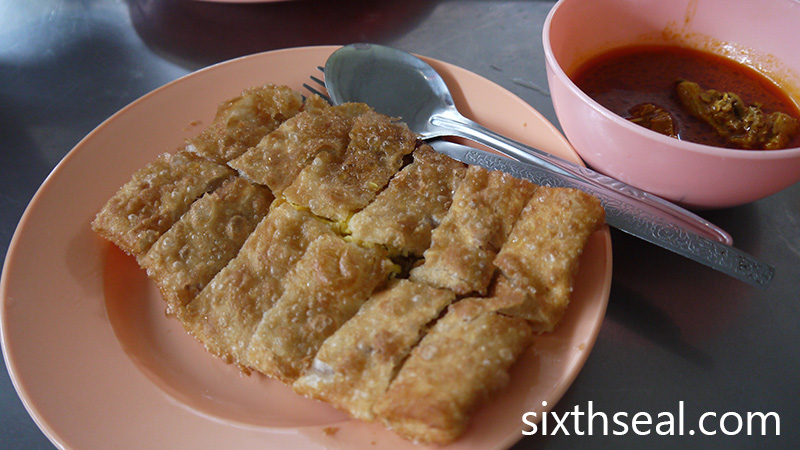 I first heard about this wonderful creation a couple of months back. Fried roti canai is a staple in Kapit and one of those quirky inventions that can only take hold in a small town. I decided then and there that I must personally investigate this dish and planned to go on a trip downriver. Kapit is a small town that’s only reachable by boat – you can’t drive or fly there. 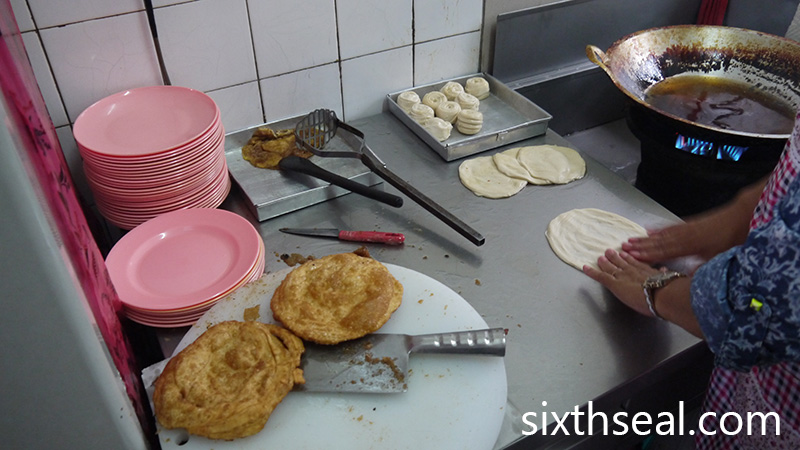 The journey to Kapit takes 3 hours via express boat from Sibu and I went down with my bro Eddy for a night. It’s not just to eat roti canai goreng, but that certainly was a highlight (at least for me). Haha. The stalls in question are located at Gelanggang Kenyalang (loosely translated as Kenyalang Court). It’s an assortment of stalls under one roof, an indoor food court of sorts. 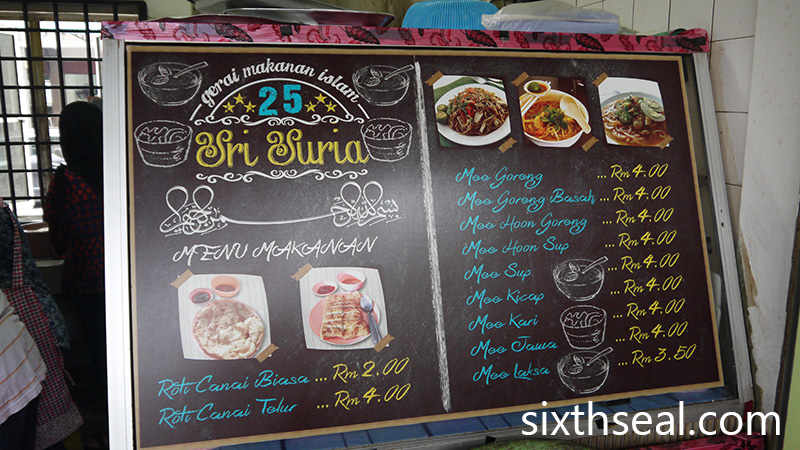 There is one stall that’s famous for their roti canai goreng but everyone essentially does it the same way nowadays. I went to Stall #25 Gerai Makanan Islam Sri Suria and the kind lady manning the frying pan told me about how the roti canai goreng is made. I was quite surprised to find out that it’s not grilled first – the raw dough of the roti canai is slipped into boiling hot oil and fried straight away. 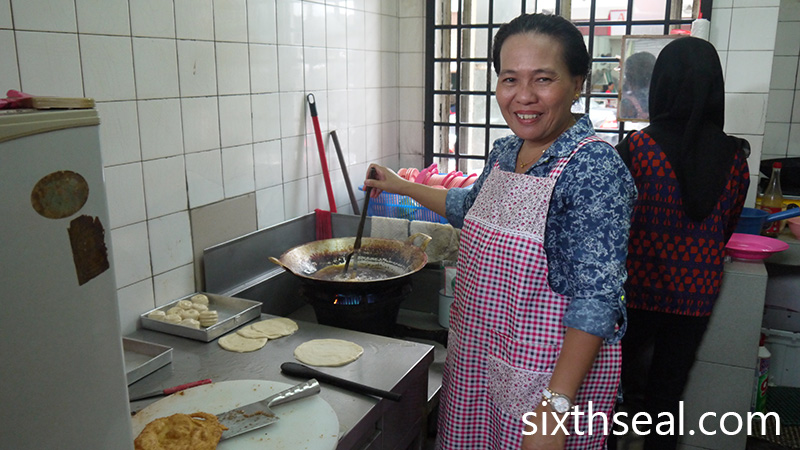 The same treatment is done for the roti canai telur goreng (fried roti canai with egg). The egg is folded into the dough and deep fried till crispy. It’s served Sarawakian style with curry chicken and a sweet sambal sauce. The latter is truly local, I’ve never had this saccharine sambal anywhere else except at home. 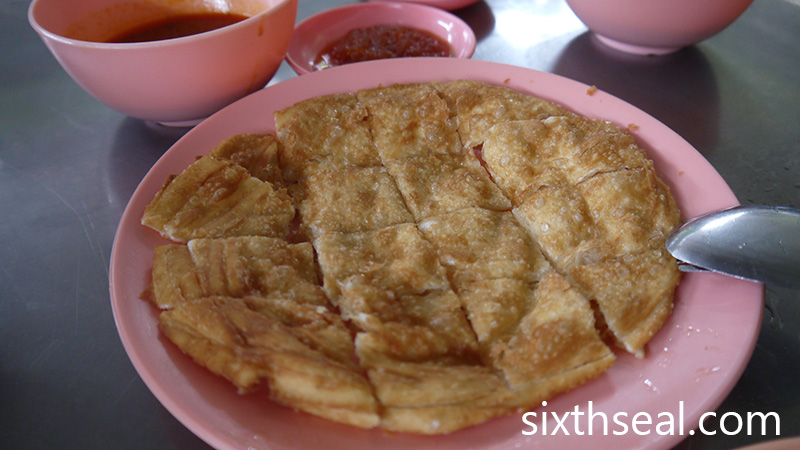 The roti canai goreng costs RM 2 and it’s plain roti canai that’s been deep fried. The dough is cooked through, with a crispy exterior. You can taste the sweetness of the dough by picking up the sliced pieces and munching on them. It’s very satisfying! 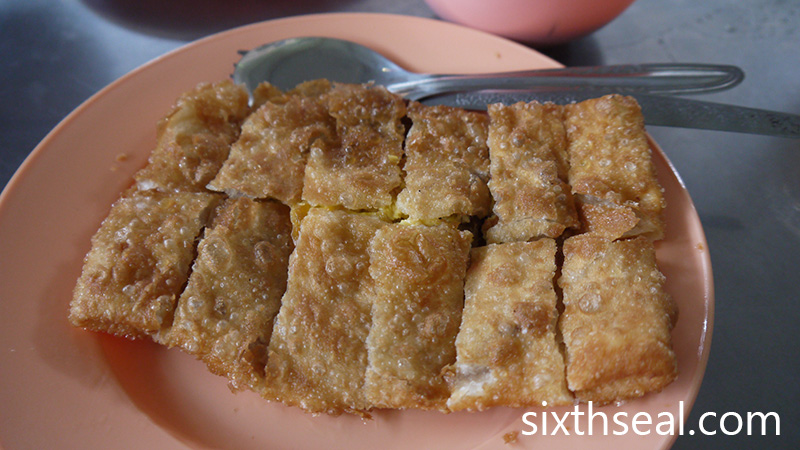 Roti canai telur goreng comes in at RM 4 and it tastes totally different with an egg. I was surprised at how distinctive the two are! This one has a pockmarked surface (from the hot oil) and it tastes a lot more savory than the previous one. 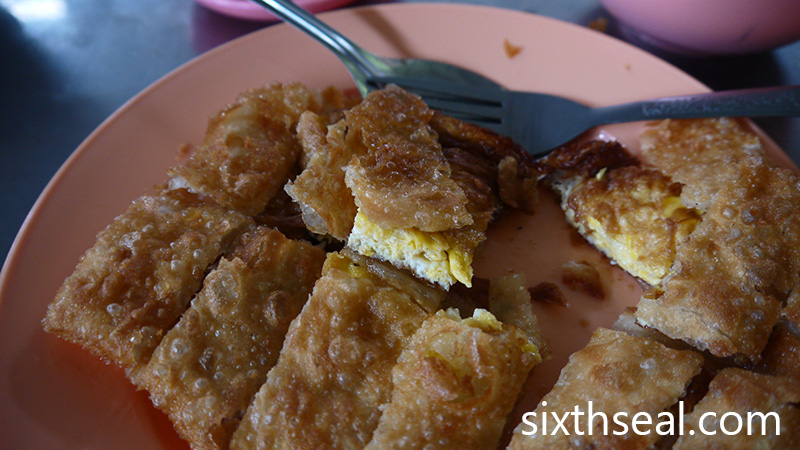 Here’s a look at the inside. The egg is perfectly cooked from the heat of the cooking oil. The funny thing about the two roti canai variants is that the egg version is rectangle in shape while the plain is round and circular. 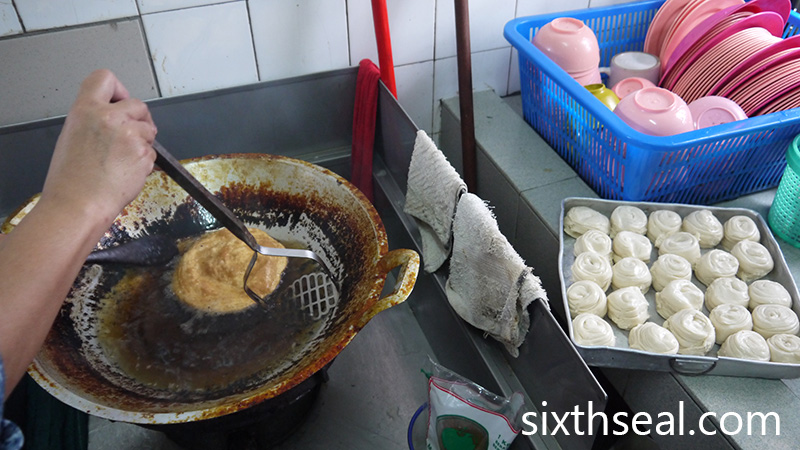 Roti canai goreng has a distinctive texture that’s very moreish. I could eat several of them, although it’s probably not wise to do so as it’s quite oily and I feel that excessive consumption would probably be bad for your cholesterol. 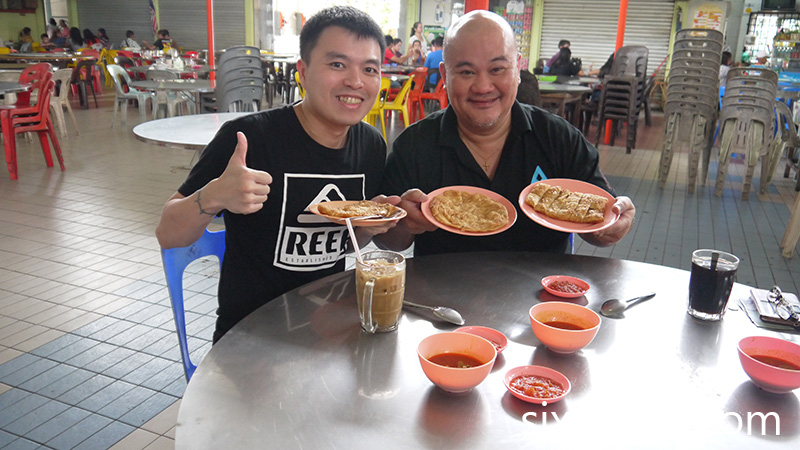 This is definitely worth a try. I’ll come again just to eat this! You can only find it in Kapit, so if you’re ever in Sarawak and looking for something different, take a boat here and eat their famous roti canai goreng! 🙂