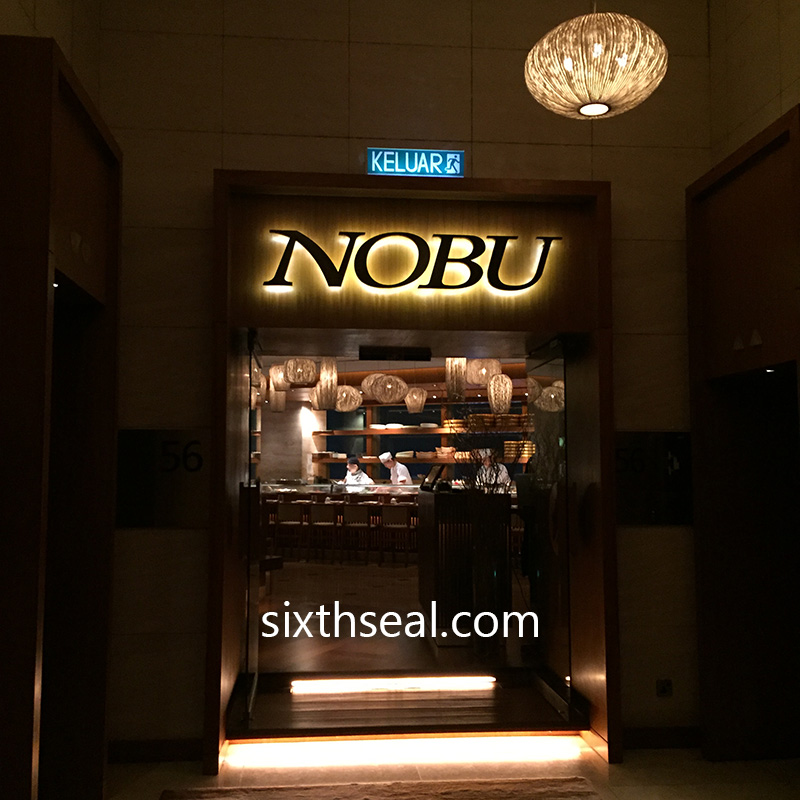 My better half made reservations at Nobu KL for my birthday dinner. Nobu Kuala Lumpur is located at the 56th floor of Petronas Twin Towers (Tower 3) so it has an amazing view of the city. We managed to get a table for two by the window and the panoramic view of the sun setting over KL made for a very nice and memorable dinner. 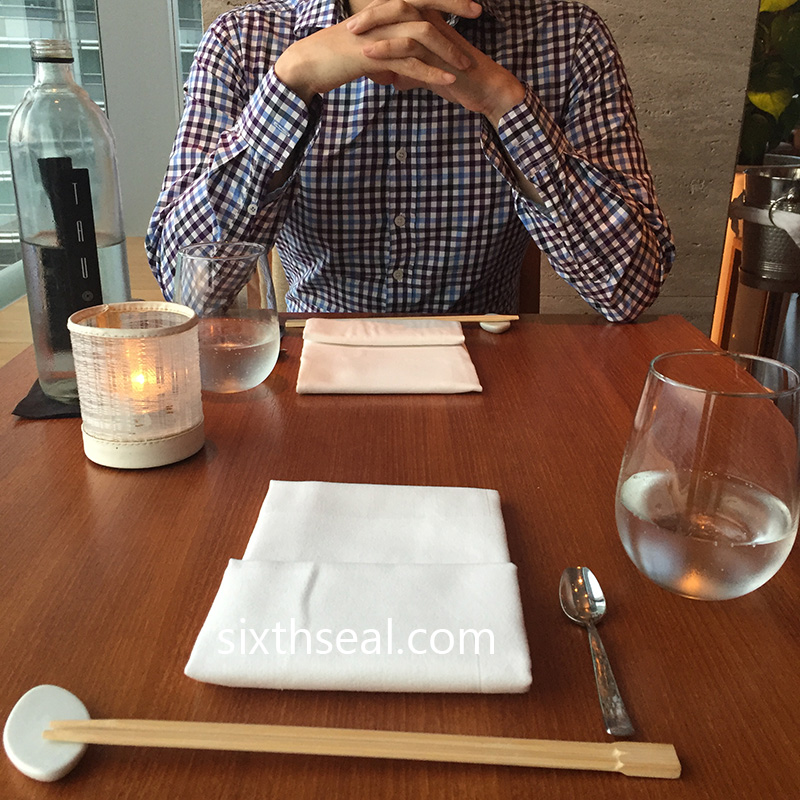 There are two types of omakase at Nobu KL – Nobu Signature Omakase (RM 385) is a selection of their most popular dishes and the Special Omakase (RM 455) is the “real” omakase, which consists of specially made dishes by the chef which you can’t find in the regular menu. The latter changes daily and contains off-menu items so I went with that. 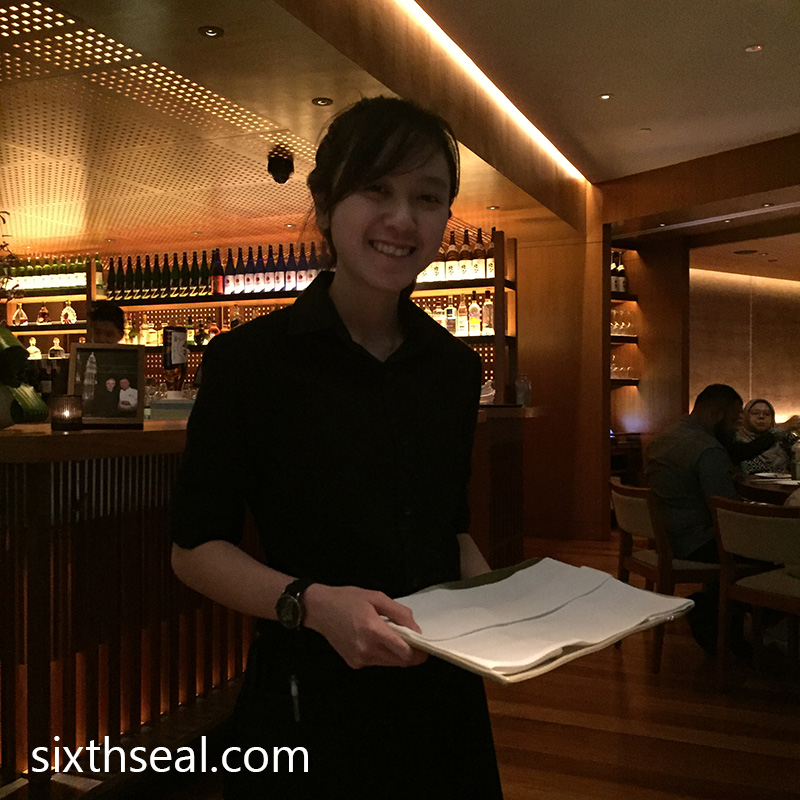 They also have a 5-Course Omakase (RM 280) which is only available from 6-8 pm on Sunday and Monday. The regular omakase menu has 7 courses. My better half opted for this coz she thought she wouldn’t be able to finish a full omakase. The friendly waitress served us with a bottle of Tau Sparkling Water (RM 38) as soon as we were seated and service was attentive without being intrusive. 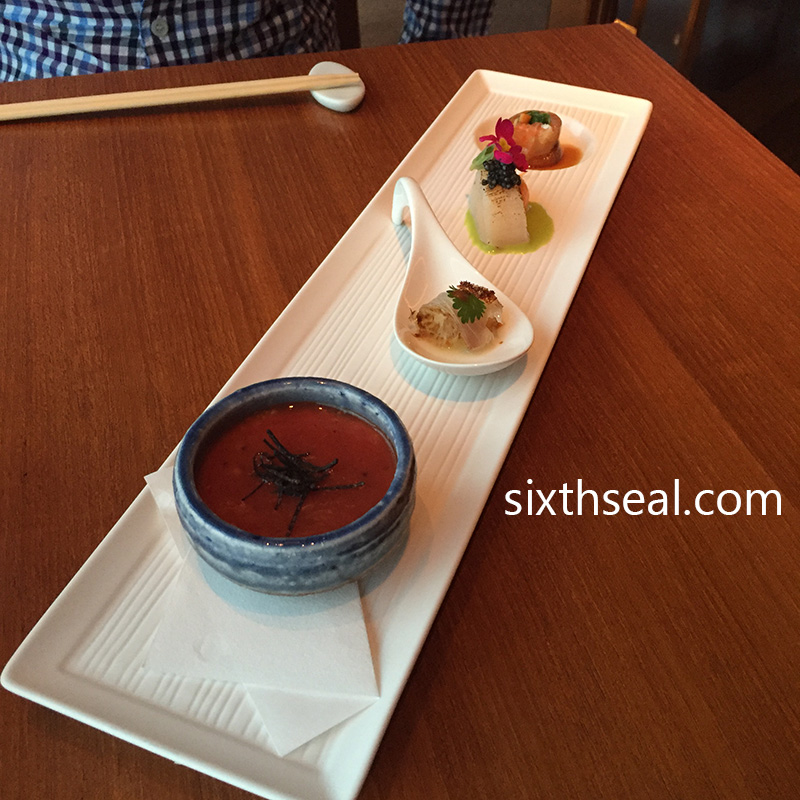 Cold Appetizers
The omakase follows the format of 2 cold entrées, followed by 2 hot entrées, with 2 mains and a dessert to end everything. This is the first course with four (4) separate bite-sized or larger dishes. I’ll write about them individually, from left. 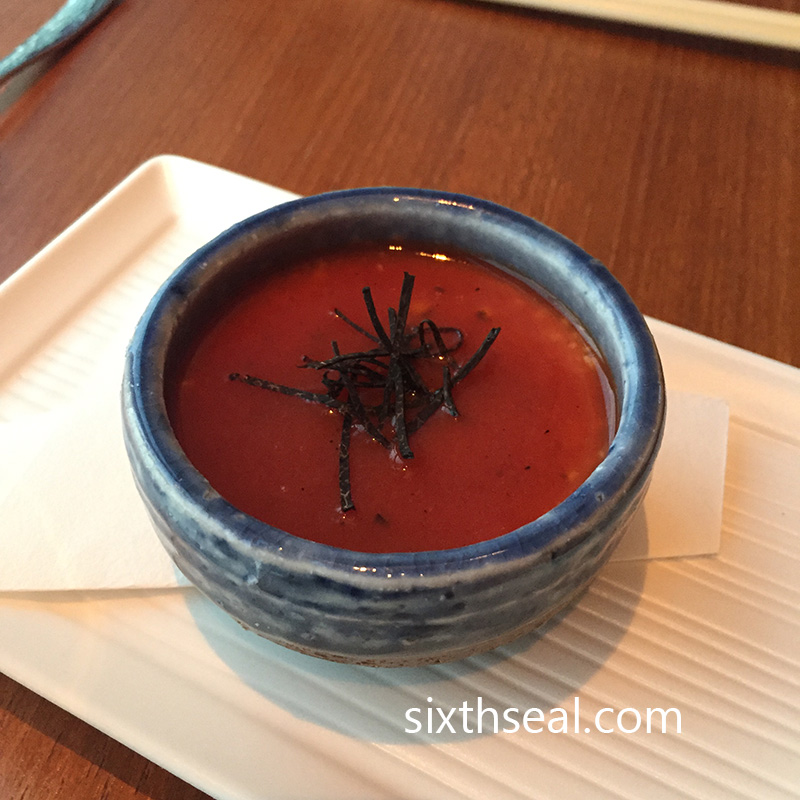 Chilled Tomato Chawanmushi with Fresh Truffle
I really enjoyed this one. The waitress helpfully suggested the eating order so the flavors would go from mild to moderate and this is meant to be the first appetizer. It was super refreshing – the chilled chawanmushi and the acidity from the tomatoes was perfect for the hot nights we’ve been getting. There was a fair bit too, so it’s not just minute portions. 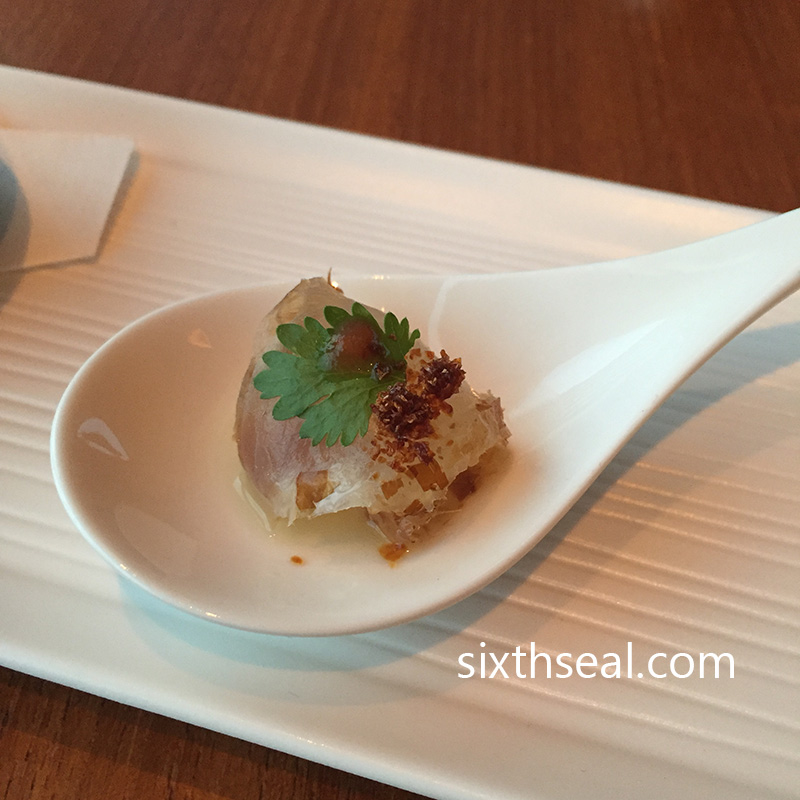 Whole Fish Tiradito with Yuzu, Rocoto and Coriander
Tiradito is a Peruvian raw fish dish which is somewhat similar to ceviche but with a more Japanese influence. It’s quite unusual since the acid marinate is not overwhelming so you can still taste the rawness of the fish. There’s also a hit of spiciness from the rocoto at the end. I liked it. 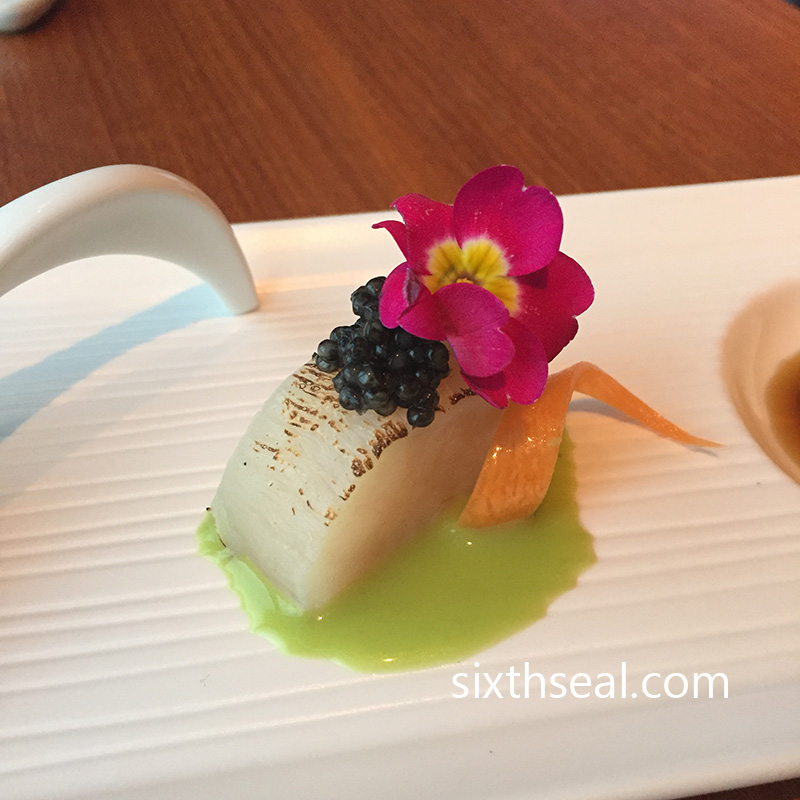 Pan Seared Scallop with Jalapeno Dressing and Caviar
This beautifully cooked scallop had a small helping of caviar on top. The salty sturgeon roe elevates the scallop and the edible flower provides a textural crunch to the dish (as did the sliver of carrot). 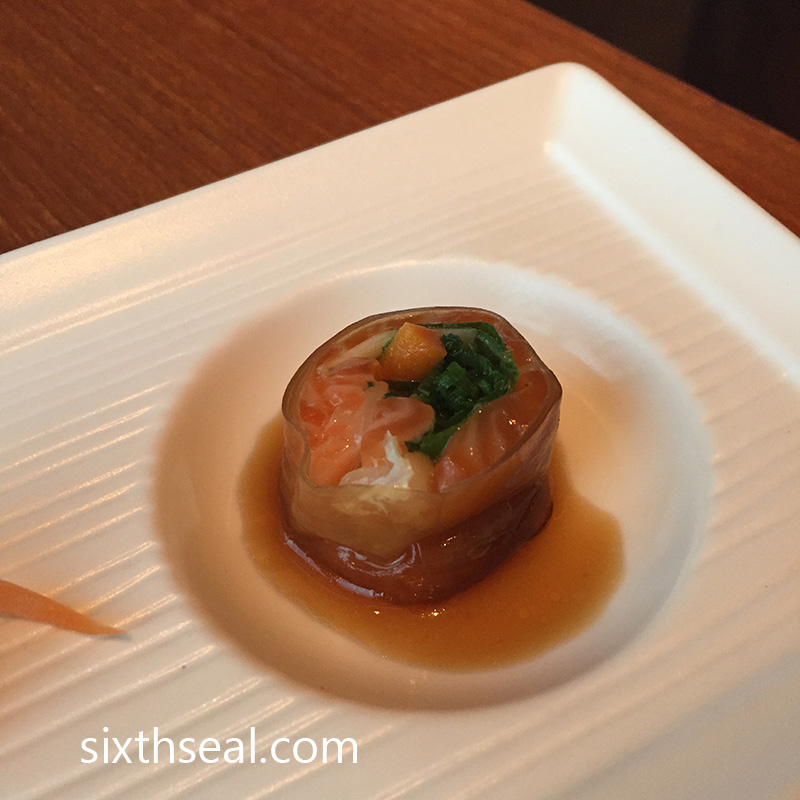 Salmon Kelp Roll
The simple sounding name is deceptive – this is a really complex dish! The raw salmon is rolled up into a sausage-like tubular package, with bits of kelp stuffed inside. I thought to myself, okay a salmon roll then, popped it into my mouth and nearly gagged from surprise. The combined textures and flavors are amazing! It’s my favorite appetizer. 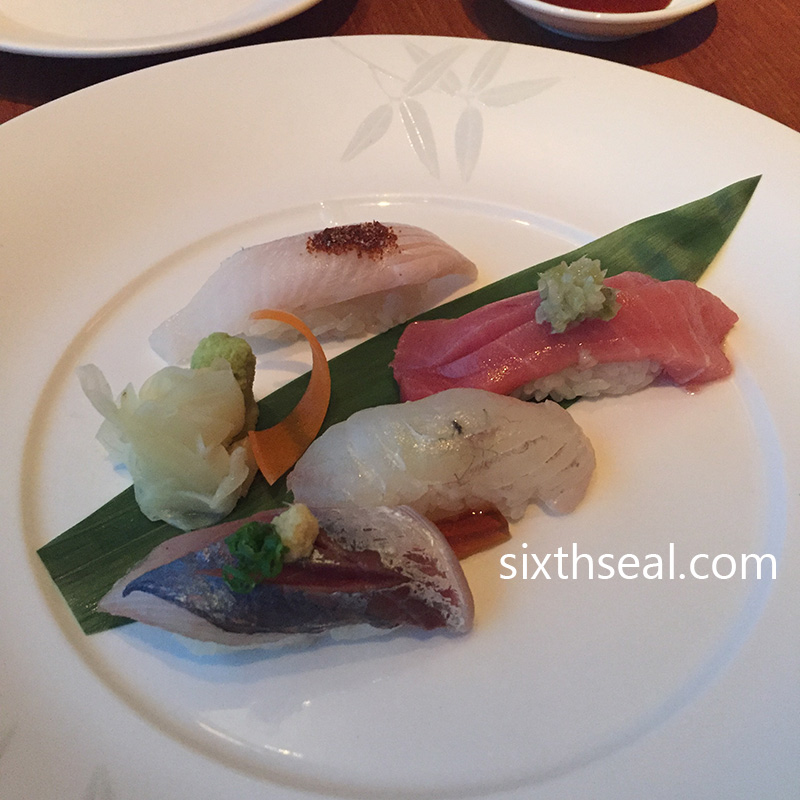 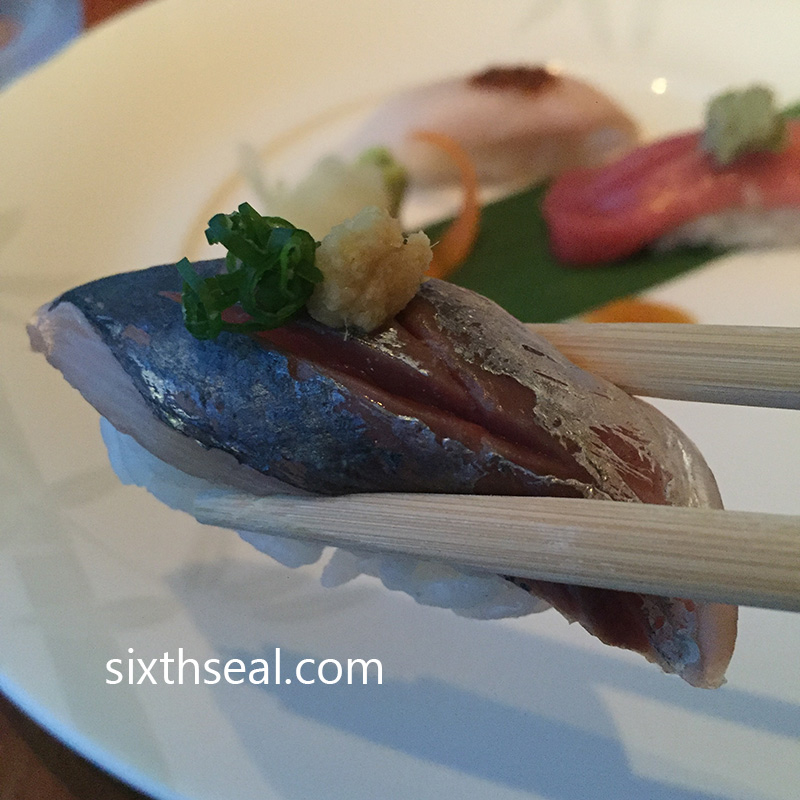 I liked how some of the sushi had unusual toppings like wasabi salsa on top. That’s a very Nobu-style dish, with influences from Latin America. 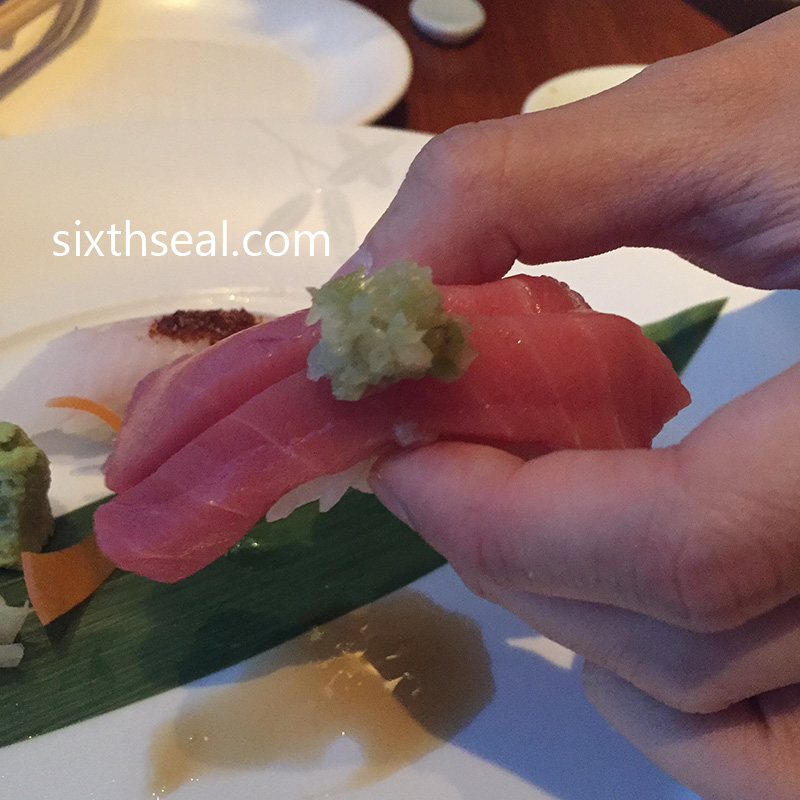 The otoro and engawa can’t compare to the superb sushi we had at One Star Michelin Isezushi in Otaru a few weeks ago, but this isn’t Hokkaido, so I can’t expect the freshness and quality to be the same. I wish the otoro was fattier though. It can’t hold a candle to the stuff in Sapporo but then this is Malaysia. 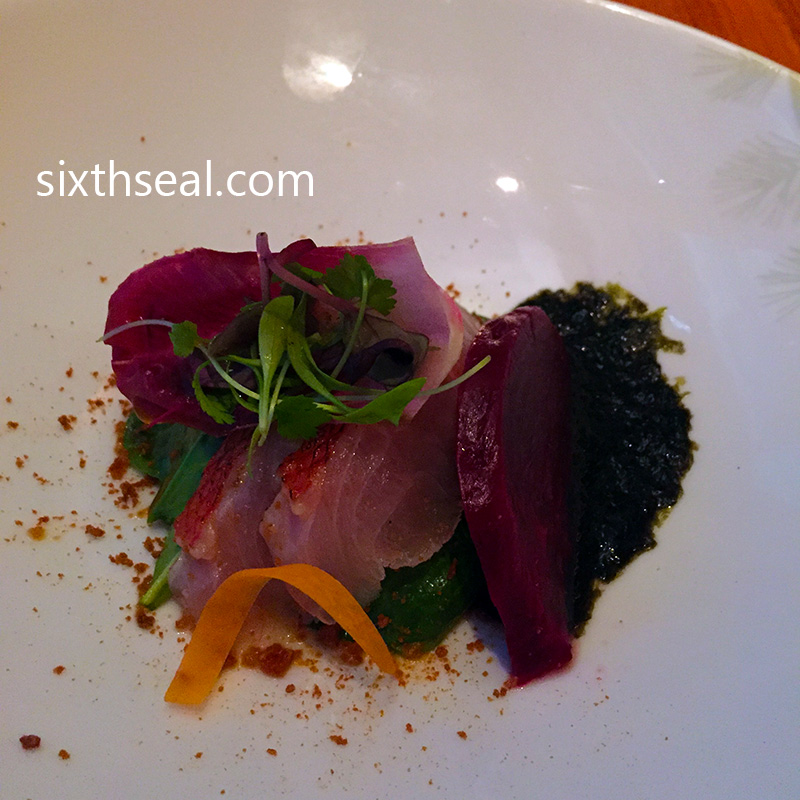 Baby Spinach Salad and Beetroot Dry Miso with Konbu and White Fish
I just realized the skinny mumbling Malay waiter mixed up our dishes! He gave this to my dear and gave my better half’s dish to me. Ish! What an nincompoop. Our regular waitress was more on point. I only discovered as I was writing, in the video I took I remembered asking him which was which and he *still* messed up the order. How incompetent, I’ll write an email to them later. 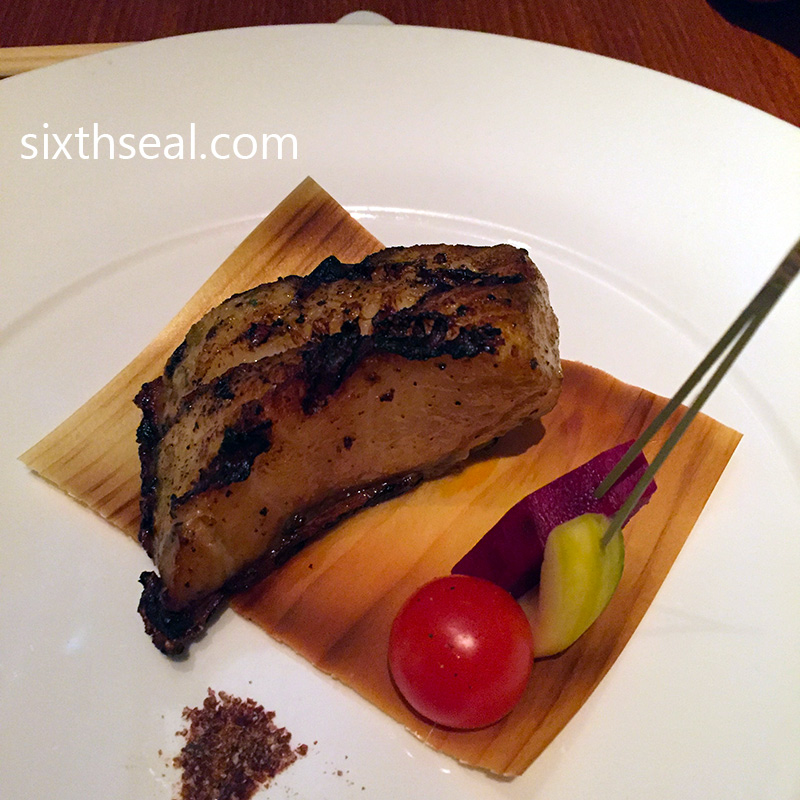 Chilean Seabass (Umami)
This is a nice charred piece of Chilean seabass. The fish flakes beautifully and tastes fresh and light. It’s cooked to perfection too, it’s quite remarkable that they managed to produce a bitter tasting char on the outside while still retaining the moist tenderness on the inside. I like the tsukemono (pickles) that came with the dish – it really cuts through the richness and provides a burst of much-needed acidity. 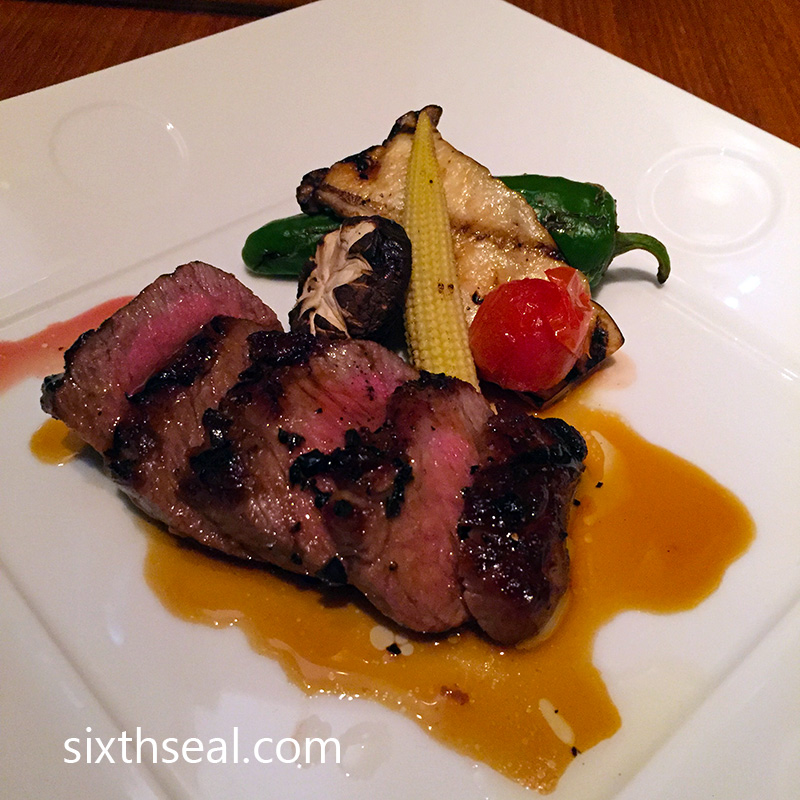 Smoked Waygu Beef with Grilled Shimeji Mushroom and Truffle Teriyaki Sauce
I love Waygu beef and we ate quite a lot of it during the kaiseki-ryori dinner at our ryokan in Hokkaido. This is a different implementation, the flavor is quite heavy-handed but in a good way. I like the grilled Shimeji mushrooms too – they’re superbly umami and savory tasting. The Waygu beef was decently marbled too. 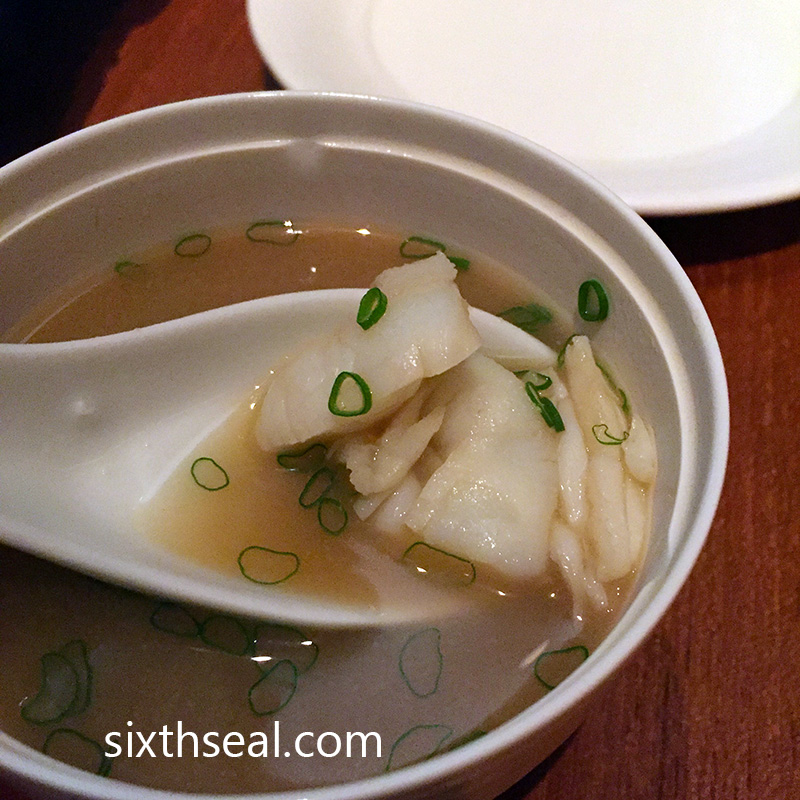 Lobster Miso Soup
This came out as an apt course to wash away the heaviness of the beef course before dessert. It’s a miso soup with lots of lobster flesh inside. I suppose this is what the RM 70 supplement you pay extra for the Special Omakase is for. The dashi-based broth was hearty and I enjoyed drinking it. I like how they put in a generous amount of lobster too. 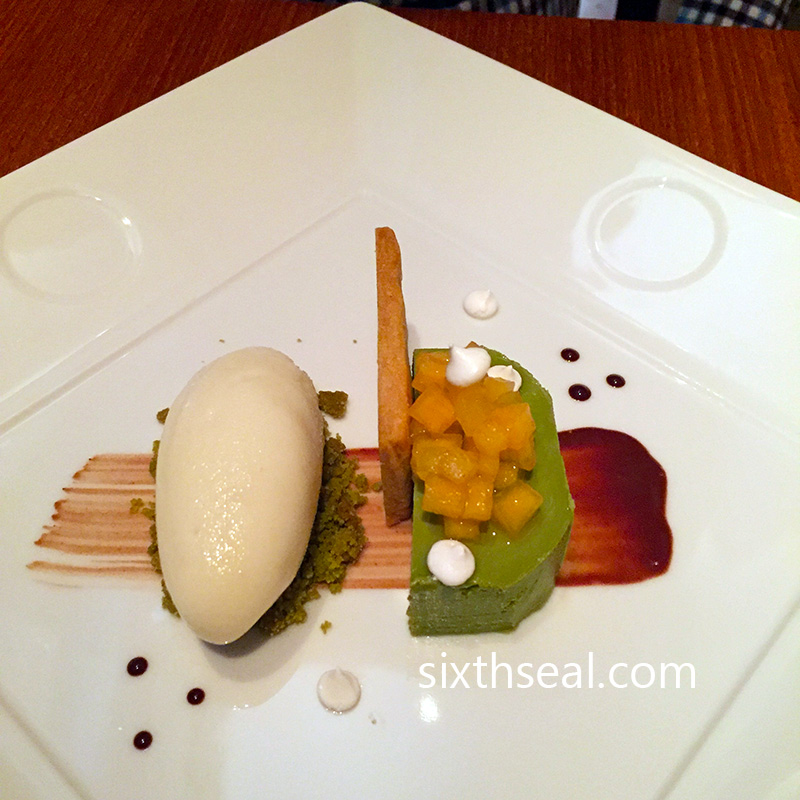 Green Tea Parmesan Cheesecake with Truffle Meringue and Yuzu Sorbet
This is a deconstructed dessert with the matcha cheesecake topping on one side, the base as a slice and the meringue as little dots scattered around the plate. It sounds modernist but it works very well. I enjoyed the rich matcha flavor and the dessert works beautifully when eaten together. The yuzu sorbet was very refreshing. It’s a wonderful end to my omakase dinner. 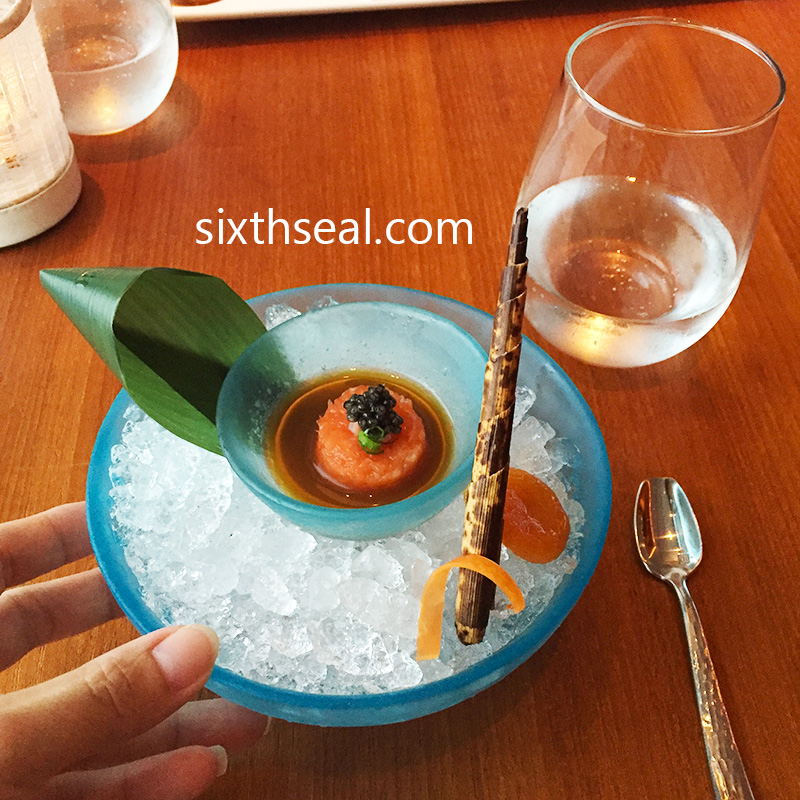 Salmon Tartare in Wasabi Soy Sauce topped with Caviar with a side of Fresh Apricot
The presentation of my dear’s first dish was impressive. It came in a double bowl filled with ice! The inner bowl contains the salmon tartare mixed with onion and garlic in wasabi soy sauce. There’s a caviar topping too and the combination works well together. Very appetizing. You’re supposed to finish it first before starting on the apricot, which is served right on top of the ice cubes. 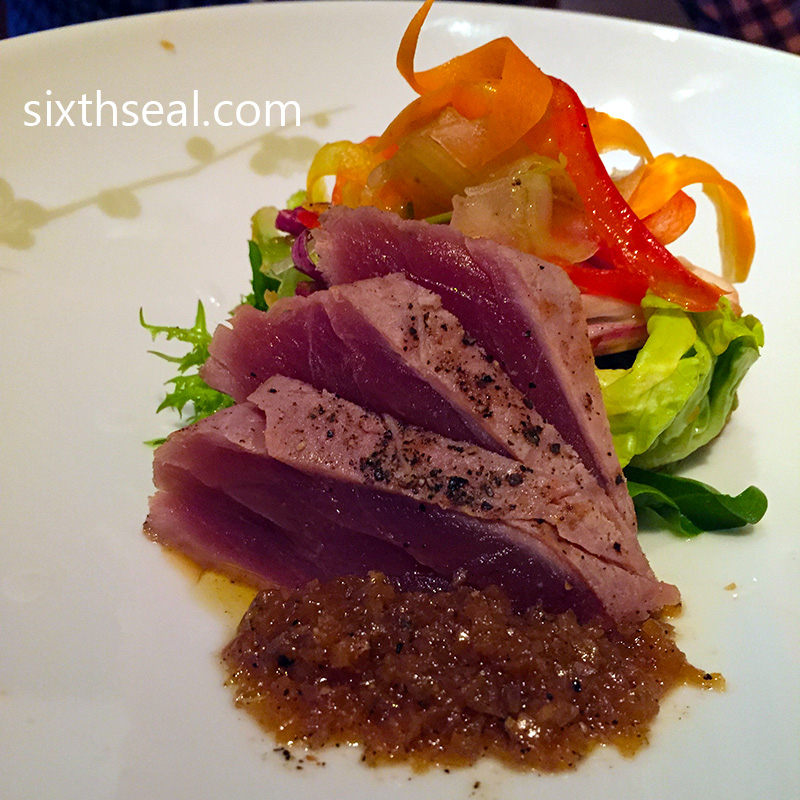 Tuna Sashimi Salad with Matsuhisa Dressing
I know exactly how this tastes like coz it was sent to me in error! It’s not the fault of our original waitress but a bumbling Malay local who confused our order. However, our waitress should have ensured this did not happen in the first place. Oh well. Matsuhisa is the name of the owner e.g. Nobu Matsuhisa, the Japanese style dressing is his trademark. 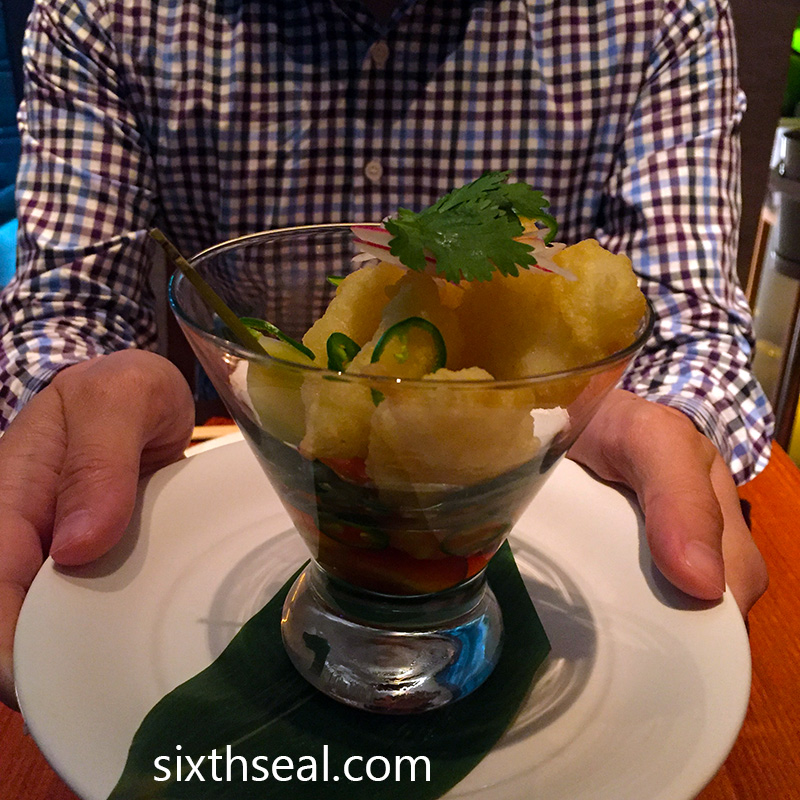 Chilean Seabass Tempura with Amazu Ponzu
My better half popped one of the tempura pieces into my mouth and I thought it was fried well but wasn’t particularly spectacular. I then noticed the ponzu sauce and dipped into it, it went famously well together! I was sorely tempted to have another but I thought I shouldn’t be eating so much of my dear’s courses. It was very nice together, the amazu ponzu sauce was brilliant and the tempura is unfaultable – perfectly done. 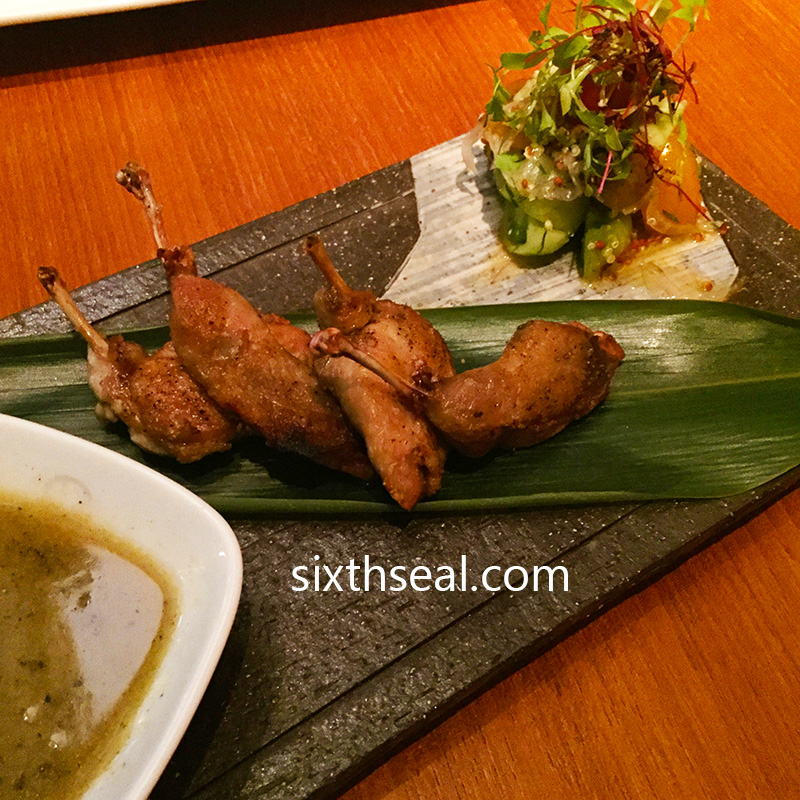 Pan Seared Quail with Wasabi Salsa and Tomato Ceviche
I tried really hard to like this dish and to be fair, the quail was cooked perfectly. It was still tender and moist in the middle while crispy on the outside. It’s cooked karaage (Japanese fried chicken) style. However, I felt like this was severely underwhelming though. It could have been a very nice dish but ultimately fails in taste. 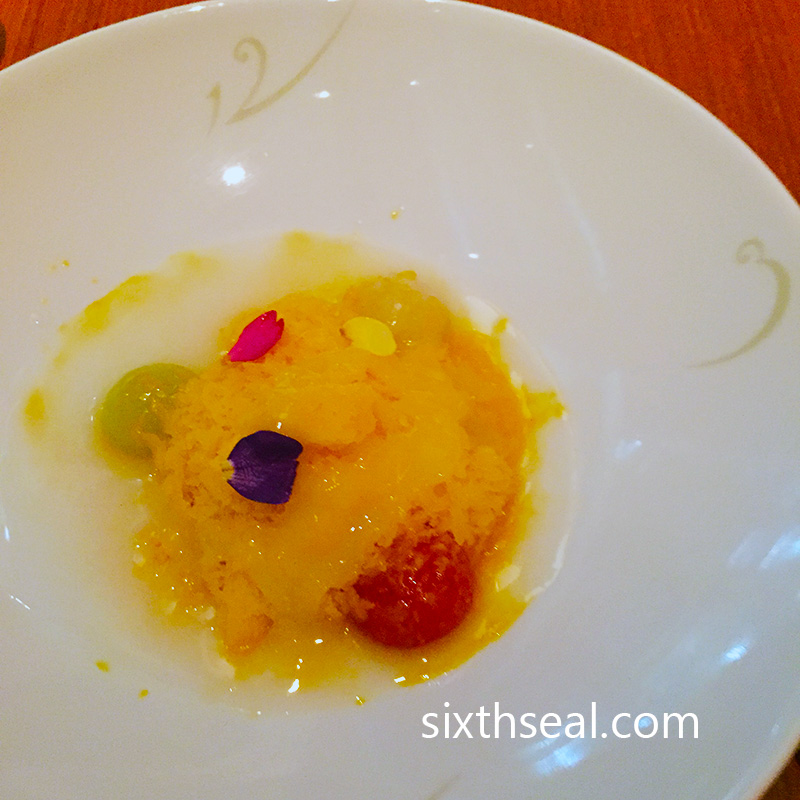 Natsu No Fruit Pearls
This is a brilliant dessert that (somewhat) saved the meal. It’s the last course of my dear’s omakase menu and consists of lychee, guava, mandarin orange, and rock melon “pearls” on top of mango shaved ice and a “rice soup” that’s poured over the dessert. The pearls actually contain pure, concentrated fruit juice inside – it POPS as you bite it, and *bursts* spectacularly in your mouth, filling it with liquid. It’s very novel and the entire dessert was well conceptualized and refreshing. 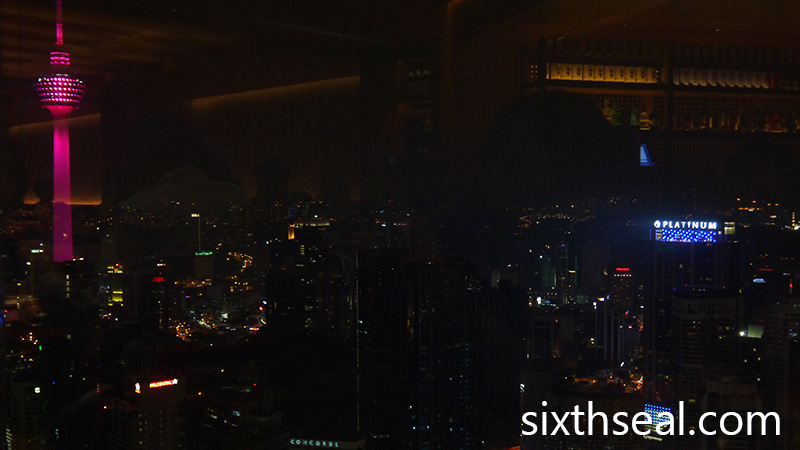 Dinner at Nobu Kuala Lumpur cost RM 889.70 for the two of us. I have to say that after going to Nobu in Melbourne and having dined at Michelin star restaurants in France and elsewhere in the world, Nobu KL was a disappointment. The food was subpar and while the service from our waitress was awesome, the other staff were very mediocre, especially the Malay guy who mixed up our orders. 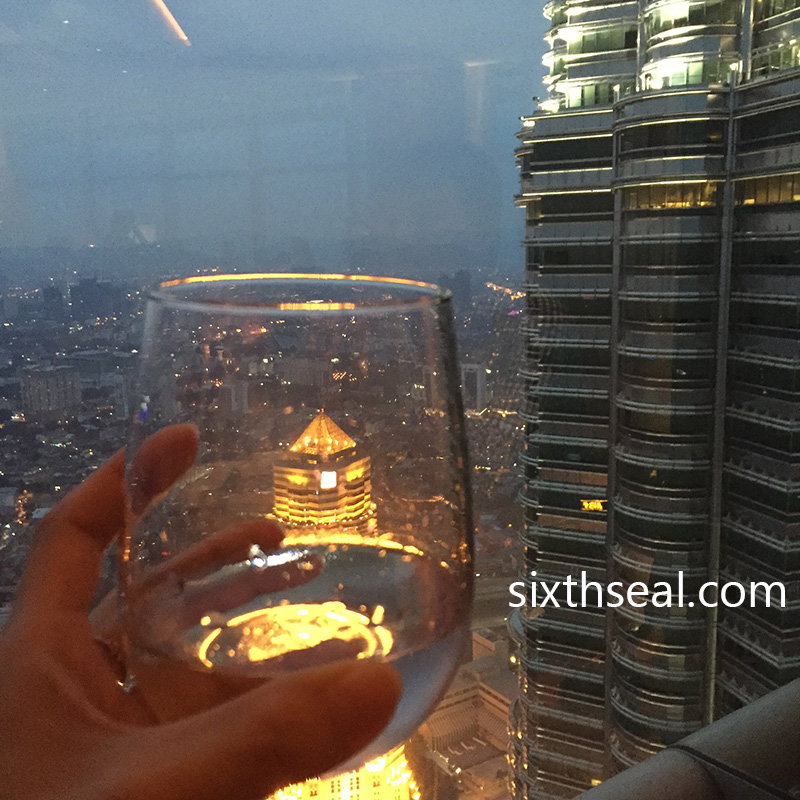 I did enjoy the meal coz I was with my loved one and the ambience is unbeatable! However, I really felt like the food could be better for the price. It’s not fair to compare Nobu KL with the great Japanese food we had in Japan, but I thought it would be better than this. I wouldn’t recommend it to anyone. I feel like the people who talked up Nobu haven’t really been to truly great restaurants around the world. 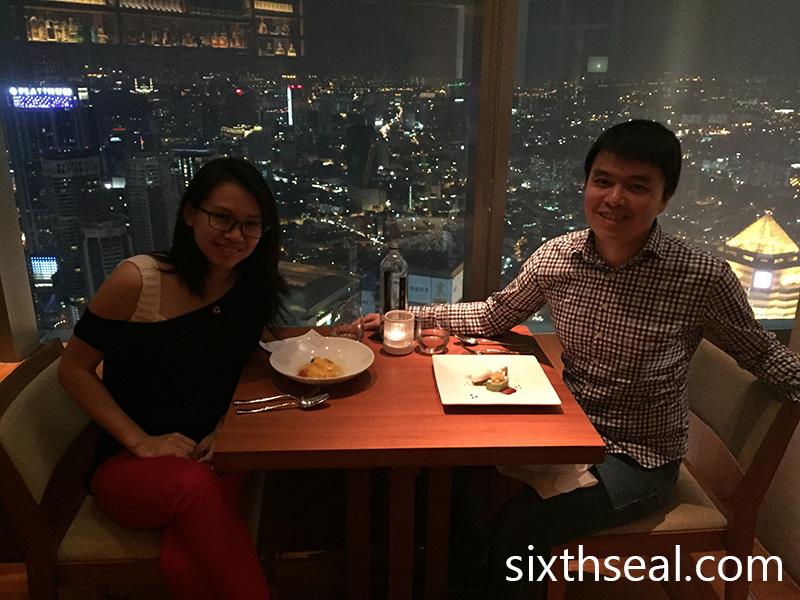 However, it was a good experience and I wanted to see how Nobu KL was like. Thanks dear for the expensive dinner and wonderful night! <3