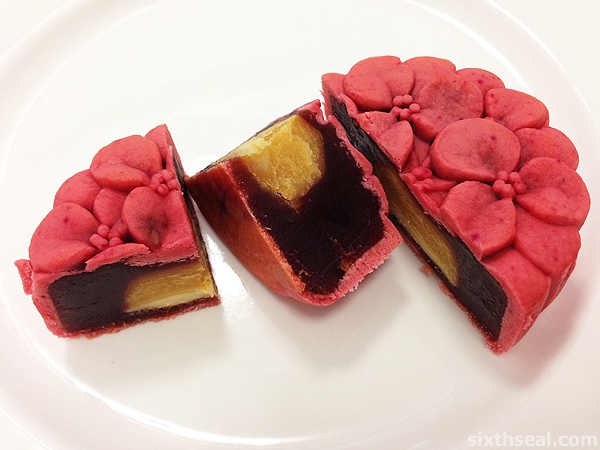 We bought a lot of mooncakes this year – so much so that there’s a lot of leftovers still sitting in the pantry! The Mid-Autumn Festival festival is based on a rather interesting legend:

There was an noble archer called Hou Yi who shoots down 9 of the 10 suns scorching the Earth and was hailed as a hero and pronounced King by the people. However, he eventually he grew corrupted during his reign and became obsessed with finding the Elixir of Life (for immortality) and coveted it for himself. His wife, knowing that he has become an evil ruler, decided not to give it to him and swallowed it herself to save the world from her tyrannical husband. 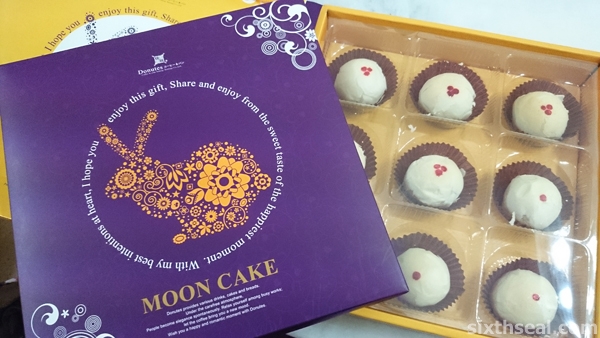 That was the version I was familiar with – it was told by my grandparents. It’s also listed under Mid-Autumn mythology in Wikipedia. My great-grandmother was a great believer in legends and *swore* I would get my ear cut if I dared looked at the full moon during Mid-Autumn Festival. Apparently the magnificence of Yi’s wife would somehow reach down from the celestial heavens and slice off the ear of an innocent 7 year old boy just coz he wondered what the bright light was. 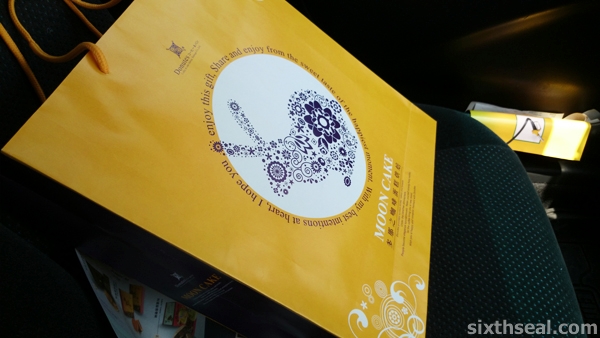 Okay, I was actually quite naughty and stared stubbornly at the moon in spite of her admonitions and my great-grandma (God bless her soul) actually took out a great big pair of tailoring scissors and seriously wanted to cut my ear lobe off (!!!) to make her point. Fortunately, my uncles saw the severity of the situation and took the scissors away from her. I still remember her story though. Yeah, I was raised with lots of TLC. 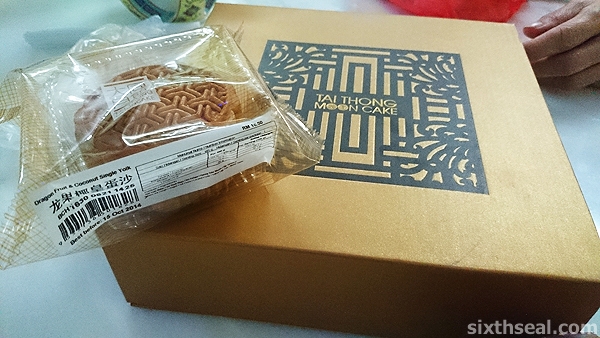 It’s like how the original Grimm Brothers stories were all very twisted and realistic (with a veritable cast of regular people with all their flaws) but children’s storybooks and eventually Disney changed them all to become easy-to-digest nice stories without any of the nastiness. 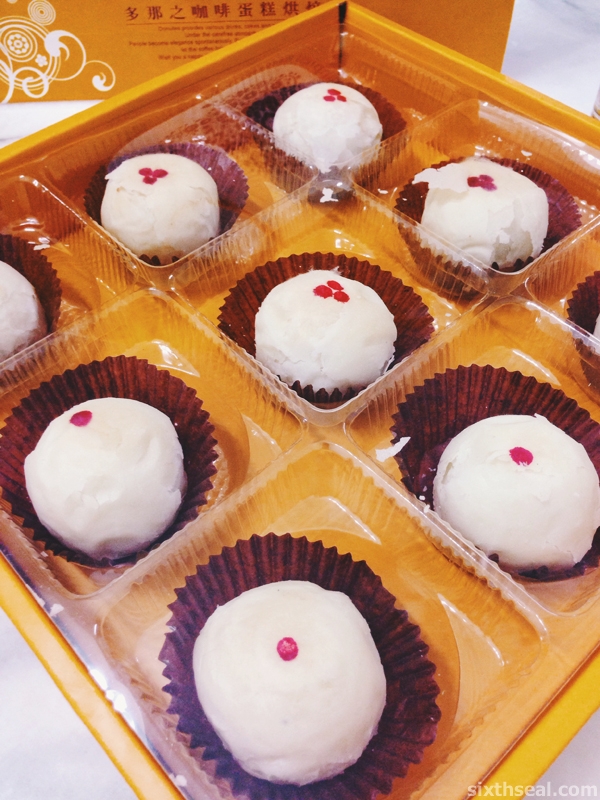 These come in a box of 9 pieces for RM 49.50. There are two flavors – Mung Bean Original and Mung Bean Crisp Garlic. The latter is quite interesting and it’s the first box of mooncakes I got for my better half’s parents. 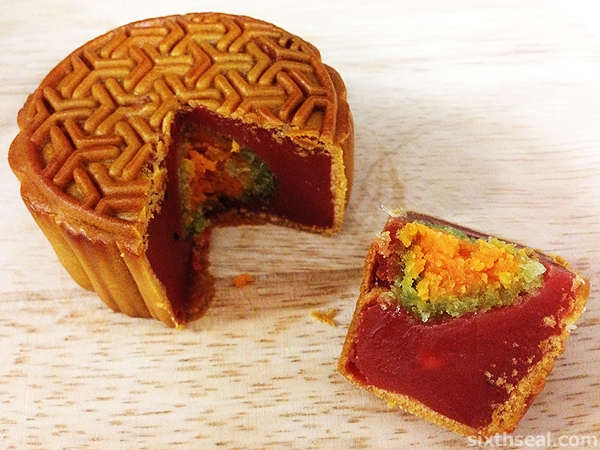 I found this to be the most interesting from Tai Thong’s offerings this year. It’s a dragon fruit flavored mooncake with a single yolk inside – what makes it intriguing is the coconut jam (kaya) surrounding the preserved egg yolk. I was quite pleased to find the flavor combination works very well. 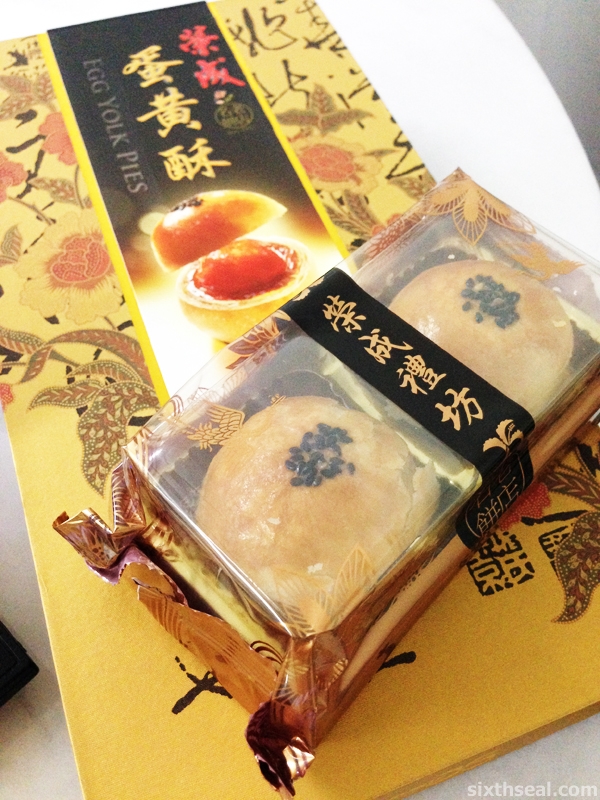 This one I bought in Sibu from the import speciality grocer Ta Kiong for RM 49. There are 8 mini Shanghai mooncakes inside and they’re individually wrapped in twin packs. 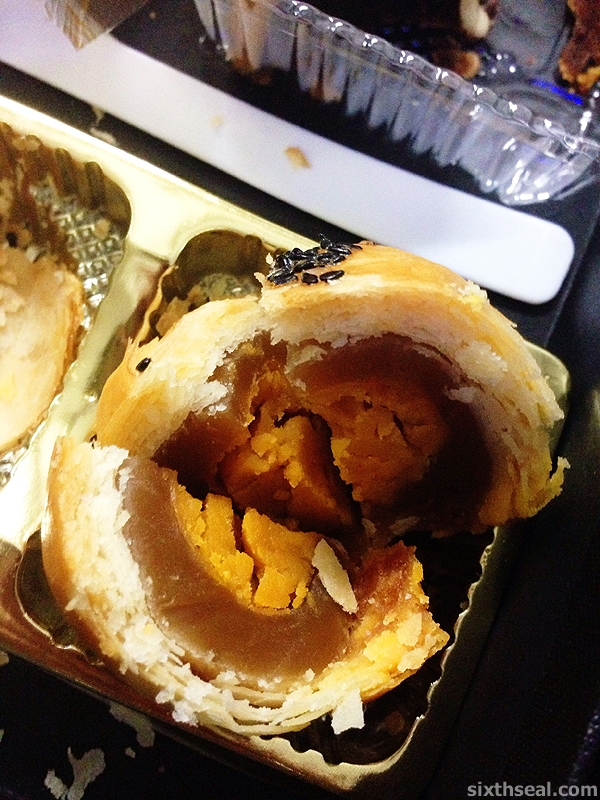 It’s made by Yong Sheng and they’ve been around since 1952 – before Malaysia’s Independence Day! Each of the miniature pies have a full sized egg yolk inside and I gave them to my dear and she quite liked it. The black sesame topping goes very well with the flaky pastry. 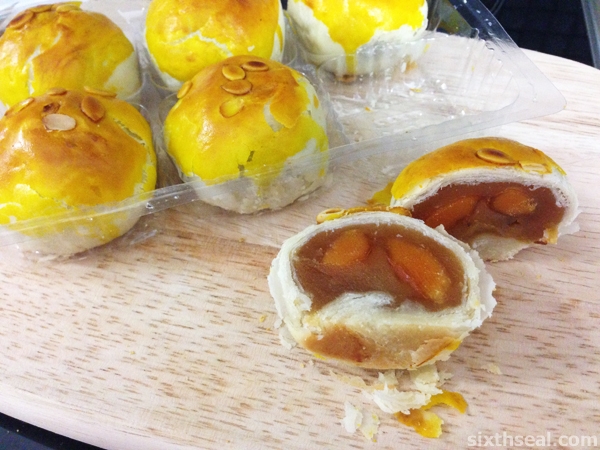 I also have a home-made version from Fairy Flower Cake Shop which comes in a box of 6. Surprisingly, the home made ones are quite expensive since they’re small batch. 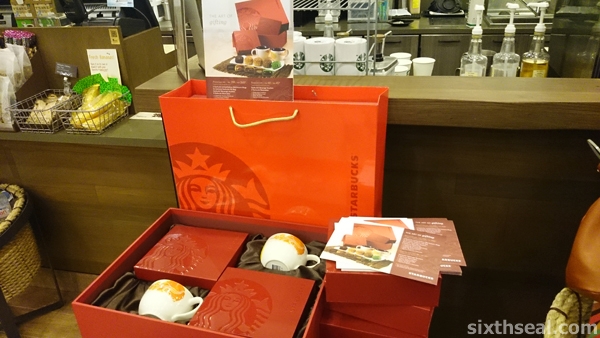 I wrote about the Starbucks Mid-Autumn Mooncakes in a previous post. These are miniature 90 gram mooncakes – slightly less than ½ the size of regular mooncakes. 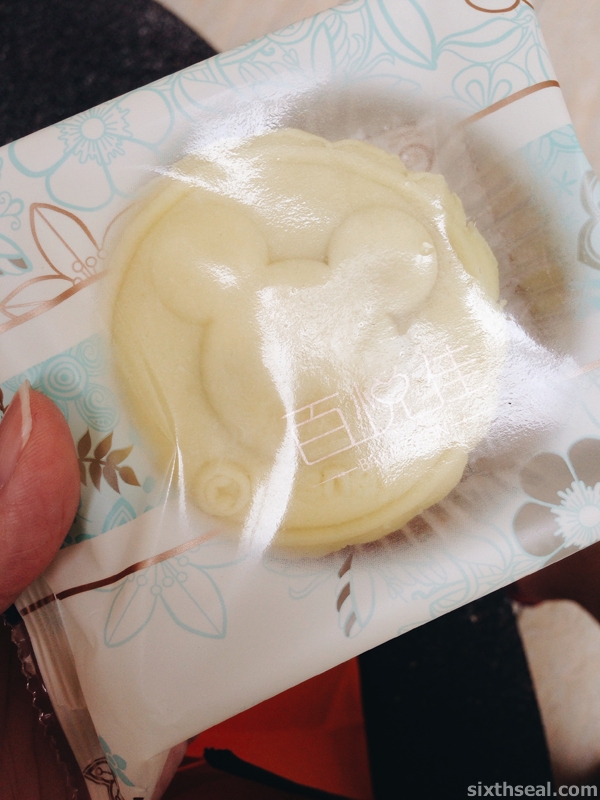 My dear kindly bought me two durian flavored mooncakes coz I really like durians and I really like mooncakes. We’ve had them last year and we found them tasty – it’s in the 2013 Mid-Autumn Mooncake Roundup. 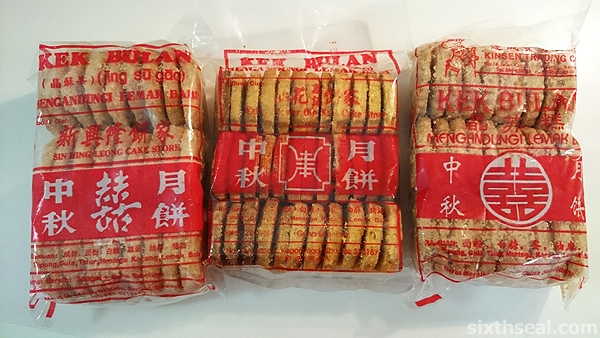 These are called jing su gao and they’re traditional Foochow lard mooncakes. They don’t have no fancy snowskin, chocolate or ice cream mooncakes back in the days. This was all they had. You’ll notice that all three (3) packs are different despite looking the same. It’s made by 3 distinct bakers – Sin Hing Leong Cake Store, Kinsen Trading Co and Fairy Flower (Ko Kee) Cake Store. 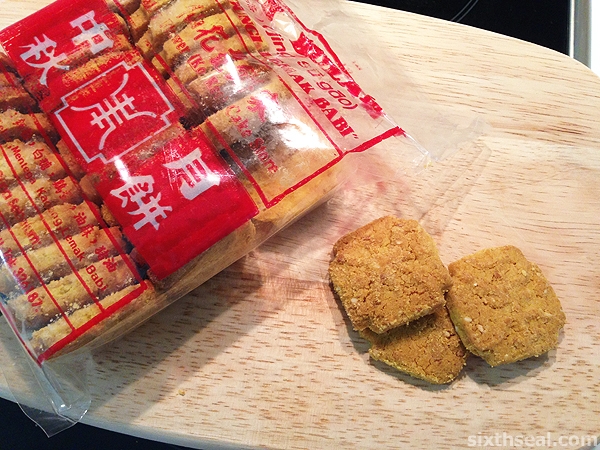 The middle one looks pleasingly brownish-yellow like freshly baked cookies while the outer two are a pale white. It’s due to the lard vs butter content. My favorite would be from Fairy Flower (Ko Kee) Cake Store – it has the right combination of lard and butter to my taste buds. These Foochow mooncakes are more like biscuits (or cookies) with a crumbly texture and a distinctive taste of lard. 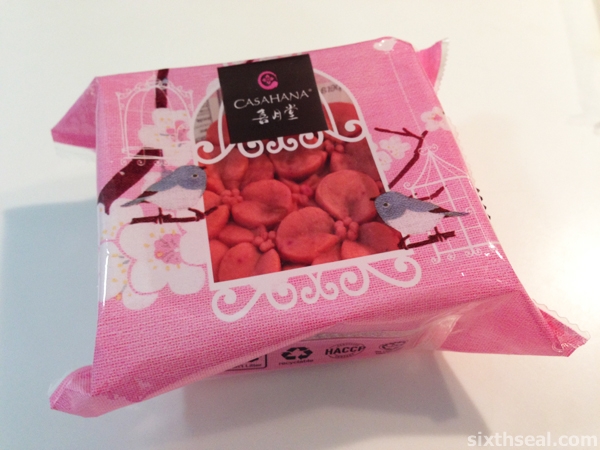 This is Casahana’s flagship mooncake of 2014! It costs RM 19.50 per mooncake and we bought it the day before Mid-Autumn Festival. They also have a charcoal black sesame brown sugar omochi mooncake called Dark Knight but I decided to go for their signature one – expansively named “Taste of Crimson Opera”. 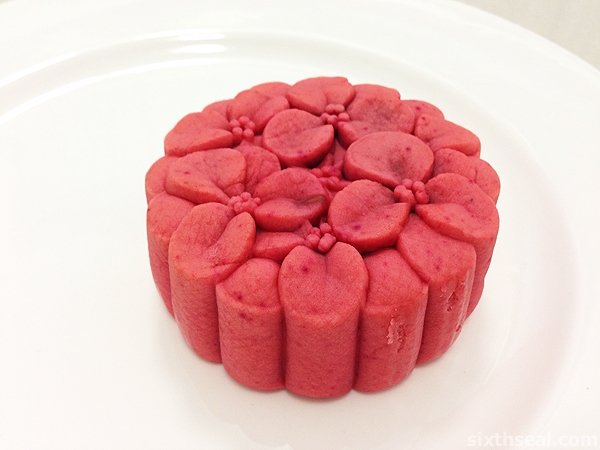 There’s a burst of beetroot and cocoa followed by the tartness of cheese and creamy white chocolate. There’s nothing traditional about this mooncake – all of the 4 ingredients (beetroot, white chocolate, cocoa, cheese) are not something you’ll usually find in a mooncake. 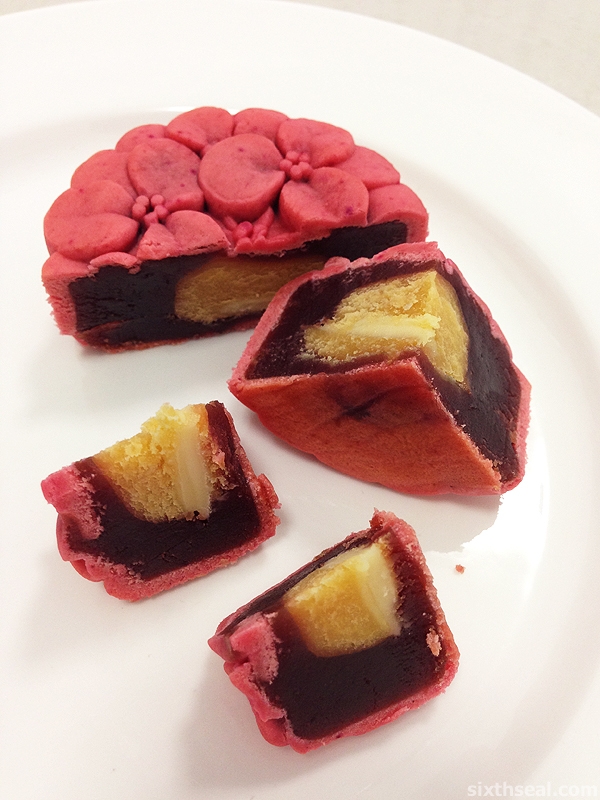 The intricate floral pattern on the top of the mooncake is beautiful too! I was pleased to find that the beetroot is also baked into the skin (so the color isn’t artificial) and it’s not too thick. I would have thought the flowers would make the skin thicker but it’s actually part of the skin. This gets Best of 2014 from us! 🙂 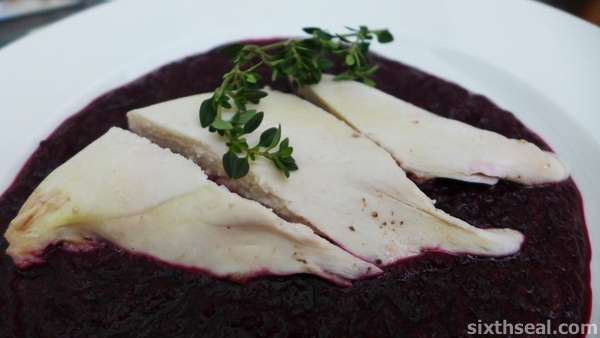 This is the best dish I’ve cooked to date! The chicken breast is really *poached* i.e. it’s cooked in ambient hot water with no direct heat for 20 minutes. I learned this technique in a MasterClass and it’s an exact replication of that dish. 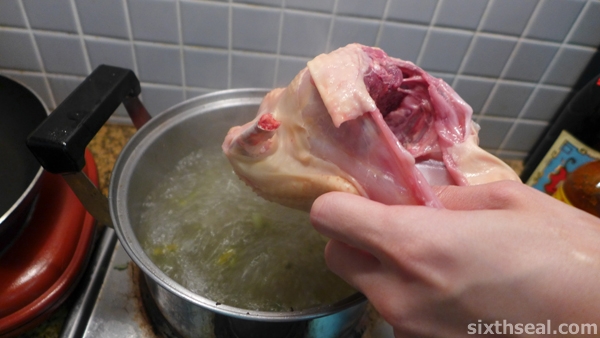 The protein in this dish comes from the crown of chicken breast without the wishbone, which I cut from a whole chicken. 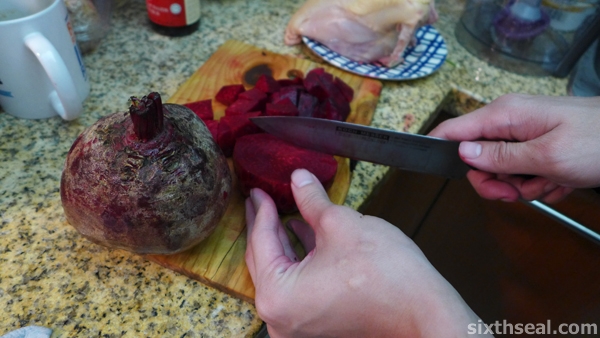 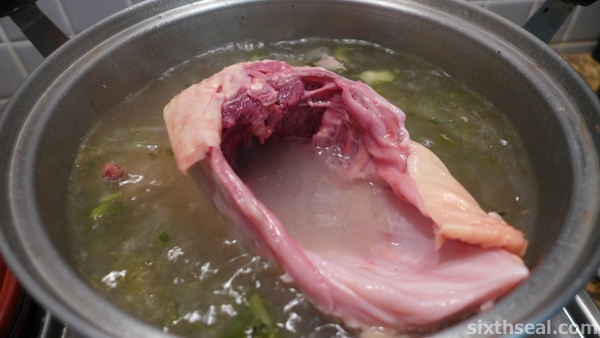 It’s quite a simple dish but the trick to cooking it is the perfect poaching of the chicken. The way to do it is to season a pot of water with garlic scapes, rosemary and salt and let it boil. 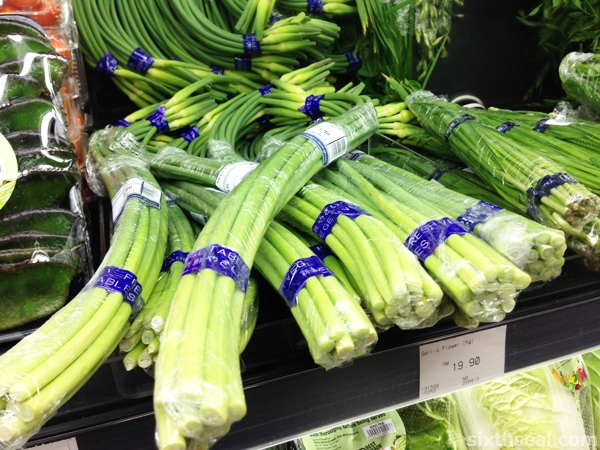 I used garlic scapes (also known as garlic flower) to flavor the broth coz it tastes milder than garlic. It costs a lot more though at RM 19.90 / kg. 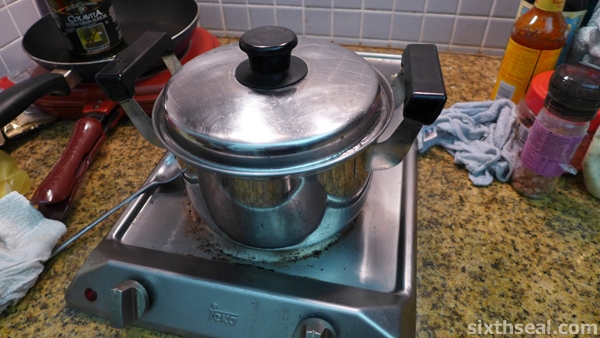 When the water has started boiling, take the pot off the flame/electric hob/heating element and slide in the crown of chicken breast. Set a timer for 20 minutes and put the lid back on. You do not need direct heat to cook this – just the residual heat from the boiled stock. 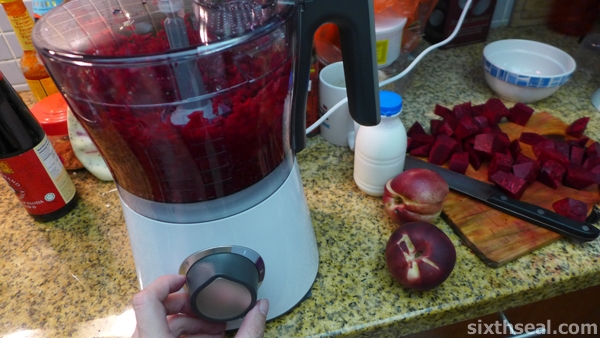 Meanwhile, I exchanged the vegetable puree that was in the original dish with a beetroot and nectarine puree. I also used raw goat milk while processing the puree. I felt that the colors look nice, and more importantly, it tasted awesome! 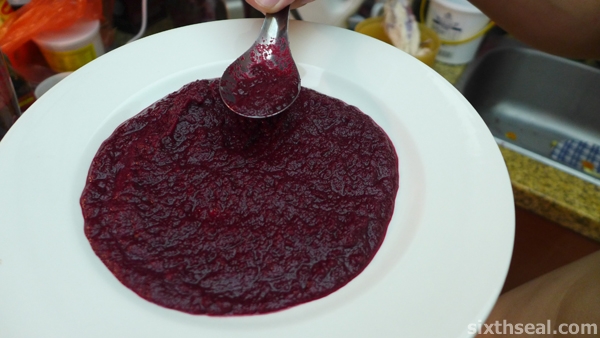 The sweetness of the nectarine balances out the beetroot and you get a nice red puree for plating. 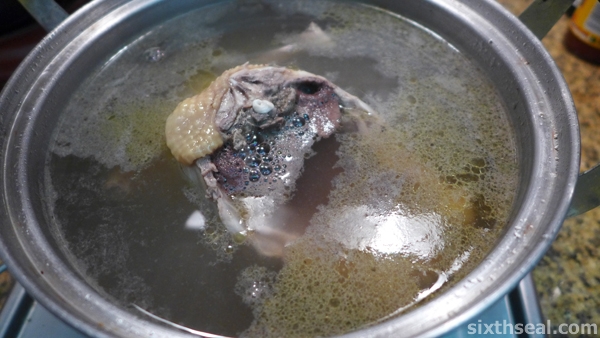 The crown of chicken breast should be taken out right at the 20 minute point, skin removed, and sliced into the two breast meat that it contains. I further made three cuts to each chicken breast be faithful to the dish replication. 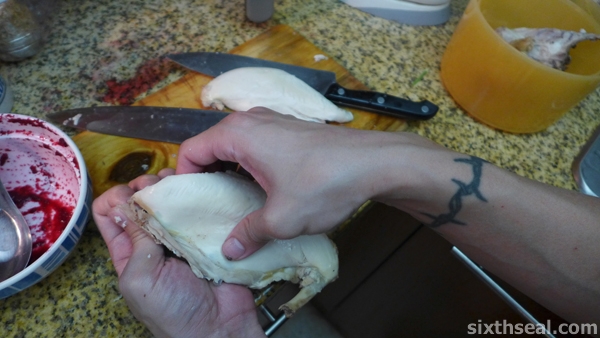 The last step is to grind up some nuts or cereal and scatter it on the top of the plated chicken. It looks beautiful (if I can say so myself) and best of all, it tastes great! 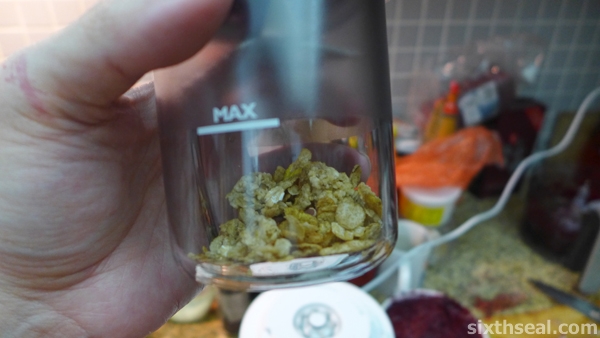 I’ve never tried indirect heat cooking and got it right at the first try. The beetroot and nectarine puree is smothered over the plate before the chicken breast is plated for the dish to pop (yes, you can roll your eyes right about now

) but the sweet puree was so good we ate it in other dishes too, like the king grouper in fish pastry shells. 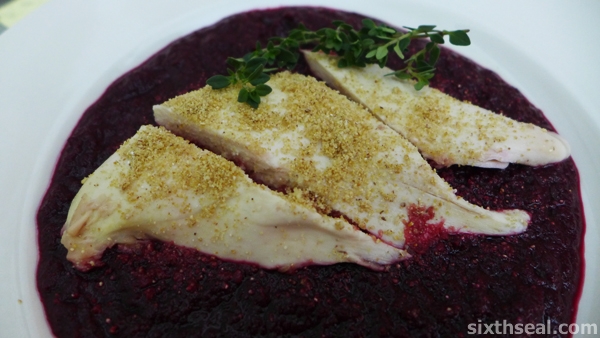 My dear better half finished her dish and it was good to be able to do a restaurant quality dish from just watching a show. Haha! I’m putting this into Best of sixthseal.com – a category which I put very few of my posts into. 😀