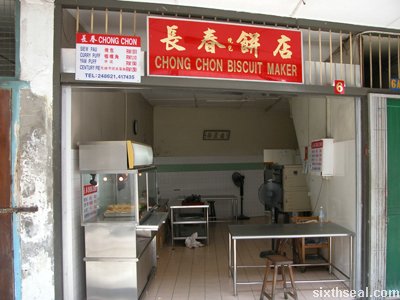 Chong Chon Biscuit Maker is nestled right in the middle of old
Kuching town and has been producing quality pastries for quite a while.
There is generally no one at the front of the shop in the morning, and
you have to shout a bit to get the proprietors from the back. 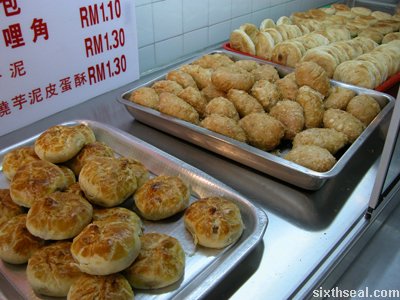 These are the common offerings that they have – pastries of Chinese
origin of all sorts, they’re famous for their sio pau (the ones with
flaky pastry). One little known delicacy they offer is Century Pie.
This is not normally available, you have to order it in the morning and
pick it up in the afternoon. 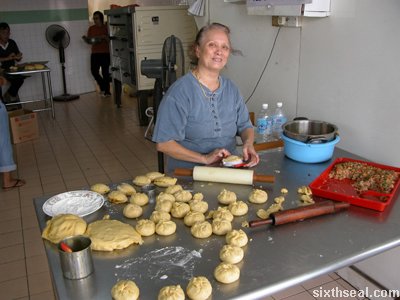 The afternoon is when the shop goes into full industry mode. Here’s
a shot of the proprietor posing for the camera while in the midst of
making pies. I picked up the two century pies I ordered in the morning
and also had an egg tart while I was at it. There’s no seating in here,
it’s a bakery, but coffee shops are abundant nearby where you can sit
and consume the pastries. 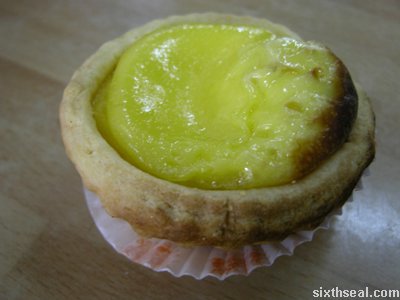 This is the Chong Chon version of an egg tart. It’s slightly baked
and the best way I can describe it is as a cross between a regular egg
tart and a Portuguese egg tart. 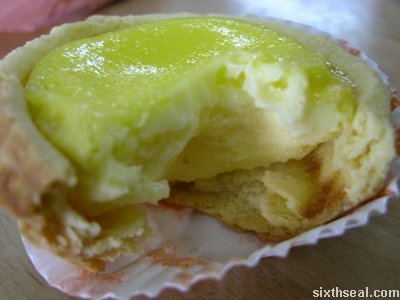 They’re very generous with the egg filling too, as you can see above. 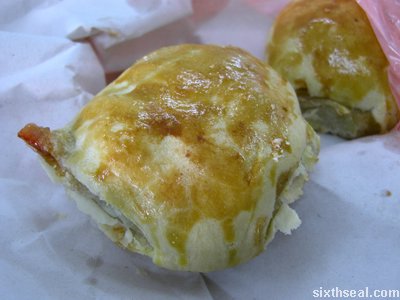 Now, this is the real gem the shop produces – an acquired taste, the
century pie is made with century egg. It’s wrapped in paper, old skool
and they don’t advertise this product much. Century eggs are those eggs
that are glossy black, with a murky black egg yolk. The eggs are made
by packing it with all sorts of dirt and earth and fermenting it, so to
speak, for a while. 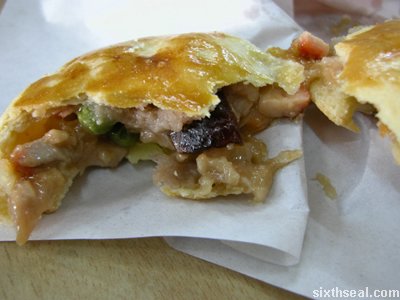 This is what the inside of the century pie looks like. It has meat,
veggies, gravy and other stuff in addition to the century egg. 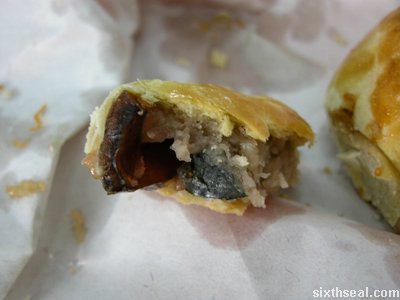 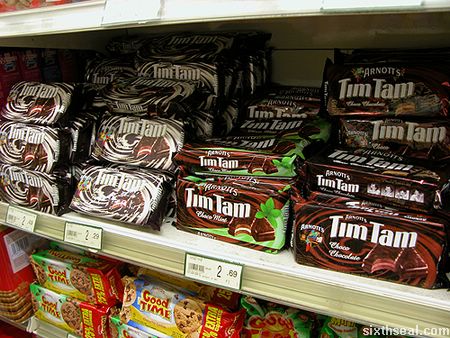 I saw these Tim Tam (one of my favorite things to eat when I have
the munchies in Melbourne) biscuits on the shelves of a Giant
supermarket and was very puzzled at the visible difference in
packaging. The wrapper is different and the size of the pack is
different from the ones I’m used to seeing. 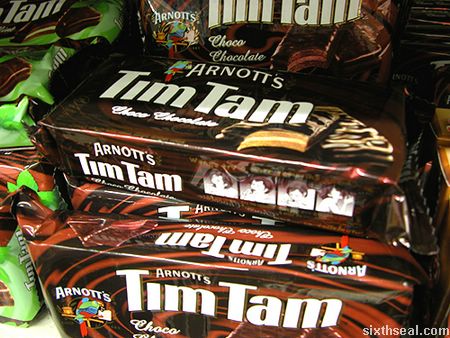 Upon closer inspection, I found out that these ones are made in
Indonesia instead of Australia. It was going for RM 2.69 at Giant (the
supermarket). I don’t know how much imported Tim Tams are, I’ve never
bought them myself here but in Coles it was A$ 2.55 (or A$ 1.98 on
sale). 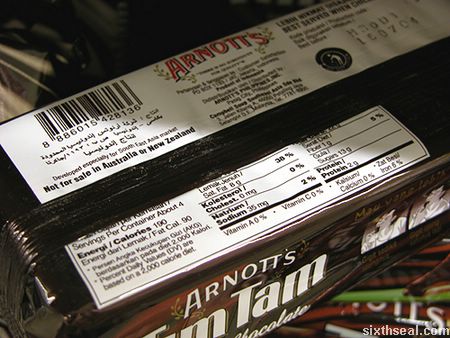 Product of Indonesia
Developed especially for South East Asia market.
Not for sale in Australia or New Zealand.

I don’t think it would taste the same though, so I didn’t get any.
The outsourced ones always seem to taste mediocre from experience.
That’s not to say Indonesia doesn’t come out with good, quality stuff
though. The legendary “X scores” were from Jakarta. Not that I would
know anything about that first hand of course.

I have been wrecked with The ShitsTM whole day long. I ate 7
eggs last night, coz I felt like eating soft boiled eggs with lots of
pepper and soy sauce. Unfortunately, my body is not used to the prodigious
influx of protein and thus, I felt like I needed to go to the toilet all
day long. I’ve been subjecting my girlfriend to my odiferous farts too.
Speaking of flatulence, I had a tutor when I was in primary school who
told me the process of manufacturing “fart biscuits”. It is done by
putting a biscuit (I hear the Marie variety works particularly well) into
a Milo tin and farting into it, taking care to “clap the lid on as soon as
you fart”. According to him, there is a waiting period of 2 weeks for the
fart to be “absorbed” into the biscuit. After the appropriate time has
elapsed, the biscuit is to be gingerly removed from the Milo tin and
offered to an unsuspecting person. It is said that the original fart’s
odors will be released as soon as the biscuit is bitten into. A delayed
release fart-in-a-biscuit if you will. He also mentioned that if it’s done
right, the biscuit should expand to several times it’s original size,
courtesy of the fart. Even now, I wonder if he’s pulling my leg or if it
recipe really works (minus some embellishments). I’ve never tried it, I
don’t have the patience to wait though the 2 week fermentation period, so
if anyone can verify the authenticity of this recipe, do not hesitate to
mail me about
the details.