Do you happen to be a king of the football field or the futsal center? Well, you don’t need to be that good actually, you can be the master of the foosball table for all intents and purposes…just as long as you can kick a football. 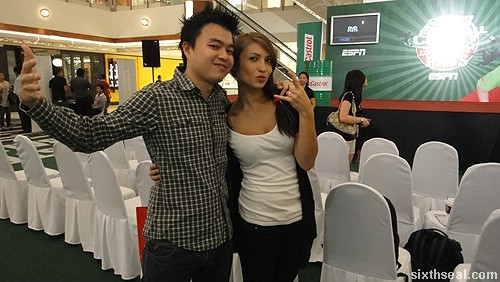 Hey, remember the ESPN Star Sports Castrol Football Crazy’s Longest Pass launch that I went too? I finally got the video that’s going to be compiled into a long football pass video spanning Asia from them! I’ve just uploaded it and you can see it here:

This clip is actually from one of the outtakes where I messed up a bit. Heh! I would have thought they would have chosen a different one since I didn’t pull this off quite well. I think I did about 5-6 takes. T_T

Anyway, if you want to be part of Castrol Football Crazy’s Longest Pass video, just follow the steps below:

You’ll be featured across ESPN Star Sports’ TV networks and also on the Castrol Football Crazy Facebook page if your video gets selected! 🙂

It’ll be nice to appear on TV on this scale so if you want the chance, submit your video to be a part of it!

Has anyone here ever been on TV before?

Tell me about it, I’ll love to hear your experiences! I’ve been on air several times but never across the whole of Asia so it’ll be a first for me! Come on, join in the fun! 🙂 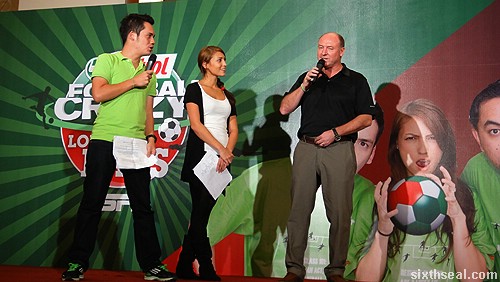 I just went to the ESPN Star Sports launch of Castrol Football Crazy’s Longest Pass campaign in Malaysia yesterday. It was awesome! I got to talk to the legendary Steve McMahon – he’s the former England international and ex-Liverpool player extraordinaire. 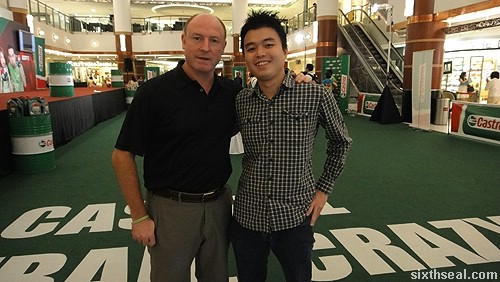 Someone mentioned that Steve looks really tough and rough but he’s really a nice guy. Heh! I tend to agree – he’s a very affable fellow, with years of experience in playing real football behind him. We all had a wonderful time chatting with him. 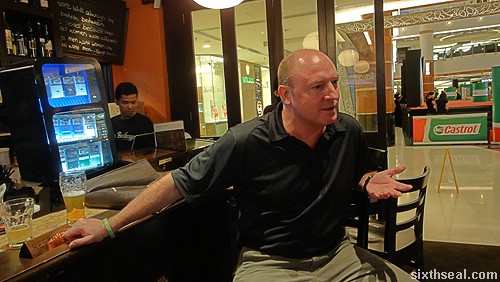 Steve has an amazing record with 200+ matches under his belt, and he’s scored 50 goals altogether. He shared some really interesting insights about the Malaysian football scene in general how it can be better. 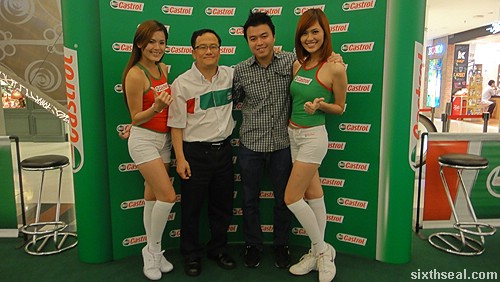 Anyway, back to the launch, it was at Bangsar Shopping Center and I saw Mark Ng (Marketing Director for Castrol Malaysia and Singapore) when I walked into the concourse. I’ve met him a number of times in the past and he’s really friendly despite his position. Awesome guy, it’s always a pleasure to bump into him. 🙂 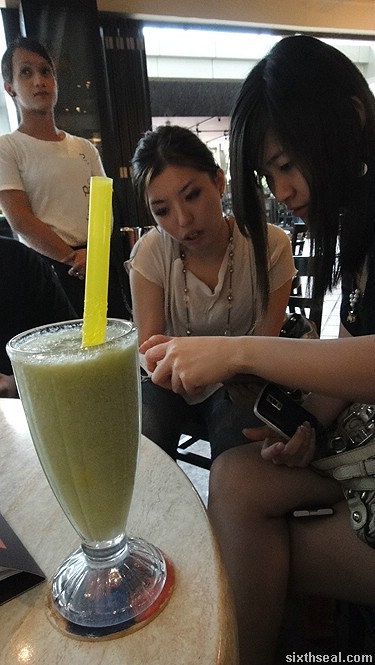 La Bodega had a couple of tables reserved for the event so while we were waiting for it to start, we got a couple of healthy shakes inside. That’s Jestina and Mimi in the background, looking through the menu and deciding what to order. I thought it was a rather artistic shot. *self praise 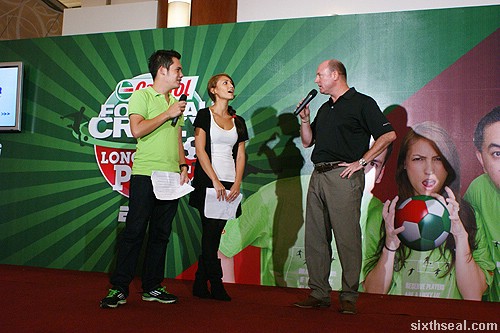 ESPN’s Castrol Football Crazy’s Longest Pass launch started with the hosts of the program (Adam, Patricia and Jason) introducing Steve McMahon and a local guy who can do AMAZING things with a football. He was on stage, basically dancing to a song with his football. 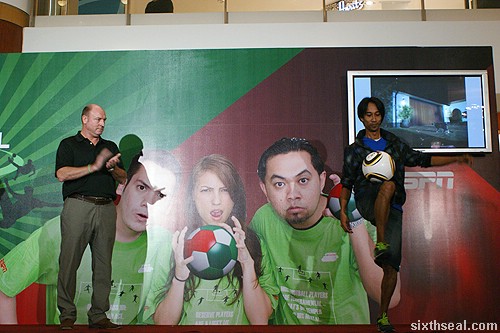 His control is impeccable – the football was on his neck and he somehow got it between his legs in a rapid twisting motion.

You’ve got to see it to believe it. I hear he’s the best freestylist in Malaysia.

The other thing that really impressed me was the neat trick they pulled off with Jason. Adam and Patricia were on stage, trying to find the missing Jason (word was he went to the toilet) when the TV came on. 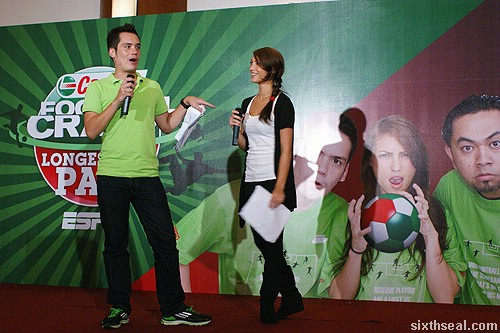 It turns out that Jason wasn’t anywhere in bsc at all. It was a pre-recorded feed which syncs perfectly with the other two Castrol Football Crazy hosts. The banter went on and Jason kicked a ball from the TV (remember he’s not actually in bsc), which appeared on stage and Adam and Pat took the ball from there. 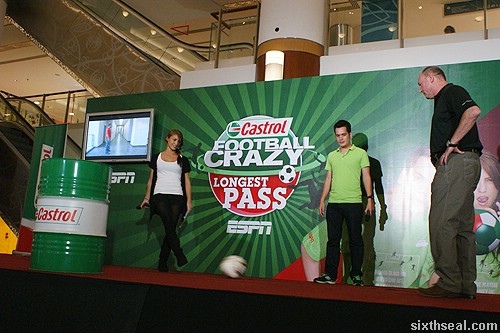 What can I say? I’m a sucker for nifty launch gimmicks. 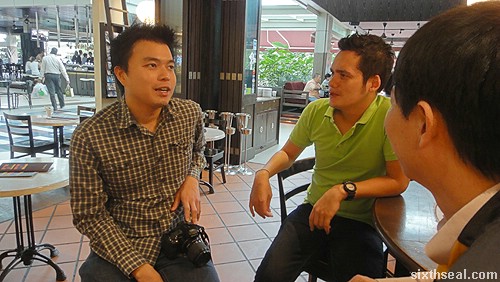 …and that is what ESPN’s Castrol Football Crazy Longest Pass is all about! It involves all of us (yes, including YOU way at the back) making the longest pass in Asia. Just record a scene of you kicking a football to someone else off-screen and upload it! 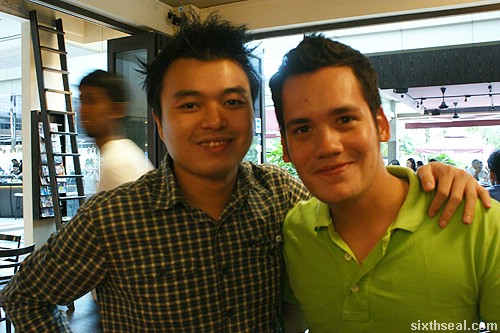 The best videos will then be chosen and edited to make a seamless football pass throughout Asia! Imagine your kick going to someone in the Philippines and then to Japan etc etc – you’ll get the drift. I watched the promo commercial and it’s set to be an amazing campaign!

The ESPN people recorded us making football passes on stage and I had to do several takes coz I kept wanting to do something fancy but failed. T_T 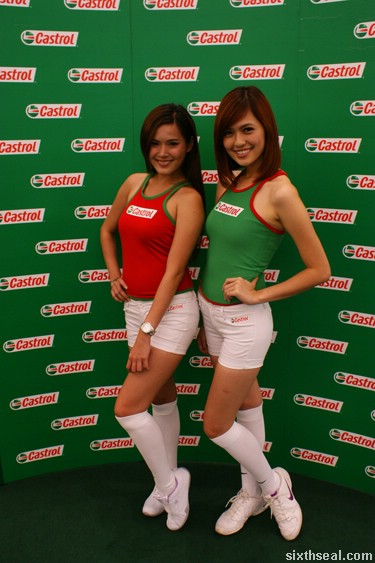 I’ll be getting the video after they’re done with post-production and I’ll upload it for you all to see what it’s like. It was a lot of fun to be part of the Castrol Football Crazy’s Longest Pass campaign!

In the meantime, why don’t you record a video of you doing the same, upload it and send it to cfclongestpass@espnstar.com with your full name and country details? Just use anything – even a phone cam would do, and if your entry is good enough, you’ll be featured on TV across ESPN Star Sports’ network as well as on the Castrol Football Crazy Facebook page. 🙂

You’ll basically be in a video featuring a never-ending football pass throughout Asia! Find out more and be a part of this campaign by surfing over to the Castrol Football Crazy Facebook page. 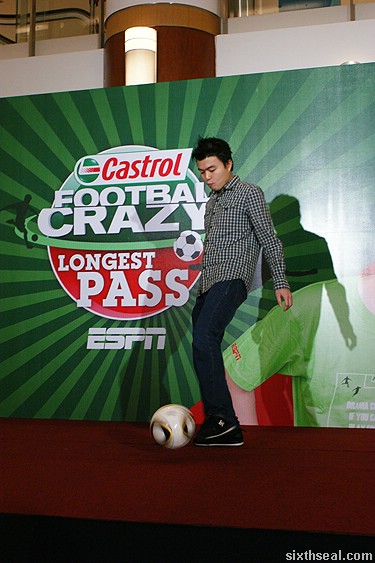 I’ve always wondered how fast I can push my car. I know it can go above 170 km/h on the PLUS highway but how do I get it to leave a trail of fire? 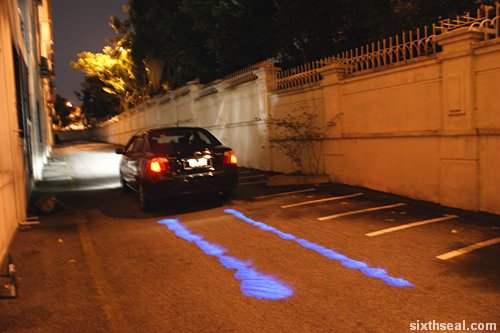 The short answer is, in the real world that is scientifically improbable. I use the word improbable coz I don’t want to look back at the sixthseal.com archives 20 years later and kick myself when they invent really fast cars which can actually leave a blazing trail behind. 😉 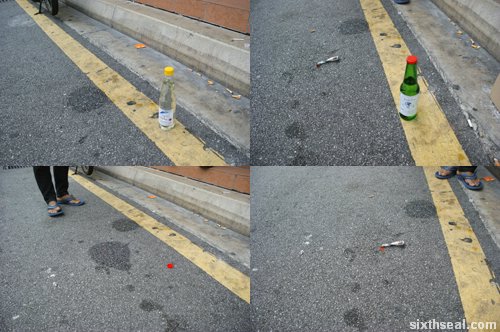 Thus, I tried unorthodox methods of making a “blazing fast” car. Turpentine doesn’t burn, gasoline burns with a yellow flame and so does kerosene. I want a hot blue flame that doesn’t extinguish easily, so after much experimentation (much to the chagrin of the hardware shop, as I was using his premises to do the burn tests) I settled on methanol spirits. 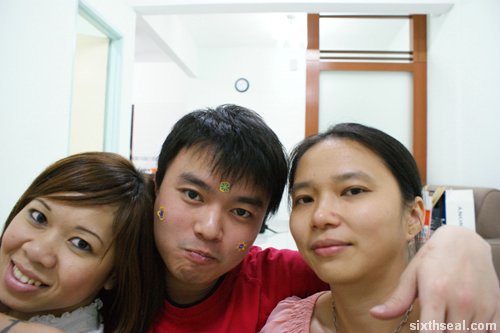 Okay, the video is an epic FAIL. Teng Loo wasn’t familiar with my car and she didn’t manage to put it in gear when I shouted GO! However, the effect is rather nice. 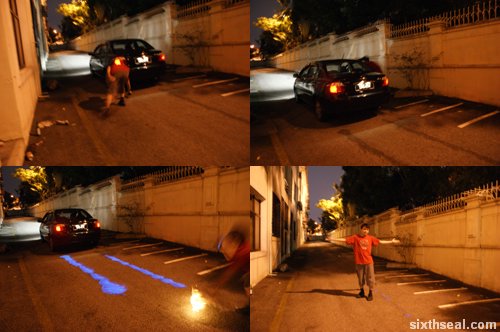 It got me thinking though, why would I go through all that trouble, risking arrest when I can just boost up my car performance the proper way? I could have just gotten some Castrol EDGE Sport engine oil.

While it won’t make your car leave a blazing trail of fire – it will boost your engine performance. The Castrol EDGE Sport is a race proven oil to give you that extra EDGE (no pun intended) in power and performance and protects your engine to boot! 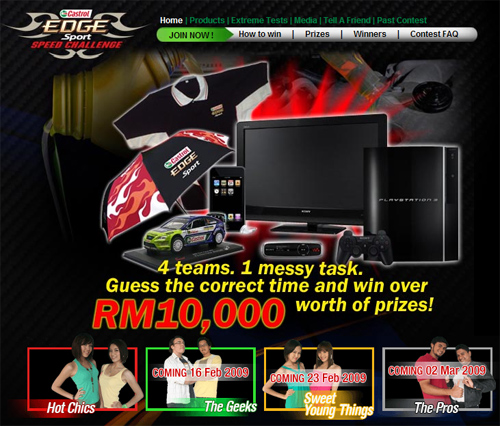 Castrol is running an online contest called the Castrol EDGE Sport Speed Challenge that I thought is pretty original. Four teams are pitted against each other to see which group can change engine oil the fastest. The four vastly different teams are:

One video will be released each week over a four-week period and you get to guess the time used by the four groups to change the engine oil. The person who enters the closest time to the actual time used by the group will be the winner. Guess & Win!

There will be one weekly winner and a grand prize winner for the Castrol EDGE Sport Speed Challenge.

Bloggers won’t miss out on this coz Castrol is kind enough to run another concurrent contest, especially for you! Exclusively for bloggers, the Blog & Win contest requires you to blog about and embed the video of the Castrol EDGE Sport Speed Challenge contest in your blog.

You can get the videos from the Castrol website. Give it your best shot! The six (6) most creative posts will win!

Win what, says you? Okay, here are the prizes for the Castrol EDGE Sport Speed Challenge contest:

6 X Prizes for Blog & Win
1 unit WALKMAN(r) MP3 Player
For bloggers who write the most creative post about the Castrol EDGE Speed Challenge.

Do watch the videos on the Castrol site – it’s much better than my FAIL attempt. 😉 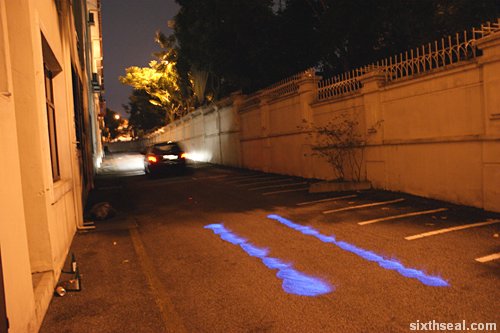 You feel the need for speed?