My relationship status went from “Single” to “In a relationship” during Chinese New Year – just a couple of days before the august celebration on the 14th of February.

I spent Valentine’s Day on a 9 pm flight from Sibu to KL while Jeanie took the 10 pm from Miri to KL. It was past midnight when we met up at the airport (waited about an hour for her) so we decided to celebrate it the next day.

I sent flowers to her office several days ago – on the first day she was due back at work as a surprise since I knew we wouldn’t be able to meet on Valentine’s Day itself. We were pretty much bushed by the time we arrived on the 14th (technically 15th) so we woke up early (relatively) the next day and went for:

It was a holiday so we pretty much spent the whole day at MidValley – caught a movie together – a rather cheesy HK production which turned out to me more self-parody than movie but it has its moments. I remember watching a movie with her at our first date several years ago, which was rather disastrous.

I think she told me I was an asshole before slamming the door on me after that, which was pretty funny in hindsight.

Anyway, we also did the fresh romance thing and ended up buying one of those couple t-shirts. Heh!

Dinner was a quick one at Delicious – both of us were feeling very sleepy – before heading home.

She had a training session to go to this morning so I drove her down and somehow got a punctured tyre in the process. >.<

It’s a good thing this was near the Sg Besi toll coz I didn’t have a jack so I couldn’t change it – I went to borrow one at the toll booth and they sent the PLUS highway patrol over to help me change it.

I managed to get her there just in time.

I thought it was a rather interesting Valentine’s Day – I nearly couldn’t drive coz after the flat tyre fiasco coz I managed to get my car keys stuck in the boot. How?

There you go. It’s a good thing a little elbow greese pried my car keys loose from the jaws of the car boot.

Oh well, at least no religious police came knocking on my doors.

Okay, it’s listverse time! What do you need to do before Chinese New Year kicks down your door and sprays you in the face with FOX 5.3 million SHU OC pepper spray? 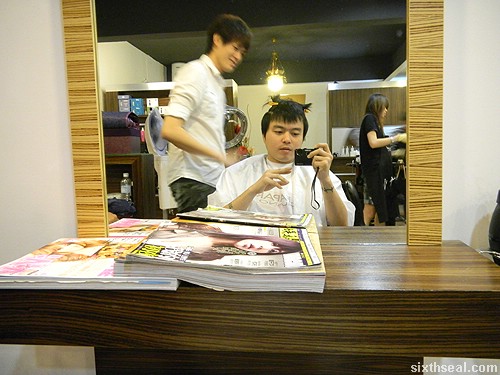 Well, the obvious thing is to (as my grandma would put it) GET A FUCKING HAIRCUT. I’m totally down with that, I totally understand that an untamed mane is a liability when all and sunder gathers around during CNY eve a.k.a. The Reunion Dinner (TM).

I still haven’t figured out what to tell them when they bug me about not being hitched when I’m 30 but I’ll cross that bridge when I come to it. 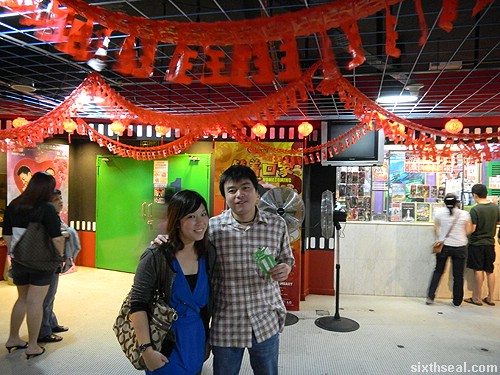 Anyway, I’ve been hanging out with Jeanie the past couple of days and last night we ate this super sized portion of Prosperous Mee Sua (longevity noodles) for RM 18.50++.

It’s pretty good – there are lots of goods in the middle – squid, prawns, mushrooms etc etc but what makes this dish from Tanahmas special is the way it’s served. Mee sua in Sibu is usually soggy and drowned in chicken broth – this version is a crispy and soaked in gravy and it’s very tasty! 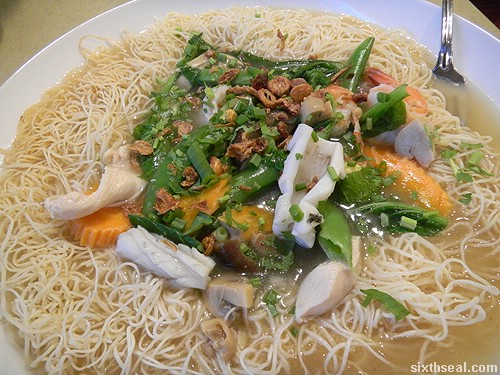 The portion is a bit too large though coz my stomach has shrunk during my hibernation (not eating for 24 hours) so it took us quite an effort to even make a dent in the dish.

I told Jeanie that according to custom, you’re not supposed to break the strands of mee sua lest the Powers That Be/God/Sol Invictus/(insert deity) frowns upon you and casually strikes off a few years from your lifespan in His righteous anger (at least according to my paternal grandma). 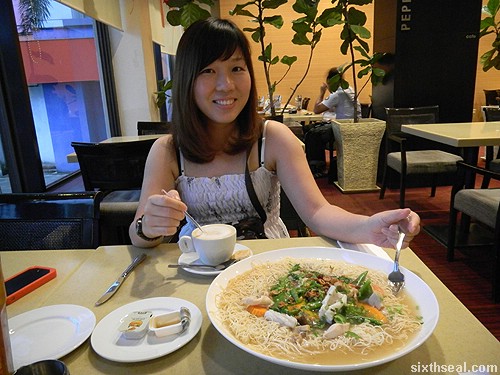 I reckon we sacrificed 20 years (cumulative) of our lifespans coz we couldn’t finish the generous portion but still it was a good dish and I loved the goodies in the middle.