That was the topic of the sermon at Calvary Church, Damansara Heights at the 5 pm English service just now. I thought it was quite interesting, something to think about at least. I’ve been trying to find a church that I’ll be comfortable in.

I haven’t been to church in a long time. It’s 18 years by my count, excepting the time I went to Wesley Methodist Church in Sibu last time I was back to visit my mom (and I thought it was election time too).

I’m not used to loud and expressive praise and worship sessions – I was raised as a Christian, went to Trinity Methodist Church in Kuching and Wesley Methodist Church when I was in Sibu. They’re both UMC sister churches and we use the hymnal – usually droll but somehow peaceful hymns.

This is totally different. However, I think that the ability to unlearn and relearn new things is a prerequisite in this fast moving social media age and I found myself enjoying it by the second song (which I would really like to know the title of).

I’ve been procrastinating in going back to the church – I left the congregation when I was 12 coz I didn’t believe in it anymore. It’s more than just knowledge, it’s the hypocrisy and politiking that I see which made me lose faith in Christians.

I’m sure I’ve said this before but one thing my dad said that caused me to reevaluate is – Don’t look at the Christian, look to Christ.

…also I have my own personal reasons for going. You can call it the opiate of the masses but there are no atheists in foxholes too. 😉

However, I’m still trying to believe. I think I’m moving towards that direction but I don’t think this church would be a good fit for me. I prefer to contemplate in a quiet setting and speak to my personal savior and this isn’t very conducive to doing so. It’s also an Assembly of God denomination which has doctrinal differences from Methodists, the biggest one being:

The Assemblies of God believes in the Pentecostal distinctive of baptism in the Holy Spirit with the evidence of speaking in tongues.

That goes against everything I believe in. I find that churches like these tend to coerce people to do so (speak in tongues) which leads to a lot of people faking it to make it. I was at a seminar a while back in Sabah where a Canadian group came to speak – they’re also Pentecostals and during a blessing session, everyone (about 300 people) fell down, “consumed by the holy spirit”.

I didn’t. There were people behind me waiting to hold me and one of the pastors whispered to me – “Just lie down”.

I don’t want to coz I didn’t feel the touch of the Lord. I was the only one standing in a group of 300 threshing and moaning people. The sheer pressure to join them is quite incredible and I believe that’s what most people were going – just succumbing to the pressure. I stood my ground though. It was hard, and I’ll be lying if I said I didn’t feel self-conscious but I don’t want to pretend to do feel something I don’t.

I won’t judge, Matthew 7:5 says the famous words about that but in matters of faith, I ALWAYS defer to my dad. He’s hands down the most pious person I ever met – a True Believer. I trust him in these matters.

Thus, I’ll probably be still searching for a church that fits the doctrine I believe in. I can’t say I’m a Christian right now, and I’m still trying to reconcile God with science, life and sociology – things I believe in like evolution, LGBT rights, massive allegations of fund mismanagement (hey, they’re human and humans sin).

I also want to make sure that I’m doing it for the right reasons and not using religion as a crutch to get me through some hard times.

I’m really opening my mind here after 18 years (it’s actually longer, I stopped believing but continued going) of being an agnostic atheist – I want to believe and I know it’s not your prerogative to show yourself to me God, but you know, it would help a lot, especially right now.

Heh! It’s actually non-religious, it started from AA but I learned it in NA, it’s called the Serenity Prayer and AA/NA isn’t a Christian foundation – it accepts people from all faiths and religious discussion is prohibited. 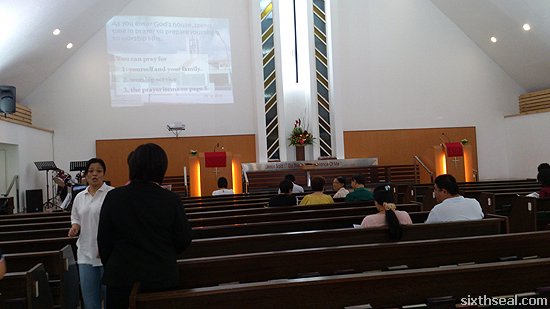 It has been a while since I last attended a church service. By “a while” I actually mean 18 years (!!!). I stopped going when I was 13 – it used to be a family affair before that. We’ll all go for the 7:30 am English worship service followed by brunch.

I’ve been meaning to find a church that I’m comfortable with in KL and made a promise to myself that I’ll start looking last Sunday but since I was in Indonesia, today was the first day I stepped foot inside one. 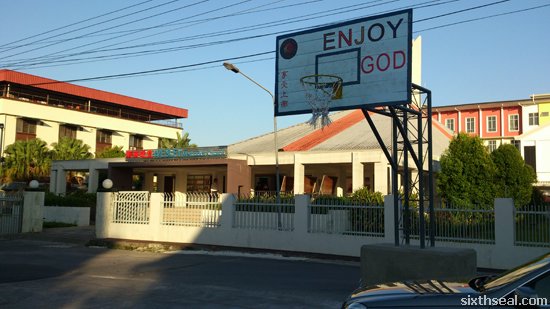 Wesley Methodist Church is a relatively small assembly in Sibu that my family goes to. It can best be described as a conservative Methodist church with strong fundamentalist teachings. The service is very orderly, quiet and steeped in tradition.

I told my dad of my intention to join them for the morning service – my dad is very involved in the church, he’s one of the ushers today so we had to go earlier. I wolfed down a huge chunk of chocolate generously spread with peanut butter (buried would be a better word, I scooped up a good quarter of the contents of the jar) and we all arrived well before the service started.

I was surprised that a lot of the older members of the congregation still recognize me. I didn’t see a lot of new faces, it doesn’t attract a lot of young people due to the reserved and orthodox nature of the church. 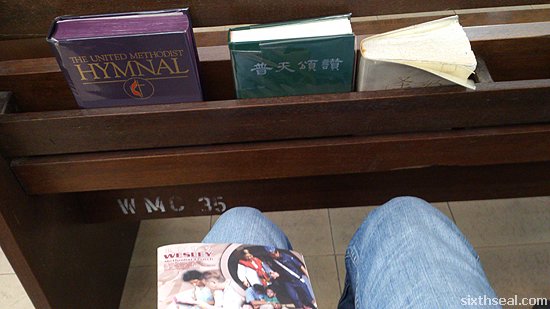 Don’t expect loud music and fervent singing, it’s all about solemn hymns with subdued piano music here. I don’t think the church believes in any music written after 1900.

I did enjoy the service though. I sat beside my mom while my dad was performing his duties as an usher. I remember as a kid, we always looked forward to eating at our favorite places right after Sunday service but I quit going to church when I went to high school.

I went for brunch with my parents at my dad’s favorite kampua place after that. The kampua is quite different from Sibu’s normal kampua. It’s somewhere in between kampua and kolo mee. This is the part I miss the most, spending quality time with my parents! 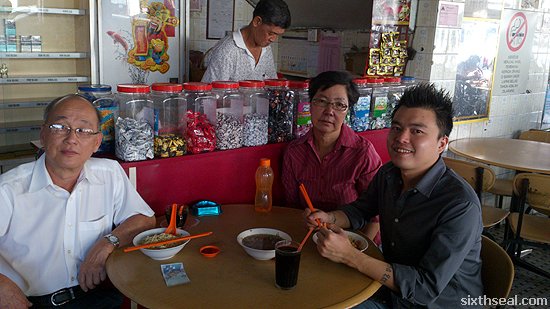 I got my mom and dad batik from Jakarta and we’re going to have a nice sit-down dinner later to celebrate Father’s Day.

Do I consider myself a religious person? No.

I’ve not stepped foot in a church for years. However I am quite well versed with the Bible, having read the scripture twice during an unfortunate time when reading material was not readily available. *cough*

However, something in Bali made me realize that I *do* believe in the Christian God. Yes, a kafir like me. I am not an “agnostic atheist” – not deep down in my heart where the id reigns supreme and the ego has no place.

I don’t know if this is going to be one of those temporary religious moments. I’m not an evangelistic Christian. I see no point in publicly announcing my return to the flock – another lost soul saved, Lord be praised.

Do you see the irony in that last statement?

However, I do believe that religion has a place in our lives. Call it the opiate of the masses if you want.

I was raised as a Methodist so going to church till I was 12 during my childhood formative years might have something to do with it.

It’s a personal thing, this religion business. I think I helped my family to be strong in their faith, despite having next to none myself (this is slowly changing).

God works in mysterious ways. He helps us, guides us and tests us when we stray from the path he has designed for us. I was blind to the little things that probably made my life a helluva lot easier (and longer) – attributing it to luck, skills, or experience.

I believe the hand of the Lord guides us when we need Him. This can happen subconsciously (see formative years of Christianity) – a nanosecond of neurons firing, sending the message, Lord if you’re there I need you now. You probably aren’t even aware of doing that.

…but He answers. I have seen his work and I am humbled.

This Easter, let us give thanks to the Lord for all the small and big things he has done for us.