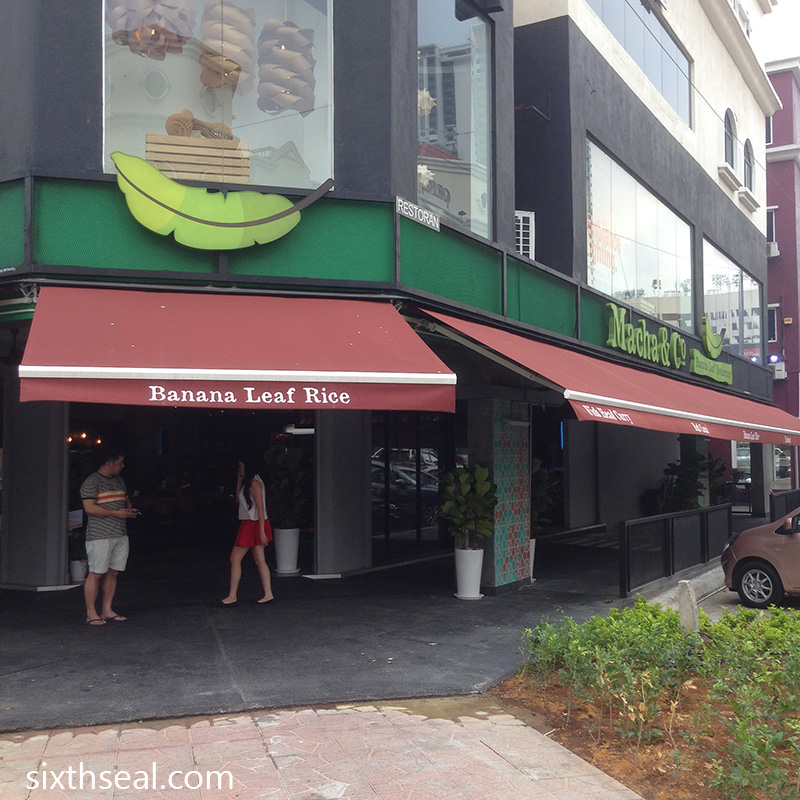 Macha & Co is the new place that just opened up in Kota Damansara a few weeks ago. I live across the street watched the renovations with interest. I was just talking about it with my better half last weekend. The restaurant serves banana leaf rice, which adds another halal option in addition to Sari Ratu Prima. I decided to pop in and see what they’re all about. 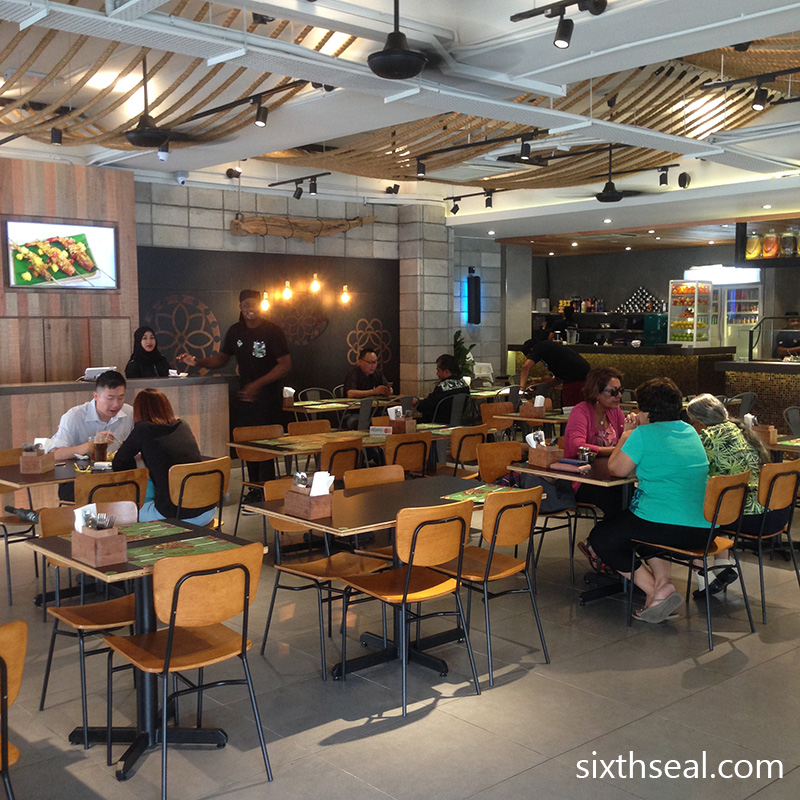 I actually spilled all the fork, spoons and serviettes when I was eating here. The tables were a little close to each other and I was slightly clumsy and bumped into the next one, bringing the utensils crashing to the floor. The waiter had to clean everything and replace the tissues but he did it with good humor. 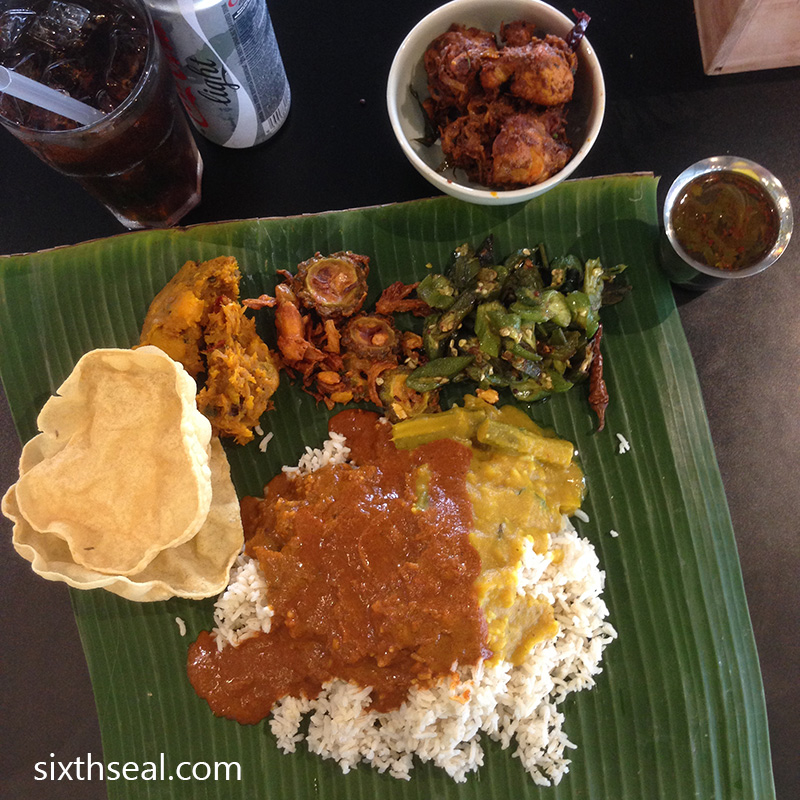 This is the Banana Leaf Set Meal (RM 9.50). It’s the main dining option here and includes white or brown rice with 3 vegetables, 2 papadams, fried salted dried chilli, acar, rasam and curry/dhal. Banana leaf rice is usually a completely vegetarian meal by default. I like the peratal pumpkin and the deep fried bitter gourd. 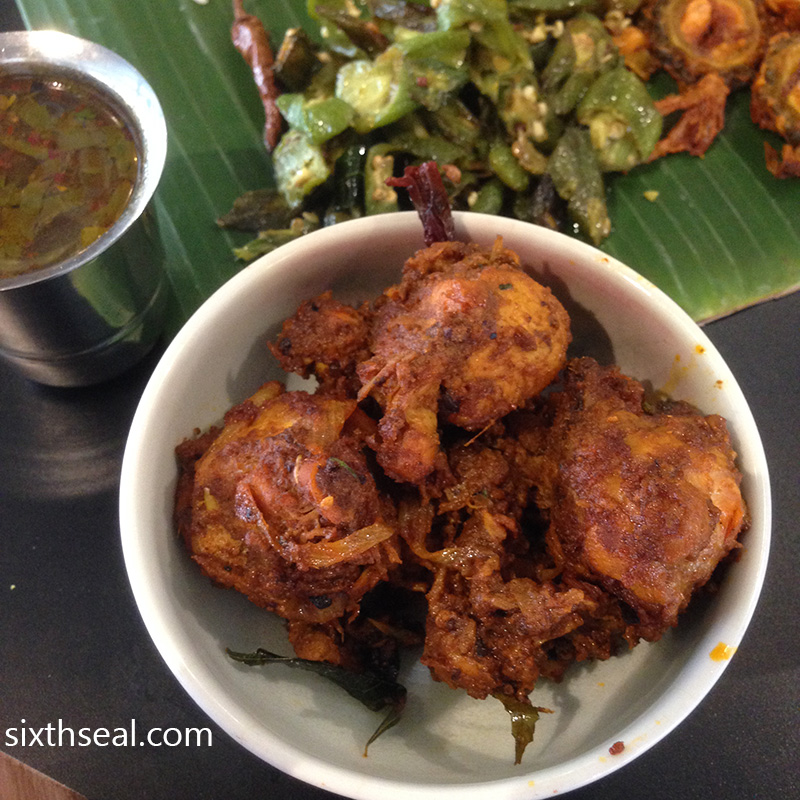 You can also order from a wide menu of tavams. I assume tavam means sides. They are various vegetable tavams, dry spiced tavams, curry tavams, seafood tavams. I went with the Varuval Chicken (RM 6.50) coz I like eating my rice with meat. It’s quite good. They also have more premium sides like Fresh Red Snapper Head (RM 68) and Black Pepper Peratal Crab (RM 22.50). 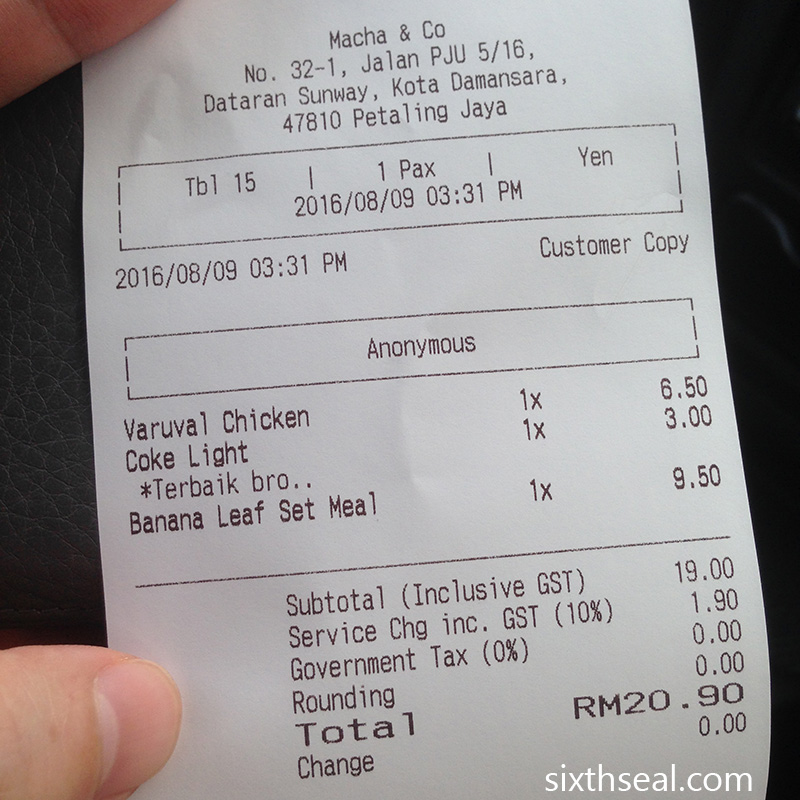 The wait staff here is very friendly. I ordered a Diet Coke and they added a line which said “Terbaik bro” (The best, bro) to the bill. I thought it was funny but a little dangerous to have this system. I read about servers calling customers fat, racist names or other misc slurs in the United States appearing on the news. I used to work as a waiter in Melbourne so I know the kind of humor the restaurant industry has and I don’t think it’s a good idea to make custom order lines (that’s what its actually for) visible on the receipt. 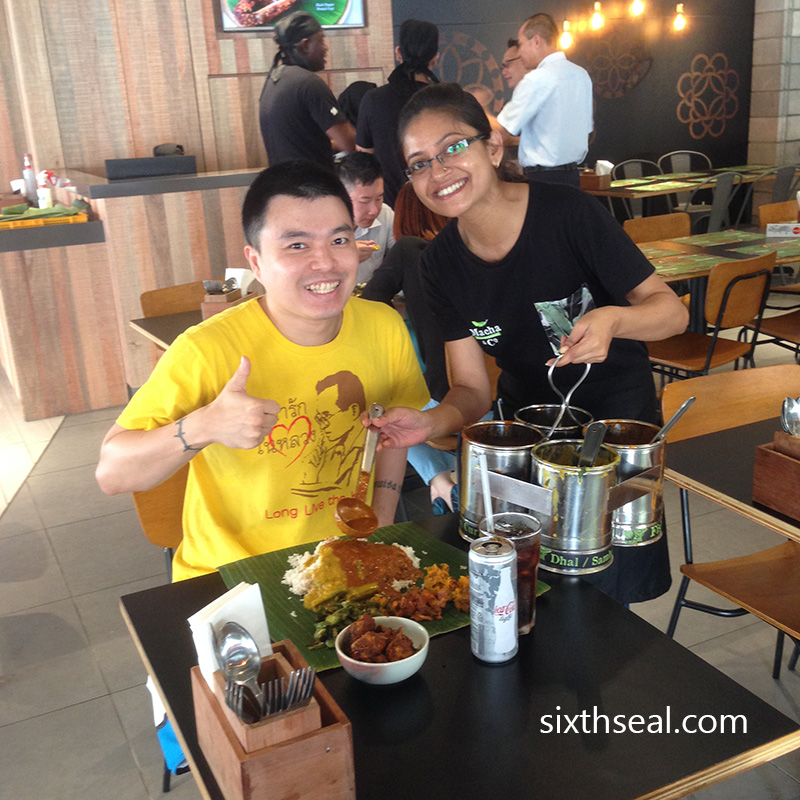 Macha & Co Banana Leaf Restaurant also serves other items like roti canai goreng but their signature menu is banana leaf rice. The lunch cost RM 20.90 inclusive of drinks. There’s not a lot of people here yet, probably due to a combination of factors – parking is a problem and this area is predominantly Chinese. It’s located in Dataran Sunway so there’s a lot of competition and the F&B turnover is quite insane…for instance, both Flaming Melt and Sabah Kampung Beef Noodles has closed since we went. It’s pretty good though, I’ll be back to try the other items! 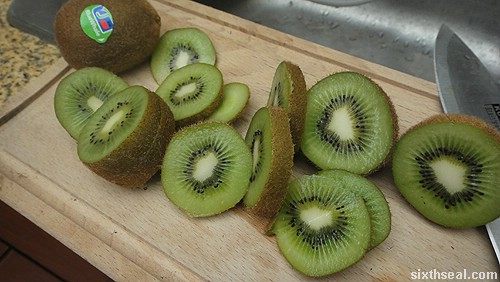 My girlfriend bought a lot of Kiwi fruit weeks ago – there were 8 of these French green kiwifruits and she’s eaten only one during all that time. I’m not a fan of fruits in general so it remained uneaten for several days. 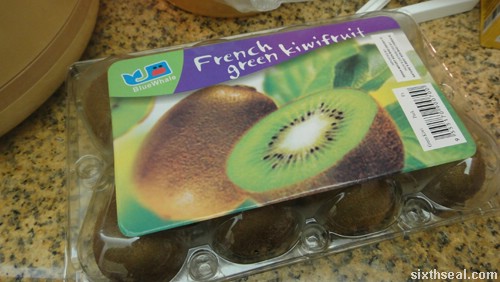 I noticed the furry little things in the fridge during the weekend and thought it’ll be a waste to let it rot. I decided to remedy that by cooking something that sounded good – Kiwi fruit rice! 🙂 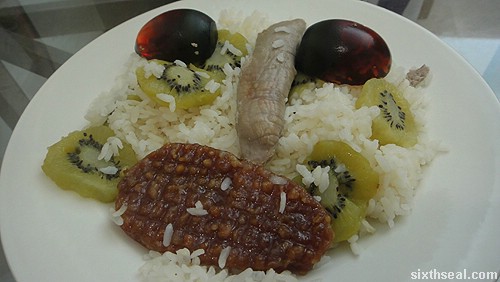 It was the perfect solution! 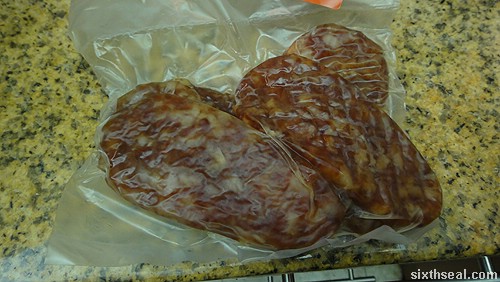 Yes, this is another variant of my preserved meat meals. Heh! However, I decided on going for presentation this time – I’ll make a smiley face out of this sweet and savory meal! 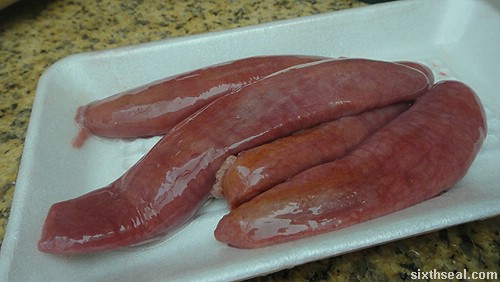 I used 3 kiwi fruits and sliced it into circles. 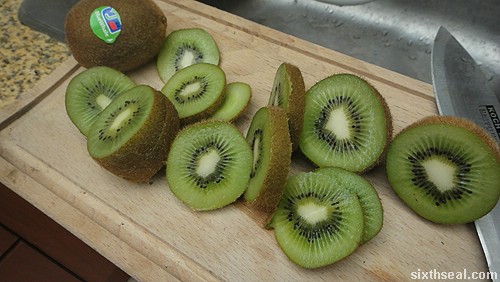 That was a mistake. I should have peeled it before doing so coz it became rather hard to remove the skin after slicing. 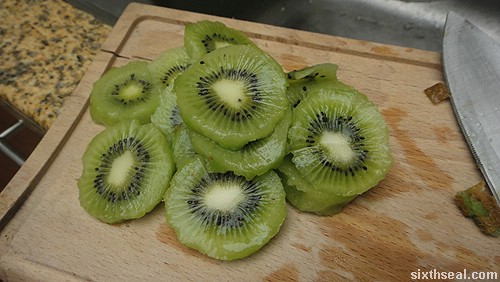 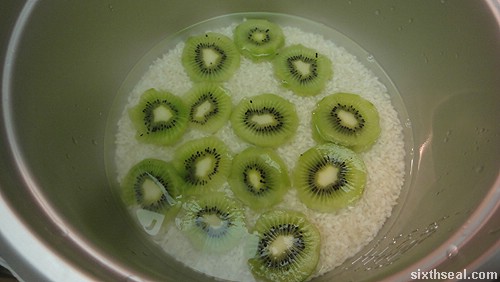 Anyway, I mixed 2 cups of rice with 3 kiwi fruits, one lonely fish roe and a piece of waxed meat before turning the rice cooker on. 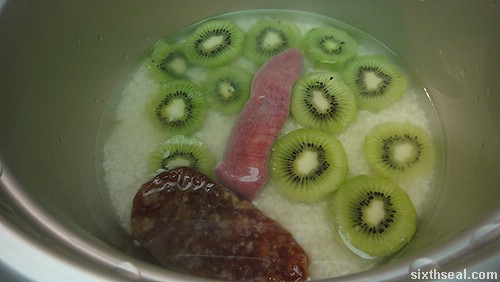 That’s the beauty of this – there’s no additional cooking needed, everything is done by the rice cooker. 🙂 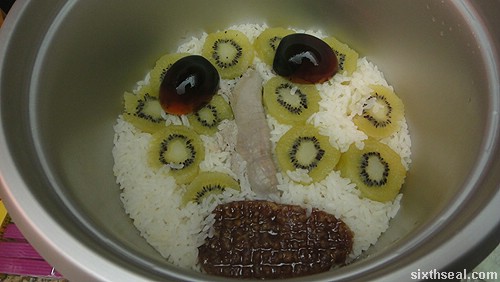 It was ready after 10 minutes. I originally made it to look sorta like a face but then I realized I could make it look MORE like a face by arranging the fish roe as the “nose” and the waxed meat as the “mouth”. That leaves the “eyes” – century eggs. 😀

The finishing touch was some fresh yoghurt – this is the plain unflavored ones, don’t use the flavored ones, it’ll ruin the taste of the dish. 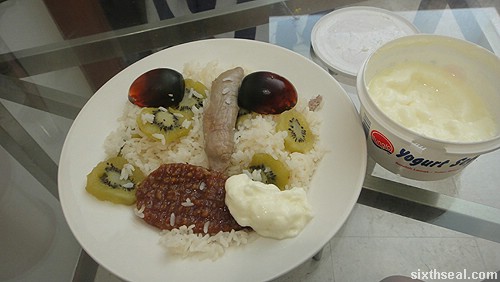 I dabbed a generous portion on the waxed meat “mouth” to look like it was drooling. Food is all about presentation as well. 😉

I took a tentative scoop of rice… 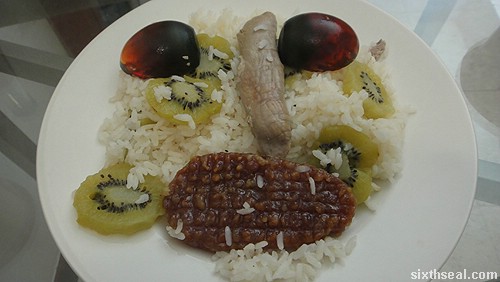 …and was amazed. The fruity citrus tang of the Kiwi combined with the sour yoghurt and rice tastes exceptionally delicious! It’s very refreshing! It’s tastes like…a beach holiday with the warm sun on your back and the cool breeze from the sea coming in.

It tasted like what an oasis would seem to someone wondering in a desert for 2 days without water.

The waxed meat and fish roe provides a savory twist to it. I ate one mouthful of the kiwi + yoghurt + rice and alternated it with waxed meat + fish roe + century egg + rice. 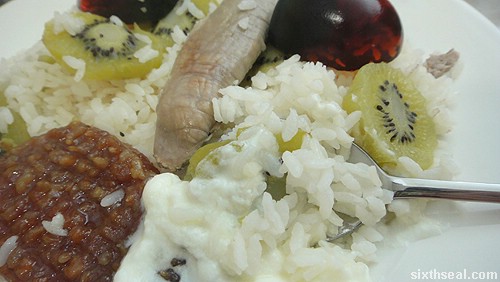 It’s like having a main and a dessert in one dish!

It is surprisingly good, I kid you not! Let your adventurous palate roam with this unique dish and check it out for yourself. 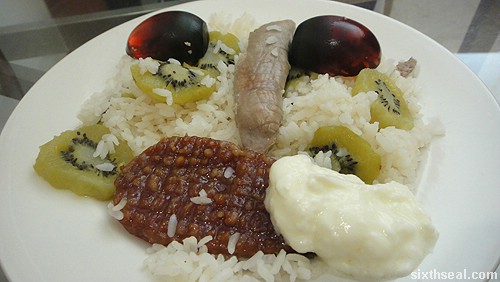 You can also forgo the meat and just cook Kiwi fruit rice and pair it with yoghurt for a dessert dish – I’m sure it’ll taste equally good. 🙂 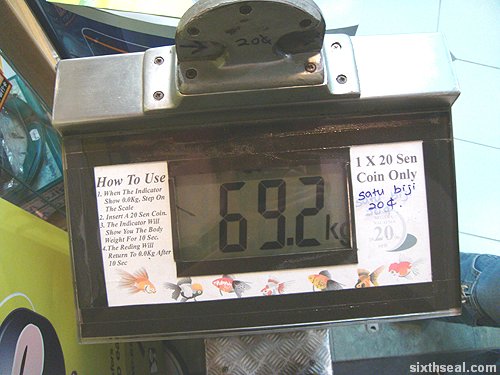 I just weighted myself at a weighing scale and noticed that I am now clocking in at a rather  respectable (?) 69.2 kg. 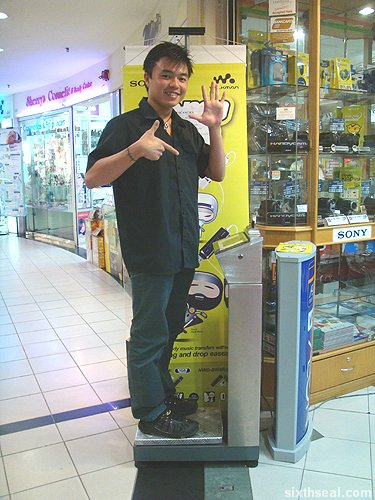 This is approximately a 10 kg increase from my previous weight (before rehab) and I had a friend relate to me how gaining 10 kg actually feels, but since it’s so subtle and nefarious you don’t actually realize it. It’s called The Rice Theory (TM).

The Rice Theory (TM) was related to me during dinner just now by my friend who watched me binge on food and then went with me to the mall for the weighing machine and it goes like this: 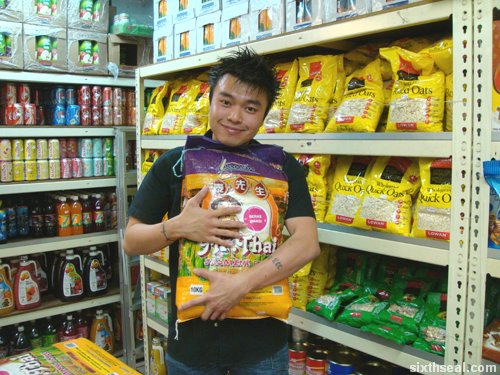 Pick up a 10 kg bag of rice from your nearest mall and try lugging that around. Imagine yourself carrying that 10 kg bag of rice. The. Entire. Day. Everywhere you go. 24/7. That’s how gaining 10 kg of weight feels like. 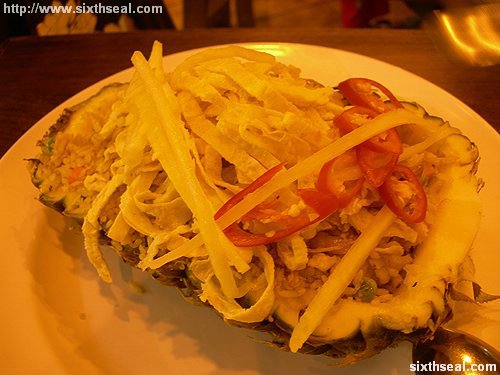 Pineapple rice is fried rice with pineapple served in a half a pineapple. 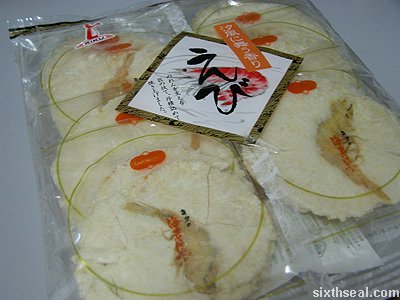 I was interested to find out that this shrimp rice cracker actually
has a whole shrimp inside it. Usually, rice crackers only have
flavorings, but these ones are different – the contents actually lists
shrimp and it is fully visible through the rice cracker. 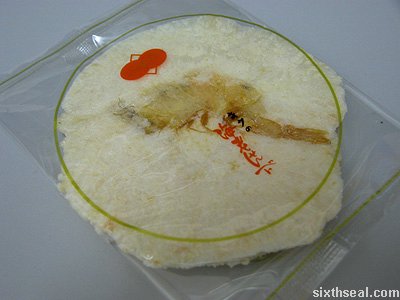 There are two rice crackers in each individual pack, so it’s good for snacks on the go. 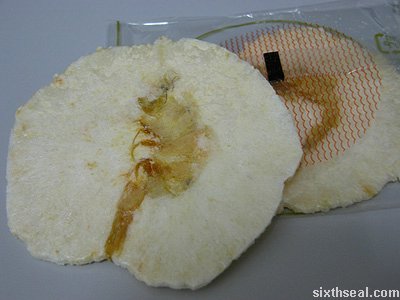